We knew this was going to be a big day but just how manic it would turn out to be didn't really dawn on us until we were in the thick of it.

It started at silly o'clock when we headed off to get the train to London.

The first stop of the day was at the first ever  Alzheimer's Show.  I never speak from notes because if I lose my place I panic, so I just have some key points in mind and then speak around them.  This time however there were some very important points I wanted to get across to the audience and so I'd made myself some notes which I read and re-read on the train and then didn't look at all during my talk:

- The Alzheimer's Show can only be considered a good thing as anything that brings dementia into the public eye gets my vote and it gives me hope that the stigma attached to mental illness and old age is waning.  It is, however, a reflection of the failure of the powers that be to provide for people with dementia and to address their needs, both mental and physical.

- 17 years ago when my mum was showing signs of dementia there was a lack of diagnosis and also there was an awkwardness surrounding anyone with a mental illness so it was only spoken about in hushed tones, as if if was something to be embarrassed about.

- I was so horrified at what happened to my mum that when I found out that research into the causes of dementia was vastly underfunded I just had to speak out about it.  Which is what I'm still doing 8 years after her death.

- Our society is so disjointed nowadays that many sufferers don't have any support from family either due to the constraints of proximity or time.  I am saddened that many older people describe themselves as lonely and or afraid.

- As Social Services try to do more to enable sufferers to stay in their own homes for as long as possible I worry as, having seen my mum's decline, I firmly believe that what slowed the development of her disease was her interaction with myself and my husband.  I can't imagine how dreadful it would have been for her if she had been left on her own to muddle through a world that no longer made any sense.

Then I  would tell my mum's story and if there was any time left I'd talk about my fund-raising activities and answer questions.

The show was held in the Horticultural Halls, near Victoria station so we had a nice walk there from the tube station.  As always we arrived in plenty of time so we headed off to the nearest cafe for a caffeine hit. 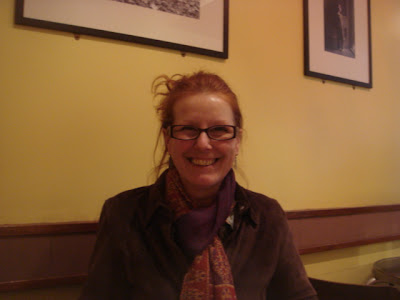 There was a good variety of stalls there ranging from Alzheimer's Research Trust, the Alzheimer's Society and support charities through to a company manufacturing play things for the elderly (not as whacky as it might sound as they had jigsaws with more adult pictures on them and large pieces for arthritic hands).

The main lecture theatre was in a large room and this was where healthcare professionals, researchers etc gave talks.  The small 'theatre' where I and fellow supporters would speak was in the middle of the hall with some chairs laid out in front of a large screen.  It was obvious that there were going to be issues with the sound as the background noise from the crowd was very loud.

Mick Moody, a fellow Champion of ARUK, was speaking after me and he gave me a good luck hug.  Mick's wife, Elaine suffered from early-onset Alzheimer's at the age of 52 and sadly she died in March this year aged just 59.  Mick and his 2 sons continue to raise money for ARUK and to tell Elaine's story.  It must have been very emotional for Mick to speak out so soon after her death. 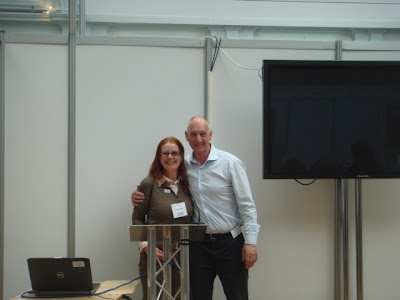 Mike had been busy putting out a little flyer on each seat giving details of my talk, mum's story and my latest fund-raising efforts and it was good to see everyone reading it beforehand.  I always remember what someone told me about giving a speech - open by telling people what you're going to tell them, tell them,  and then tell them what you've told them!  That way your message is reinforced all the way through.

I was the first speaker and so I was the guinea-pig in terms of the sound levels!  After a few adjustments to the microphone we managed to get the sound right or as right as it could be.

For the first part I showed a slide of 2 photos of mum so people could relate to her story. I'd tailored mum's story to my audience as I thought that the people attending would be those who are probably experiencing losing a loved one to dementia. 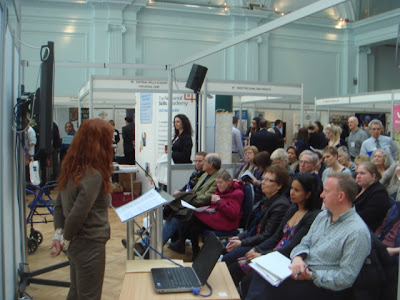 With that in mind I had divided mum's story into 3 stages; the early stage where we could laugh about and make light of some of the strange things that were happening (eg forgetfulness, putting her glasses in the fridge and the milk in the breadbin), the middle stage where she became very depressed and frustrated because nothing made sense any more (this was the worst stage for her as she was still aware that something was wrong but didn't know what) and then the final phase when dementia had taken full control of her (she had psychotic incidents and became violent and aggressive and the physical consequences of the disease took over - this was the worst stage for us as her carers). 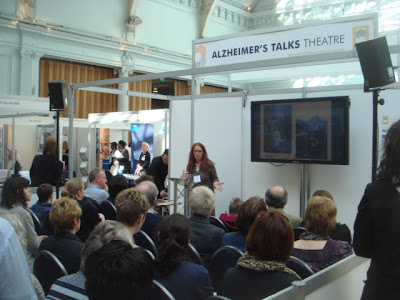 I also spoke about the perceived wisdom of the so-called experts, eg correcting a sufferer if they get confused over everyday things, and how in our experience it only made matters worse.

The example I gave was when mum came upstairs to tell me that my steak and chips were ready and I should come down for my meal.  This was wrong on so many levels - I'd been vegetarian for 20 years, I've never liked steak and chips, it was 9:30am and mum hadn't been able to use the cooker for about 5 years.  I knew that if I'd corrected her she would have become upset and confused so I just told her that I'd be down straight away and she went back downstairs quite happily and then forgot about it immediately. 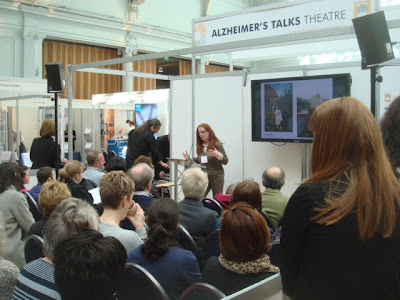 Not only were there people sitting down in the theatre area, but people stood around the edges listening.

I always find it difficult talking about the time when mum went into the nursing home for the last few months of her life so I was quite relieved when I was given the 5 minute warning and I could move on.

I finished with a slide of me running and knitting to lighten the mood and show how I am trying to raise money for research into dementia as well as speaking out about it. 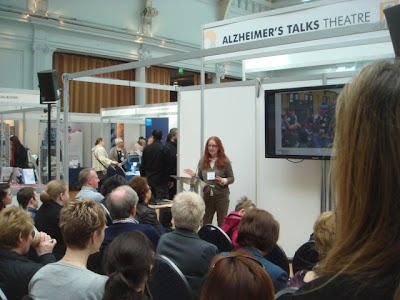 I spotted a few more ARUK Champions too.  This is Carol Franklin-Adams whose husband Patrick was diagnosed with early-onset Alzheimer's in 2004 at the age of 59.  Together they have raised thousands for ARUK. 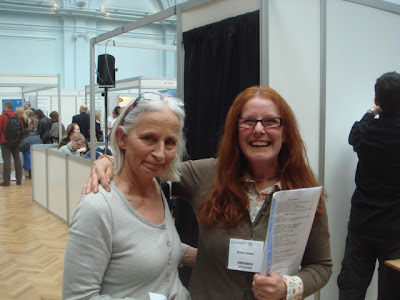 The lady with the pink jacket is from http://practicalalzheimers.com a website providing information about Alzheimer's together with patient experience and medical opinion and she asked if I would mind her putting details of mum's story on the website. 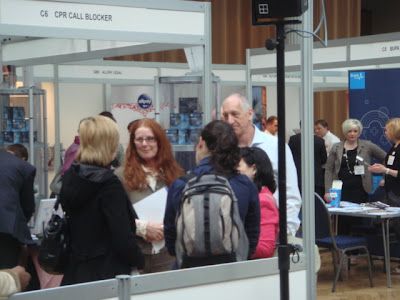 Then I had a quick chat with Tim, head of communications and public affairs at ARUK, and Simon Ridley, head of research.  I'll be seeing Tim next week at the next meeting of DeNDRoN so we needed a bit of a catch-up.

By the time we left we had just 2 hours to get over to the Excel Centre to the VLM exhibition to collect my running number and then get back to Tower Bridge for Frantic Friday part 2!