Feeling a bit sorry for myself as I have all but lost my voice. It started with a coughing fit one evening early last week. The next day I sounded like Darth Vader and I thought it was just asthma-related. I took part in a telephone conference call during which my voice kept going up an octave to squeaky heights and then down to bass baritone. In the high bits, my friend said I sounded like Donald Duck (ratbag!).

I thought it was just an allergic reaction to something but here I am nearly a week later, still with a hacking cough and the tiniest voice imaginable. Some might say that's not a bad thing! The worst thing is Mike has banned me from running until it clears up and although I know he's right it's still frustrating to be grounded and I'm being dragged to the quack tomorrow. Deep joy.

Anyway, it's an ideal opportunity to crack on with some Christmas charity knitting and crochet, although I can't share it on here, and catch up with some recent photos. What I can show, however, is my finished cowl, Cochal, from the 7 Skeins Club:


Kate's design used 2 main colours with a single row of the red but I wanted to use all the colours to make a nice bright contrast against my dark navy winter coat. It's a simple stitch and a quick knit and I'm really pleased with the result. I also wanted to conserve each shade of yarn so I had choices for the fingerless mitts and hat.

Cochal is the Scottish Gaelic word for hood and the cowl is made extra deep so you can pull it up over your head if need be. I've already worn it once when it was windy and pulled it up to cover my mouth and ears and it was jolly snug. I'm going to make one for Mike too but using a more restrained and manly palette.

I've been busy with end of year preserving and thought I'd try making some Quince jelly as I've never made it before. There was a huge crop in the Community Orchard in the village. Just look at the size of these fruits: 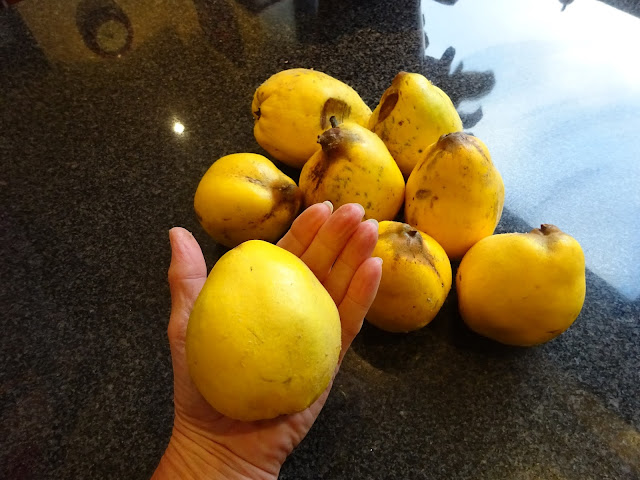 They have the most amazing perfumed smell. I don't know how else to describe it as it doesn't remind me of anything else I know. I just did a basic jelly preserve by chopping the fruit into chunks (they are very hard so you have to be careful), covering them with water then boiling them until they were soft. 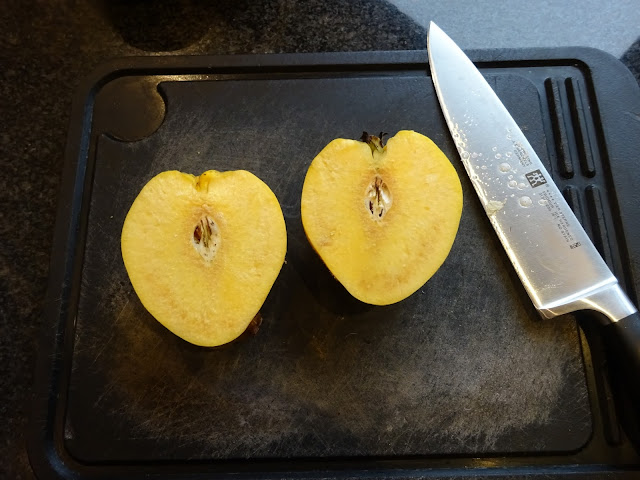 Then I strained it through a jelly bag and used the basic formula of 1lb of sugar to 1 pint liquid. As the fruit was very ripe and juicy I added the juice of a lemon to help it set. 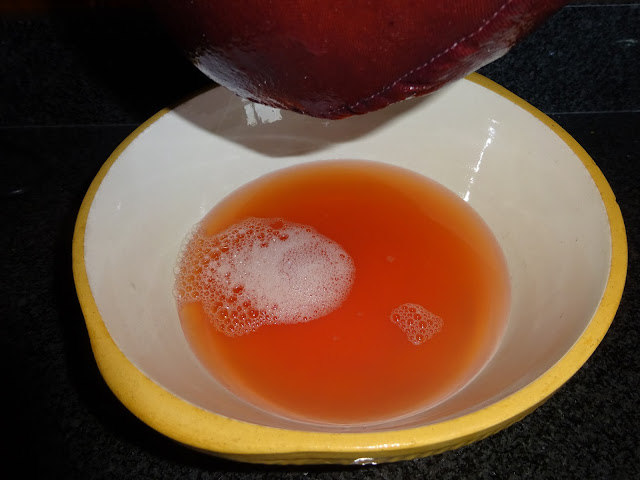 The colour reminds me of crabapple jelly except it has retained the perfumed smell. I've heard that adding a bit of quince to stewed apple can transform it into something amazing so I shall try adding some of the jelly to see if we like it. I tried it on toast but wasn't keen on it like that. Next try will be with cheese.

Before I became lurgified I'd been enjoying the colours of Autumn so here are a few shots from my runs:


Mike's now given me 2 more days of being lurgified before I get sent to the Quack. I'm hoping I'll have recovered by then, especially as I've got 3 marathons coming up soon………which reminds me; I've got 4 more marathons to run this year and if I manage all of them then I'll have completed my 60 by 60 challenge with 18 months to spare.

My next, and most challenging, fund-raising effort will be announced before Christmas.
Posted by Susie Hewer at 6:45 AM

Hi Susie, There were beautiful smelling quinces in the garden of the last house I lived in, but never as big as yours.
Love your autumn tints pictures. Someone said they were more colouful than ever this year - but I think we say that every year!
All the best