All Kinds of Everything

There is soooooo much to catch up with and some things will have to go by the wayside or I'll be spending all my time blogging rather than doing things. This will most likely be a bit of a mishmash!

A bit of light knitting


Yes, there has actually been some crafting going on but this has not been a straightforward project even though the pattern is simple as can be. It's the Houlland shawl pattern from Kate's Book of Haps and it certainly won't be the last shawl I knit from that book.

It started with a simple edging strip which I worked up really quickly. Then you just pick up the stitches for the body of the shawl through the back of the long edge.

It's a nice geometric pattern and I enjoyed watching it grow. Well, I enjoyed it until we had a bit of a blip in our lives which involved many visits to the doctor and lots of waiting around in hospital corridors during which I chose to knit. But although it served to distract me from what was happening it showed the extent of my stress as I had to undo the first 15 or so rows many, many times and I thought I would never ever get through it - I should emphasise that it was not that the pattern was complicated it was just that I wasn't concentrating. The yarn was not the easiest to undo either as it's an alpaca/wool mix (SMC Select Highland Alpaca fino) so rather sticky and hairy!

I also had to pull out of 2 marathons which meant a bit more stress trying to reorganise my 100th.

But we got through it and everything's OK now, thank goodness, including the shawl. After I'd calmed down I finished it off really quickly.

A couple of months ago one of our neighbours popped round to ask if she could put 4 of her brood mares onto one of our fields for a few weeks whilst their foals were weaned. She breeds race horses and apparently if the mares and foals are separated but can see oneanother then they try to jump the fence or get very agitated but if they can neither hear nor see eachother then they get used to the new situation very quickly. As we are far enough along the lane for them not to hear a neigh it was perfect.

Our sheepy visitors had just left us so it was perfect timing. I knew they'd arrived when I saw Esther and Kizzy galloping across their field to the gate! 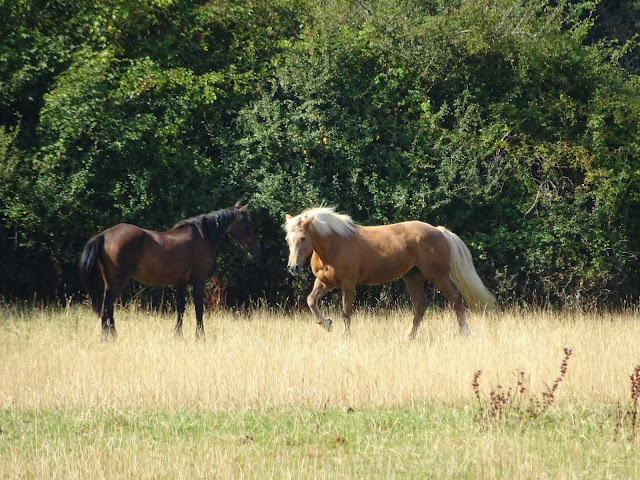 It was fascinating watching the dynamics of the new herd and although they were separated and Tarneem was in charge of her 3, Kizzy was definitely the matriarch of the whole group and was very vocal about it!


Little did we know were were going to see a re-enactment of Love Story though. Whilst 2 of the group had recently given birth and the other one was in-foal (with a massive tummy!), My Pretty Girl (MPG) had not produced a foal this time and was just coming into season.


That set the scene for the next 8 weeks with Esther and MPG having love-ins either at the gate or down by the stile at the bottom of the field. Every so often Kizzy would get cross and charge over to separate them but we literally had to prise Esther away each evening to put her in the shelter - things are complicated now as Kizzy has no viable teeth and so has to have a bucket full of chopped and soaked feed at night and as she hates being shut away we have to shut Esther in so she doesn't pinch any of the food.

The 4 visitors have gone back home now and although Esther didn't fret, she does keep grazing down by the stile just on the off-chance that MPG is there, bless her.

Meanwhile, the ducklings have grown. I chuckled as I watched the relationship between Tilly and Mrs Duck as there seems to be an unspoken rule that cats and ducks don't mix. 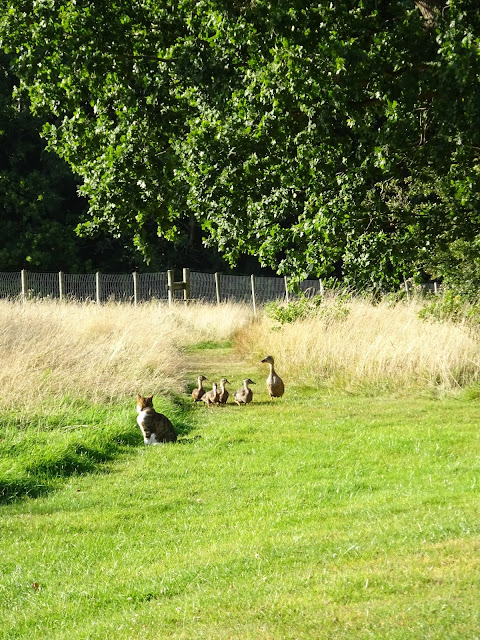 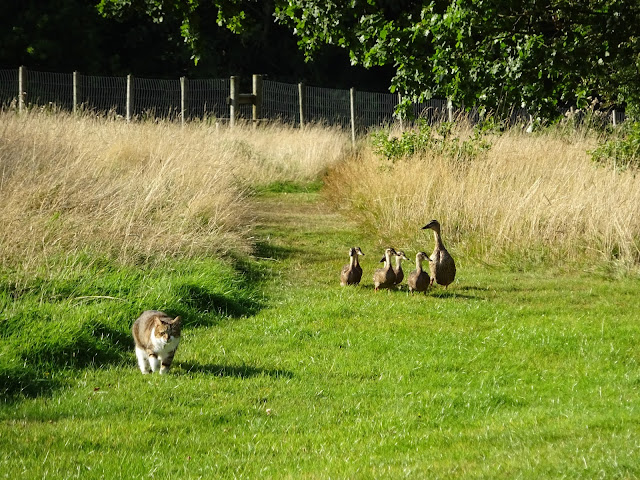 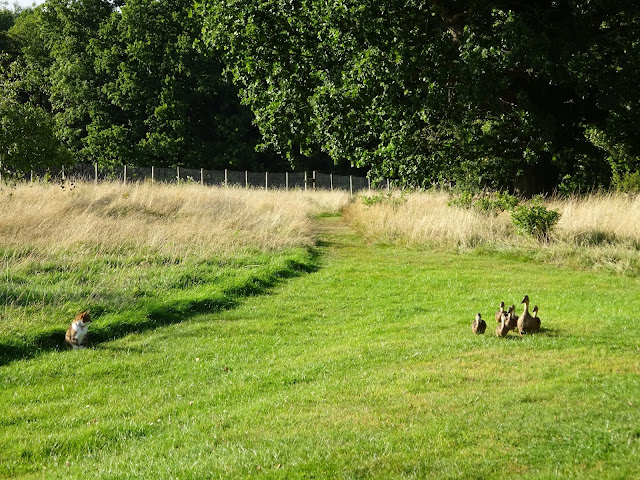 Shortly after this was taken, we lost one of them. I saw a buzzard flying low near the pond and heard Mrs Duck making a commotion so went running down there but was too late to save the duckling. I thought they were safe as they were nearly fully grown, but sadly they were not.

Then we had the orchards and lower paddock topped. We used to scythe it all ourselves but I have neither the time nor the inclination at the moment so we got the tractor in to hasten the work. 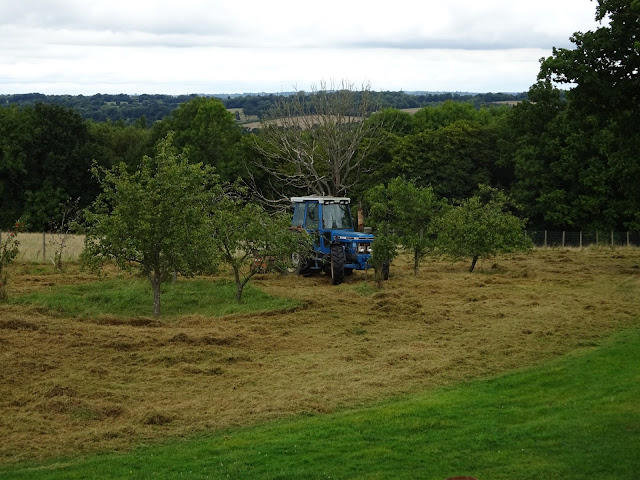 We did, however, have to rake, gather and turn it as we use it for bedding. That burned off a few calories I can tell you! 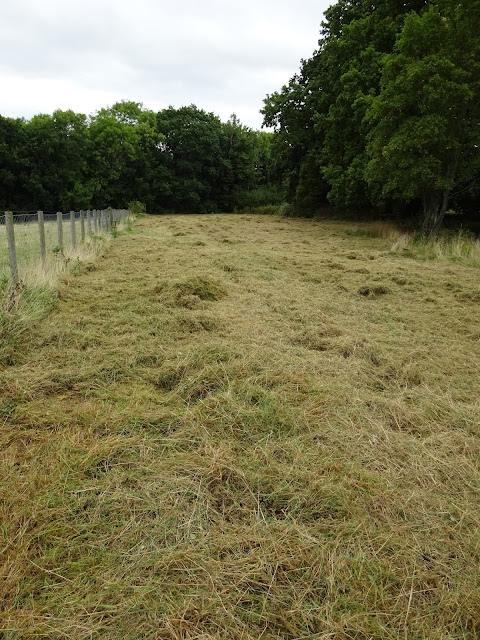 Whilst I was raking I discovered this little fellow who had been disturbed but thankfully was safe and sound. He's a Natterjack Toad and I was fascinated to see that his colour had changed to better match his surroundings. 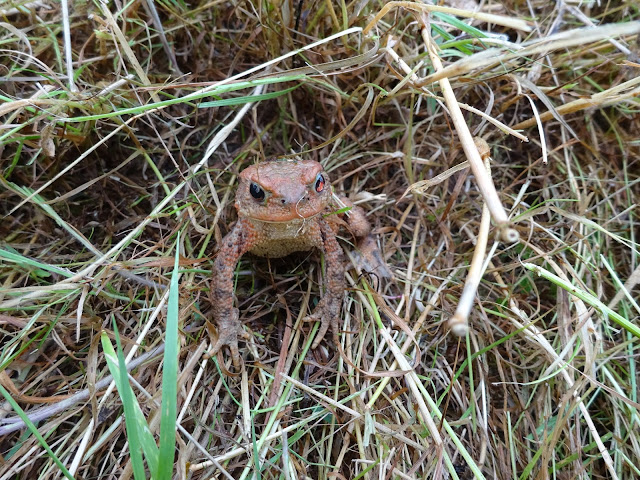 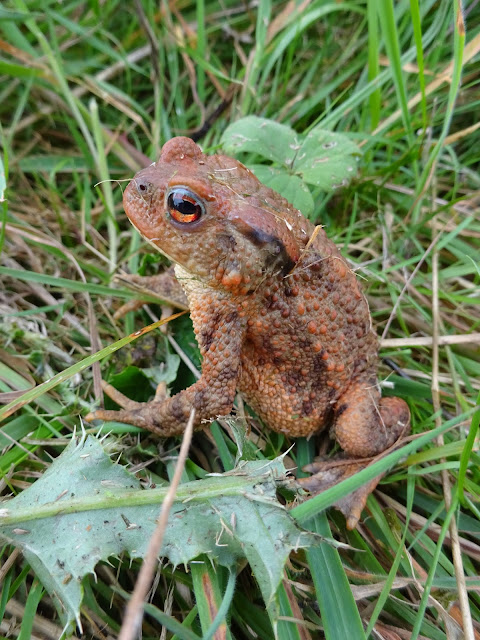 It was fascinating seeing the variety of wildlife underneath the sward - there were vole tunnels everywhere and once they had been uncovered there was lots of interest from all quarters:

There so much to do in Autumn as we get ready for the bad weather. I had to give the barn a good clear-out ahead of the hay delivery and dismantle the polytunnel (I have a cheap and cheerful one which I take down each year as it would get blown away otherwise).

Inevitably I discovered some guests who needed to be helped with their house move - I love the different markings on their shells. They were relocated to the bramble/tile patch where the dormice and newts live. 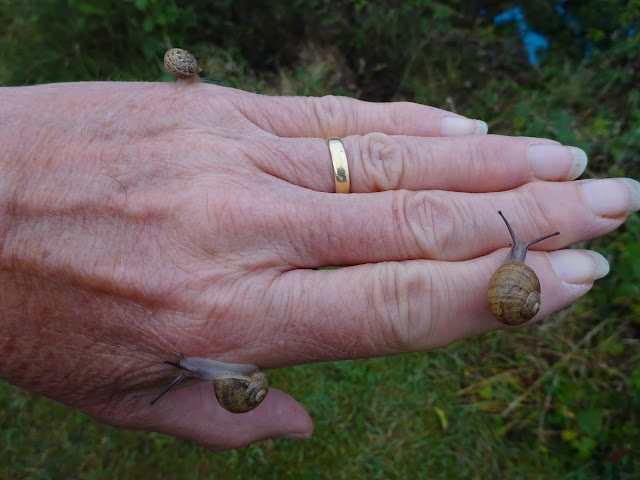 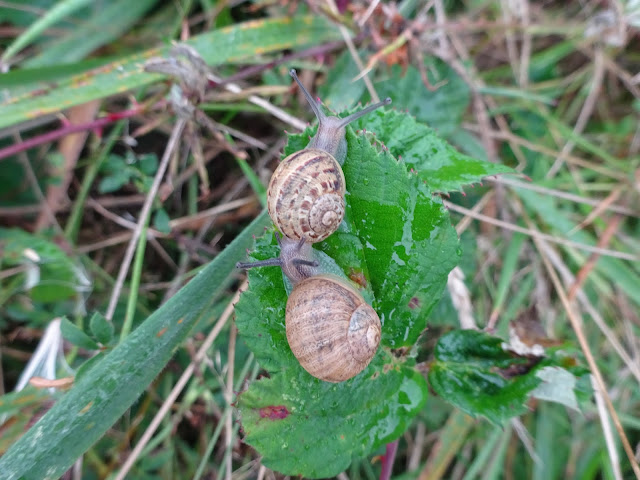 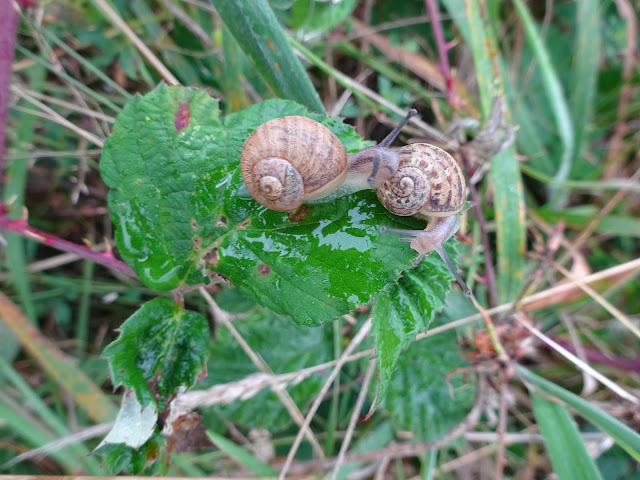 I was fascinated by the beautiful markings on this spider. Those on his back resemble eyes or a face  which must be to confuse any predators. 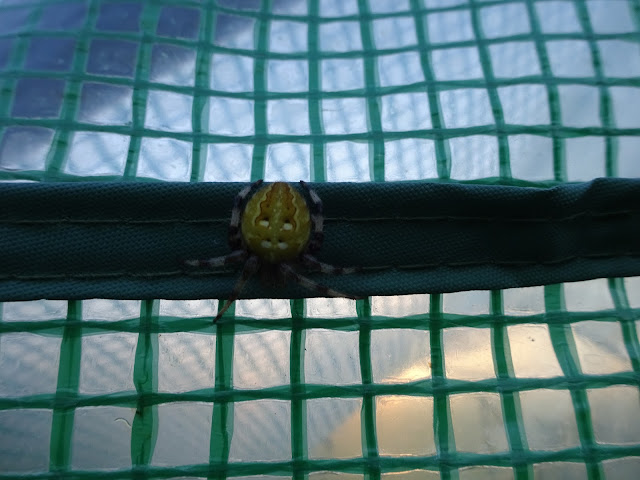 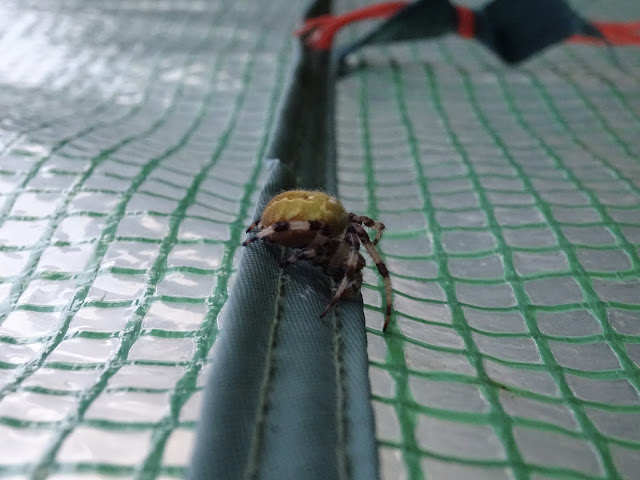 The last remaining vegetables were turned into a very satisfying roasted ratatouille using a recipe from Hugh Fearnley Whittingstall's River Cottage Veg Every Day which is my favourite recipe for ratatouille. There are still plenty of chillies but they've come indoors to finish ripening. 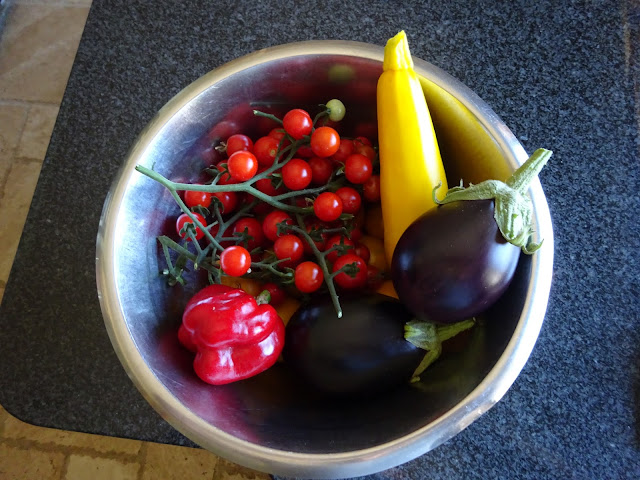 We've also had some amazing sunsets recently and this was my favourite: 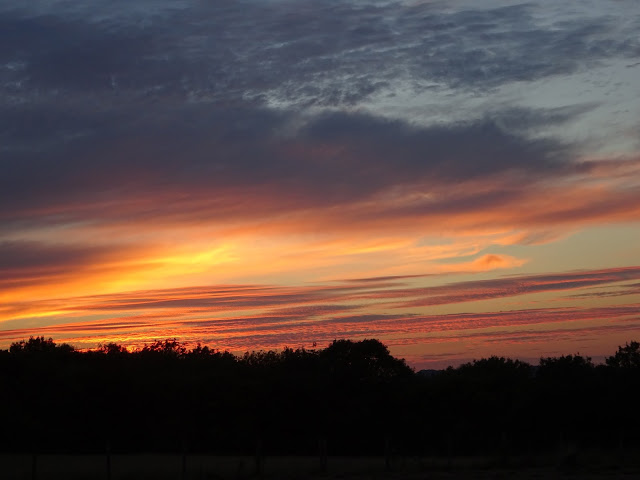 As I found myself marathonless for a couple of weeks I made good use of the fine weather and headed out across the fields into the valley several times and I was delighted to be treated to some amazing colours across the fields, just before the trees started to turn colour (see how far behind I am - the leaves are nearly all gone now!) and I spotted a young fox practising his stalking and a pretty duck hiding amongst the reedmace along the river. I've missed my long runs around where we live. 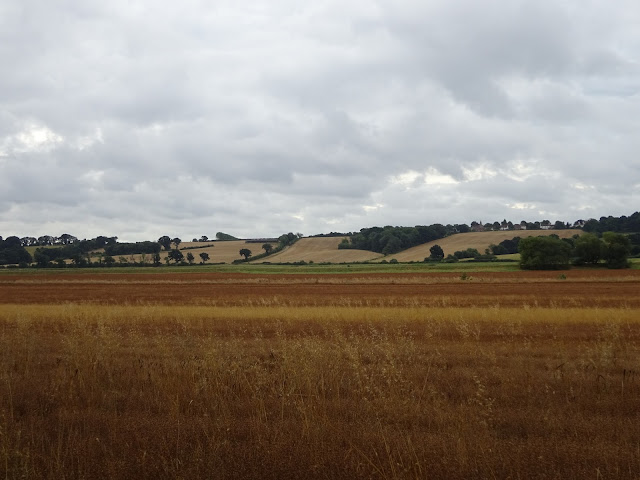 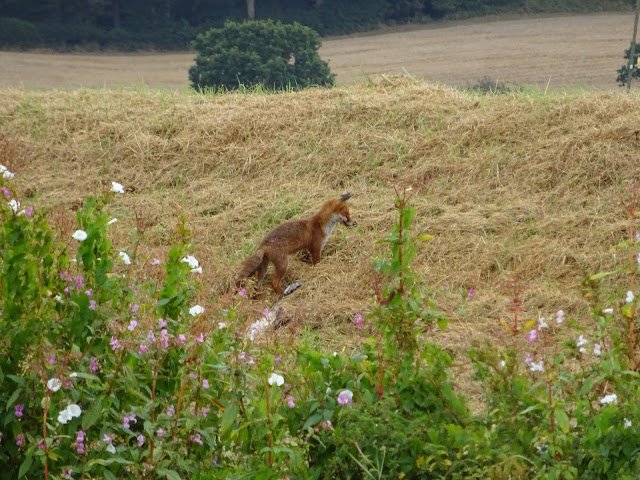 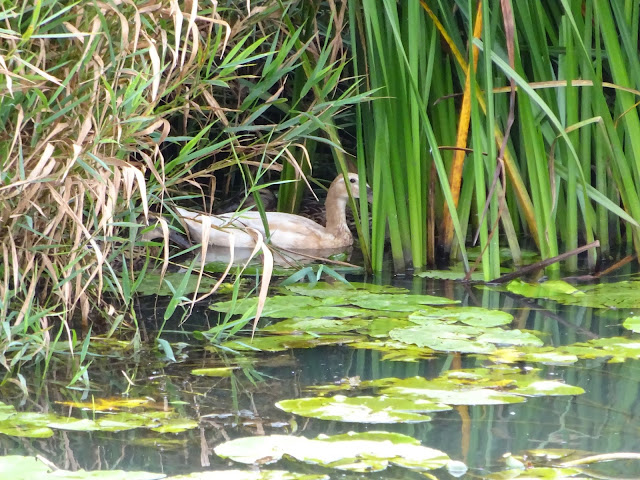 Mike and I decided to celebrate my 100th marathon with a visit to a wonderful restaurant near home. On the day itself all I wanted to do afterwards was get home, have a bath, then drink champagne so a few days later we headed off for a treat.

There was something else to celebrate too - I won a prize a few weeks earlier in a competition draw from Hobbs London. It was one of those random number type draws where you say why you want the prize and you think no-one ever wins so I was flabbergasted when I got an email telling me I'd won the Albany dress!

I have a couple of Hobbs dresses which are reserved for special occasions and this one is a beauty and even better it isn't my usual colour choice so took me away from what I would choose myself as I steer clear of neutrals:

I have actually completed 2 more marathons in the last week but as this post is getting rather long I'll save my reports for next time.
SaveSave
Posted by Susie Hewer at 8:15 AM