Last week was amazing, or in modern speak 'totes amazeballs' (auto-correct didn't like that one little bit)!

To summarise, I have given several interviews, received a donation from a lovely lady I've never met who read about what I do and tracked me down, a wonderful friend has committed to make a monthly payment to Alzheimer's Research UK (ARUK), another friend who organises a charity concert each year has promised to donate the proceeds this year to ARUK, we're making good progress on the register (to be known as 'Join dementia research') with DeNDRoN (Dementia and neurodegenerative diseases network) to link patients/carers with researchers, my plans for the London marathon are falling into place and I've got my corporate sponsor on board (and we're gearing up for some great publicity, fingers crossed).


With regard to the London marathon, the wonderful people at deramores are supporting me again for which I am truly grateful. Although I'm already giving interviews about my plans the information is still embargoed until nearer the London marathon so I can't share anything just yet. I'm happy with how my plans are coming together and I hope it will attract lots of attention (fingers crossed anyway) for ARUK.

I've also been invited to ARUK's  Network Conference in a couple of weeks which is very exciting too. It's an annual event and brings together dementia researchers from all over the country. Jeremy Hunt,  MP and Secretary of State for Health, has been invited to speak at the start of the conference and ARUK have invited me along to be his understudy in case he cannot attend at short notice. I'm secretly hoping that he doesn't come as I'd love to address a crowd of scientists again.

The event is being held in Oxford which is quite a long way from home so I'll have to travel up the day before and will be attending a banquet the next evening. I'm sure a lot of the presentations will go straight over my head but I always manage to glean something from this type of event so am really looking forward to it.


After my 20 miler last weekend I had a grumbling pain at the front of my right shin. It's a condition known as a 'shin splint' and has probably been caused by having to do almost all my runs on the lanes. I usually do 60% of my runs across fields and trails which lessens the impact on my legs but this has been impossible with all the flooding.

The solution is usually to treat and rest the injury to let it recover - we runner's refer to this as Rest, Ice, Compression and Elevation also known as RICE. However, as I'm doing a running streak, i.e. running every day for 5 months, the 'rest' part has not been an option!

As soon as I'd got out of my running gear I went straight to the freezer to get my trusty bag of Tesco's value peas which has acted as my ice-pack for about 8 years. Well, the plastic bag had become so old and frail that it split and the peas went everywhere. After a few choice words I collected them up and stuck them on the compost heap. I then had to use a more quality product instead - very up-market indeed. Frozen peas make a cheap ice pack and are very effective as you can mold them around the injured area.
I elevated my leg for about 15 minutes and let the ice do it's magic. It really does help and when you've been running for a while you get to know instinctively whether an injury needs ice or warmth or even a combination of the two (which can help flush out any damaged tissue). I decided not to bandage it and just kept icing it twice a day for the first 5 days.

I still had to do my daily runs though and thankfully the weather was lovely last week so I managed to run a trail loop of 3.5 miles without encountering any flooding. The softness of the ground helped lessen the impact on the leg and it felt much better by Friday so on Saturday I ventured along the lane for 4.5 miles without any pain.

This was very reassuring as I needed to do another longish run the next day as it's only just over 2 weeks until my first marathon. So the next day I was up with the lark and out at 6am for a cross-country run of around 15 miles.

It was frosty down in the valley but when the sun rose in the sky it was so warm that I had to take my long-sleeved top off. 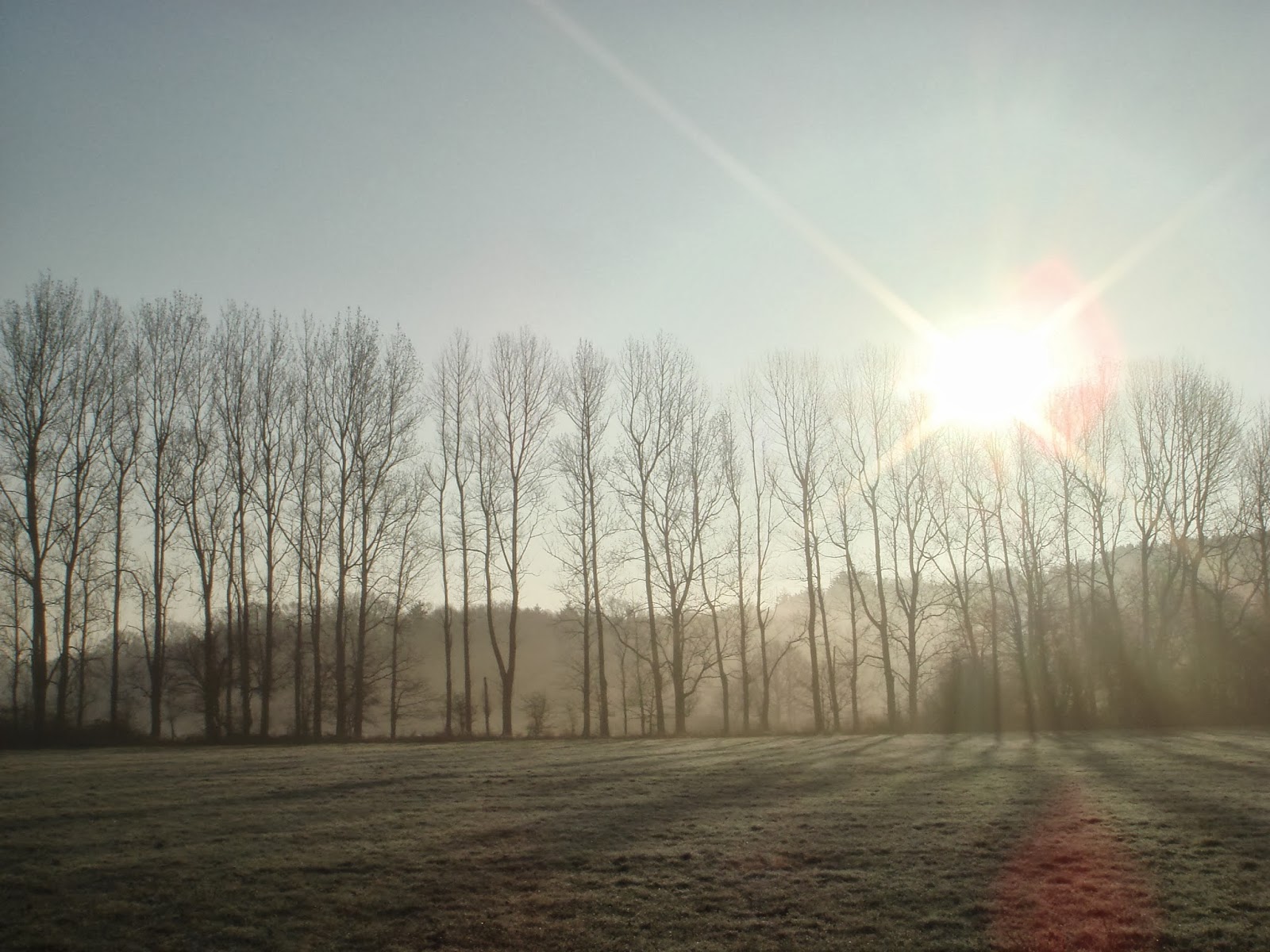 I'd decided upon an out and back route taking in the pretty village of Salehurst which often makes an appearance on my blog but as I got within 2 miles of it I encountered a bit of a problem: 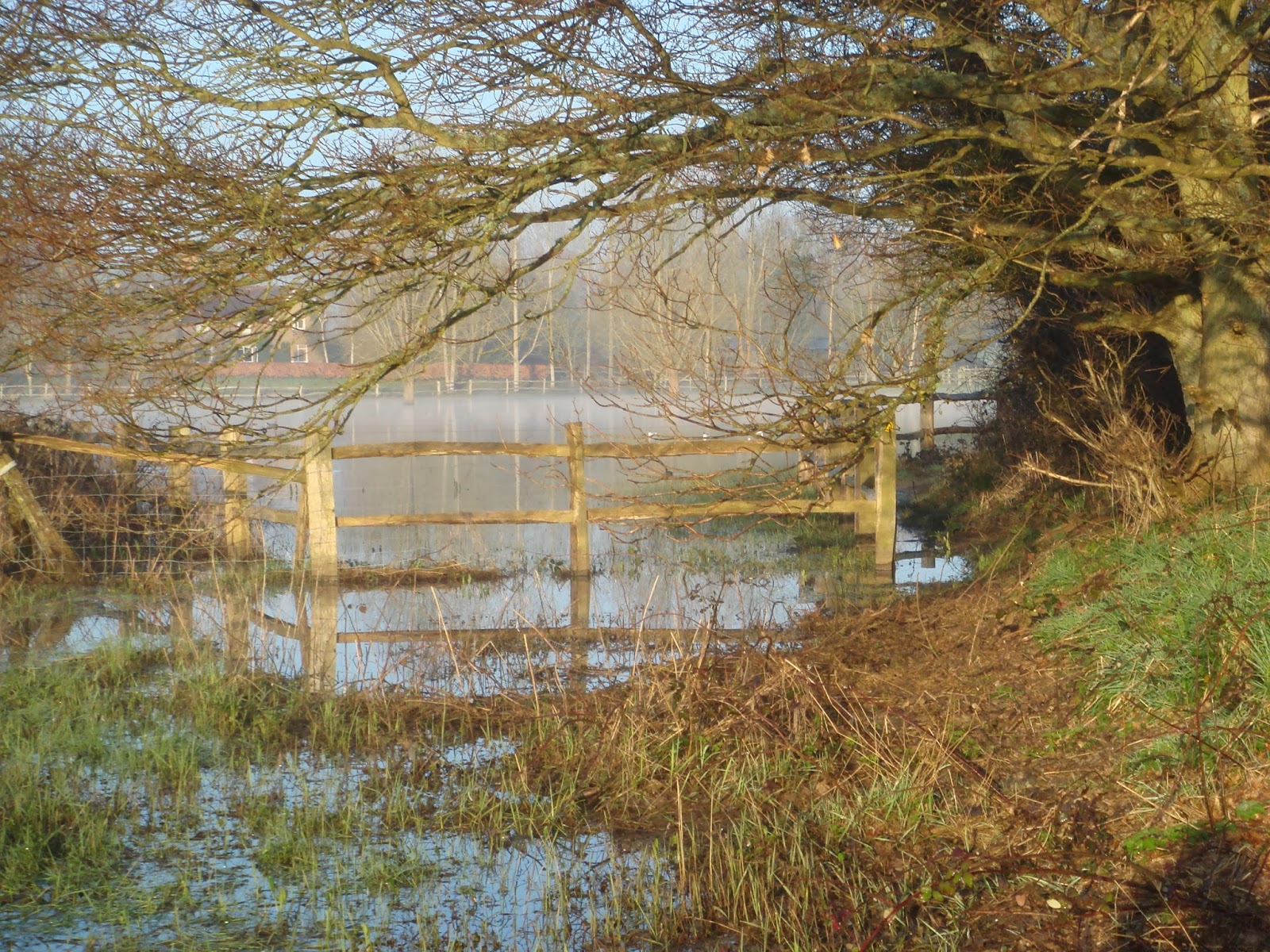 There were seagulls, moorhens, coots, mandarin ducks, mallards and a pair of Canada geese. I couldn't believe it was still flooded after 3 months. There was no way I could get along the footpath and so I had to turn round and go back and try a different route. In the next field there were geese gliding along. Please forgive my inadequacies as a film-maker!

So I headed back to Bodiam along the river path which was still very squelchy and turned back on myself to go through the business park which isn't a massive industrial estate, just a collection of a few lock-up buildings. I spotted these Red Hot Pokers flowering their hearts out in the midst of a load of rubble. I don't think anyone had told them that they shouldn't flower until July! 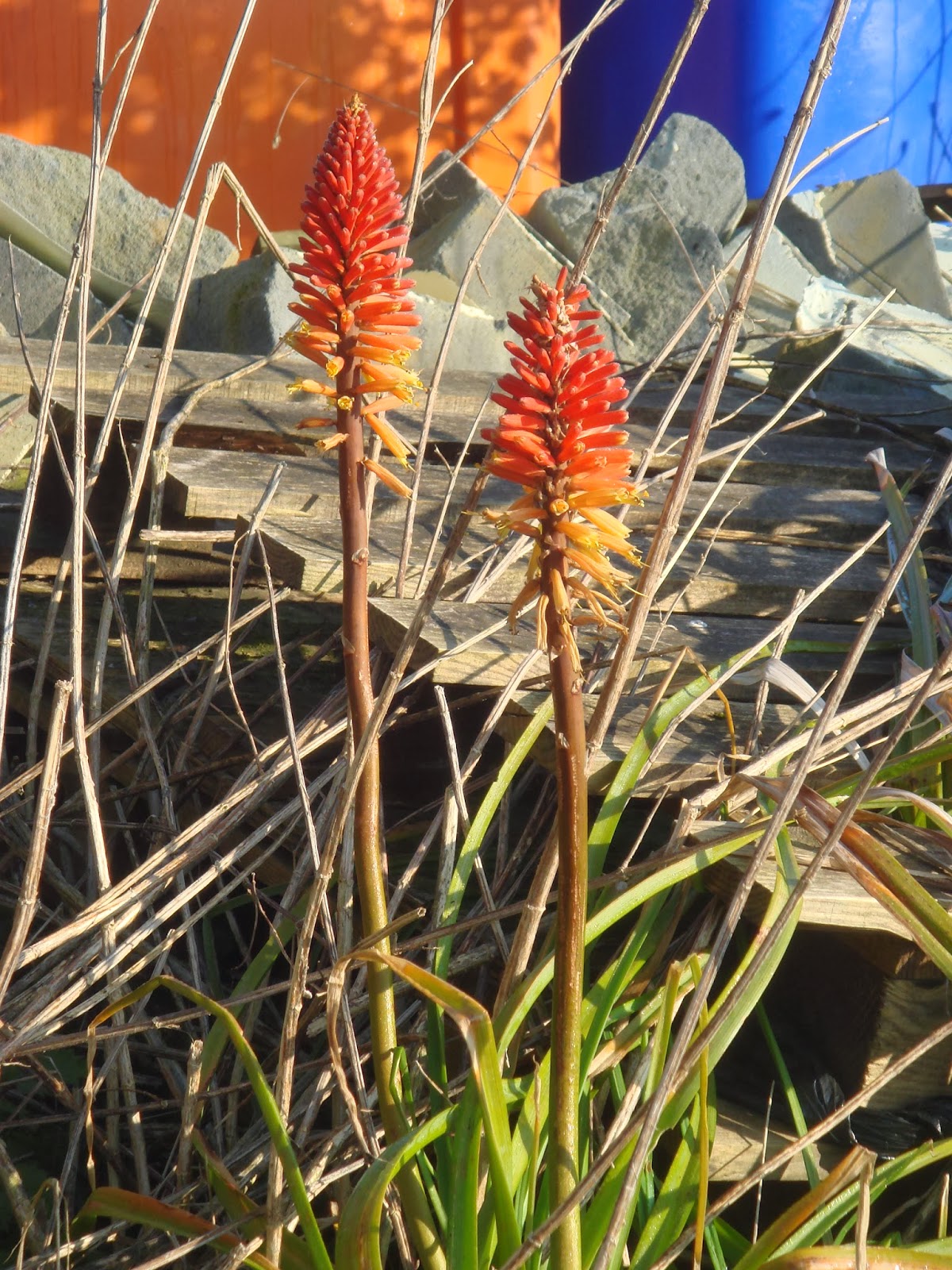 I headed off up into the hills but found that even on the higher ground it was really claggy and difficult to run. Even the sheep were sinking into it. 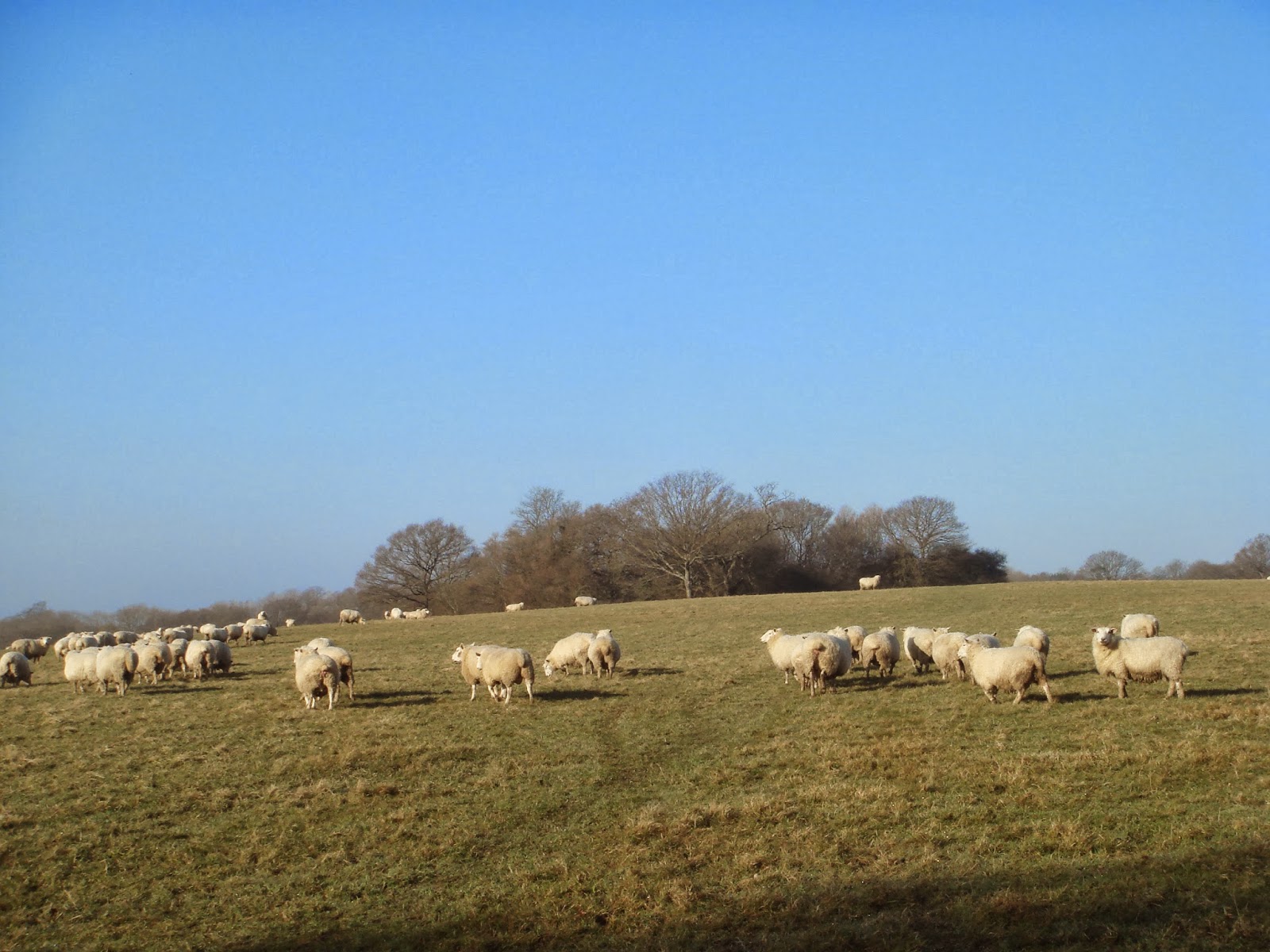 So I made the decision to abandon all ideas of doing it all as a cross-country run and doing the last 5 miles along the lanes. As I reached the pretty church in Salehurst I noticed this beautiful memorial carved with glorious celtic knots. Isn't it stunning. 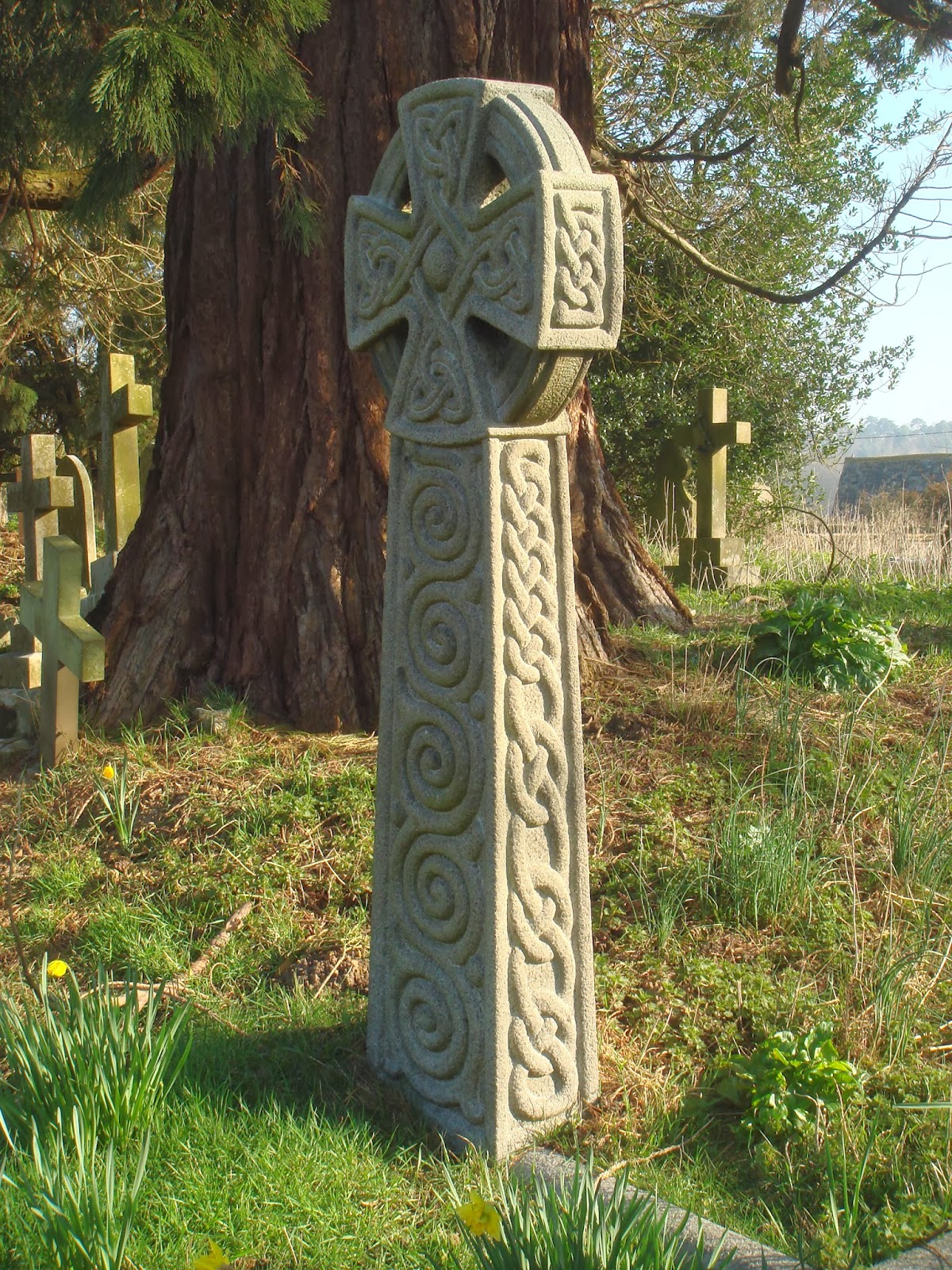 I also noticed that my shadow looked as if I was wearing a dress because I'd wrapped my shirt around my waist. I look knock-kneed too. 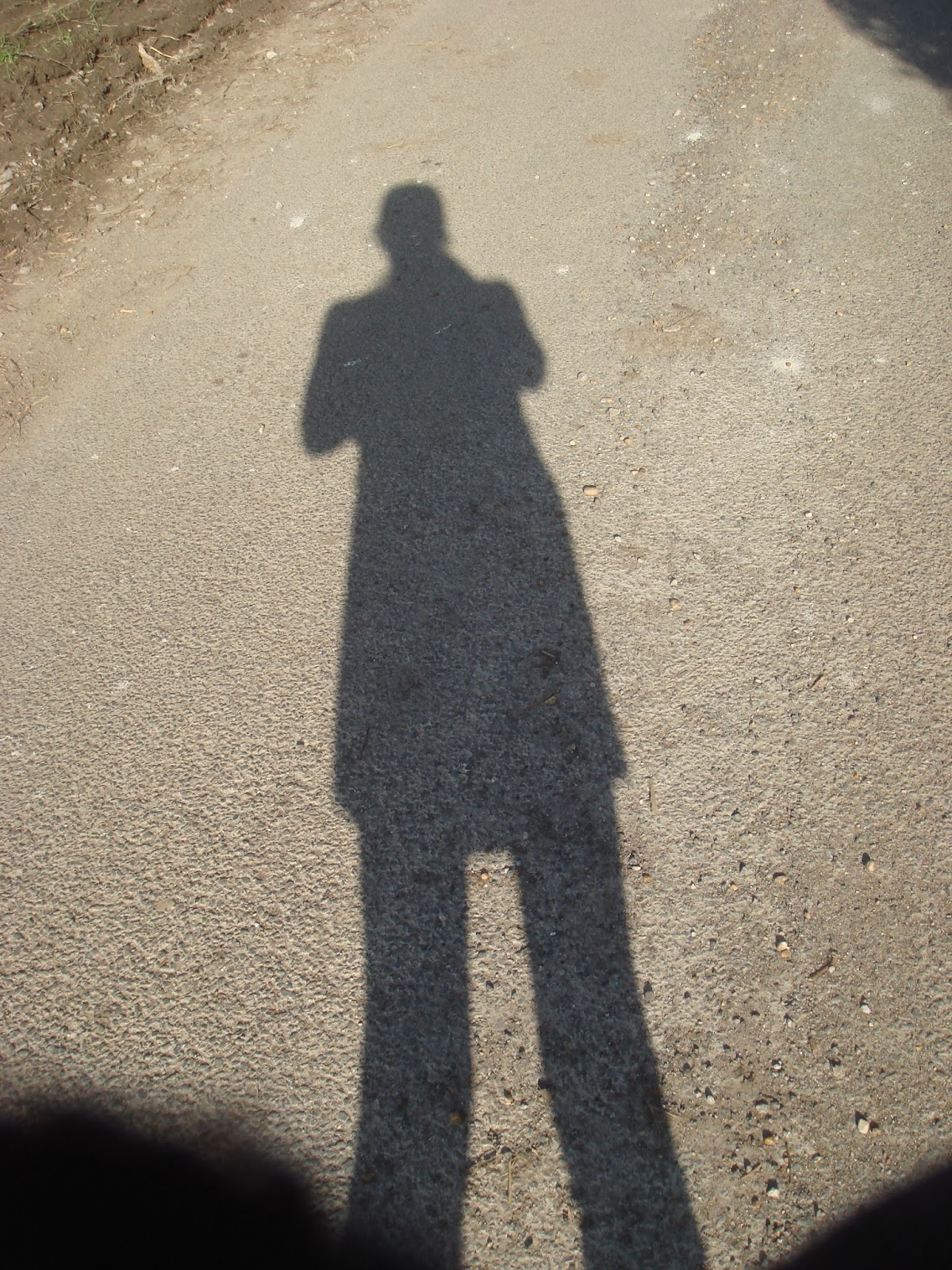 I was relieved that my leg felt OK as I ran along the lanes but I am still anxious not to aggravate it as shin splints can be difficult to shift so I'll be running off-road as much as possible next week too.

As I headed down the hill into Bodiam the rooks were making a tremendous noise. It looked as if they were busy building their nests. 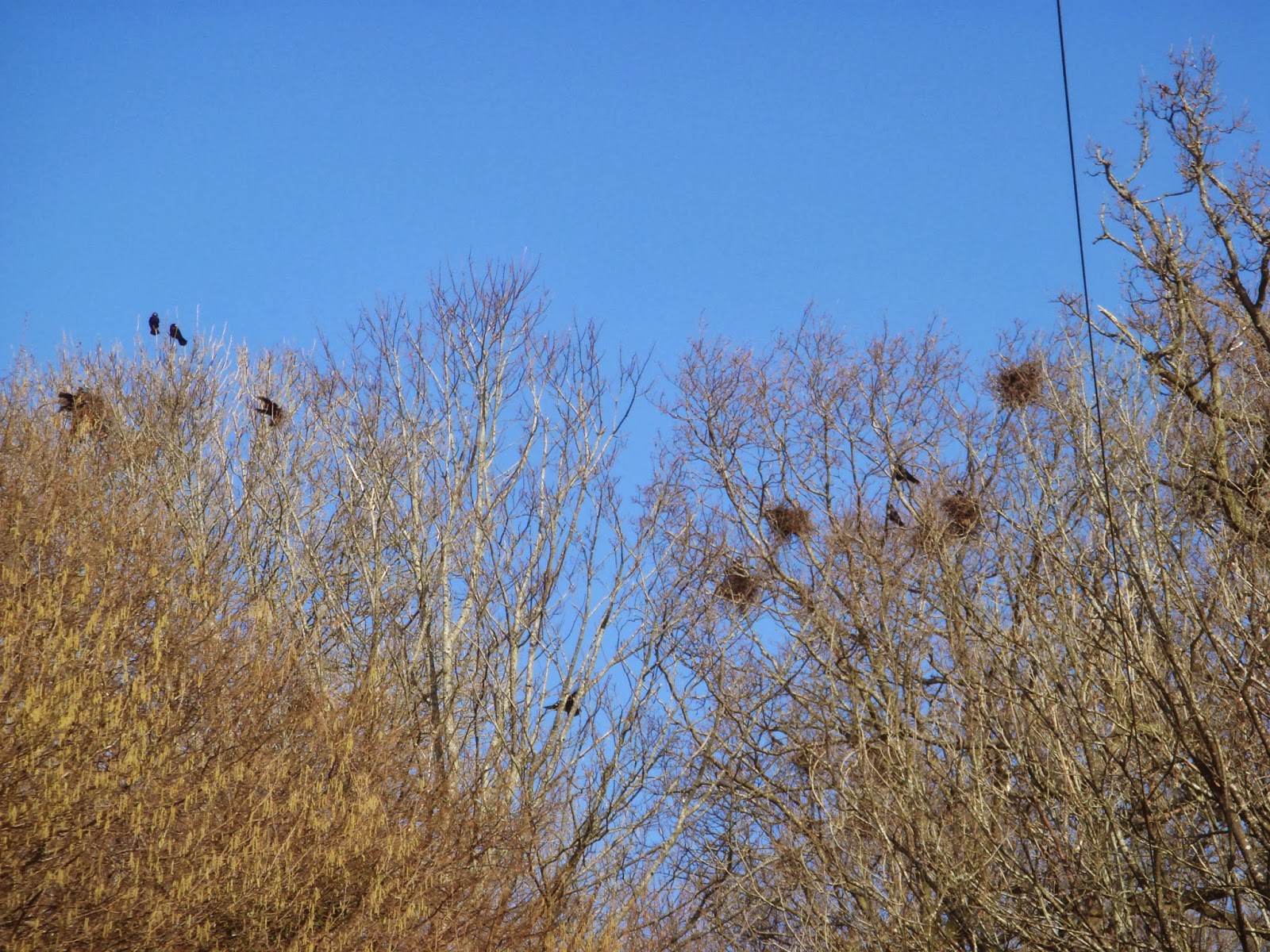 I took a bit of a detour in order to check on the sheep in our field. Mark and Melissa asked if they could come back to us again as grazing is so restricted everywhere at the moment due to water-logging. These are last year's ewe lambs, now nearly 12 months old which makes them what's known as hoggetts. They were sunning themselves quite happily. You can just make out Bodiam Castle slightly to the left of the picture. 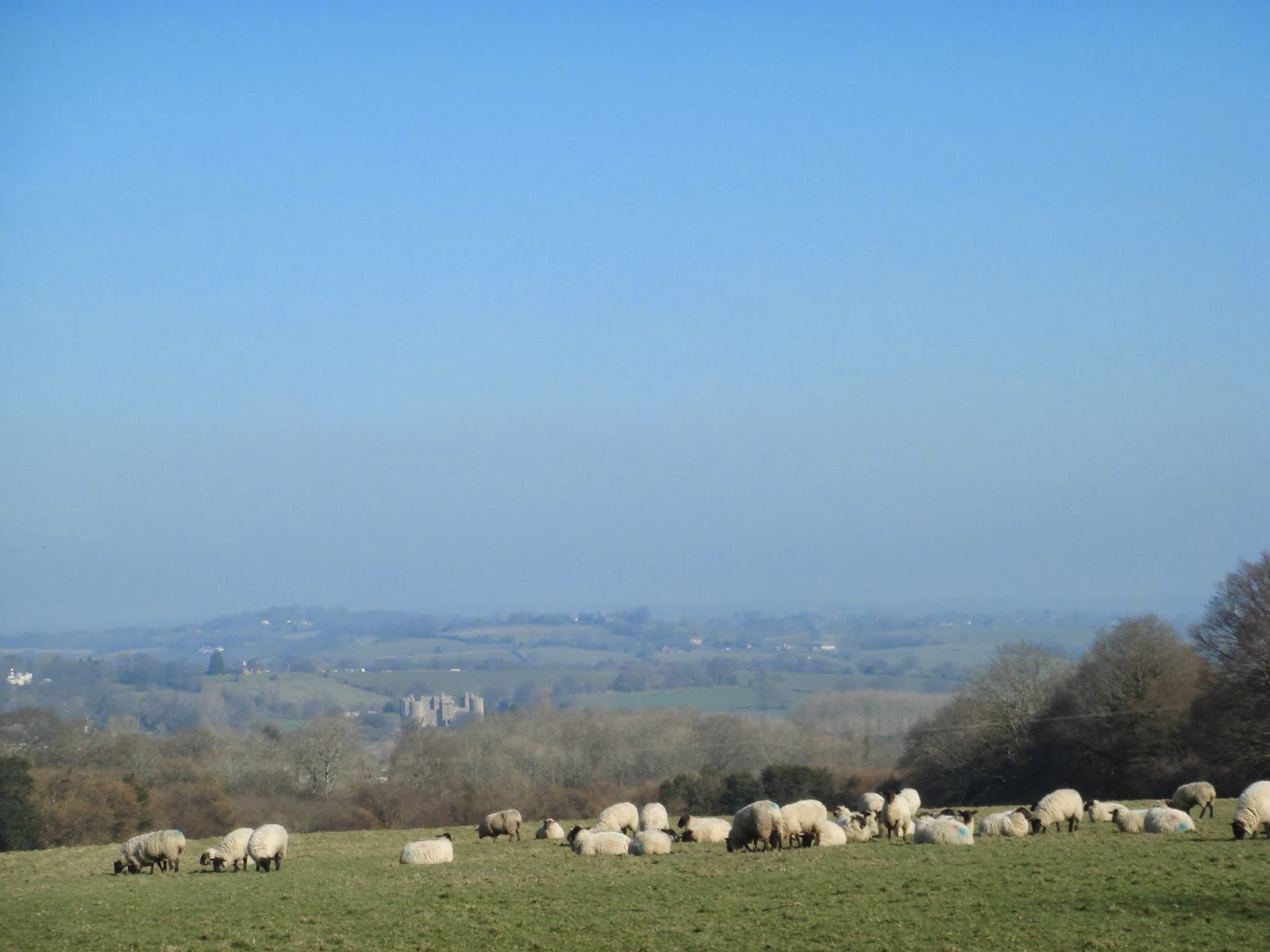 So glad your fund raising is going well Susie. I loved the pictures from your run and am in awe of those distances.
Hope the shin splints soon clear up.
Jacquie x

Thanks Jacquie. They can be tricksy little blighters so I need to exercise caution (which is not something I'm known for!!!).