I've just received the final photos from the lovely Ant Bliss. Ant and his team take brilliant photos and hang around in all sorts of weather to take photos of often bedraggled-looking runners crossing the finish line. As I am one of the slower runners I am always delighted to see Ant's smiling face having  battled my way round one of the many downland marathons. More of Ant's race photos later.

Mike took these two shots of the gigantic wheel by the seafront. With the advent of the Millennium wheel alongside the river Thames in London there seems to be  a craze for installing them in seaside towns.

On a clear day the views would be lovely. 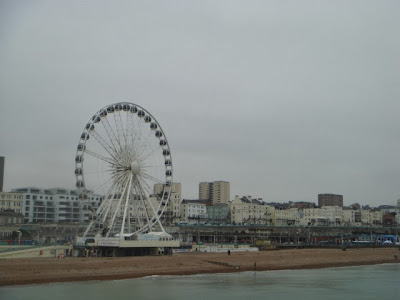 Now for some of Ant's photos taken at various points during the race. I always, always have a big smile on my face 'cos I just love running and competing in races alongside other people.

When I started running 11 years ago it was to raise money for Cancer Research in memory of a friend who died of leukaemia. Nobody, including me, thought I'd manage the 5k race and I never dreamt that I would continue running after the race, but I did.

At the time I was a full-time carer for my mum and for one hour each day, after breakfast when mum often had a nap, Mike would take care of her whilst I went out for a walk or a run. It quickly turned into my special time, all to myself and with no worries and it gave me the strength to carry on.

The rest is history and with 31 marathons under my belt I still feel that running has become my life-glue and I can't imagine not wanting to run any more. Some of my best ideas come to mind when I'm out on my longer runs and it really helps to recharge my batteries.

So back to the photos:


After the race we headed off to the car so I could get changed then we went for a wander round the shops. It was starting to drizzle with rain and the sky looked rather grey and ominous.

This whacky shop made me smile with it's zebra stripes and zebra's head. 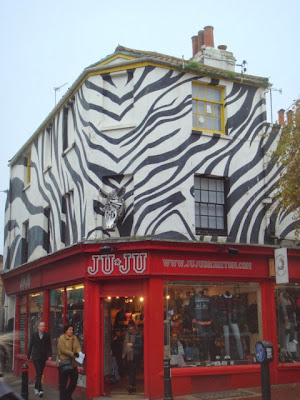 It reminded me of a painting by the wonderful Charley Harper entitled Serengeti Spaghetti. I think it would make a wonderful cushion done in Bargello work. His stylized animals always impress me as he has a keen eye for reducing their form to the bare minimum.

It also brought to mind my own zebra sweater which I knit about 25 years ago. I saw a sweater in a posh shop but it was way beyond my budget at the time so I copied the pattern onto graph paper and then adapted a knitting pattern that I had already to incorporate the zebra stripes. It's made using a very soft cotton and it has been thrown in the washing machine and treated with the minimum of care yet still looks good after all these years.

Funny how some handknits stay with you for years yet others are either undone and re-knitted or passed on for others to enjoy.

I spotted a couple of shops with mosaic in shop entrances. Not complex patterns but jolly all the same. 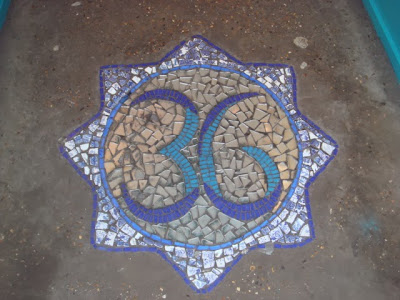 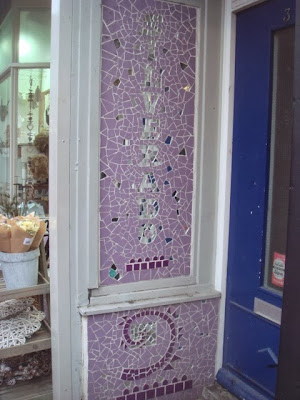 That evening we celebrated with a glass or 2 of Buck's Fizz for it is a well-known fact that if you put orange juice into champagne it doesn't count as alcohol. 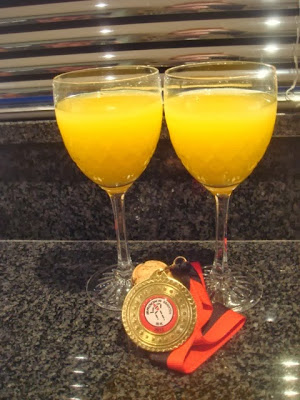 I had my dressing changed twice this week and finally the big bandage has been replaced with a waterproof plaster in girly pink. Not only does it make holding things a lot easier, it looks so much better as the bandages got dirty so quickly; although that probably says more about me being a mucky pup than the bandage! 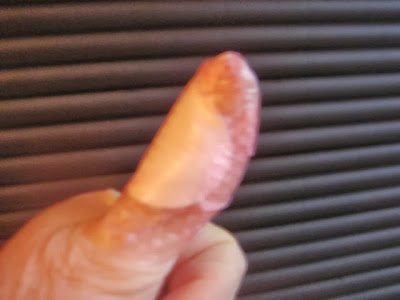 As I pulled into the car park at the doctor's surgery, I spotted the local geese paddling in the water by the recycling bins. As soon as I stepped out of the car they came flying towards me. Not aggressively, they just wanted food as they are an important part of the village and are spoiled by the local people. The local pub takes charge of them. 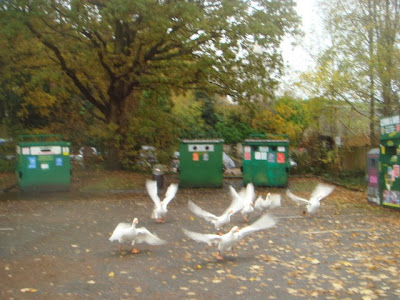 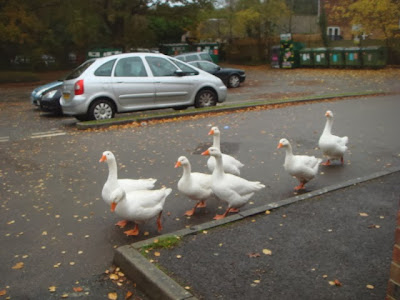 They formed an orderly queue and were rewarded with the bread I'd taken with me in case they were around. 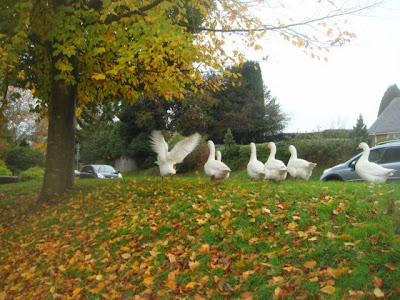 They acted as my escorts to the surgery. 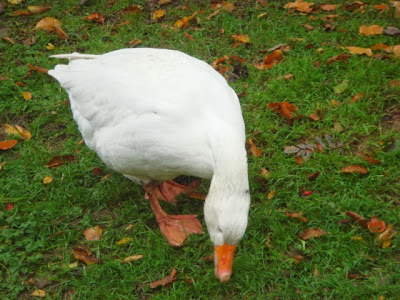 Our beautiful boy is still with us but the lumps have now joined together to form one great big lump on his shoulder which you can see quite clearly in this photo. Poor boy. 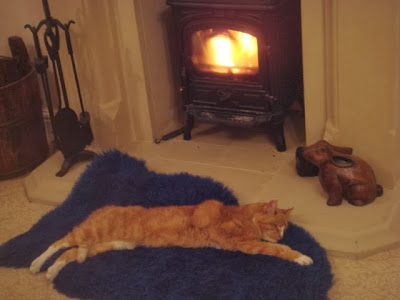 He looks so peaceful stretched out there in front of the fire. He purrs like mad and asks to be stroked and he still jumps around and uses his scratching post as if there's nothing wrong with him. I have a feeling that he will just go downhill all of a sudden so we'll make the most of what's left of our time with him.