A trio of marathons

Here I go again, another weekend, a few more events from Traviss and Rachel at Saxons, Vikings and Normans based out of the Cyclopark at Gravesend in Kent. It was a series of 4 challenges, starting on Thursday through to Sunday, in which you could complete just one lap to get a fantastic medal or complete as many laps as you wanted within the time limit. Some people did all 4, others dipped in and out. I chose to do 3; Thursday then a day of rest before Saturday and Sunday for my 7th set of back-to-back marathons this year. Our wonderful Race Director Traviss celebrated his 50th birthday on day 2.


Each day it was a case of eat, sleep, run, repeat!


Well I had to do that one didn't I as we're right in the midst of the Rio Olympics! The only trouble was that the weather had suddenly become rather hot and Gravesend often records the highest temperatures in the region. I packed my sun lotion factor 50 and plenty of water plus my usual banana & walnut cake for the aid station and set off at a time I thought would help miss the really busy commuter traffic.

Although it only took just over an hour to get there (which is a blessing as most events are around a 2 hour journey), it was one of those journeys where you shake your head at the bad driving you encounter for example tail-gating, overtaking on a blind bend and even someone jumping a red light and narrowly avoiding a pile-up!

I'd packed my flask of coffee so after I'd phoned home to let Mike know I'd arrived safely and then collected my number I sat in the car listening to my Italian for beginners cd. I'm determined that one day in the future, when our lovely old horses are no longer with us, we'll be able to visit Venice and Florence and I'd like a basic understanding of the language. So I sat in the car sipping coffee, repeating words and phrases whilst watching the world go by.

The route was the same as one we'd done earlier in the year so I didn't take any photos. It was out and back with a couple of uPdulations on a mix of tarmac and trail and for a marathon you had to complete 8 laps. Taking the weather into account, I targeted 5.5 hours as the humidity was high, which affects my asthma. There were lots of the Usual Suspects there so there were plenty of people to chat with and I shared a few miles with Andy, seen below with his super-speedy wife Elaine:

As we were celebrating the Olympics, a fellow runner had brought along the torch he had carried at the UK Olympics 4 years ago. Jim had been nominated as a Community Hero to carry the torch through Southampton and he very kindly offered to let people hold it and have their photo taken but I preferred to have my photo taken with him as it was his treasured memory:

It's not easy to tell how big the medal is so here it is shown with a ruler:

But that wasn't the only medal of the day. Traviss is chairman of the 100 Marathon Club of which I became an 'associate member' when I did my 50th marathon, at which time there was no acknowledgement of the achievement. Enter Traviss with the latest of his excellent ideas to celebrate achievement and there is now a medal you can buy for a nominal fee to mark the occasion. So I did - isn't it lovely!

I was really looking forward to this event as it encompassed some really lovely areas where we've run events before namely Ranscombe Nature Reserve (oh my goodness I just looked back at my photos from 2015 and it was glorious there and it was my 50th marathon!) and Jeskyns linking them via a route past the Darnley Mausoleum in Cobham Wood.


During the usual pre-race briefing 2 of us were delighted to receive our special hoodies celebrating having completed over 1000 miles at Traviss and Rachels events. To put that into perspective, my annual mileage is usually around 1700 miles in total so quite a lot of those miles have been run at their events and it's lovely to get some recognition. The next day Eddie was given a purple one, my favourite colour, for reaching 2000 miles with them so now I've got another target! 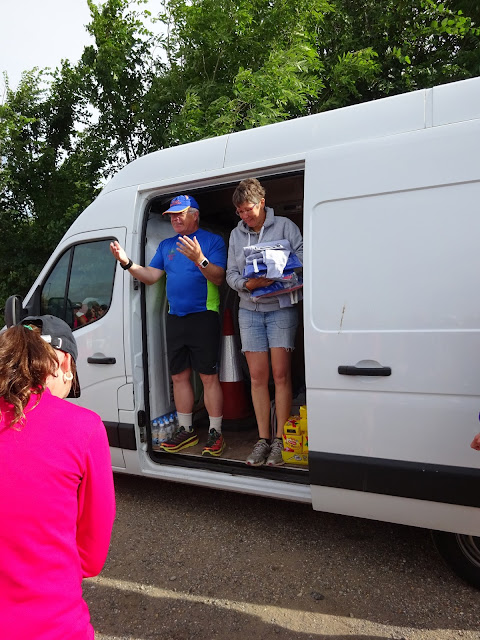 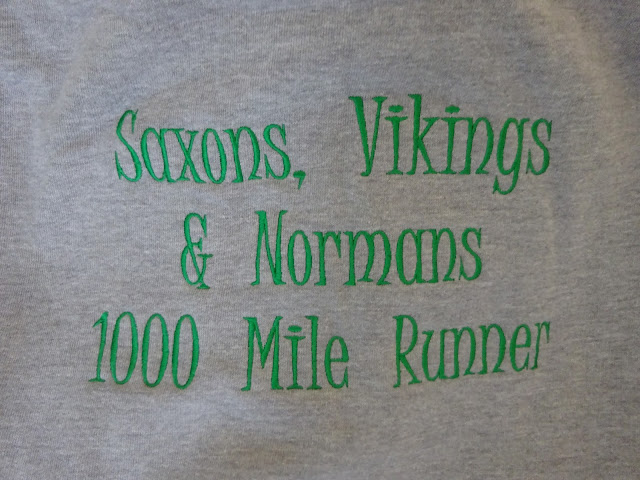 Rather than lots of laps this one was 2 longer laps of just over 13 miles each which made a nice change. I set off with Andy again at a gentle pace and chatted away so the miles passed effortlessly. I made a mental note of what I wanted to photograph on the next lap. As Andy's hip started to hurt towards the end we walked a lot of the last part and he decided to call it a day after the half so I headed out again on my own. The weather was much cooler with a nice breeze.

The first part of our route took us through Jeskyns, passing through these 2 huge wooden sculptures. I was lucky that 2 walkers were passing inbetween to give a sense of scale. 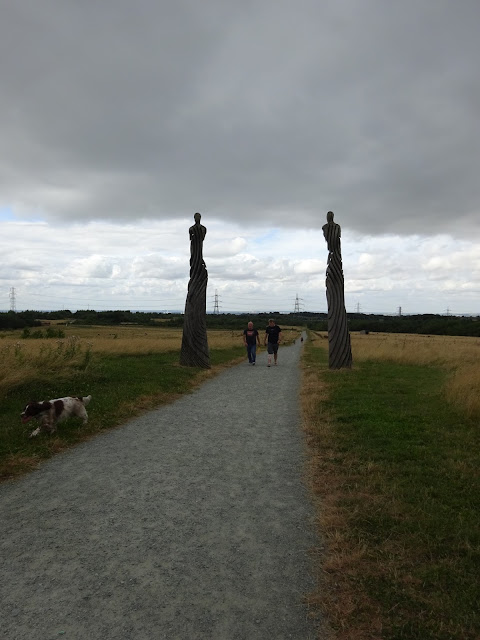 Then we headed along the pavement through Cobham village which had 3 pubs! Apparently Charles Dickens was a regular visitor to the village and part of The Pickwick Papers was set there. 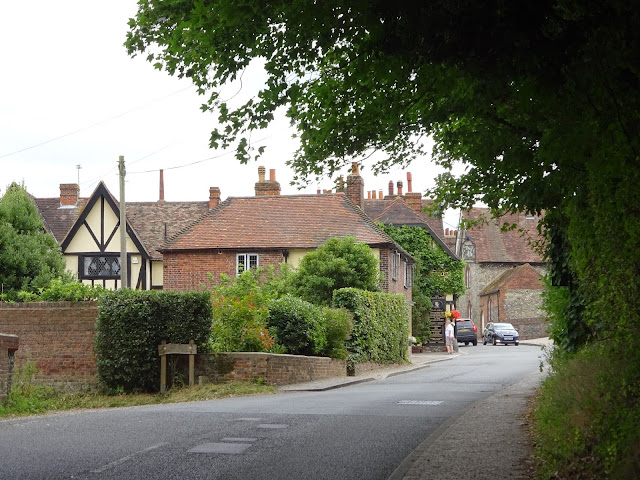 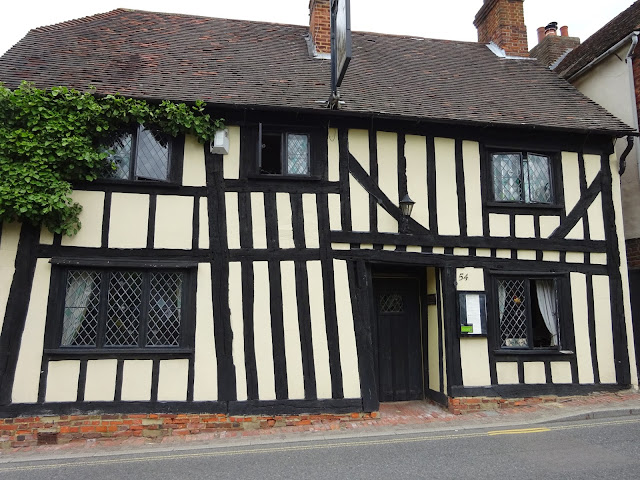 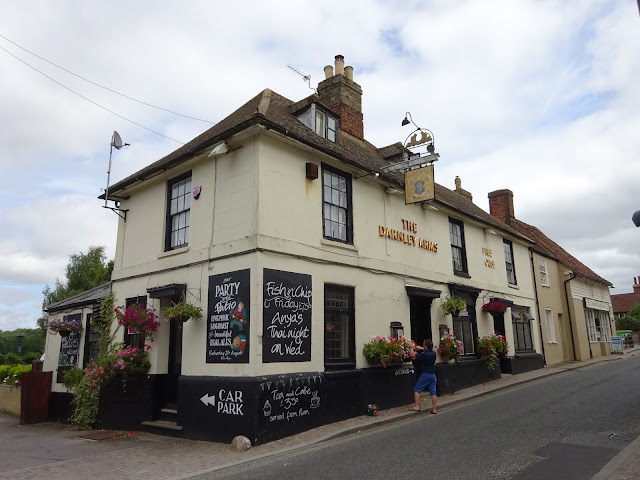 After we'd passed through the village we headed into Cobham Woods towards the Darnley Mausoleum. 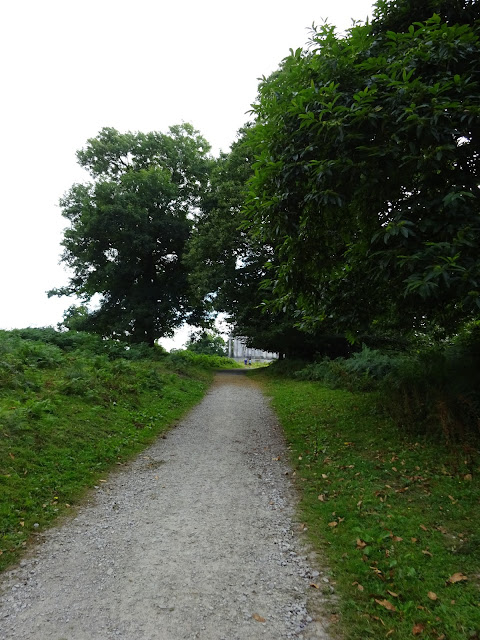 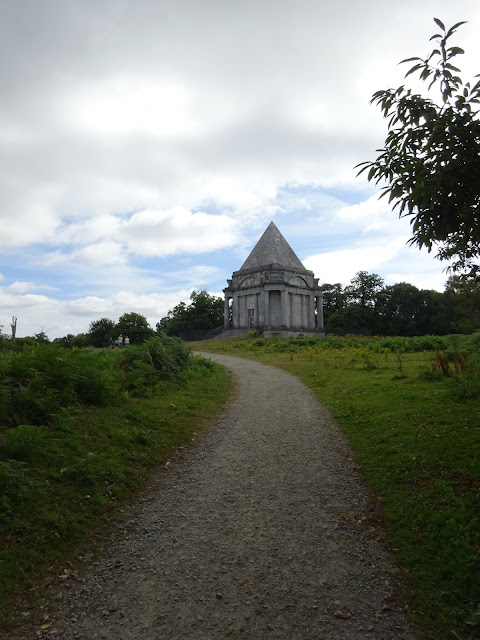 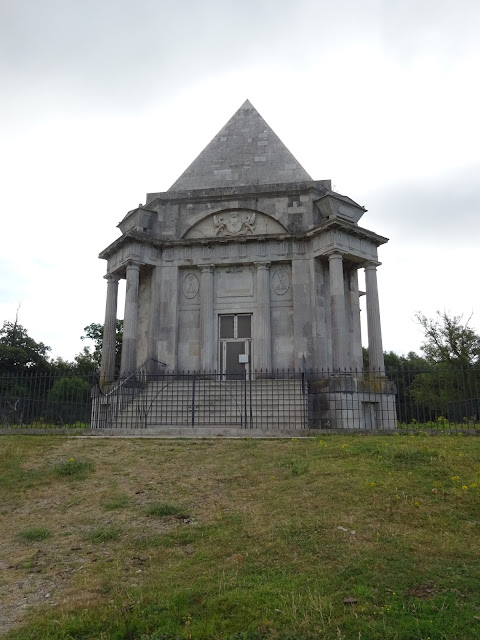 After this we headed through woodland and into Ranscombe Nature Reserve passing close to the high-speed rail link then through fields towards the aid station at the halfway point. 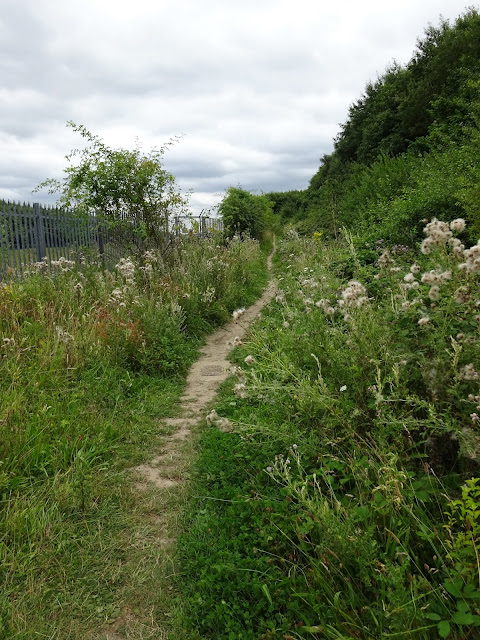 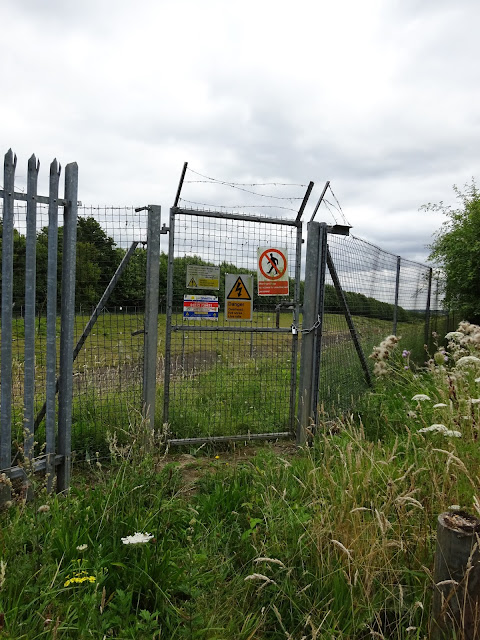 There were beautiful expansive views across towards the River Medway and the more industrial side of Kent but changing to farmland as you look from right to left: 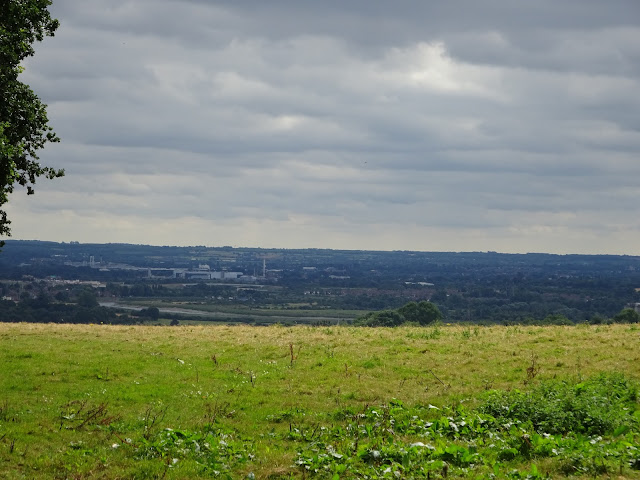 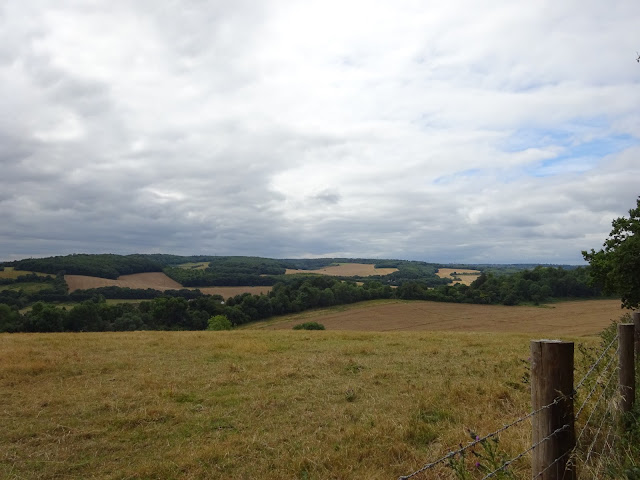 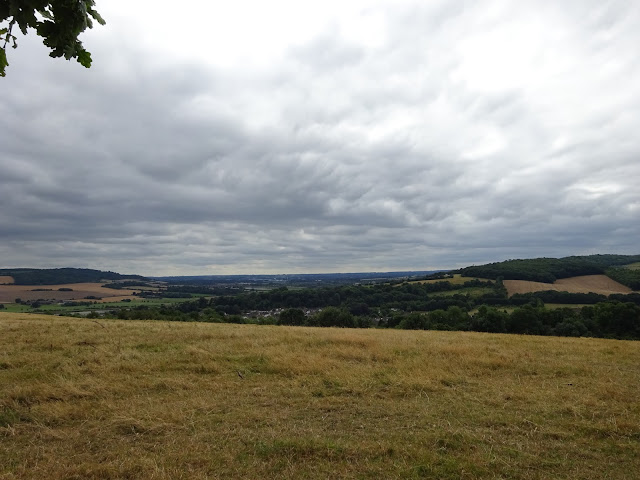 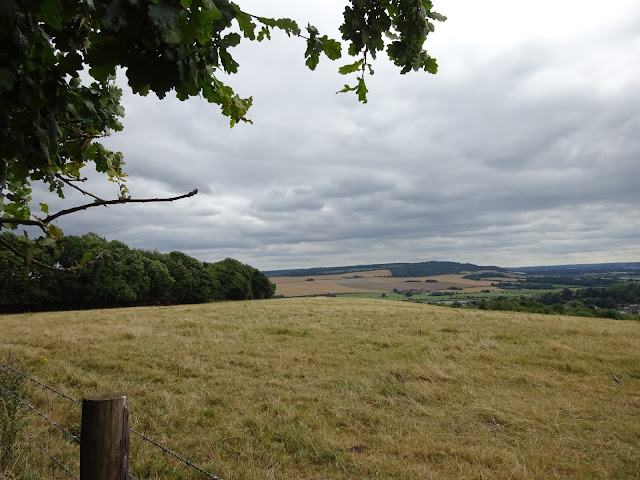 Traviss chose this theme to mark 40 years since the Sex Pistols launched onto the scene and naturally lots of people had dressed for the occasion: 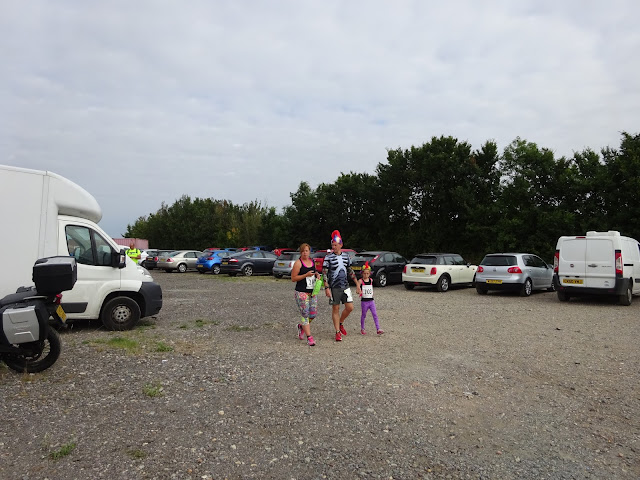 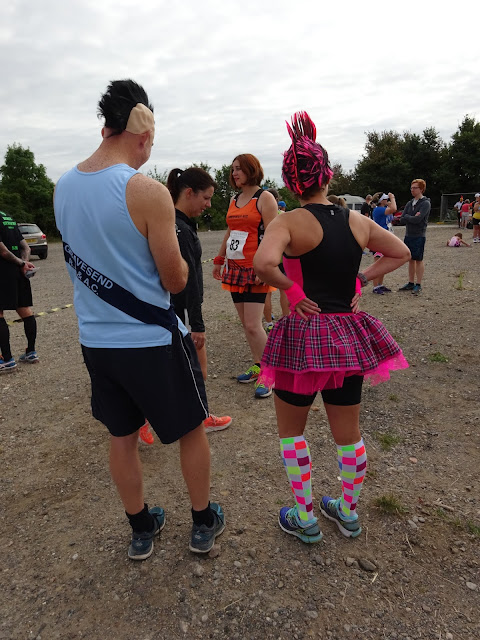 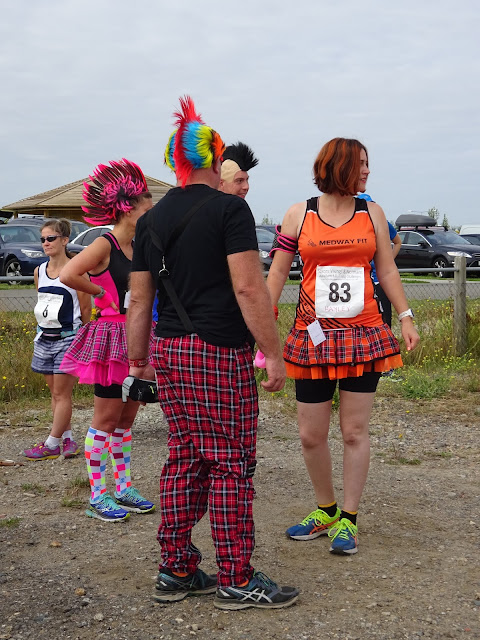 I had taken my fishnet tights and a purple tutu in case I wanted to dress up. In the end I wasn't in the mood as whilst listening to the radio en-route I realised that on that date 14 years ago I'd received a phone call which changed our lives and not in a good way. I'm not dwelling on that as I've written about it before and anyway I'm still here and Carpe Dieming but it did make me a bit teary for a while!

Time for some happy photos:

This was another route of laps in which you needed 8 for a marathon. It started with the route used by mountain bikers and was the sort of terrain which has Susie Splat (aka a faceplant on the ground!) written all over it so I was extra cautious each time. In fact, apart from the first few laps I walked most of that section. 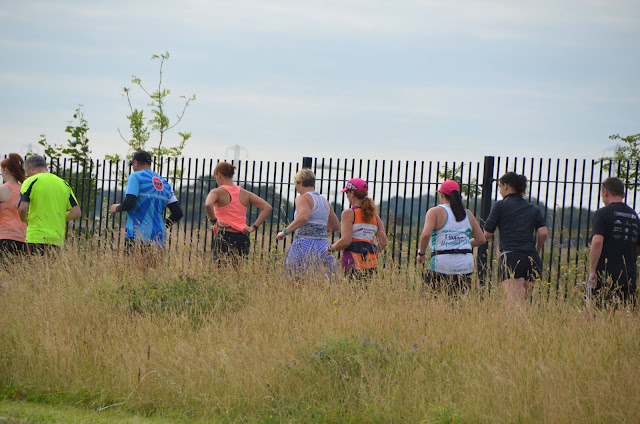 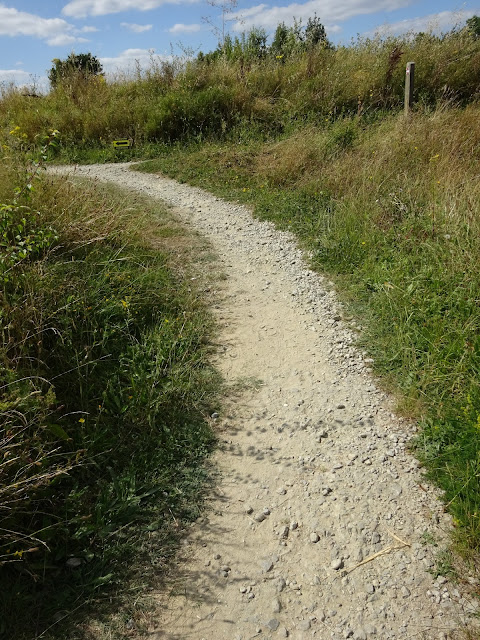 After that short section we headed out on a similar route to day 1 except we didn't go across the bridge. This was a mixture of tarmac and trail. The sun came out and it was rather warm again.


As usual there was plenty of friendly banter en-route and everyone was really supportive. The spectators were generous too and not just shouting out to their chums. The Rebel Runners had the most tremendous supporters and I can't thank them enough for cheering for me on each lap. Thank you so much!

I was delighted to see the speedy boys, Steve Edwards/Martin Devine and Paul Bridges really pushing themselves and it was great to see Martin claiming first position on such a hot day. I must also mention the lovely Leo who went ultra at each of the 4 events. What an impressive achievement. 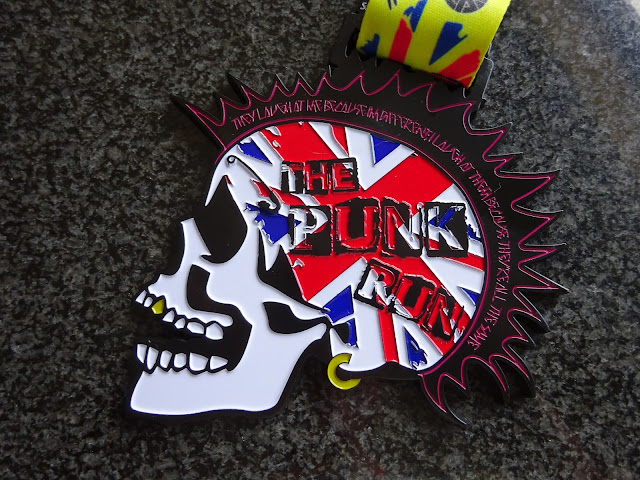 I'm still amazed that my body is letting me keep piling on the pressure and hope it holds up OK for the remaining 9 marathons required to reach the magic number! 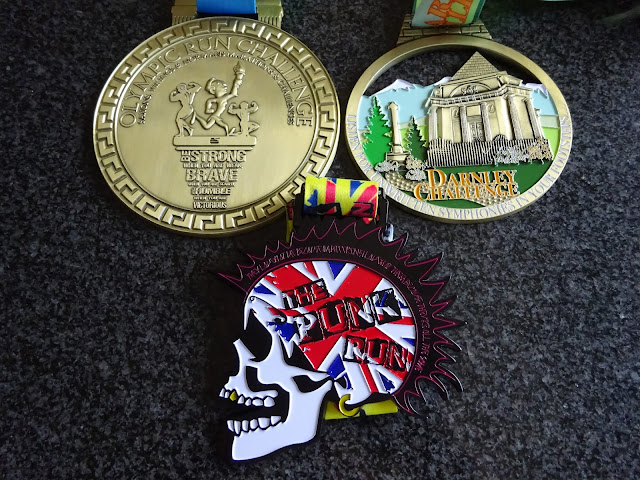