Oh what a beautiful morning! 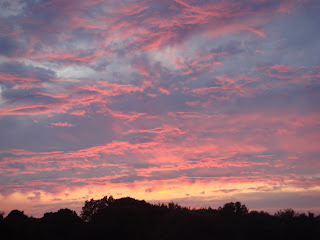 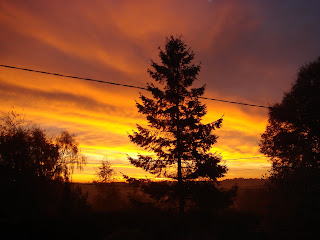 The days are drawing out at last and there was a beautiful sunrise this morning. First the sky was rippled with pink then it turned to a glowing amber.

There was a mist swirling up the horses field which looked very ethereal.

I love the lighter mornings and I've already started to get out of bed earlier.

Today I have to do just 4 miles at the pace I intend to run my marathons.

For the last 2 weeks I have run just over 50 miles each week and so now I'm taking what is referred to as a 'step-back' week where I reduce my mileage to allow my body to recover in readiness for the next hard week.

Rest and recovery are very important elements of any training regime and I feel as if I'm reaping the benefits.
Posted by Susie Hewer at 12:37 AM No comments:

Last week I was nearly blown off my feet it was so windy. It really sapped all my strength as it was a particularly hilly route. This week it wasn't as windy but it was raining! I actually don't mind the rain too much as it cools me down. I ran very slowly and felt OK all the way round.

Next week is a step-back week and then I've got the Tunbridge Wells 1/2 the week after where I shall see if all my speedwork training has made a difference. I certainly hope so as it's jolly hard work. 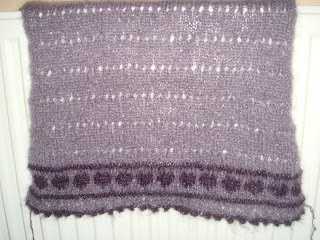 Now for a different Two. The sweater tunic one.

I've ripped back all but the front of it so I thought I'd record it to show how the heart motifs worked out. I rather like them. This remaining piece will be going in the freezer overnight for ripping back tomorrow - that's a useful tip for anyone who has to rip back mohair as it makes it so much easier.
Posted by Susie Hewer at 8:27 AM No comments:

On 9th February, Mike and I had the honour of attending the launch of Alzheimer's Research UK at the Houses of Parliament in Westminster. Mike plays the very important role of 'back-room boy' in my fund-raising activities and this often doesn't get a mention so I was very pleased that he came too. He's the one who mops up my tears when my training doesn't go as planned, kicks me out of the door when I'd rather stay curled up in bed and waits patiently at the end of the marathon to greet his tired, sweaty and over-emotional wife!

The evening was hosted by Julian Huppert MP for Cambridge which is where the charity is based.

It's a very exciting time for Dementia research and I am proud to play a small part in the changes in attitude and awareness that are taking place. If only we could get the funding in place we'd have a chance of better understanding this devastating disease. 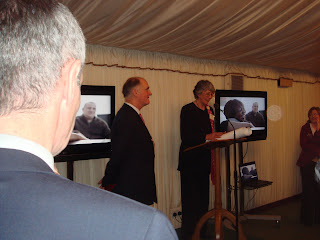 As soon as we walked in we were greeted by Sue who's the Media Officer and with whom I have a great deal of contact via email and the phone but rarely see in person. Sadly I haven't got a photo of her and must make sure I get one next time we meet.

She introduced us to lots of different people, the first being Jamie and Vicki Graham who raised the amazing sum of £90,000 for research into Dementia. Jamie was diagnosed with Alzheimer's 3 years ago at the age of 59 and he and Vicki have worked tirelessly to raise this staggering amount of money for research. I felt myself getting a bit teary as I listened to her talking about the Jamie she knew and loved who is gradually being taken away by this cruellest of diseases.

There were many of us there who have the honour of being named Champions in recognition of the things we have done to support research into Dementia. We each have our own story to tell and I felt very humble hearing about other peoples experiences. 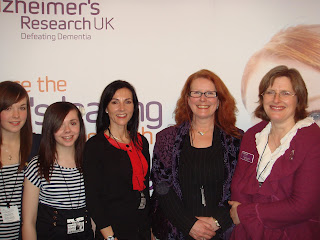 One person I hoped would be there was Dione Priddy. Her husband Mark was just 36 when he was diagnosed with early-onset Alzheimer’s. Dione decided to do something positive by running the 2010 Virgin London Marathon to raise money for dementia research and give hope to future generations. Sadly, Mark passed away just two weeks before the run but Dione was determined to go ahead and raised £18,000 for Alzheimer’s Research UK. I'd read her story before the marathon last year and really hoped that she'd run past me so I could give her a hug,

I was very glad to have met Dione at last and her 2 lovely daughters, Eleanor and Bethany. We chatted with ease and decided that we'd like to do some fund-raising together so we've exchanged email addresses.

Rebecca Wood, Chief Executive, on the right of the photo, spoke with passion about the need for more funding into Dementia and Professor Julie Williams gave an optimist insight into current leaps in understanding the disease. She pointed out that Dementia research is at the same stage as Cancer Research was 20 years ago and said that with investment we could be looking at a positive outlook for Dementia.

Let's hope so.
Posted by Susie Hewer at 4:01 AM No comments: