Hoorah, I managed to get another marathon in without weather disruption last weekend! It was another SVN event over at Kings Wood, a lovely route through Forestry Commission owned land, which I've done several times before.

I knew that even though it had been raining heavily last week that it would be OK in the main as the route is on Fire Tracks, which are used for vehicular access and are mostly gravel/stone, with just a few muddy sections. This what my poor gravel garden looked like after the last downpour: 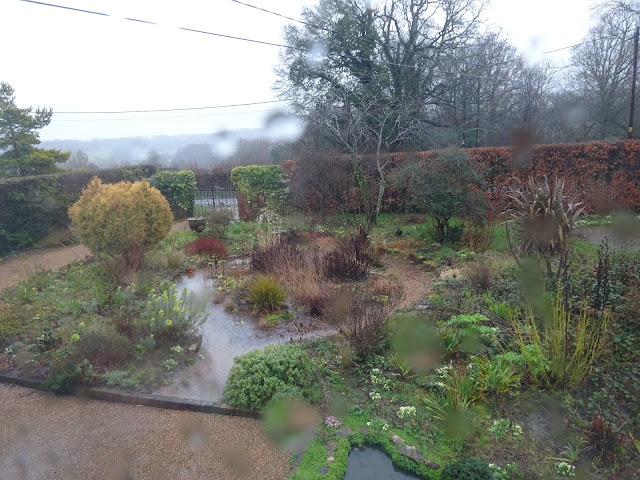 When I arrived at the car park the weather was a bit grey and overcast but it stayed like that the whole time which was perfect. I set out with no idea of pace or time and just ran how I felt.

I reached marathon distance and decided that although I felt OK to go out for an ultra on the trail, I'd prefer to do another 5 miles on tarmac so I rang the bell and then trotted off along the lane on my own to get some extra miles in. I have another marathon this weekend and it's going to be a tough one. 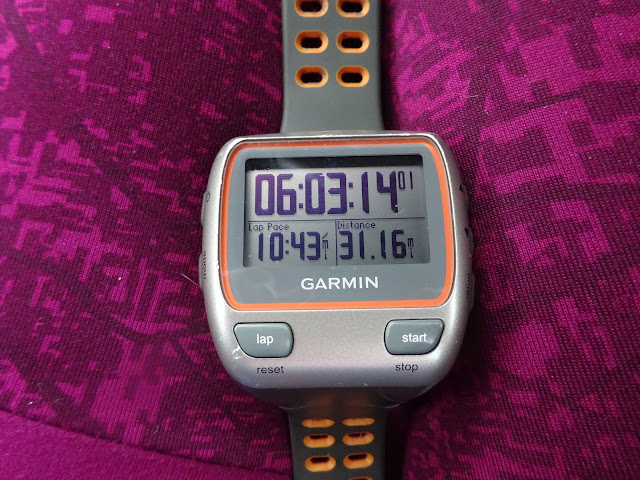 Speaking of purple, here's where I'm at with my weaving project of a scarf. I watched the course videos all the way through twice and then just dived in. I can see already that my tension and beating are both improving which is encouraging. Shelley has been banned from the room whilst I'm weaving as she doesn't miss an opportunity to climb up onto the table and play with the yarn or climb underneath the fabric! 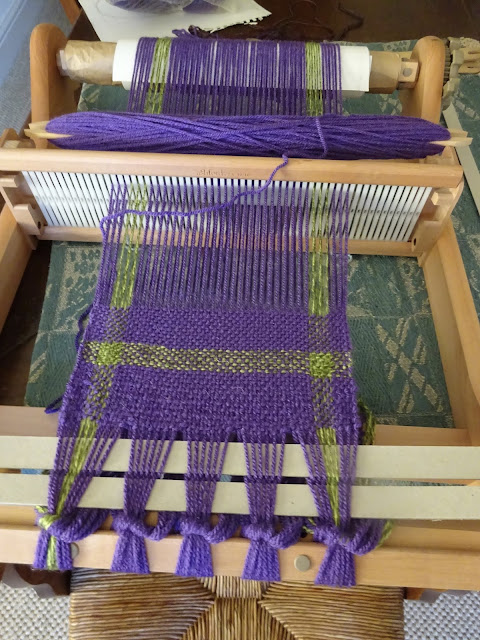 She's also been helping me with my Six Pack stuff which I did indoors today. I do a few exercises then throw one of her toys for her. Here you can see squish square, catnip banana and a silver foil ball which she brings back to me, bless her. 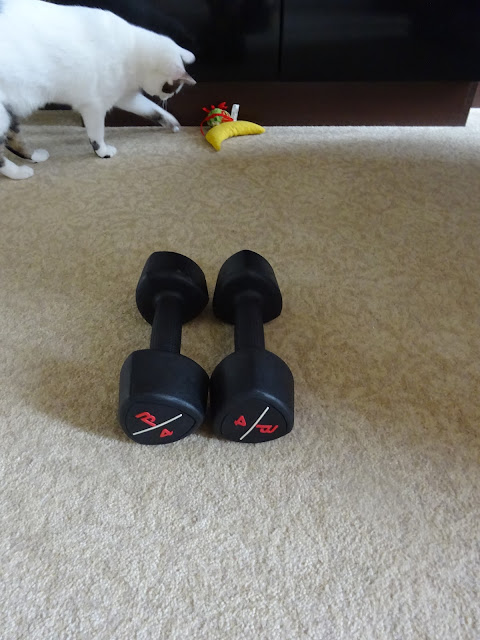 I finally finished and mounted my paper-cut picture and Mike put it up on the wall for me. I spent ages putting the mounting pins in just the right place in order to get some interesting shadows and I'm quite pleased with the result: 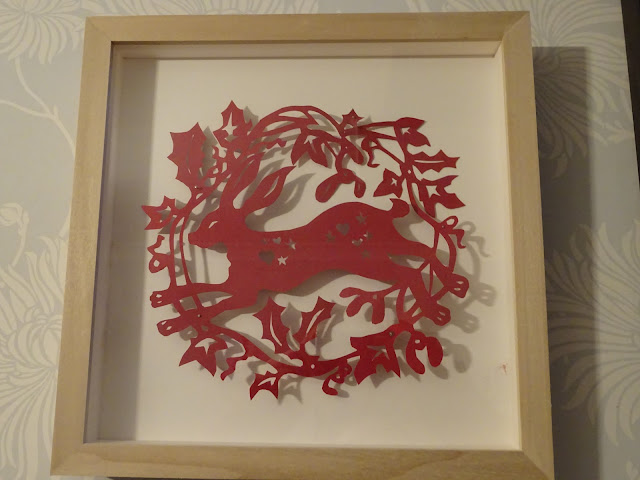 Posted by Susie Hewer at 8:58 AM No comments:

I missed another marathon last weekend - mud and dire weather warnings this time!

This seems to be a pattern for the start of this year as that makes 4 I've missed because of the weather/safety issues and I've only managed to run 4. I was gutted at first and then I gave myself a good talking to and decided that it was more sensible to go for a long run along the lanes near home rather than driving 2 hours, walking lots and risking slipping and falling in the mud (so not getting a good run) then driving 2 hours home again.

So I devised a 20 mile route which involved either going up a hill or down a hill for 75% of my run. The beauty was that I was never more than about 6 miles away from home at any given point so I could always crawl home if I had problems. The weather was cold and overcast but was fine for the first 4 miles and then the rain came. Not just a little bit, blimming heavy stuff accompanied by strong winds for the next 7 miles. I got soaked. This was followed by a short sharp hailstorm just for good measure!

I spotted these beautiful geese along the lane and their white feathers looked so bright in the strange grey light. 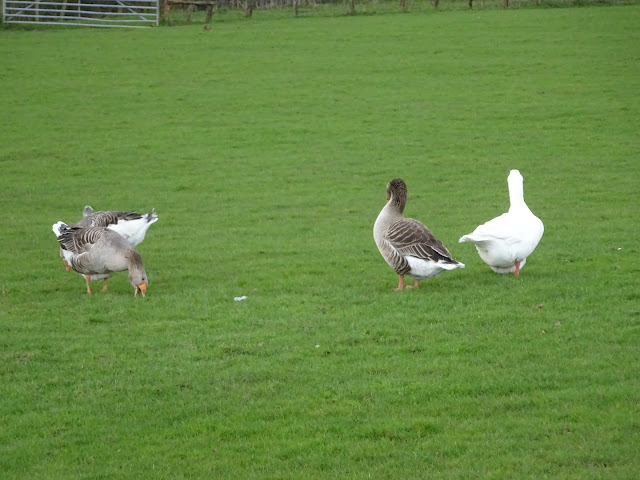 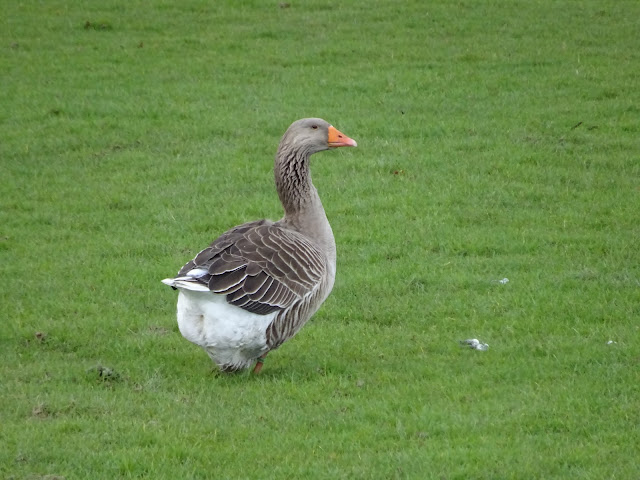 I was picking my way around the potholes and puddles along a little lane at 14 miles when a car came speeding along so I moved as close as I could to the hedge (we don't have pavements round here) to let him pass and what did he do? He drove right through a massive puddle really fast and drenched me. I just stood in the middle of the road and raised my hands in a shrug in a WTF sort of pose. He stopped the car and started reversing back - OMG he's going run me over I thought and prepared to run!!! But he actually got out of his car and said "I'm so sorry for drenching you, I just wasn't thinking" (phew!). Then he noticed my ARUK vest and said "Are you the lady who runs marathons?" to which I said yes. Then he took out a £20 note and gave it to me for my fund-raising as his grandmother is in the late stages of dementia. Now if that isn't an example of the power of attraction, or what goes around comes around, I don't know what is!

Then the sun came out and dried me off.


I carried on my run with a spring in my step and as I was feeling really strong I just kept up my pace throughout, running up the steep hills I usually walk up. At 15 miles I was nearing the shop in a local village so I stopped my watch to get a paper and couldn't believe it was showing just under 3 hours for that route - which would usually take me around 3.5 hours. I didn't bother restarting my watch as I knew I had 5 miles to get home, going the long way round as it's only 1.3 miles using the direct route, so I did some power-walking for the last section. 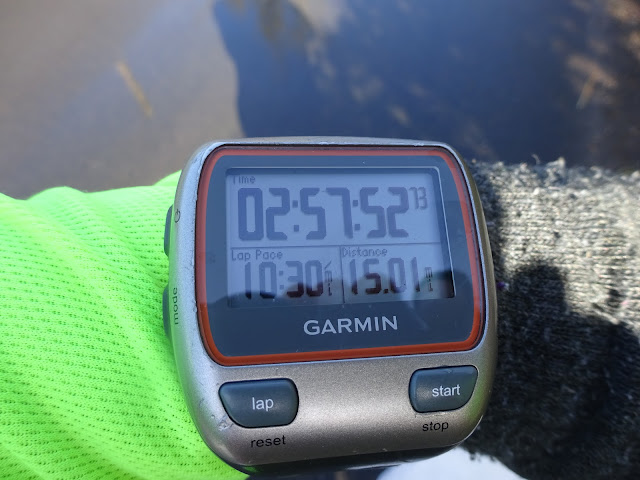 Lots of faffing here as I really couldn't make my mind up about the yarn I was trying out for my cardigan, nor could I decide on the yarn for my weaving course. I swatched and swatched for my cardigan and finally had to admit that I needed to buy some more appropriate yarn which rather defeated my pledge to knit from stash!

The cardigan is Saitama, by Martin Storey seen below in  orange but I'm using up some of my Kidsilk Haze stash in pink with a bit of glitter (which doesn't really show up too much) and was supposed to be using it held together with Rowan Fine Lace but I really didn't like the colour of the Fine Lace so I spent ages trying to find just the right colour. 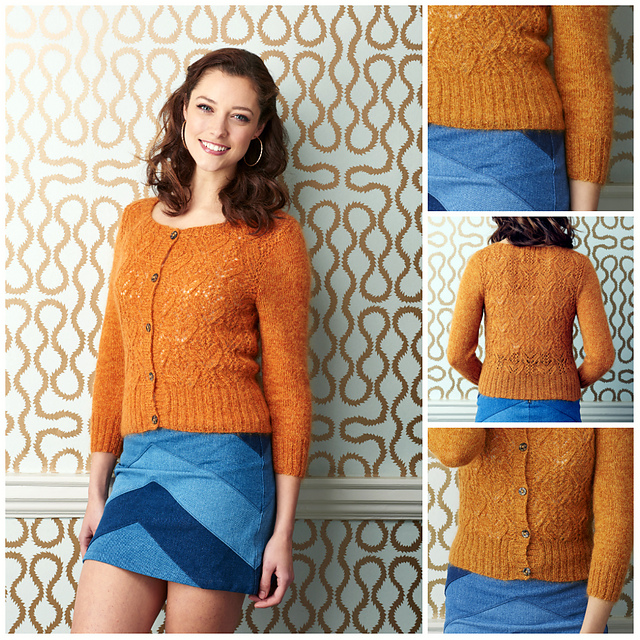 Just to prove my point about colours here are the same yarns taken in different light - the bottom photo is closer to the true colours: 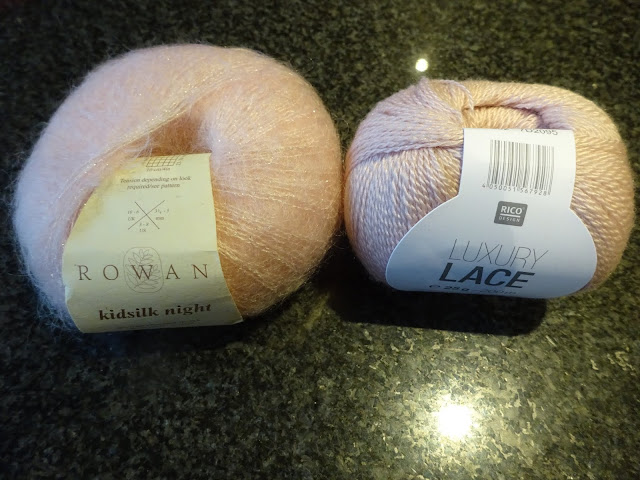 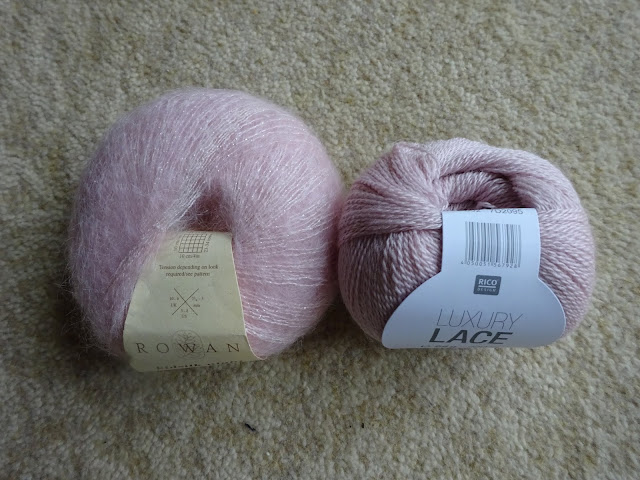 I'm really enjoying my 3rd wave of SPR in the Intensive group and can't believe we've only got another 3 weeks to go! I'm feeling really strong, especially in my arms and legs which can only be a good thing.

Shelley has been helping enormously with my 'Challenges' and she loves coming into the garage with me so she can explore everywhere. She disappears and then emerges covered in cobwebs, bless her. 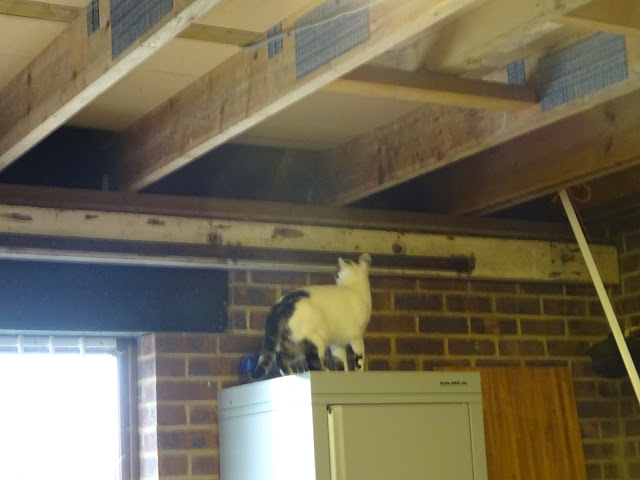 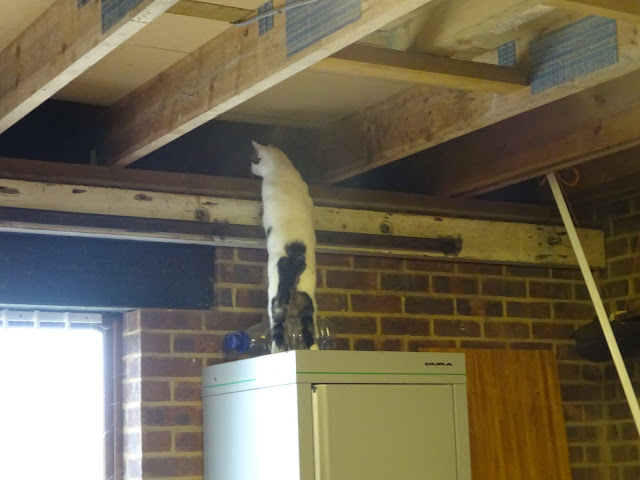 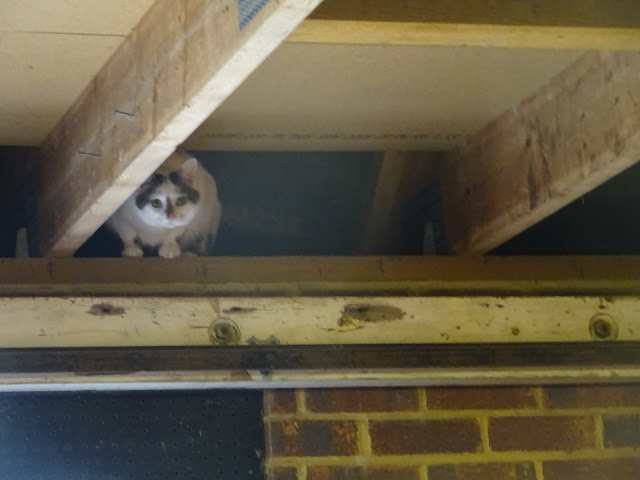 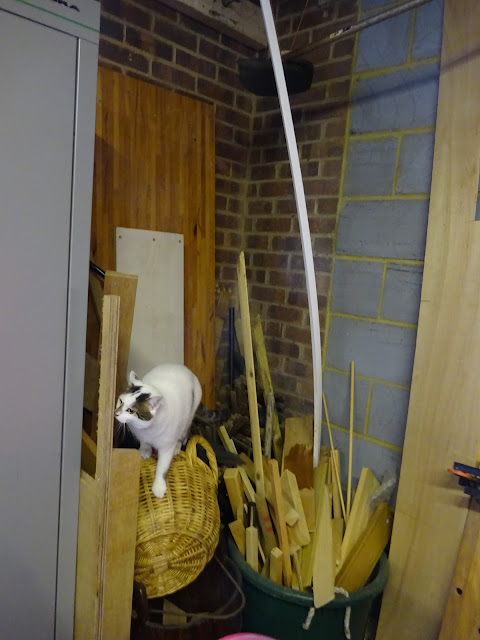 She also likes to 'help' when I'm doing my exercises indoors!:

I had some great news the other day when it was announced that Tikiboo had launched a new range of sportswear with 20% of sales going to ARUK to support their ongoing 'Share the Orange' campaign. How fab is that?!

Of course I needed some in my life  so here you'll see my new Yoga outfit which I tried out this morning:

Posted by Susie Hewer at 7:14 AM No comments: