Knots, a Special Tee & a Fond Farewell to our horsey guests

Getting tied in Knots


I forgot all about the short workshop/demonstration I went to a few weeks ago.  It was an Introduction to Macrame, the art of knotting to create interesting  patterns and my mum used to do it back in the 1960s/70s. I still have some of her old books about it but you can't beat a hands-on demonstration to get the creative juices flowing and I have wanted to have a go at it for ages. 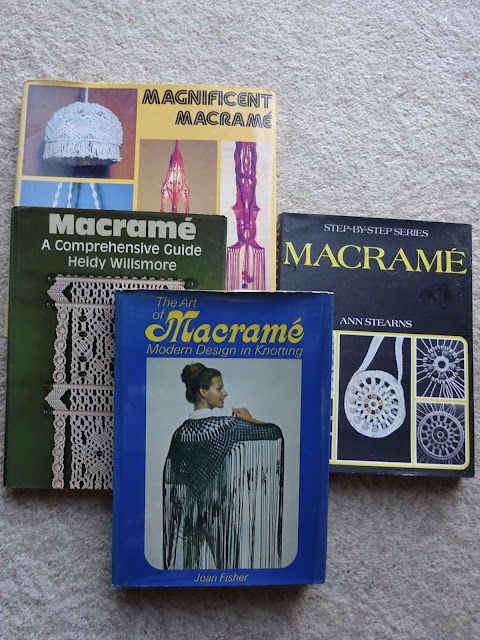 I've signed up for this course 4 years in a row but each time in the past it's been cancelled through lack of interest so I half expected it to be cancelled again but this time it was OK.  It was held in Uckfield in a room adjacent to a Farm Shop so as I always arrive way too early I had time to mooch around beforehand. 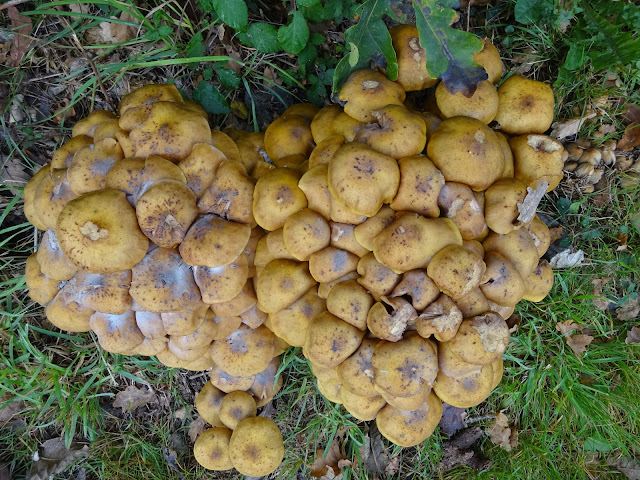 Once everyone had arrived and we'd settled down with a cup of coffee we started to play.  There were 2 ladies who were in-laws, an older lady with her daughter (which reminded me of the things I used to do with my mum), a lady who wanted to make bracelets for her grandchildren, a middle-aged man  and me.

The lady leading the group was very nice and friendly but not especially good at explaining things and when she demonstrated the techniques it was sometimes difficult for some people to see exactly what she was doing. 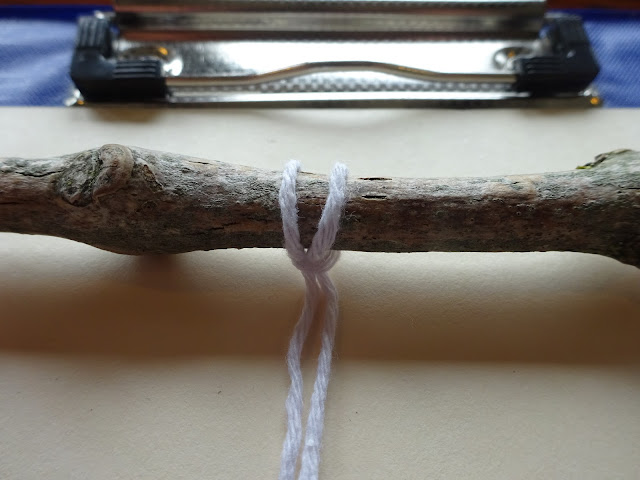 Then we had a coffee break before she left us to choose what we wanted to create next and all the others started to make friendship bracelets with beads for their children/grandchildren but I wanted to master the knots before I embarked on a project.

So I played and I played until it all clicked into place.  The next 3 photos are a world away from the mess I created at first!

Then I decided to experiment with Knot 1 above by using embroidery thread and cord to see what effect I'd get.  I absolutely loved it and the teacher took photos of my knots and showed them to everyone else. Ha, not the class dunce any more thank goodness! 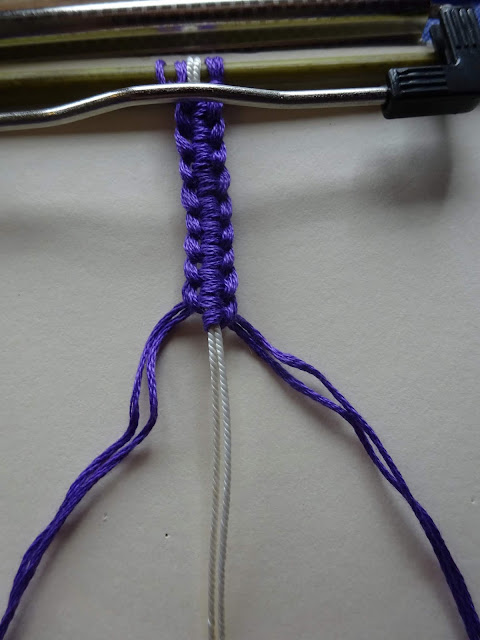 I haven't experimented with it any more yet but the technique is now in my head and I will have a few more goes before I tackle a specific project.

I have  a talk to do about dementia in the next few weeks and so I ordered a new tee shirt to wear for the occasion.  I love the colour and the brain pattern is quite edgy isn't it.  It is  a bit on the baggy side though but that doesn't really matter in the scheme of things. 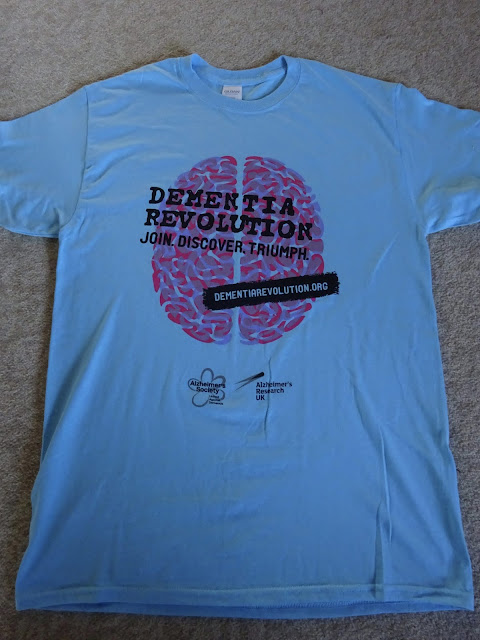 It's been lovely having Heather's 7 beautiful brood mares with us and I've thoroughly enjoyed getting my horsey fix every day.  Poo-picking is excellent cross-training!  But all good things have to come to an end eventually and their foals had weaned really quickly so it was time for them to go home (some to new owners in France, others to prepare for their next visit to the stallion, 2 already in-foal and will be ready for foaling early next year). 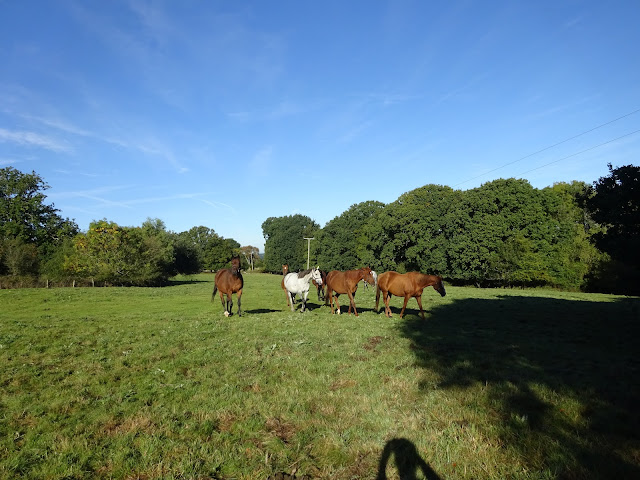 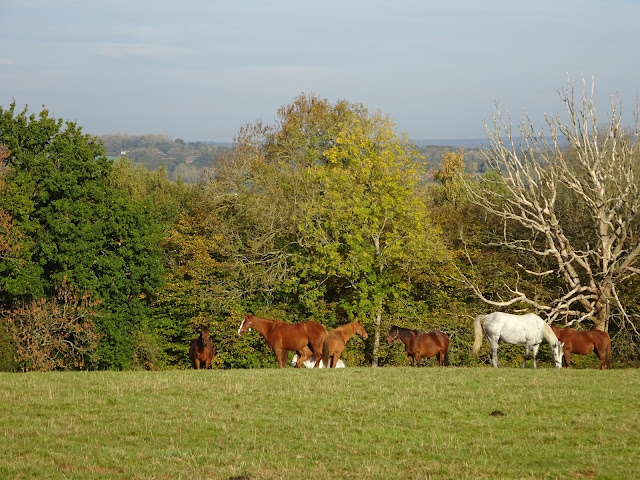 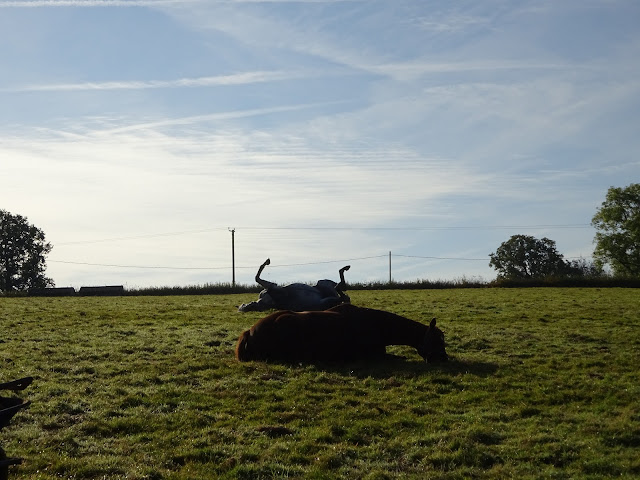 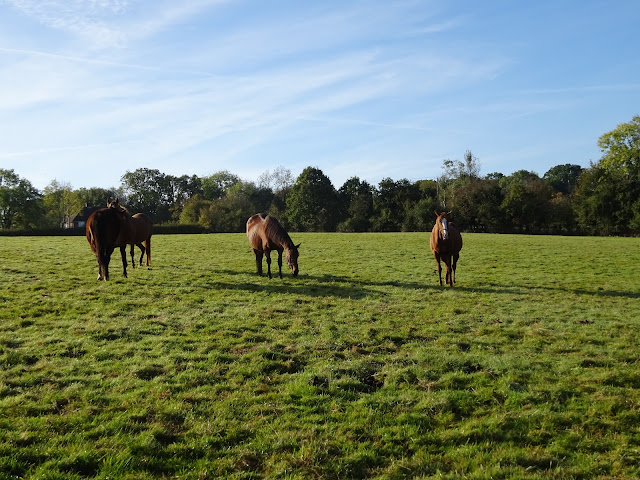 When Heather and her stable lady came to collect them, the lane was really busy with huge grain trucks at regular intervals, so I suggested they take them back along our drive rather than trekking the length of the lane from our far field which is .3 mile away and on a narrow stretch of the lane.  Each time 2 horses went, the others started calling like mad and when there was just Taffeta and Alsacienne left they galloped around like loons until they were all lathered up! 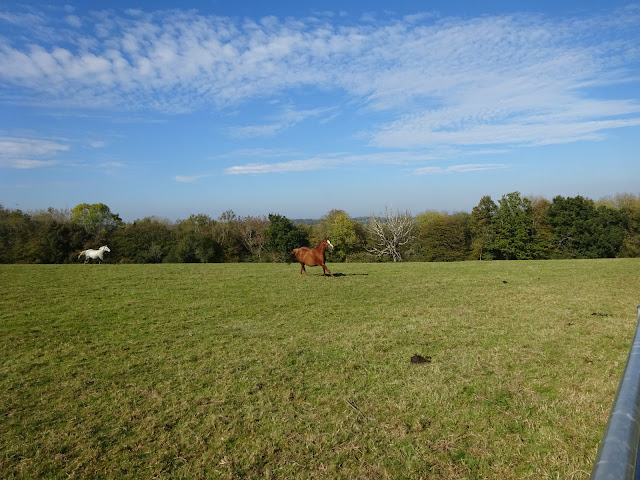 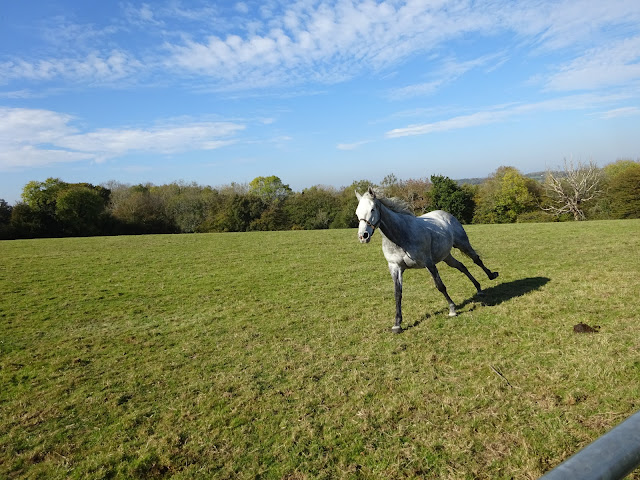 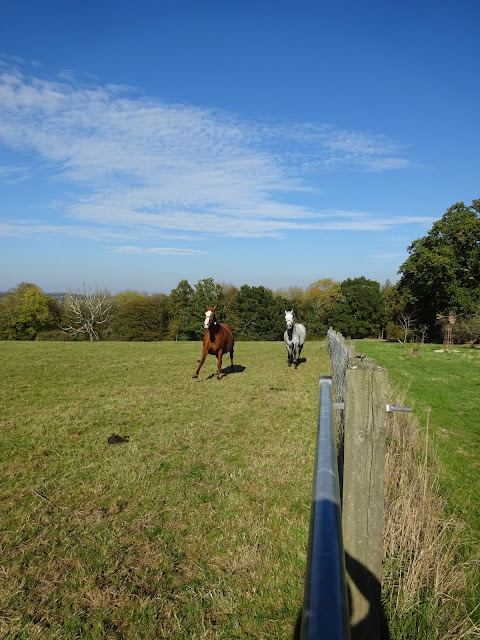 I offered to take my washing in but the horses were completely unfazed by it.

PS: yes, I did shed a tear or two when the horses left and I'm trying hard to resist the urge to take in some more rescue horses.

Just a quick update on Nick who I wrote about recently - yesterday he set another world record at Day 4 of Dead Running in New Mexico - 176 x 50ks in 365 days.  The man's a machine! 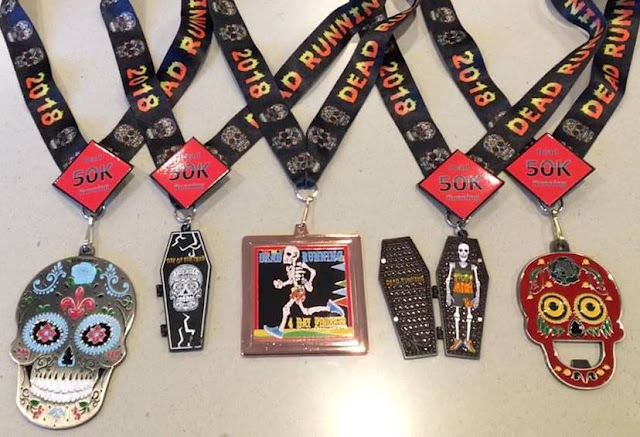 Posted by Susie Hewer at 5:16 AM No comments:

I loved the look of this shawl by Wood House Knits when I first saw it so delved into my stash and found the perfect combination of yarns: 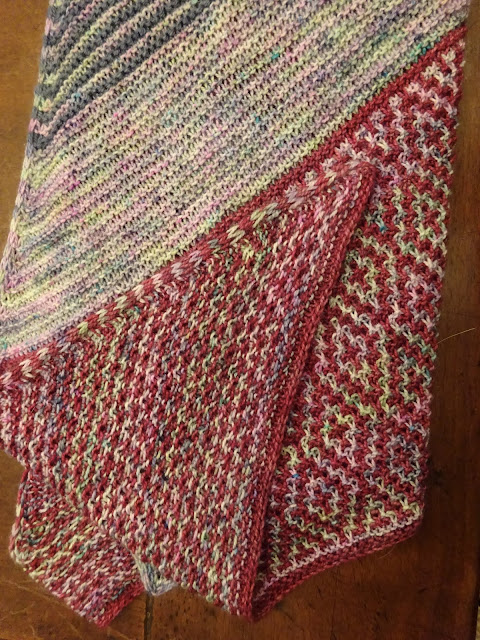 A few days before the Beachy Head marathon, Sussex County Council issued a safety warning because another huge crack had developed along part of the 7 Sisters (the group of hills we traverse near the end of the marathon). 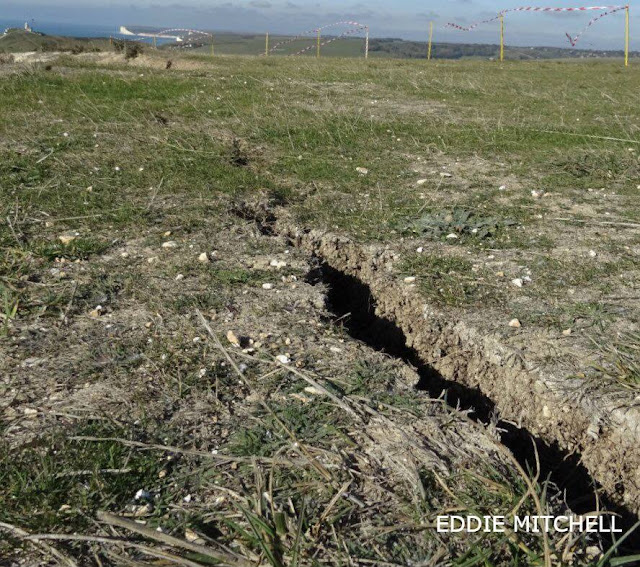 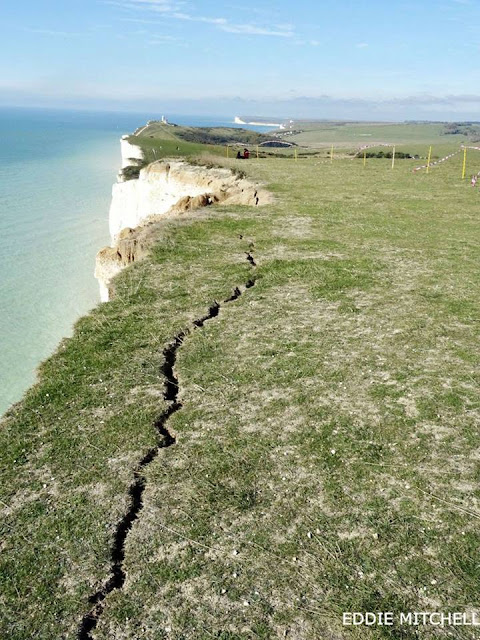 As a result of this the Race Director re-routed us away from that section but sadly some tourists still ventured close to the cliff edge! 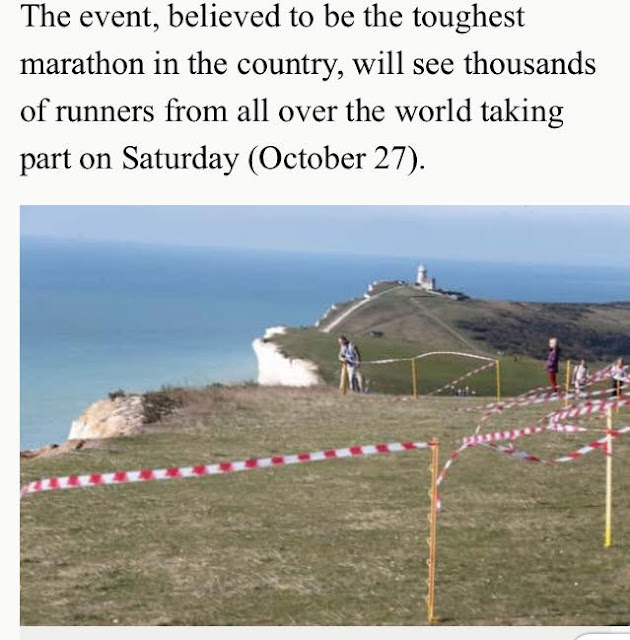 This is always a very sociable event with lots of runners I know taking part, plus of course the lovely Ant Bliss and his crew from Sussex Sports Photography taking photos of us. Traviss asked us all to wear our Mega Marathoners tee shirts so we could have a group photo at the start (I opted for my pink flamingo cap for a change!): 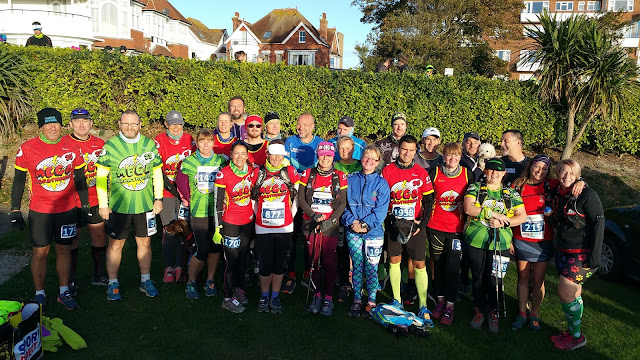 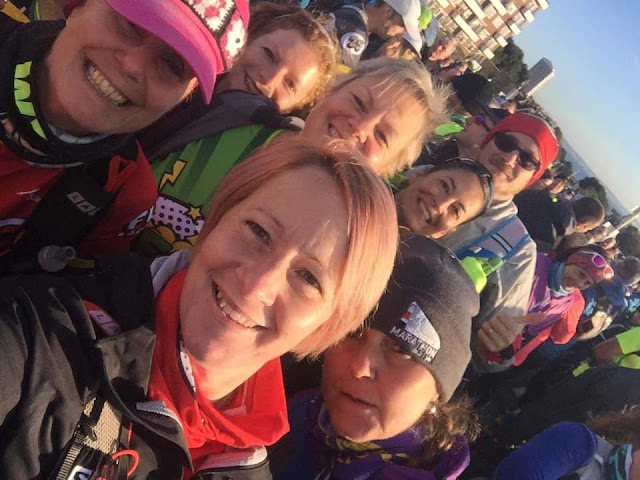 Although it was cold at the start, the weather was perfect with bright sunshine and just a bit of a breeze to freshen us up.  The views were stunning and I really had to resist spending all my time taking snaps.

It was incredibly congested at the start as it seemed that a lot of walkers had started too near to the front and after we'd scrambled up the first hill it was impossible to get going properly for the first 1.5 miles.  There was also a hold-up at each road crossing.  No worries though as I wasn't looking for a specific time, just a lovely day out in the beautiful countryside.  I chatted with lots of different people throughout, got hugs from marshalls/chums and a kiss from Ant when he spotted me coming towards him as he crouched down taking photos.

Here are my photos taken at various intervals throughout: 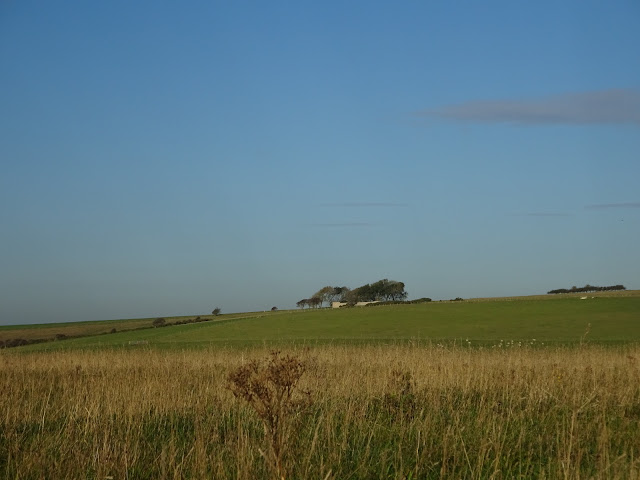 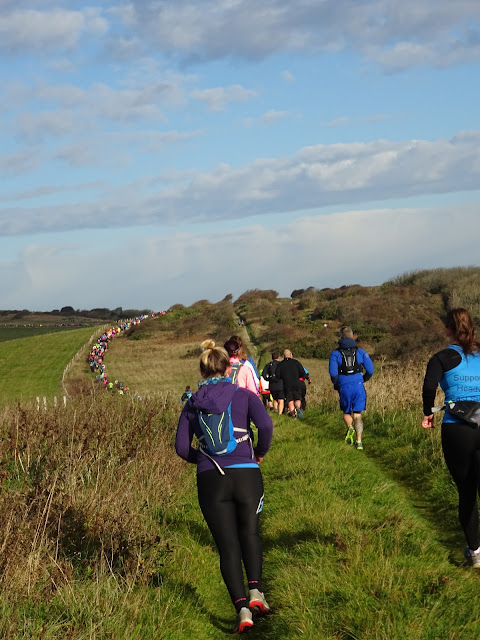 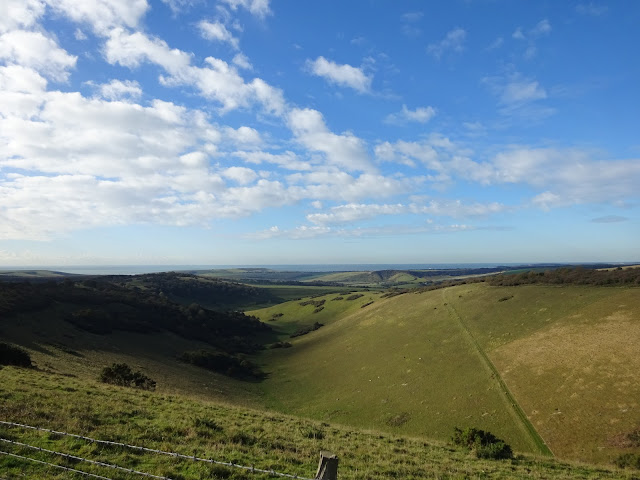 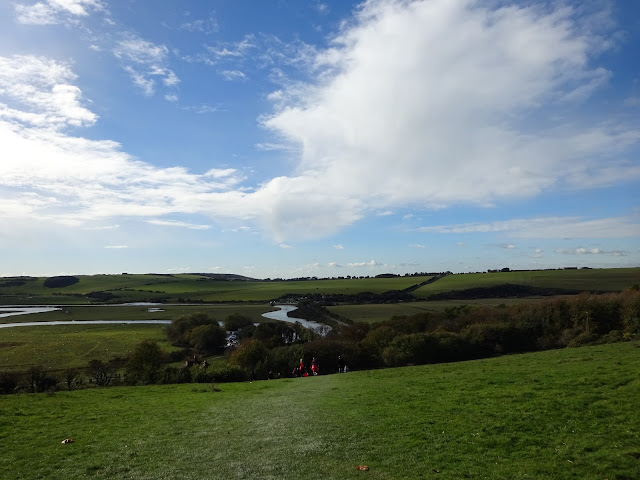 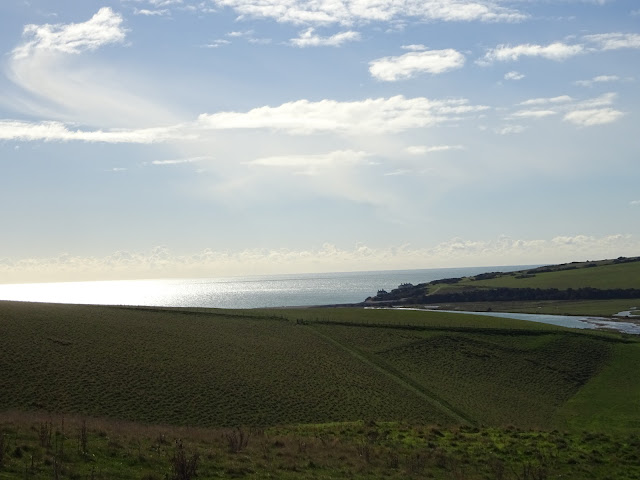 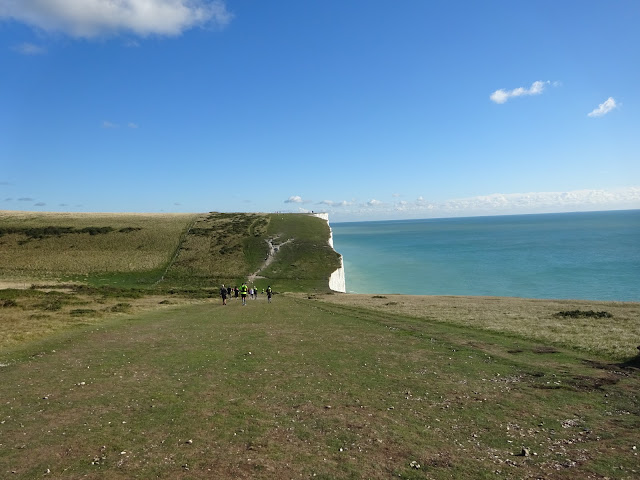 Posted by Susie Hewer at 4:04 AM No comments: