Where have the past 3 months gone? I really haven't felt like blogging, even though it might have helped amidst all this devastingly gloomy and very sad news. I did start a couple of times but really couldn't find the words. It's just been so awful hasn't it. So many people dead. So many people whose lives have been changed irreversibly by this devastating disease.

I have no idea what 'normal' is any more.

All my fund-raising marathons were either cancelled, reschedued for later this year, or moved to 2021.

Almost immediately after my last blog post, Mike and I went into an early lockdown as a way of shielding as we both have 'underlying health conditions' (I hate that term). We both said we'd do this and that, things we haven't had time for but wanted to do, but we didn't. I had lined up several knitting and crochet projects, a new loom project, books to read and several on-line courses I'd had earmarked for ages.

I did none of the above. Nor did Mike do what he'd intended.

Instead, we set about revamping the front garden completely. We're still at it. I reckon we felt the need for being outdoors and doing heavy physical work to take our minds off the horrors affecting the whole world. I also started another wave of the Six Pack Revolution just 4 weeks after I finished the previous wave. I'm just about to reach the halfway mark and it's really helping me to focus on my health and diet in these strange times. I'm finding the community aspect of it very helpful too as we're all split into teams and share our exercise challenges together which means there's always lots of positive support. This is a revamped version of the orginal 90 day plan and takes just 75 days to get the same excellent results!

I have no idea where to start with this catch-up so I'll just have to put down things as I remember them! I had to look back at my last post to find out what I'd written about then and it just seems sooooooo very long ago, a different lifetime actually, because the way we're living now is nothing like how we did then or will for the foreseeable future.

Perhaps I should just share some photos with a little text to give a feel for what's been happening here? I'll give it a go anyway.

I'm ticking over with regular runs but nothing very long at the moment. I've taken part in several 'virtual' runs with my running buddies just to feel connected. The last one was with Centurion Running with whom I should have been running the South Downs Way 100 miler this weekend. The virtual event was over 5 days and you could choose to run distances of 5k/10/half-marathon/marathon/50k/50miles or100 miles which you could run all at once or spread out over the 5 days - I opted for 50 miles as I thought 10 miles a day was very doable. I had to get up really early to avoid anyone else so I was out the door each day by 4am and back by 6am! I got a sweet little wooden medal and it felt nice to be part of a community of runners with a wide spectrum of ability - the youngest entrant was 5 and the oldest 85! 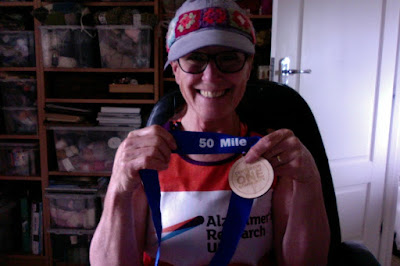 My next one is the virtual West Highland Way ultra-marathon which is 95 miles spread over 10 days so very doable without interfering with normal life. I started it this morning with a pleasant 9.5 miles and it should work quite nicely alongside my 6 Pack stuff.

In a previous post I wrote about the collaboration between ARUK and Tikiboo and I'm very pleased to announce that my blog about it is now live here. I enjoyed my 1st set so much I went and bought the other 2 as they are so comfy and I love the patterns; such fun! Each set of leggings has a matching bra top and I'm finding them really comfy for gym work and short runs.

Plus, I haven't shared this cute little skort (that's a pair of shorts joined to a skirt) from Flanci: 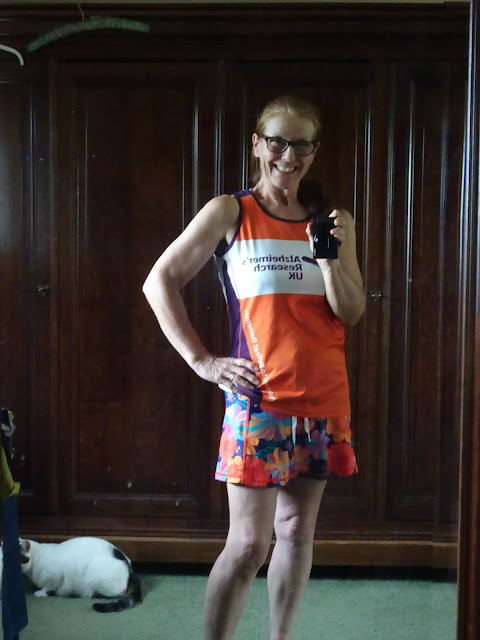 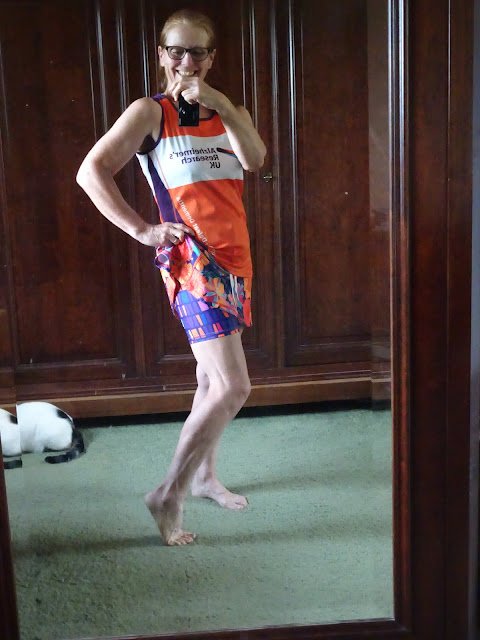 Crafting (or rather, the lack of!)

My cardigan started in early March is still on the needles and has only been picked up again this week. The crochet project I'd planned to do is sitting in a bag, partially completed.  The scarf I was weaving on my loom is finished so at least I've got something to show!

I'll definitely be making a few more scarves with stash yarn to send to the homeless charity in Hastings.

The large pot on the tree stump has been a great success, starting with the beautiful Crown Imperials early in the season, followed by these splendid Tulip 'Fly Away' and then Scilla Peruviana:

But the biggest front garden project at the moment is the creation of a shade garden (my project) and a path (Mike's project!). Here are a couple of snippets: 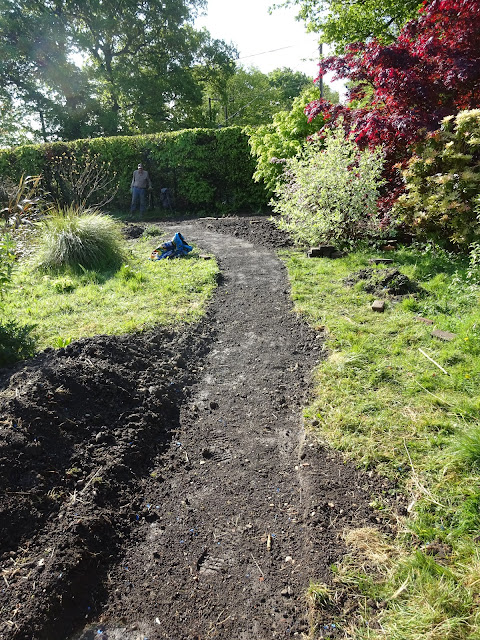 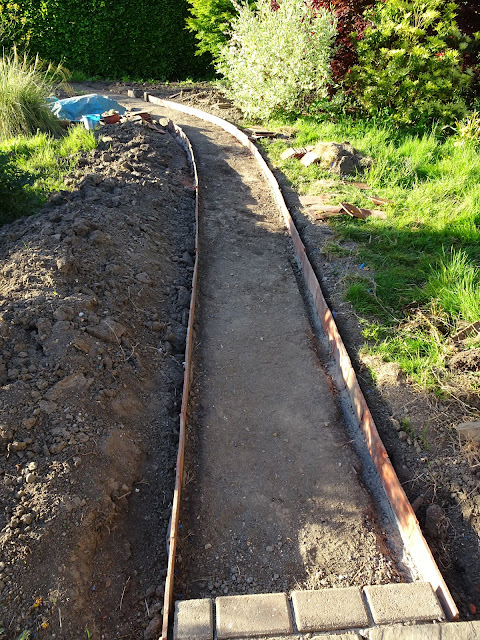 I think will have to do for now as there's so much I could share but not enough time right now.

Stay safe everyone.
Posted by Susie Hewer at 7:46 AM No comments: