Last Sunday was the Abingdon marathon. The one for which I've trained really hard all year. I was so excited about it and had tapered sensibly (reduced my mileage ahead of the race) but there was a fly in the ointment - I felt grotty for the whole week prior to the event. It felt as if I was about to come down with a cold so I dosed myself up and fought like mad!

The alarm clock rang at 4am and I got up feeling OK. I hadn't slept much the night before but that is not unusual. I had a long drive of roughly 2 hours 45 minutes ahead of me so I left at 5am and drove off into the darkness.

I'd only gone about 20 miles when I encountered my first twit of a driver. I was going up a hill towards a blind bend when 2 cars came round the bend, one overtaking and the other obviously trying to prevent the car overtaking by speeding up. Instinct kicked in - I knew there was a car behind me but that it was far enough back not to worry so I flashed my lights like mad and slammed the breaks on hoping that the airbag wouldn't come out. The fool who was overtaking managed to get past the other car and sped off whilst the other driver laughed and waved at me. What a pair of &6%4£@s!!!!

That did shake me a bit but I pulled myself together and drove on, arriving in good time so I had a cup of coffee and phoned home before heading off to the registration point. There I met lots of runners I've met before - Hippo, Blisters, One Blue Leg (who was doing her 100th marathon dressed as an old lady in a dress and wearing a grey wig!), Johnny Blaze, Jim the Plum, Mick'n'Phil plus I met lots of new people from the Fetch and RW sites which was nice.

It was jolly cold at the start and I was glad I'd worn a long-sleeved top underneath my running vest plus I wore my fingerless gloves which are great because they're small and easy to stash away if I get too hot. 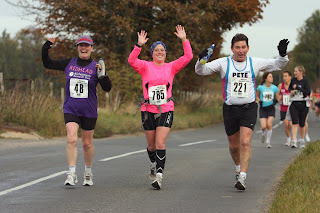 At 9am we were off. The race started and finished with a circuit of a sports stadium so I felt like a real athlete! As usual, I started near the back and quickly settled into my pace of 10 minute miling. It felt good and I was in a very positive frame of mind. Ar around the 2 miles mark I hooked up with Beders and Mitten from the RW forum and we struck up a conversatiion that lasted until mile 17 which really helped to pass the miles - but I'm jumping ahead of myself. Just remember mile 17 for later.

The course was a loop around Abingdon which is an attractive small town with prehistoric connections. I didn't have time for sight-seeing but the houses I saw looked very interesting. Then it went out along a couple of quieter country lanes although the scenery wasn't particularly nice. At one point we ran past a turkey farm where they were roaming free and they made such a noise as the runners streamed past; it was as if they were cheering us on.

I deliberately didn't take my camera with me as I was concentrating on beating my pb time of 4:50 set at the London marathon in 2006. The reason I had chosen this particular marathon was that it has a reputation for being fast and flat and therefore a good pb course. What I hadn't realised is that being a semi-urban marathon it involved lots of hopping up and down pavements and running with traffic (which I hate and is the reason I will never run the Thanet marathon again!). Plus, lots of the roads had potholes and the pavements were very uneven.

Anyway, the company was nice and we held a good pace, reaching the 17 mile mark in 2:50 which is spot on 10 minute miling. Now this is why you had to remember '17' because this is when my right ITB band started to twinge and my hamstring began to cramp. I tried desperately to ignore it as I couldn't believe it was happening again. This is an old problem that I thought I'd overcome as it hadn't surfaced since my very first marathon at Loch Ness in October 2004. Suffice to say that during that marathon I had to literally drag my leg for 13.5 miles in order to finish. So it was with great sadness that I told Beders and Mittens to go on ahead whilst I slowed my pace right down.

I could quite happily have curled up at the side of the road and sobbed it was so painful. Giving up was not an option as people have made donations to the Alzheimer's Research Trust and I couldn't let them down so I had to get my head together and struggle on. 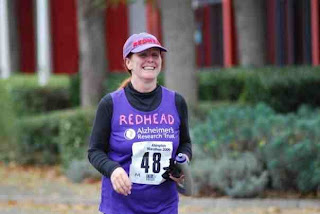 So struggle on I did, watching all hopes of a pb disappear with every painful step. There was little crowd support en-route but the people who did come out were vociferous and generous with their encouragement. This photo was taken by the lovely RichK at FetchPoint where the fantastic Fetchies cheered and clapped everyone who passed through, Thank you to all of you as you really helped when the going got tough. A massive thank you also to RichK who I have chatted to on-line, since I started running 7 years ago, and who has taken photos of me at various events but who I had never actually met before. Thanks for the hug and kiss and good luck (you know what I mean). 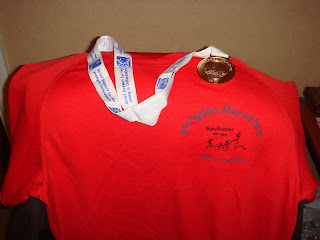 Finally I neared the stadium and my watch told me that I was very close to my pb time but I simply could not speed up. As I worked my way around the track I heard several shouts of 'Redhead' from the stadium and I saw a group of forumites waving and cheering. My smile got bigger and bigger as I neared them and I gave a massive wave as I headed towards the finish. As if that wasn't enough, the lovely Ant Bliss from Sussex Sport Photography was there snapping away and he gave me the biggest hug ever after I crossed the line. There are loads of photos of me on his site if your enter my number - 48. I should mention that I first saw Ant when I was doing my 7 marathons in my 50th birthday challenge and he took photos at several of them so he's seen me looking much worse than this!

I don't know how I missed this post - it just showed up in my bloglines today, as new.

So sorry to hear about your knee problem: I know how that is. When I was a child I fell and cut just under halfway through my leg, right at the patella...the bone was neatly bisected! It still aches in damp weather (which, as I live on the north Pacific, is 9 months of the year).

And now I've just reread your post and realised it wasn't your knee at all, so my whole story up there is a propos of nothing.

Also sorry about your pb, that is so frustrating. I used to be an athlete so I know the struggle to shave off those stubborn seconds!

Found your blog :-) Well done at Abingdon, I know it's frustrating getting so close to a target but having just missed it this time I'm sure you'll achieve it the next.

It was so lovely to meet you too after all this time, let's hope it's not a further 7 years or so before our paths cross once more.

Thank you for your kind words too - quite unexpectedly I had a number of key conversations that day and as you know have made quite considerable progress in the short time since.