It's all go now

Last week was rather busy with media stuff - On Friday morning I did a live interview with Danny Pike on BBC Radio Sussex which I'll try and put on here later ( not having much success so far!). They had being doing a live interview/phone-in with Gordon Brown and I came on after that. Many thanks to my boss who allowed me to do this in his office at work.

Then there was an interview with the Kent and East Sussex Courier plus an added bonus in that the Hastings and Battle Observers both printed the Press Release from the Alzheimer's Research Trust.

On Friday evening Mike and I drove over to Brighton to do a quick live interview with Simon Parkin, the weatherman for ITV Meridian. That was fun! 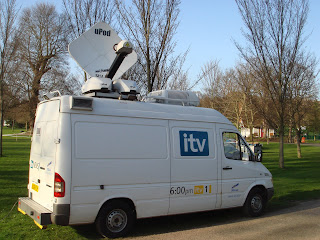 Apparently vans are in short supply at the moment as everyone is out and about following politicians ahead of the General Election so I think this one deserves a photo.

On these occasions there is always a lot of hanging around waiting - not at all glamourous. Mike and I got there early to avoid the friday night rush on the roads. This meant there was even more hanging around to do and after we'd walked around the park we just went and sat in the car until it was nearly time. 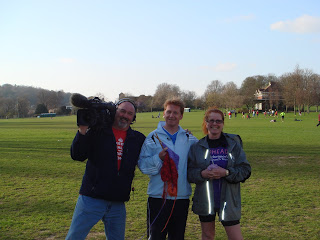 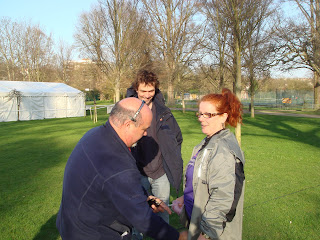 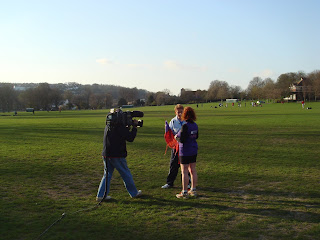 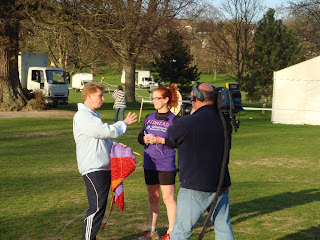 The microphone was attached to me.

I explained that knitting involved 2 sticks and crochet only had one hook. It's not easy explaining everything in about 1 minute!


I took one of my scarves with me which Simon wore and we chatted briefly about my plan to crochet around the London marathon.

Sadly this lead to a bit of confusion at the Brighton marathon as people kept shouting "Hey Redhead, where's your knitting?!"


We stood in our places to check the light/shadows/sound levels etc.


More about the marathon to follow, suffice to say it was FAB.
Posted by Susie Hewer at 4:08 AM