Sky 50 above the Mersey (Friday) 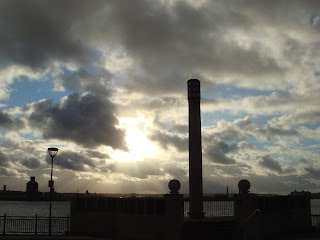 OK, so the early night and sleep didn't help at all and I felt really grotty throughout the whole 6 hour journey. Ho hum, these things happen and you just have to get on with things! 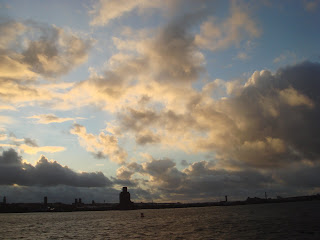 The weather was fine when we arrived but the wind was very strong.

We unpacked quickly and headed out for a bracing walk alongside the River Mersey.

That certainly blew the cobwebs away but it wasn't at all cold so we enjoyed it.

It also gave us a chance to have a quick look around some of our old haunts. 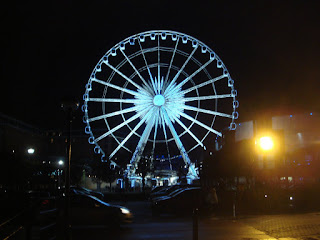 But that was just the start of our exciting weekend and we had to get back to the hotel to freshen up ready to meet up with my old friend Denny and her partner Russell who we hadn't met yet.

On our way out we saw the this 60m high wheel which looked lovely illuminated. 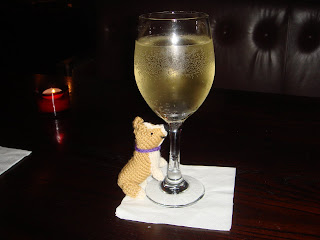 Now Denny is the one who gave me the idea of running and knitting at the London marathon when she suggested I should act my age and stay at home with my knitting! It was also Denny who sent me the Knit your own Royal Wedding book suggesting that I should knit her a corgi.

So Albert had his first outing to an Italian restaurant in the Albert Dock (named after Prince Albert, hence his name). 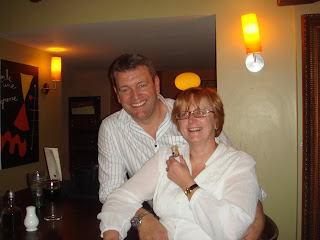 We had a very pleasant meal with lots of laughter and catching up.

Mike enjoyed the local lager whilst I had to be sensible and restrict myself to a couple of glasses of wine!

We then headed off to The Pump House for a nightcap before heading back to the hotel.

The sleep you have on the Friday night before a Sunday marathon is the most important sleep of all. You often have a patchy sleep the night before due to nerves and excitement so it's really important to get a good rest beforehand.

What I haven't mentioned is that the hotel room was very warm and didn't have a window that opened. Even though it had air conditioning, the minimum temperature you could change it to was 19 degrees which is way too hot for us.

We'd asked to be moved but there were no rooms available that night (probably because there was a Rhianna concert at the Echo Arena nearby) so the maintenance man brought us a fan to help cool things down.

Well, with the noise from the air con unit and the noise from the fan it was like trying to sleep in a factory! Mike drifted off eventually (helped by alcohol I suspect!) but I tossed and turned and became more and more anxious. My throat was very dry, sore and swollen and my head was pounding.

The last time I looked at my watch it was 3am and we were up at 6am. I looked like death and I was very teary. We went down to reception and asked to be moved to another room and they eventually found us one. They also refunded the cost of that dreadful night as they have a policy that guarantees a good nights sleep. I think they took one look at me and realised they were about to have a weeping woman on their hands.

The new room was wonderful with windows that we could open and it was much cooler even without opening the windows. Phew!
Posted by Susie Hewer at 2:39 AM