This morning, David Cameron made a very important announcement at the Alzheimer's Society conference. He spoke about 3 themes in dementia; of improving health and social care, public awareness and involvement, and stepping up research. Mr Cameron expressed his ambition to tackle dementia as a “personal priority”.

I heard about this last week and was overwhelmed with joy when I heard that the amount of money allocated for research into dementia would be doubled.

Of course this information was embargoed until after his speech and so I was unable to write about it until now even though I wanted to shout YIPPEEEEEEEE from the rooftops! All of a sudden it feels as if our lone voices have been heard and someone has realised that dementia is a ticking timebomb for our ageing population and the issue must be dealt with now.

So now I feel as if my marathoning and constant campaigning to raise awareness have not been in vain. I hope all the others who have done the same and more will feel as if there has been some progress at last. Long may it continue.

This news has really given me renewed hope and I shall run my marathons with a determined stride, defeating dementia with every step.

Onwards and upwards as they say.

The weather is still very warm and dry which is a concern as the South East has been declared a drought zone with a hosepipe ban coming into force next week. Our water butts are nearly empty, ponds and rivers are drying up and with no rain forecast for the foreseeable future things are not looking good for wildlife, gardeners or farmers. The lack of water doesn't seem to have stopped the weeds growing though and I seem to be fighting a losing battle with them in the front garden! 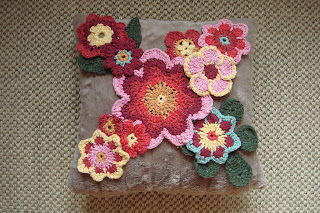 When not in the garden I have been busy crocheting leaves. Lots of them in all shapes and sizes. None of them seemed right. I crocheted all of the leaves in my flower book but with the exception of the fig leaf (seen here, bottom right) none of them would do.

I then resorted to my 1970s crochet books for inspiration and lo and behold I found several of the designs in my flower book had been copied and given different names! I still didn't find what I wanted and so I experimented. Long thin pointy leaves, short fat round ones, ferny ones etc etc until finally I created the 2 seen here top left.

After much arranging and rearranging of flowers and leaves I pinned them together ready to sew. Next I'll start crocheting around them to fill in the background then think about what will go on the back of the cushion. Crochet? Curtain fabric?

It's been great fun and I can't wait to start my blankets now. 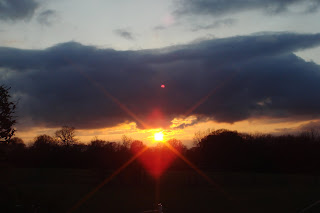 I caught this sunset a few nights ago and I love that the glow has created a heart underneath the sun!
Posted by Susie Hewer at 12:06 PM