The Pride of Britain Awards

The week started well when Alzheimer's Research UK nominated me for a Pride of Britain award. I was humbled to have been put forward but thought no more about as there will have been thousands of nominations from all over the country. Little did any of us know where it was going to take us!

Then the phone rang and I did an interview with the Daily Mirror for an article entitled 'Wacky Raisers' (a pun on the old American TV show Wacky Races - I used to love Muttley!). So there I was, in the middle of the paper, a silly middle-aged woman with her knitting, next to a man who runs marathons with a fridge on his back and other amazing people.

The same morning that the article appeared, Chris Evans mentioned me on  BBC Radio 2 - how cool was that?! It's at 2 hours 22 minutes 24 seconds if you want to listen (it stays on there for 7 days).

Then the latest edition of Yarnwise magazine arrived in which there is an interview I'd done earlier in the year. It was a great article and Helen had included the details of ARUK.

ARUK then put a call-out on Facebook asking people to go and nominate me to help me get to the next stage by  completing a nomination form here.

Then the lovely people at the Virgin London Marathon put the details on their Facebook page too.

I've just taken a phonecall from BBC Radio Sussex asking for an interview early next week - oh go on then!

There are so many amazing people who do goods things for charity that the chance of me getting any further are very slight but we are getting some great publicity for ARUK which is the whole point after all.


This is where I'm up to with the first chairback drape: 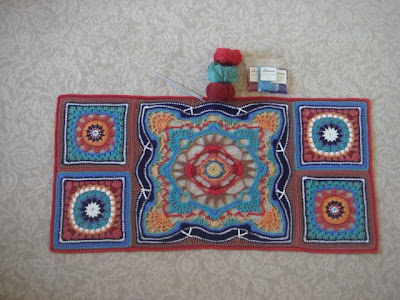 I've done 2 rows of double crochet all around in blood orange and poppy red: 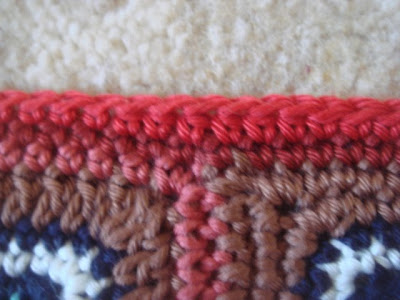 I like the effect of the 2 shades of red combined with the brown as I think they anchor the motifs in place and show them off nicely.

I've just been deciding the final edging detail so I looked at it on the carpet then against the chair itself.  I had to fold the top edge over the chair to keep it in place but it won't be like that eventually. 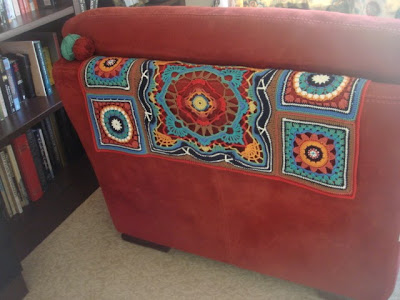 Having decided on the colours I shall be doing 1 row of blood orange and 1 of green slate all the way round. I will add some red beads into the final round.

Then I'll be adding a fancy border to the bottom and a plain border at the top.  The top will be tucked in over the top of the chair so that the whole of the motifs are displayed against the back of the chair.

I've been looking through Nicky Epsteins book and have found 2 that I like but will probably end up adapting them to suit as I don't want anything too fussy. 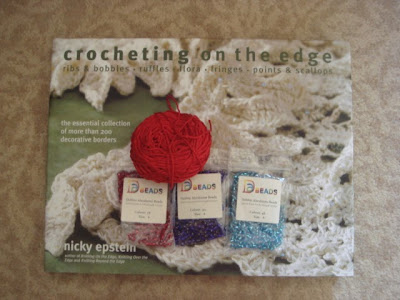 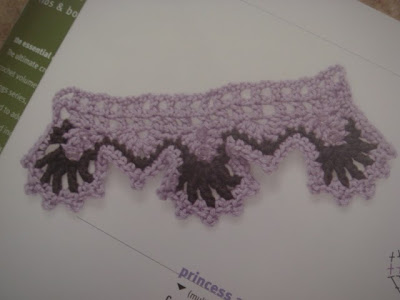 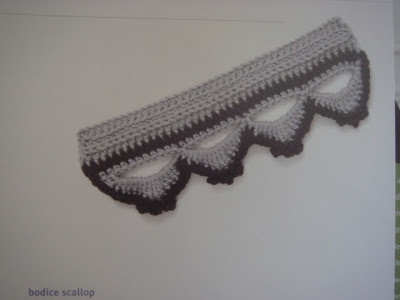 Wow, I really like that chairback! Aren't you clever.

I'm really happy for you about the string of mentions and interviews. That's what you get for perseverance!

Nice to see you again - my blog feed was discontinued by the provider and I haven't been online much lately.

Keep it up Susie!

Lovely to hear from you and great news that Avery is OK now.

Hello Susie,
I just saw you mentioned in tonight's episode of QI on BBC 2. I never knew you knitted on your marathons! Wow, very impressive! Hope you're well. Liebe Grüße Isabell Button