I'm still ploughing through my thank you letters to all my sponsors so please forgive me if you're still waiting - I haven't forgotten you.

I'm just embarking on a new phase of running, training for a faster 10k time at the Brighton marathon in November. My body feels good, even after my running streak, but I have fine example of a synovial bursa, aka 'housemaid's knee', on my knee.

This was caused neither by housework nor by running but by scrambling around on my knees doing gardening.  I always wear kneepads as I thought they would protect me but seemingly they didn't.

It looks as if I'm growing a new kneecap! 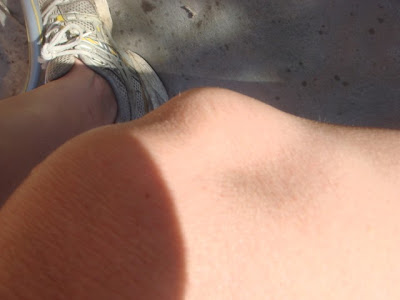 Thankfully it isn't painful and I'm hoping it will just go down eventually.

I got a fair way through the jumper I'm knitting but I kept thinking it looked rather large so I put in onto a thread and tried it on - it's way too big coming in at 40" without blocking.  I was making the larger size (it only had 2 sizes, one coming in at 31" and the other at 38.5") but even so it seemed way too big.  I did a swatch knitted in the round which was spot on the stated tension, as I know tension can be quite different from flat knitting, so it's rather annoying.

So I ripped it back and then realised I should show it so here's what was left when I had that thought! 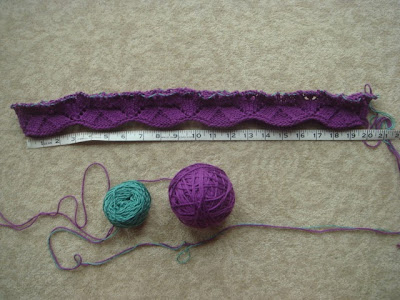 I want it to have some negative ease and I reckon I need to lose 3 whole motifs width which is even smaller than the smallest size so I'm going down .25mm needle size too.  Let's see how that works out.

The other morning I baked thee bacon and onion fougasse for Mike (I'm a vegetarian so they don't appeal to me).  This is what they looked like when I went out for my run........ 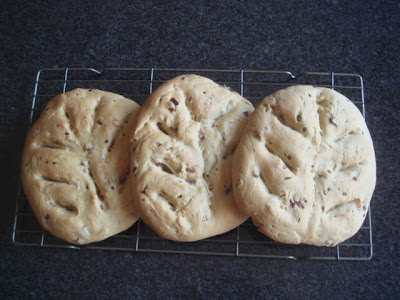 ..........and this is what they looked like upon my return. Mike said the smell was driving him mad and he just couldn't resist! At least it shows that he enjoys my baking. 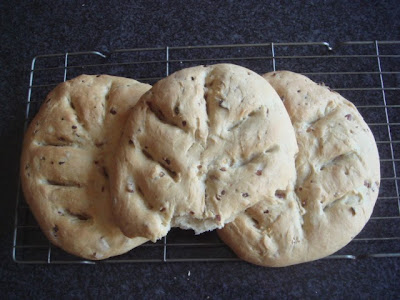 The weather has been glorious recently and last night the sky turned the most beautiful shades of red and purple. 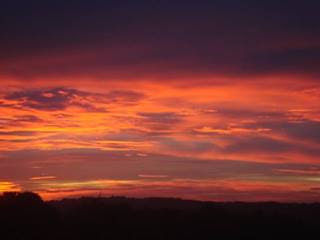 Tinker is still with us but his lumps are very big now and he doesn't like to go outside on his own.  We've developed a new morning routine whereby I feed him, do some chores whilst he's eating, and then we go outside for a wander round the garden together. 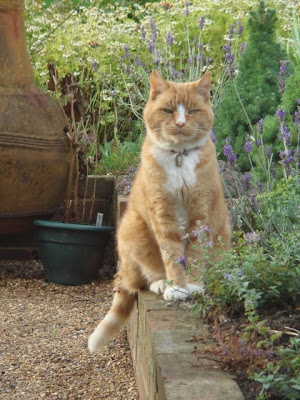 He potters around and has a drink out of puddles or the pond, nibbles on some catnip, and then we  head back inside where he settles down for a well-earned snooze. Precious times. 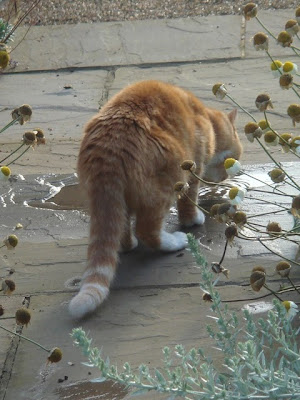 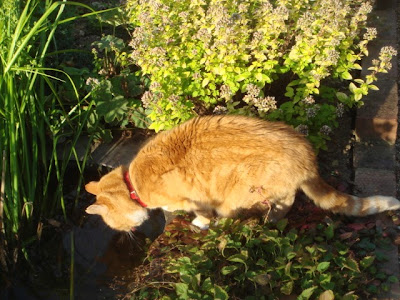 Hi, just catching up on your posts. You are an amazing inspirational woman. Congratulations on your well deserved awards and thank you so much for your encouraging comment over at mine.
Love your crochet too.
I'm off to add you to my blog list so I don't miss your posts for so long in future.
Jacquie x

Hi Jacquie,
Thank you so much for your kind comments. Good luck with your training and please let me know if you need any advice. Susie x