Today I am running around doing things that need doing at home as the next few days are going to be rather busy.

On Sunday I shall be heading off to NE Kent at the crack of dawn (well, before dawn actually!) to run along a windy seafront for 26.2 miles. At the moment I'm too busy with other things to worry about whether I'll manage it as there's sooooo much to do.

I realised that I needed to think 3 days ahead with my baking and food preparation so at the moment I'm having a coffee break whilst waiting for 2 loaves to finish proving before I can start preparing for our evening meals. Tomorrow is OK because Mike loves to help in the kitchen when he can and so we're having fajitas which means he can do all the chopping of vegetables whilst I'm out. I've already got a batch of spicy beans made up so that all I need to do is make some tortillas when I get home whilst his chicken is cooking. Homemade tortillas are nothing like the processed ones you can buy and take very little time to make. I'll try to remember to write a recipe for them when I get a moment.

Monday and Tuesday I shall be heading off to London each day for the launch of join dementia research which will either be extremely busy or will involve a lot of hanging around, you never can tell with these things. I'm hoping that the media will be interested as there is so much about dementia in the News at the moment - this morning the Alzheimer's Society announced that their 'dementia friends' campaign has now got 1 million volunteers which is brilliant.

The other exciting announcement was this:


'Leading the world'The government has announced that it will be spending more than £300m to tackle dementia in England over the next parliament, as part of plans which include:

Mr Cameron said: "Dementia is one of the greatest challenges of our lifetime, and I am proud that we are leading the world in fighting it."

I knew there was going to be some sort of announcement from the furtive phones calls I received late yesterday afternoon asking about my availability over the weekend! What a great start to the weekend and I shall think of this to spur me on if the going gets tough in my marathon tomorrow.

In other news I've been playing around with the curtains tie-backs I stitched. I found a nice wooden frame I'd bought a while ago and it fitted part of the tapestry in rather well. Now I've just got to mount and stretch it onto the backing then it will be going on the wall in my Craft room to remind me that Spring is on the way. 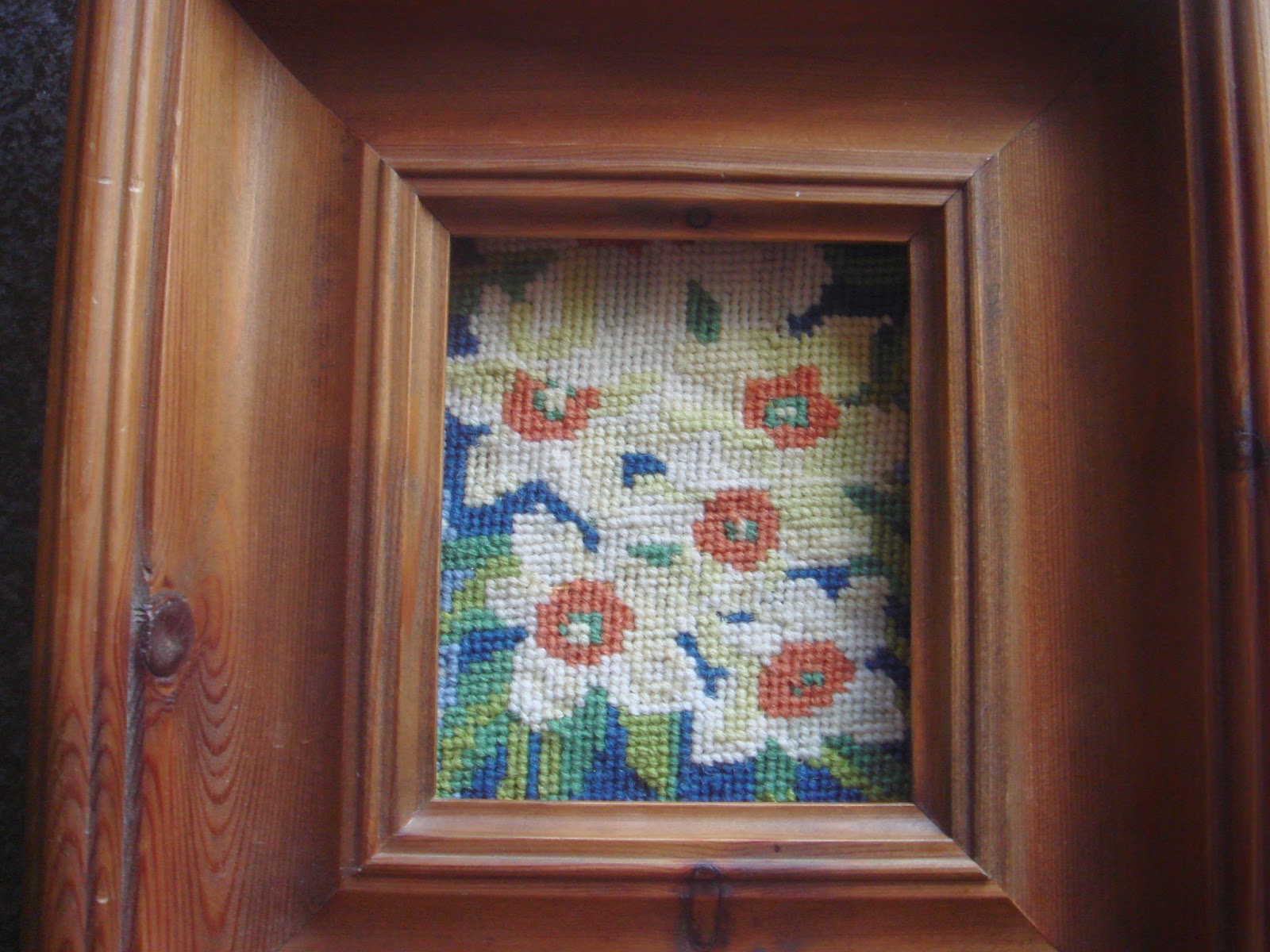 The frame had this watercolour in originally and I thought it was a print but when I took it out I found it was a greetings card. 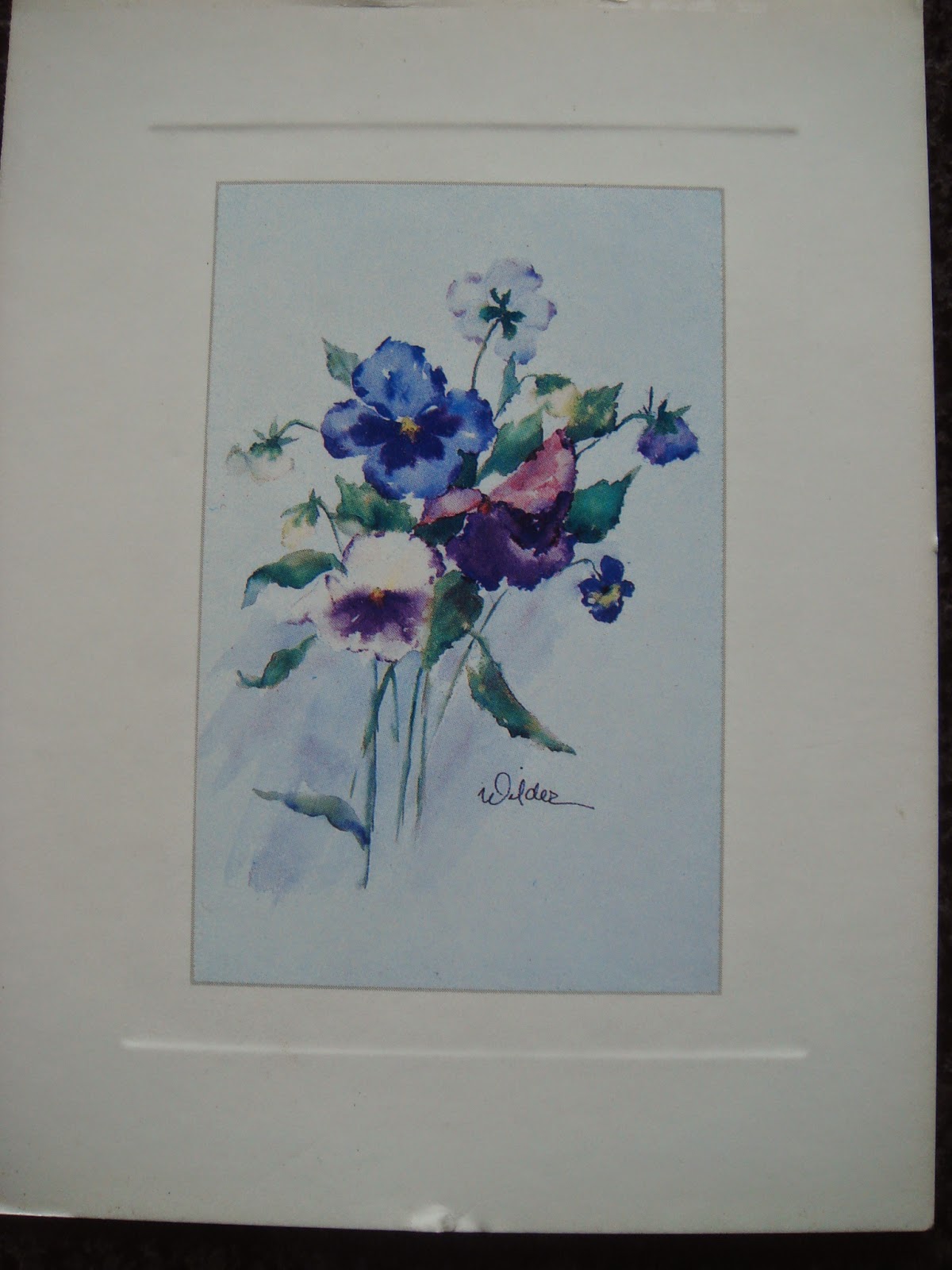 Inside was this note: 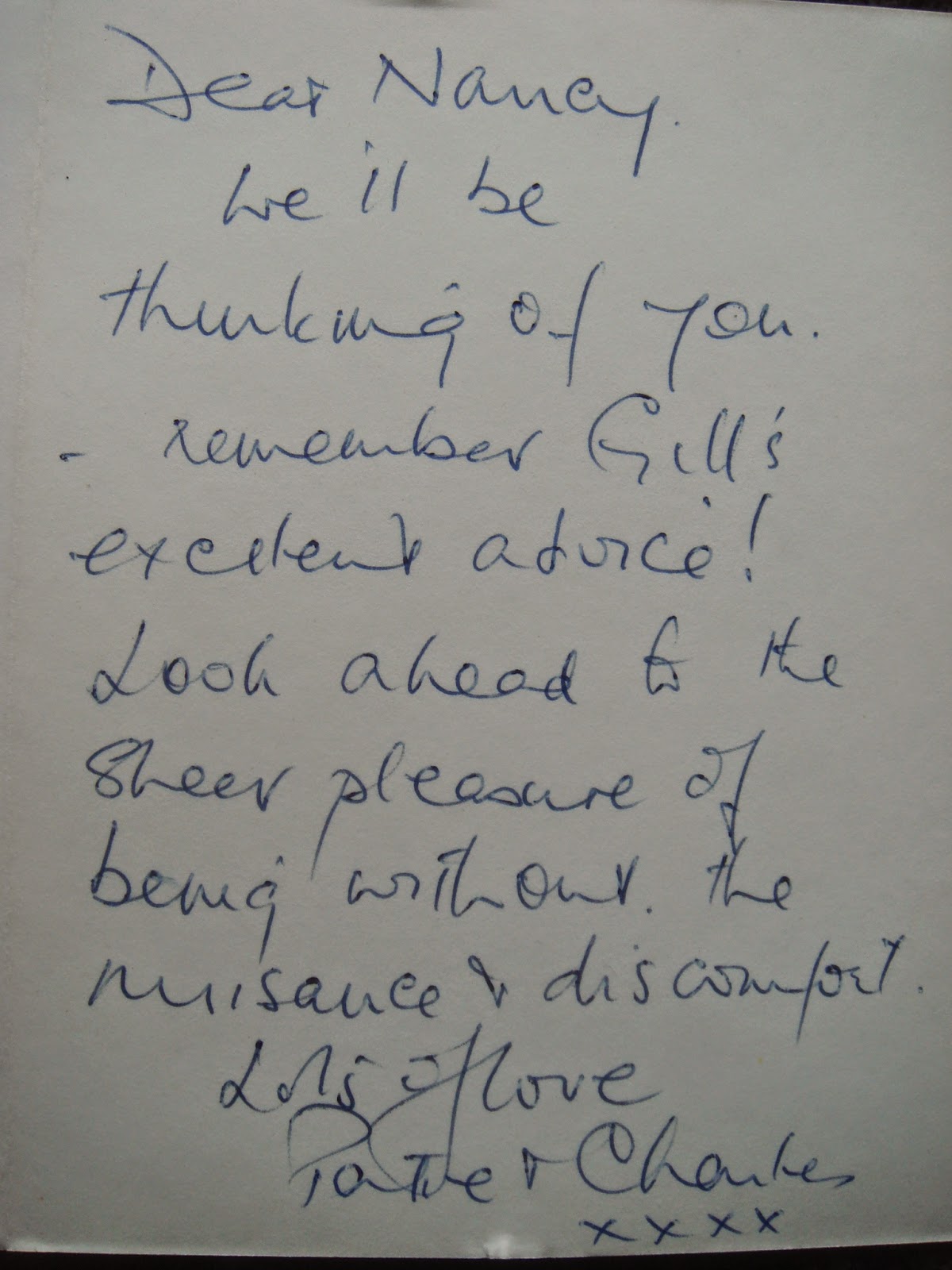 Whoever Nancy was, this little note must have meant a lot to her, possibly when she was about to have some sort of operation or procedure, as she had it framed professionally. I felt privileged to have peeped into someone's precious memories.

On the crochet front, I'm getting on nicely with my latest project and am undecided whether to take that or my remaining sock with me on my train journeys next week. 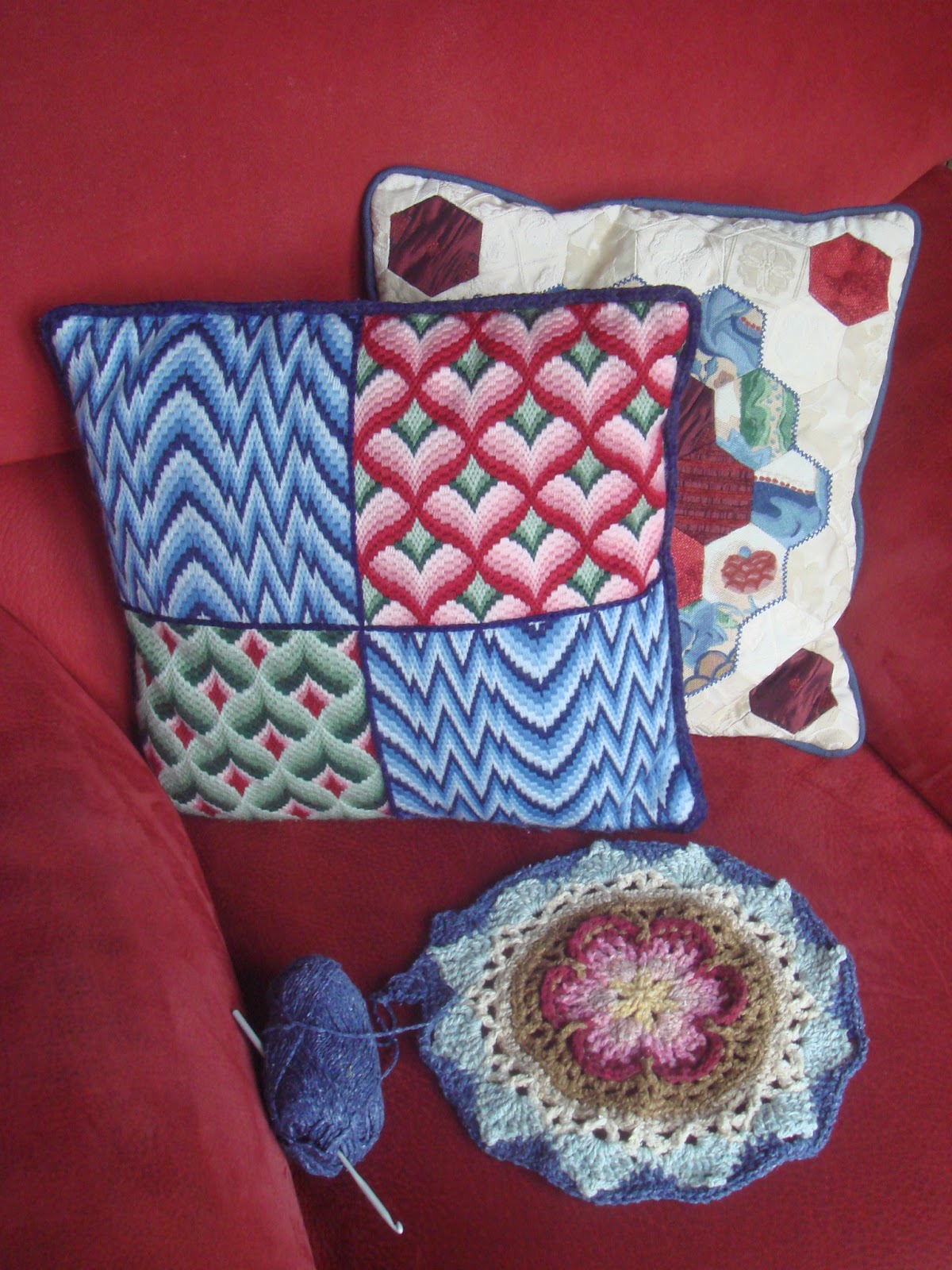 The colours I've chosen are based loosely on the curtains/blinds in the lounge. I'm using Rowan Summer Tweed, which is now unfortunately discontinued, with a 4mm crochet hook. Thankfully I have a lot of it in my stash. 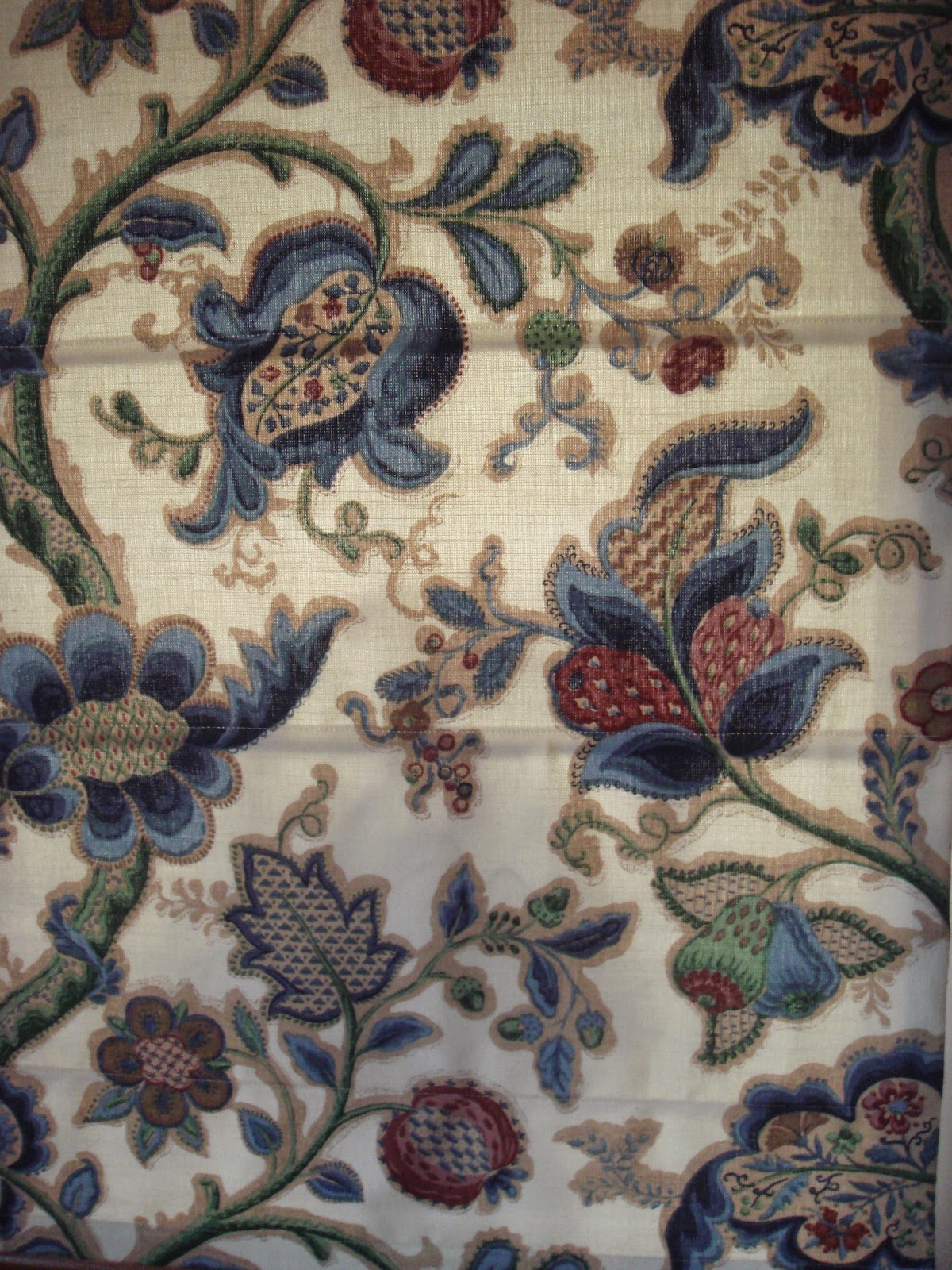