Dear Blog,
I'm very sorry for neglecting you but the sun has been shining and I've been playing out!
Lots of love,
Susie
x

I know, I know, this is what happens all the time in my world. I'll do a flurry of posts and then disappear off the planet for an age. It's always the same even though I try hard to be consistent in my posting. Hey ho.

This if course results in a mishmash of a post in which I try to cram in everything I should have written about but haven't and inevitably miss out some things. I have taken 547 photos in the last couple of weeks and choosing which to show is always really difficult.

Here I go then, in no particular order.

First I'd better catch up with the Sophie blanket which is now nearing completion. Here I am at work on the butterfly border with a Tilly cat accoutrement:


In other crochet news I've been making something for my friend Terry to decorate what's known as the Navigator's Hat: 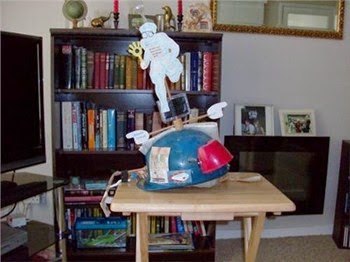 Terry is a member of the Hardley Runners club and last year he was awarded the hat because he got lost on his way to a training session! It is a tradition that the person receiving the hat adds a decoration to it and Terry asked me if I'd make him something. What fun I thought, I'll knit him a runner, which I did using a pattern from Knitlympics which my friend bought me. Then I wondered why on earth I'd done that as there's already a runner on the top of the hat - DOH! I gave it to a friend for her grandson. Then I started to think about how Terry is an excellent training partner for many people at the club as his pacing is excellent. I crocheted a clock face but didn't like it.

Then someone suggested I make a metronome and that's when the solution came to me - he deserved a medal in his honour. I wanted to make it big and bold so I attacked a biscuit tin with my giant cutters and cut out an oblong shape, folded it in half and bashed it together. 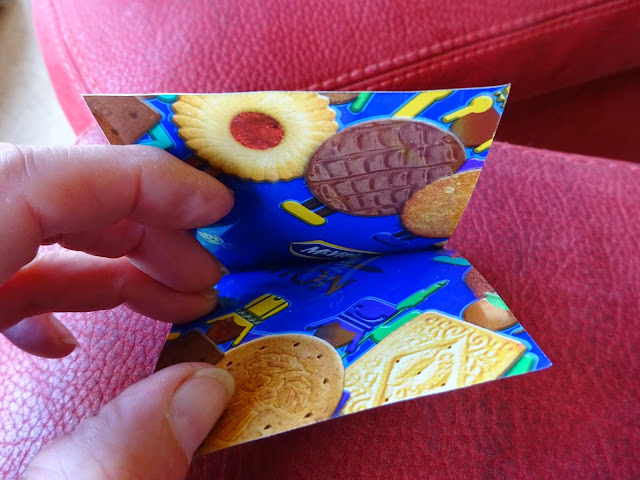 I wanted it to be square rather than round so I could make a granny square to cover the back of it plus a lot of race medals are round and I wanted it to be special. Choosing the colours was frought with difficulty as I was trying to get as close to his club colours as possible which often look quite different in real life so I'm hoping these are OK.


Then I wracked my brain to think of what to put on the front of it. Terry's name/initials/the date? Then it came to me - 'Your pace or mine?' with his initials. All I had to do was decide the best way to write it. Mike suggested punching holes, which I've done before, but the tin was rather thick and it might not have been very neat so I decided to print it on coloured paper - until Mike came up with an even better idea of prinitng it onto photo paper which allowed me to make the background blue and the lettering yellow (although it doesn't show up in the photo). Clever Mike! 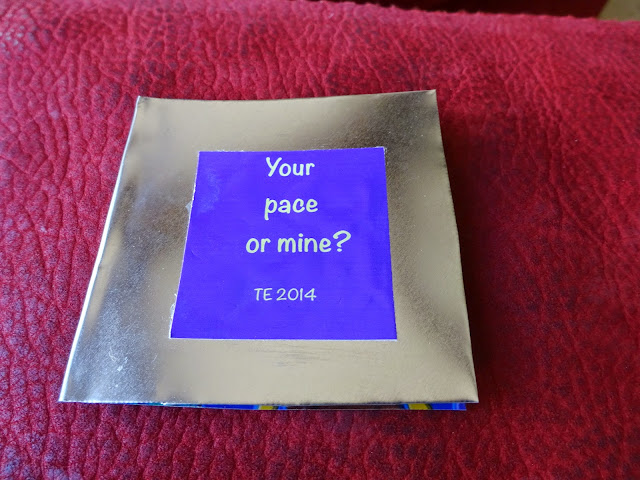 I stuck it on the front of the medal and proceeded to crochet around the front to enclose it. Then I stitched on the ribbon and adorned the bottom edge with some dangly grannies. 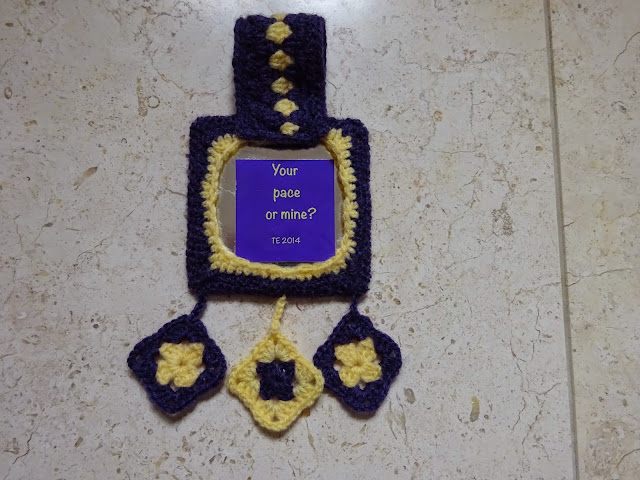 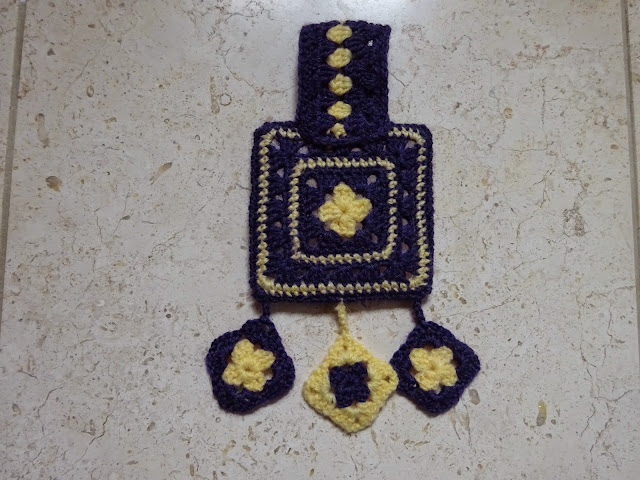 I have no idea how he'll attach it to the hat but I'm sending him some of the purpley blue yarn in case he can tie it to something!

In wildlife news we had a visit from Mrs New Duck and her 7 ducklings, the first we've had this year which is very late. 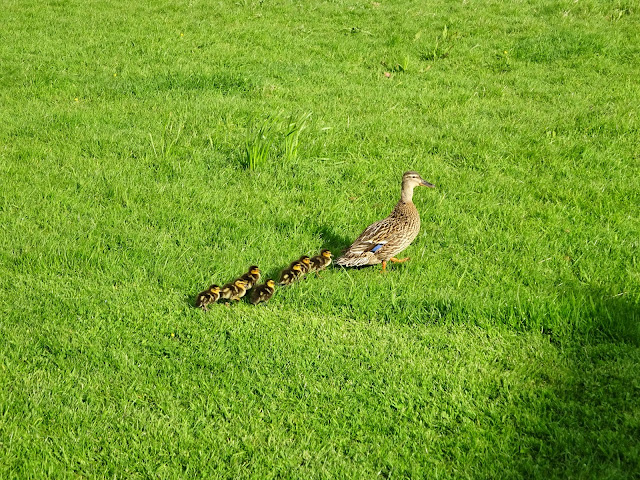 They were really tiny and can't have been hatched very long. The trek from the pond is about 200 metres each way and she brought them to see us twice that day - 800 metres is a long way for such little legs! 7 ducklings marched up to see us and 7 ducklings made it back to the pond. 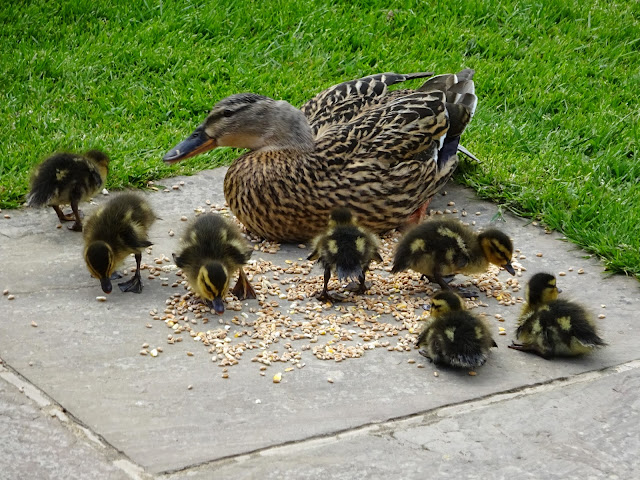 On their second visit Mike took a short video using the camera and I've tried unsuccessfully to load on here (you can hear their little chirpings which are very sweet) but it just won't work no matter how much I've trimmed it down below the maximum file size.

After their second visit I followed them down to the pond again check they got back safely and watched them scooting around in the water. 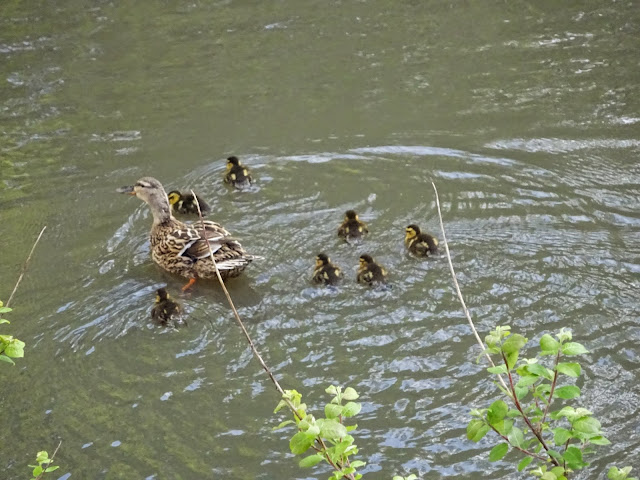 I expected them to come trotting up the next morning but they didn't appear first thing. I wasn't worried as I thought Mrs New Duck might be waiting until the other ducks were out of the way. But then, as I was sitting crocheting with my morning coffee, there was a frantic tapping on the patio doors and there she was but with no ducklings. She was very agitated and I quickly threw her some bread which she gobbled down and then flew, rather than walked, back to the pond.

Oh dear, I thought something bad must have happened so I went to investigate. I couldn't spot her at first but eventually found her hiding in the reeds and the only reason I spotted her was that Mr New Duck was hovering around (which is unusual as they usually disappear when the ducklings are born). I watched for a while and eventually she came out with the 2 remaining ducklings. 5 little lives had been lost overnight. It could have been one of many predators or a combination of several - foxes, Magpies or other carrion, badgers. So sad.

For the last few days Mike and I have been taking some bread down to the pond and feeding them as she obviously doesn't feel it's safe to bring them up until they are a bit bigger. 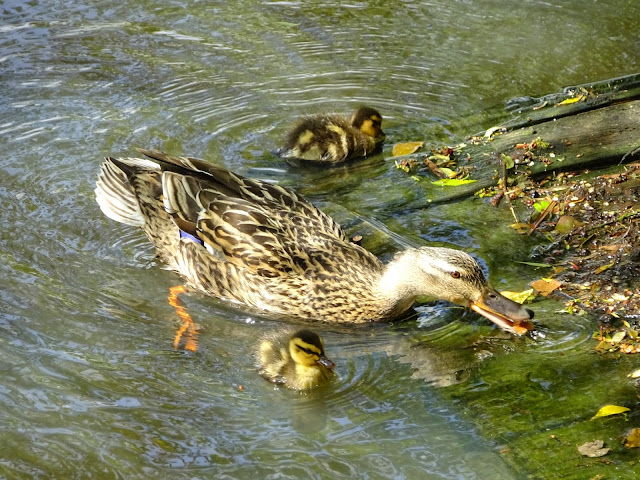