A Small Clanger for a Small Boy

Amidst my mountain of Christmas crochet and knitting came a request I just had to fulfill. Carolyn asked me to knit her a Clanger for her lovely son, Ruaridh - isn't that a beautiful name. It's Gaelic, as Carolyn is Scottish, and translates as 'red-haired king' and is pronounced rueri or roory.

For those of you who haven't heard of the Clangers they were an animated children's TV series from the late 1960's early 70s. They were super-cute and I loved them! The characters have been re-vamped and a new series was aired in June this year and has captivated a new audience of young viewers.

It was easy to get a basic pattern for the Clanger as I still had a paper copy of the original which the BBC issued at the time. We established which character was Ruaridh's favourite ('Small' Clanger) and so I searched around to see what changes had been made and then contacted the production company to confirm - it appeared that his costume had been modified but there were so many variations of it on-line I had to just use an old template and update the colour and embroidery. What shocked me was the number of people who were offering photocopies of the pattern for sale which surely must be an infringement of copyright?

This was such fun to knit even though a tad fiddly and I really enjoyed putting the pieces together and creating the character of Small Clanger. I can see why people get addicted to designing toys!

Here he is in his various stages: 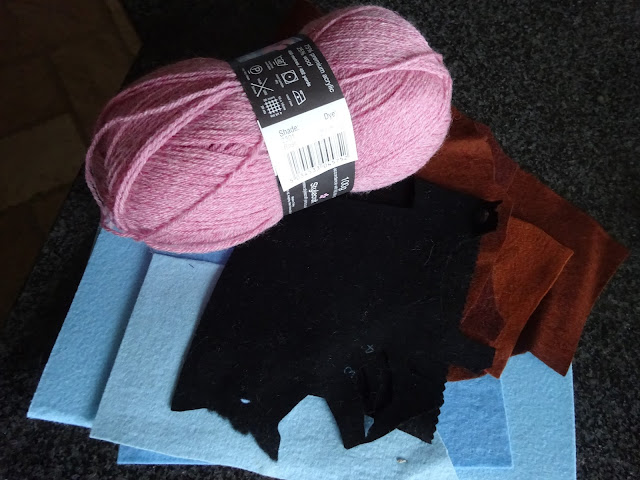 I was relieved when Carolyn told me that he'd arrived safely and delighted when she sent me this lovely photo of Ruaridh holding him. Even better, he told his grandma that Mrs Claus had knitted it for him. A perfect result!


I must just add that Ruaridh has been accompanying Carolyn to their local parkrun and yesterday he completed his 50th run - and he keeps getting faster and faster. Well done Ruaridh.
Posted by Susie Hewer at 2:03 AM

You have made small clanger beautifully! Makes me want to make a toy - which I never have, not a knitted one anyway. Who wouldn't love it? Brilliant, you seem to have got all the details just right and done everything so nicely, no lumpy stuffing or anything. I love it.
Sara

Thanks Sara! I haven't made many knitted toys but they are incredibly absorbing so I urge you to have a go using whichever medium you prefer. Susie x

Hi Susie ... and a Happy New Year
I've just spotted your blog from 'Old Running Fox' blog ... and thought I'd hop over and read.

Alzheimer's is in our family, I lost both my dear Gran and my Dear Mum to this most cruel of diseases.

My husband is a Type 2 diabetic (diagnosed seven years ago) and since that time we have done a lot of reading about diet / lifestyle.

We now both live the LCHF lifestyle ... eating lower reduced carbs, higher healthy fats and moderate protein. Add some regular exercise and a good sleep pattern too! We've found that his blood sugar levels are excellent and I also think it may assist with Alzheimer's / Dementia because this disease is now sometimes referred to as Type 3 Diabetes.

Reading through your blog, you have done so brilliantly in helping raise awareness and funds.

In relation to the Clangers, it was such a popular series and so many are pleased to see it back on our screens ... I just love the clanger you've knitted.

I'm sure I will be back to visit your blog again.
In the meantime may 2016 be a good year for you and yours.

All the best Jan

Thanks for dropping by from Gordon's blog and for your kind words. Sorry to hear that you have experience of dementia. You will understand why I'm driven to help change attitudes about it and fund more research to prevent/control it.

I was interested to read about your experiments with a LCHF diet as a means to control diabetes. I reduced my carbs a lot last year and my running didn't suffer so this year I'm going to continue. For me it's a case of trying to lower my increasingly high cholesterol (familial) level which does not respond to so-called cholesterol lowering foods such as porridge/Benecol etc. I am vegetarian so am careful to get enough protein from non-animal sources too.

I loved The Clangers when I was younger and I too am glad they're back for another generation to enjoy!

I hope that you have a happy and healthy 2016 too and hope you do pop back occasionally.