Right, what is there to share - loads of stuff! I'm not sure where to start so it won't necessarily be in chronological order and I'll have to keep the waffle to a minimum so it will consist of mostly photos or I'll never catch up.

A bit of Nature and wildlife


I write a column for The Herdman Association in our village and in my last article I wrote a piece about moles as we have had soooooo many molehills appearing on our land over the last few months. We only used to get a few odd ones in our field on sandstone but this year they’ve crept into the ones which are on heavy clay. You can actually track their progress from the top of each field as they work their way down. This group made me chuckle as they appear to be following one of the many animals tracks that criss-cross the land: 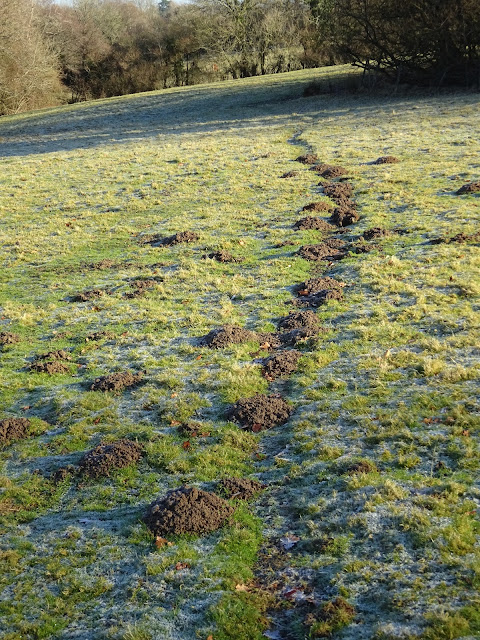 They feed on earthworms - apparently their saliva contains an enzyme which paralyses the worms which they can then store alive in a larder (Yuk!). Another interesting fact I discovered is that in the late 1800’s moleskin clothing was the height of fashion in the UK and there were professional mole catchers known as 'wanters' who were employed to kill and skin the moles (poor little mites). I’ve never seen a live mole as they rarely appear above ground.

There's still plenty of running going on and in the winter months I always try to snap the biggest fungi I spot and this one was magnificent: 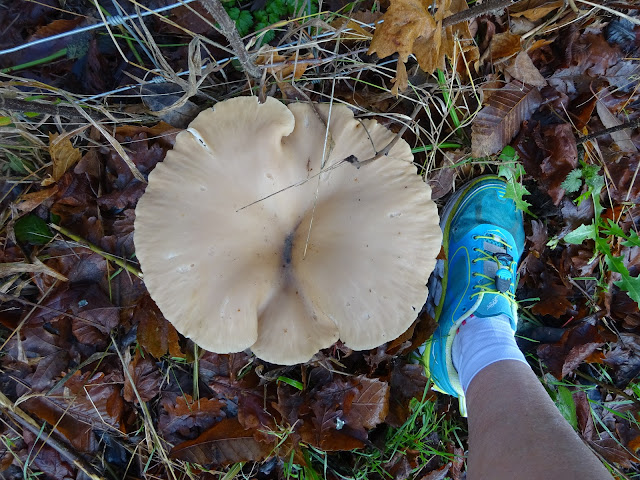 Ptolomey the pheasant arrived during the annual exodus of pheasants when they are no longer fed by the farmers holding shoots on their land. He is quite different from the usual cock pheasants in that his colouring is much richer. He's a gorgeous boy and he's been with us for several months now. 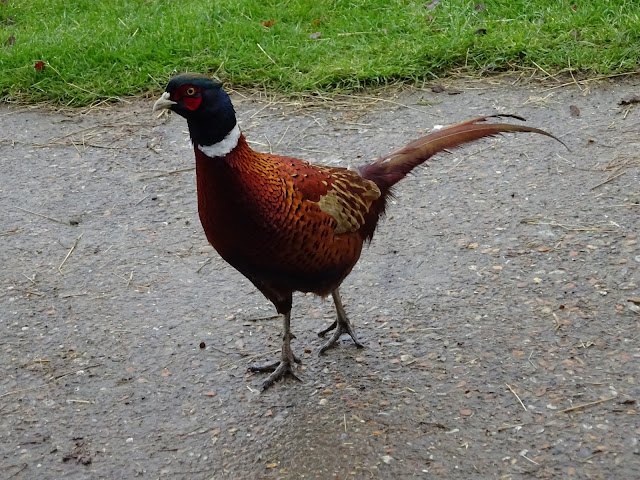 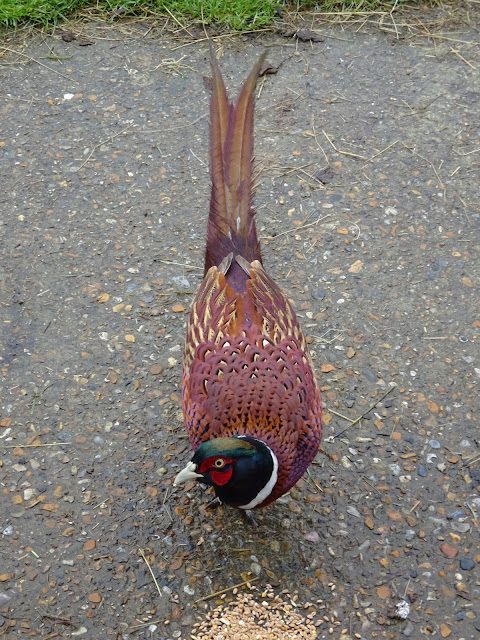 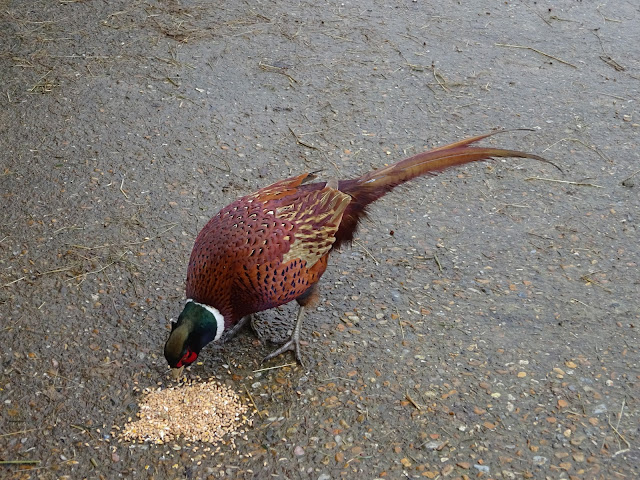 Time for some knitting

Tilly has been my constant companion whenever I was knitting, either on my knee or on the chair next to me. I should add here that I've done so much knitting and gardening recently that my hands are incredibly sore and arthritic so I'm having to restrict myself to doing shorts bursts rather than settling down for an evening of knitting. 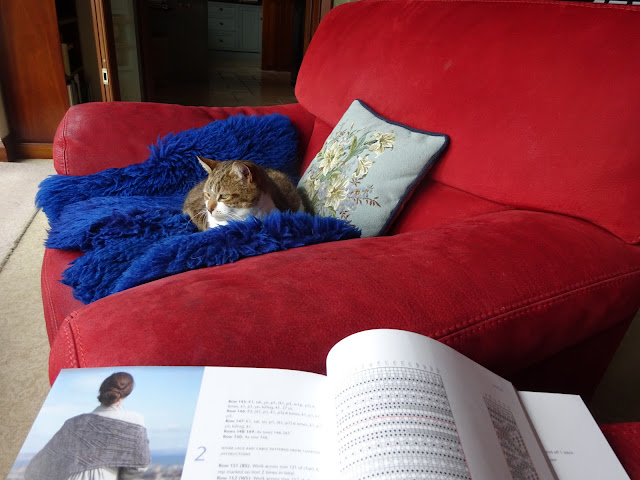 Mike's cowl was a quick and most enjoyable knit. During the few cold snaps we had he kept pinching my Cochal cowl which was part of the 7 skeins club from Kate Davies so I decided he needed one of his own. I used up some lovely Rowan yarn, 'Tapestry', now discontinued which is a shame because it's a lovely yarn to work with. 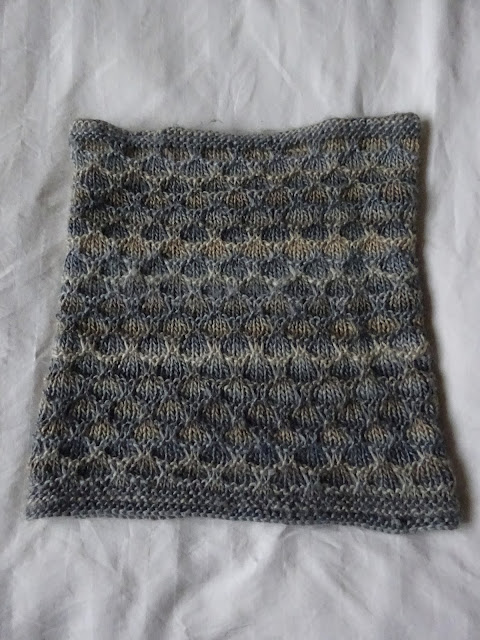 I really enjoyed the last shawl I made from The Book of Haps, 'Houlland' by Donna Smith which has had many outing recently as the colour goes with so many outfits, and I couldn't wait to get started on my next one,  'Uncia' by Lucy Hague as it's such an interesting construction with every row different.

Having avoided cables for many years (I spent a large part of the late 60s and early 70s knitting Arran jumpers and cardigans!) this has really renewed my love of them. Although one wouldn't really imagine this to be the ideal project for taking with me to wait in hospital corridors it turned out to be be perfect and amazingly I didn't make lots of mistakes.

The yarn is one of my favourites, Fyberspates Vivacious 4 ply in 'Verdigris' and the colours are perfect for with my dark green winter jacket (no photos, sorry) and it also looks good over my denim dress which you'll see in a subsequent post. 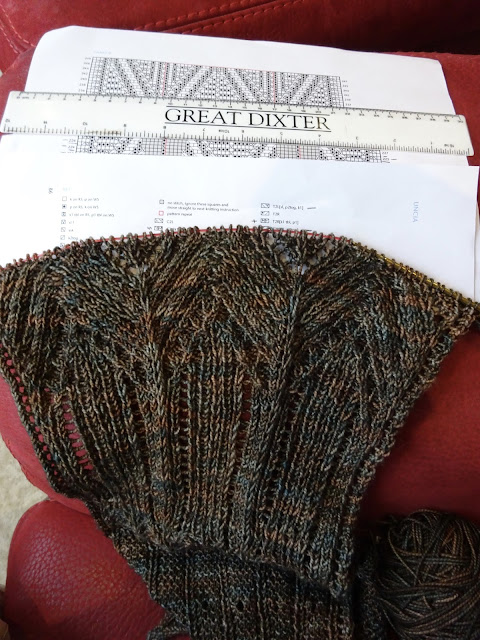 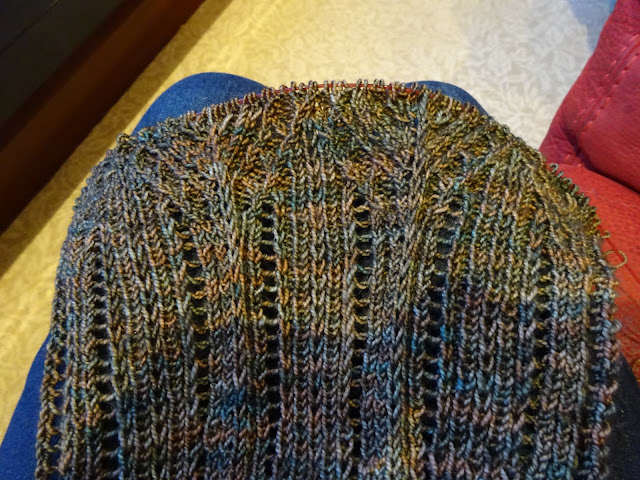 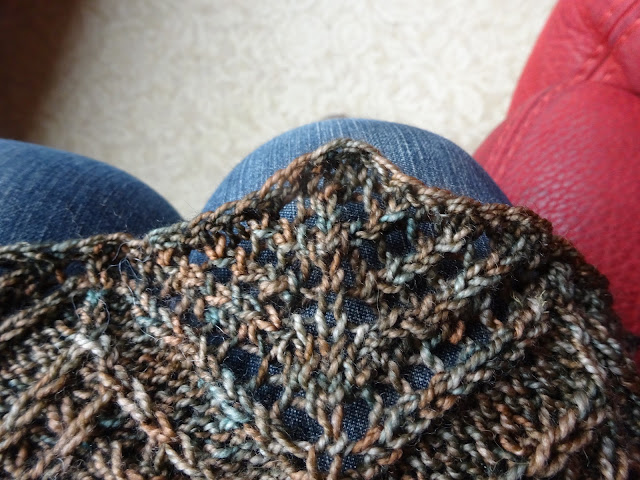 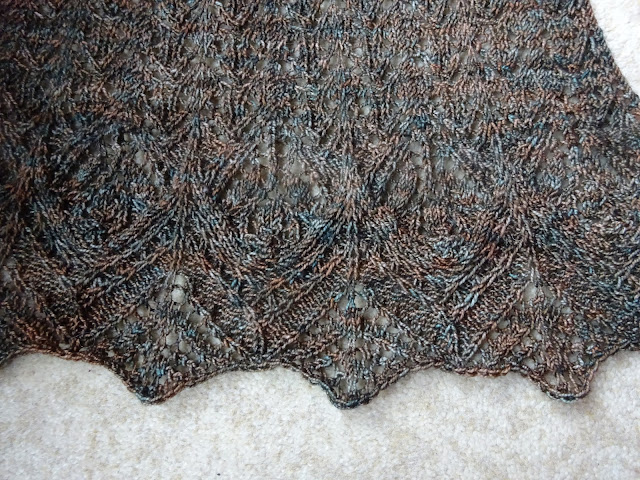 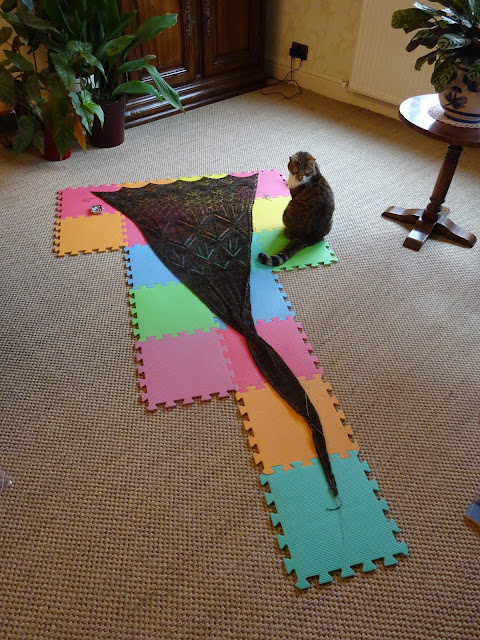 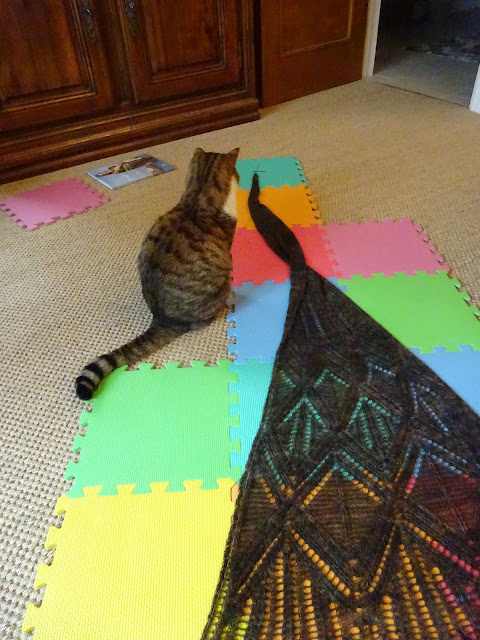 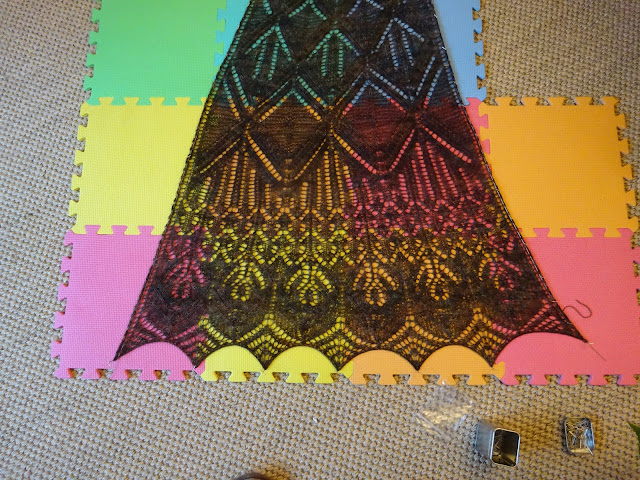 It did take me a while to grasp how to style it well and I found that my preferred way is to drape the largest part over my shoulder and chest equally. It was a most enjoyable knit and is a joy to wear.

There's still more knitting and crochet to show which reminds me I haven't updated my Ravelry page for yonks either.

One afternoon I was pulling out weeds in the front garden when I heard Esther, our Haflinger, calling me. I could hear her galloping around and snorting so went to investigate. She came charging up to the gate and she kept looking back towards the stile at the bottom of the field. I couldn't see anything but she was determined to get me to investigate and so we headed off together.

It was very, very timid and wouldn't come near to begin with but I was concerned because there aren't any bits of land with horses grazing which back onto the woods so I was at a loss to see where she'd come from. I phoned around and asked if anyone knew anything about her but to no avail so I contacted the owner of the woods to let him know he had a little visitor. 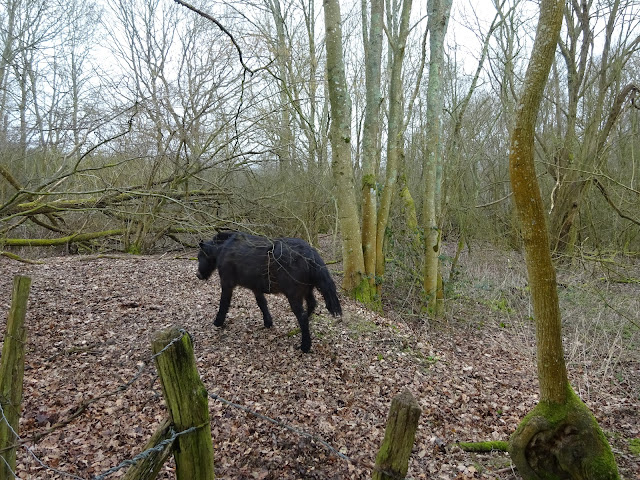 Although she looked in reasonable shape I noticed that her poo was very loose. As this was around the time of the school holidays I wondered if perhaps someone had left her there whilst they went away (yes, I'm afraid people do that) or perhaps she'd just been abandoned. I had to make sure that she hadn't any horrible disease (such as Strangles) before I let our 2 old ladies too near to her and so I restricted their access to the boundary for a while.

She seemed to crave their company and after the initial shenanigans she hung around there all the time. This was equally worrying as there is no grass in the woods and although it adjoins an orchard the only things on offer were windfall apples and they were mostly rotten by that time.

After 2 weeks of her being there I started feeding her as the landowner wasn't interested (!!!) and I couldn't watch her starve. 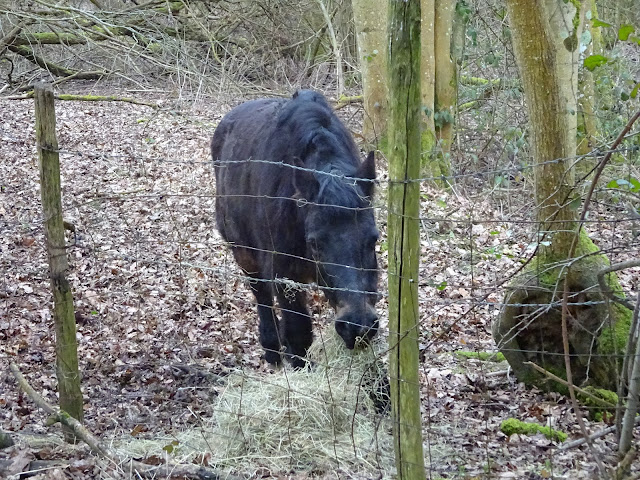 After 4 weeks I phoned the RSPCA and Blue Cross to ask advice and was shocked to find they are so inundated with enquiries that they don't come out unless an animal is being mistreated or is starving.

This resulted in me sticking notes through the letterboxes of everyone in the near vicinity in the hope that someone knew where she'd come from. Although I put my phone number on, no-one replied so I was at a loss what to do so next I contacted the British Horse Society who said the landowner would put up an 'Abandonment Notice' and if she hadn't been claimed within a certain time period then he could claim her as his own. He rather liked this idea as his wife left him a while ago, taking their pony-mad daughter with her (who he hadn't seen for 6 months) and I think he saw it as a way of getting back in touch so he said he'd take over the horse feeding. By that time it was 7 weeks since she'd appeared there.

A week later she disappeared and I haven't seen her since so we have no idea what happened to the poor little mite. Apparently, lots of people are just abandoning their ponies when they can't afford to keep them or have them put to sleep so I'm hoping that whoever has her now was just going through a bad patch and is now able to give her the care she needs. It's still a bit of a mystery though!
Posted by Susie Hewer at 7:34 AM