What a silly title, sorry, it's hard coming up with a snappy and relevant one!

I'll start with the turquoise bit which begins with my gorgeous jumper. I've had this pattern,  'Wisteria' by Kate Gilbert, on my 'to do' list since it was released in 2008 and I finally decided to crack on with it but didn't know what yarn to use. A rummage in my stash uncovered 10 balls of Mirasol Tuhu, discontinued ages ago, which I'd bought at a bargain price when a yarn store was closing down. It's a really soft and squishy yarn and feels wonderful against your skin. 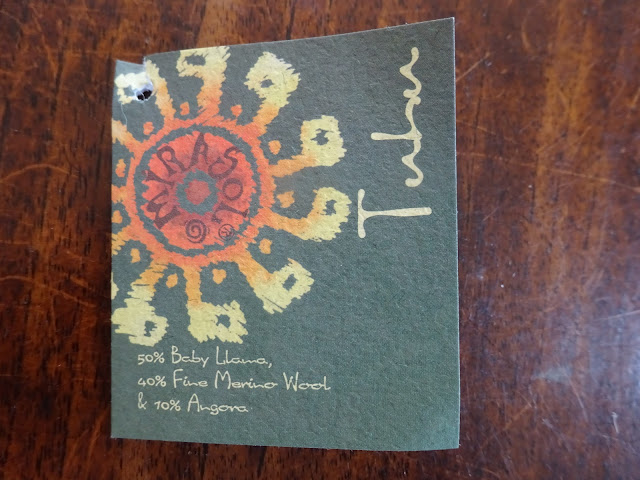 Having looked at other examples others have made I knew I wanted to make it fitted rather than loose as it shows off the cables better. I also wanted to make the sleeves slightly shorter than shown as I prefer to end them at the wrist - I don't like sleeves ending on my hands as I'm far too messy and clumsy! The yarn is slightly thinner than that suggested so it took a while to get gauge and I settled on 3.75mm needles to get the stitch count but this was slightly out on the row gauge so I had to adjust the length accordingly.

The other thing about it was that it's knit top-down in the round and I've never tried a top-down sweater before. That may seem very odd to some people but I've always constructed my knits the way I would create a sewn item, ie with seams for strength and structure. Oh my goodness it's a brilliant way to do it as I could try it on at every stage and so got exactly the right fit and length I wanted at every stage.

It isn't blocked yet but I just had to show it - I'll model it soon so you can see how the colour works with my hair (that was a bonus!).

It all started with a trip to the lovely town of Rye which I've written about on many occasions. As we wandered along the High Street we passed Cordelia James and Mike spotted this dress in the window and suggested I try it on. Yes, really! It's completely out of my comfort zone but for some reason I agreed and I'm so glad I did as it looks lovely on. I tried it with a dark navy denim jacket which also looked amazing and we came away with both items.

I have never, ever, had a denim jacket before but at the grand old age of 59 5/6th I have now acquired one. Get me getting down wiv da yoof (or maybe I look more like mutton dressed as lamb!). 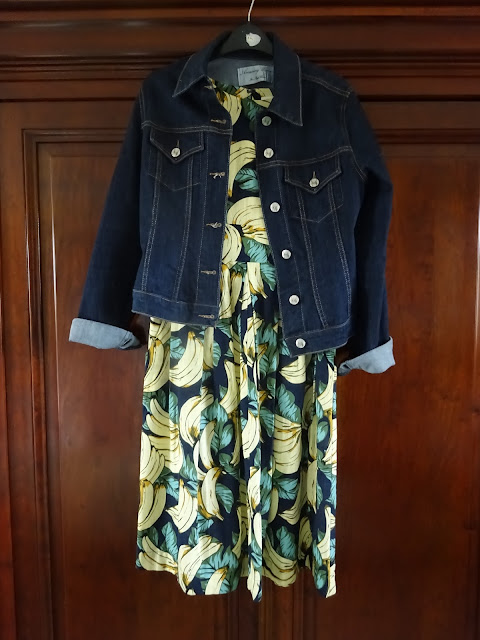 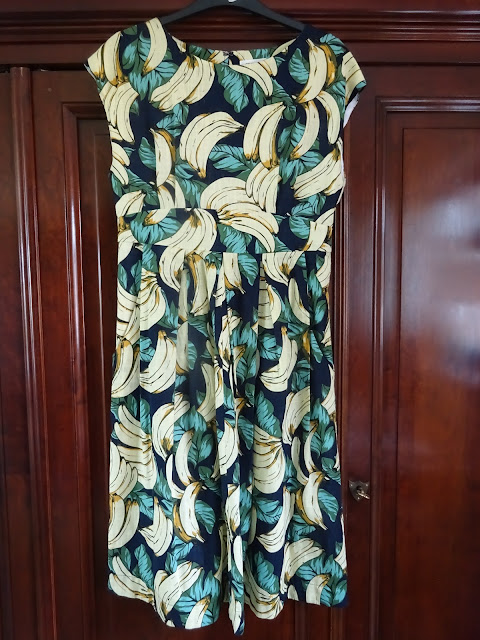 Then of course I had to accessorise it. I already had some navy wedge-heeled sling-backs which work well with the jacket but I decided to pick out the turquoise in the dress as an alternative.

Now I am a rummager and a bargain hunter and am quite happy to buy secondhand from ebay or charity shops and so it was that I found these brand new turquoise suede shoes, unworn and with the labels on, for £5 (price on ticket £60!).  Bargain number one. 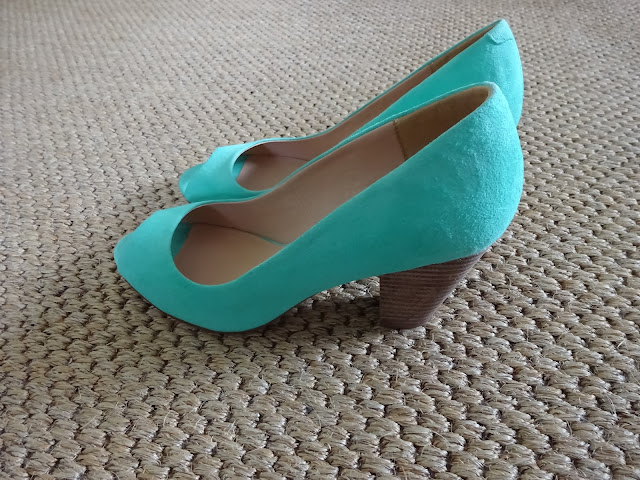 Bargain number 2 also came via ebay in the form of this bag by Anthropologie which is apparently an expensive brand. I don't crave handbags and view them as a utility item but given that it cost £10 and they can sell for 100s of £s I'm very happy with my purchase. 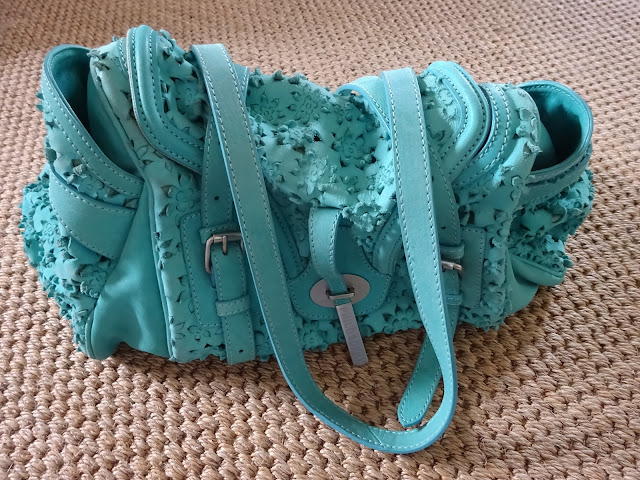 When Mike and I had a trip into Brighton to collect my race number, a couple of days before the marathon, I wore my new outfit and several people commented on my frock and outfit which made it feel extra special - I spend most of my life either wearing running gear or scruffy jeans and looking grubby from dealing with the horses or gardening so it's nice to get dressed up and feel a bit more feminine sometimes.


Rummaging around in the charity shops in Brighton I managed to find 2 bracelets with several shades of turquoise beads for £2 and I reckon I can make a nice new bracelet using them, possibly in macrame, and perhaps a necklace too. 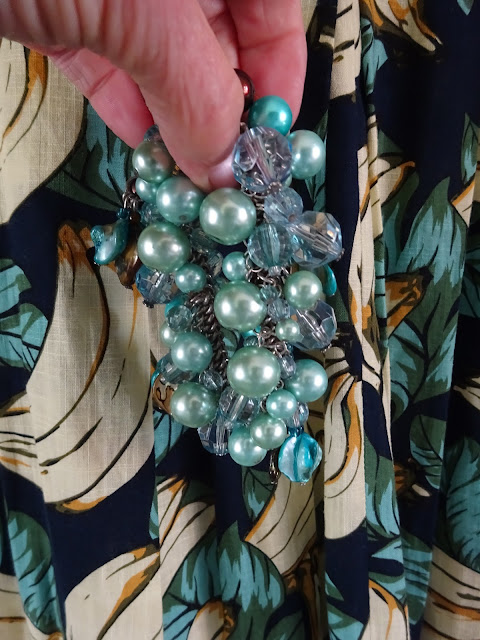 Next I received an email from Jane Crowfoot saying that she has some new lace yarn from West Yorkshire Spinners and this beautiful colour is a perfect match and at 800m per skein is perfect for either a shawl or more likely a bolero such as this self-tie-front cardigan from Araucania which is  a free pattern. 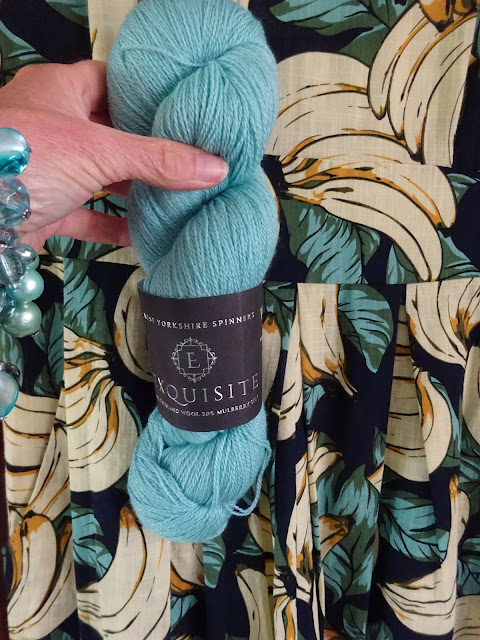 So that's 2 different looks from one dress. A great result all round! Now all I've got to do is make the bolero, bracelet and necklace..........

Every so often I spot a design I really like and will save a photo or magazine clipping to check out later. I don't know why, but I find crochet quite easy to copy whereas I never attempt to copy a knitting pattern.

I saw a skirt like this in a Peruvian Connection catalogue years ago and I really loved it but it was far too expensive for me and so I saved the image thinking I might attempt to copy it at a later date. It had a sort of fishtail at the back but with a straight hem at the front and it was lined with a pale pink sateen.

The body of the skirt was in a cluster stitch which was easy to emulate so I made a paper pattern to match my measurements and then just filled it in, as if doing freeform crochet. The yarn was recycled from this long lacy cardigan (scroll down past the ducklings!) I made yonks ago and is a perle cotton. I had to do lots of weaving-in of ends as the cardigan was mostly motifs but the yarn was still in good condition so it was silly to waste it as I hadn't worn the cardigan for ages. 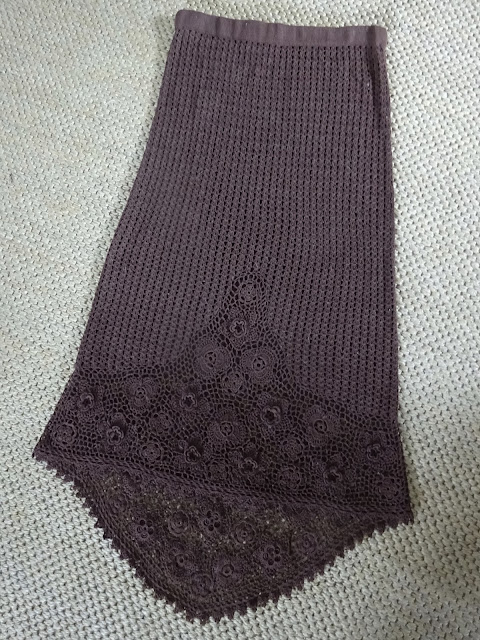 The lacy bits are made up of several different crochet motifs, some with little raised flowers for interest. I made them all separately and then joined them together with chains.

As I'm having a turquoise moment I think I'll make the underskirt out of a bright sateen lining fabric from my fabric stash (which I know is lurking somewhere in the depths!).