I've just been pootling along with things for the last few days. A bit of knitting, a bit of walking, a bit of cross-training and rather a lot of running.

I'll start with the knitting as a friend emailed me to ask how she could check if a jumper she was knitting top-down would fit. She's just started knitting again after a long break and has joined a knitting group to give her confidence but they aren't very beginner-friendly and she was too embarrassed to ask. Please find yourself another group!

In the meantime here are some photos to help guide you:

Whilst we're in the knit zone I'll just show what I started on Saturday night when my marathon brain needed something easy-peasy. It's Carbeth by Kate Davies and as soon as I saw it I knew I'd have to make it as I knitted a sweater in the same shape about 25 years ago and I loved it. My original was a pattern from Vogue International magazine. The sleeves were slightly different but it hung in the same 1960s way and looked fab on when I was nice and slim. I gave it to a charity shop when I put on weight as that sort of boxy style does not look good on a larger frame. I'm hoping it will look OK on my current shape!

This year I am definitely not going to buy any more yarn and am sorting through my stash with the intention of donating some to a Charity Shop or to a group who knit for charity. So I rummaged around and found some lovely aran-weight yarn by Artesano. Sadly the company ceased trading in 2016 which is a great shame as it's a lovely soft alpaca/wool yarn.

I swatched using an aubergine colour then decided I'd knit using the cream as it's more versatile and wearable.

To make sure I'm in the best shape possible for my next my charity challenge, I'm doing lots of strengthening exercises along with Bootcamp nearby and weekly yoga sessions. On Bootcamp day I run the 2 miles there and back and last week there was a mist hanging in the valley so I took some photos on the way there.

My route takes me along a 'holloway' which is a sunken track lower than the land on either side. This particular one was once a bridle path, or so I'm told. 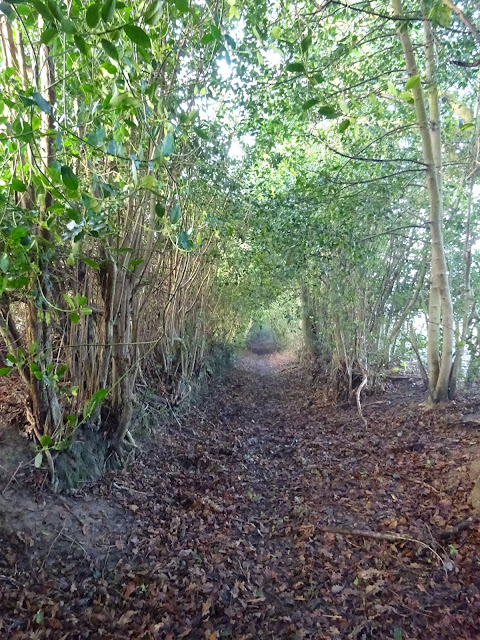 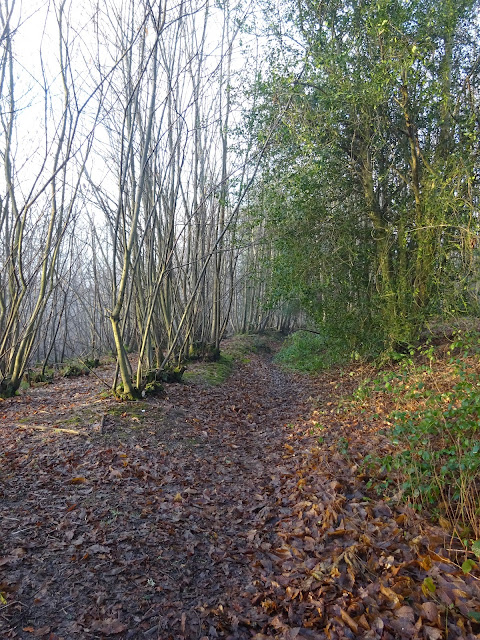 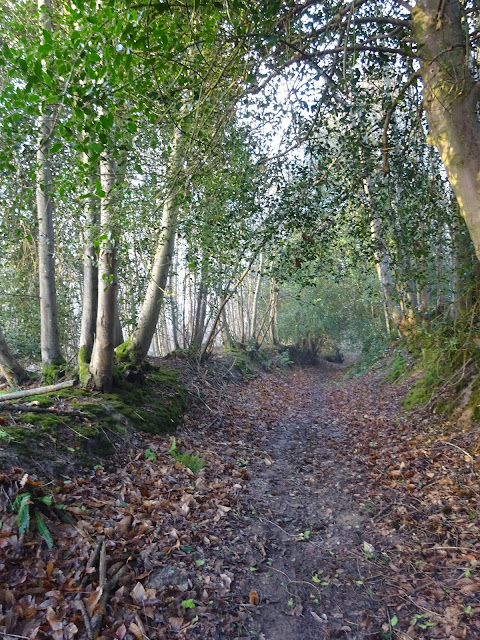 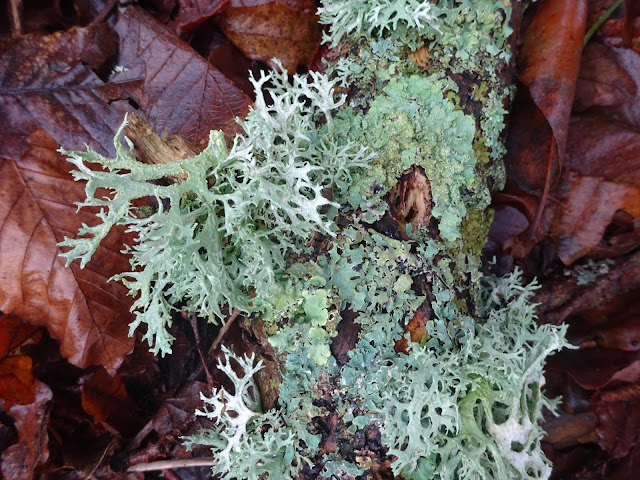 As I passed the sheep I met a man and his dog, a lovely friendly black German Shepherd cross. We exchanged pleasantries and went our separate ways. About .25 mile later the dog appeared beside me and wouldn't go back no matter how much I tried to send him home. I looked back for his owner but there was no sign of him so I assumed he must be just out of sight around the bend. Then I started to wonder if something had happened to his owner and he needed help so I turned to head back and just as I did the man drove along the track in his car. He apologised and said the dog had never done that before. Perhaps I'm turning into a dog-whisperer!

Bootcamp was tough, as you'd expect and I really felt some of the exercises in my legs and bum and did wonder if it was wise to do that sort of workout the day before 2 hard ultra marathons. After a short warm-up we did 'circuits' of various exercises for 1 minute on each mat before moving around to the next mat for some different torture eg squats (ouch), press-ups, walking lunges (ouch), sit-ups, planks, bicep curls, plus several more things which I seem to have blanked from my memory! Then we got a 2 minute break before we repeated the whole process. Then the others did burpees which I can't do 'cos of the arthritis in my wrists so I had to do some jump squats in which you do squats with a weight (ouch and double ouch!). We finished with some gentle stretches and then I trotted off home. No, that's a lie, I walked!

My weekend can be described as eat, sleep, run, repeat! I'd prepared our meals in advance, baked the cakes for the first event which was another Cakeathon and made sure Mike was OK with Esther's evening meal 'cos I knew I wouldn't be back in daylight. Both events were held over at Betteshanger country park, same as on NYD, but this time we were running on the trails which is always a bit tougher especially after rain. However, the weather was kind to us on both days and the trails had dried off completely by Sunday.

As we set off on Saturday my whole body said 'OUCH' but after about 20 minutes of gentle running the niggles disappeared and I settled into a nice comfortable pace. There were several of the 'usual suspects' there but also lots of new people which was nice. It's wonderful to see people achieving things they never thought possible.

I was trying out a different fuelling strategy and had filled my bottles with Tailwind which is used by lots of marathon runners. Did it make a difference? I'm not sure but I'll keep trying it for a few more to see.

I didn't stop at the aid station at all and just had my card punched after each lap and headed straight back out again. It was 8 laps for a marathon o 9+ laps for an ultra marathon. After I'd completed my 9th lap I still had enough time to go out for 1 more complete lap but instead opted for doing half a lap to make it up to 50k, which is 31.1 miles, as I didn't push myself too hard given that I had to do the same again the next day.

On Sunday morning everything hurt and I was not hopeful of a good time. However, once I'd started running and the niggles had eased out a bit I settled into a decent enough pace and was delighted to finish just 9 minutes slower than the day before. I even managed a sprint finish for the last .5 mile as I didn't want that pesky Nick, see below from a different race) to catch up with me. Go leggies!

All in all that was a very satisfactory weekend of running and it's given me some confidence for the task ahead.

I got a trophy for both my cakes - my usual banana loaf and 2nd prize for my vegan banana cake which I've perfected at last.

Next weekend will be the same sort of thing only on a course which is not my favourite as I've fallen over there several times and it's hillier too. I shall be taking my walking poles with me just in case.

Several years ago the charity I support re-branded itself from Alzheimer's Research Trust to Alzheimer's Research UK. This left me with a large quantity of tee shirts in various sizes that I couldn't donate to charity as they had the logo on and I had no idea what to do with them as it didn't seem right for them just to be recycled.

Then I met a fellow runner who collected tee shirts and took them to a Christian charity in Kiyindi, Uganda so I gave them to her. The other day she sent me this lovely photo and I was delighted to see them put to good use. 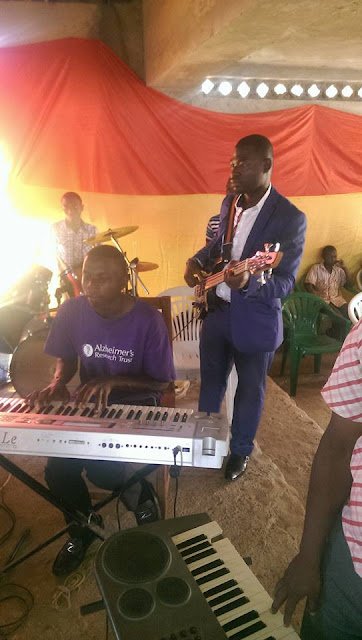 My daughters occasionally do boot camps-i think if I suggested they ran there and back I would receive an injury...
Good job on the running. You make it look so easy. I shall be happy if I get 45 mins on the treadmill today-weather is snowy, very cold and windy!
Julie