I wasn't going to do this, honest guv, but I was in the grip of taper fever and Mike suggested it to calm me down. Well I've done it and it hasn't calmed me down but at least I got a nice shiny medal in the process!

This was another of Traviss and Rachel's fab events over at Betteshanger but this time on the tarmac cycle track rather than trail. When you registered you had to choose to be a Mod or a Rocker and given that I grew up riding on the back of a motorbike it was an easy decision:


Before the start Traviss tossed a coin to decide which way we ran round the track and whether we were inside or outside the lane. We Rockers ran anticlockwise inside the lane whilst the Mods ran clockwise on the outside track. It was nice 'cos you got to wave and chat with people as they went past twice on each lap. From a distance some people thought I was just wearing a bra on top - perhaps a bit cold for that thank you very much.

The weather wasn't very nice though, although at least we didn't have the torrential rain we had on New Year's Day. It was very cold with a biting wind which we ran into for 2/3 of each lap and for the remaining 1/3 it swiped us from the side. Brrrrrrrr!

It was Kirsty's 200th marathon and as she was a Mod I got to wave at her lots which was nice. There was cake too, yum.

A lot of people struggled for some reason but I felt reasonably OK. I paced myself a bit faster for the first half and then slowed right down to my ultra pace interspersed with walk breaks for the second half. One thing I noticed was that my legs felt very heavy and were a bit crampy which I put down to breaking in a new pair of shoes which I don't like as much as the previous model; I do wish they wouldn't tinker around with the design quite as often as they do. 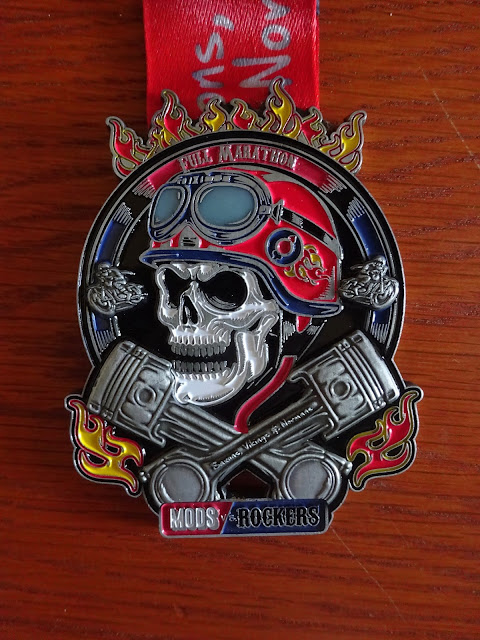 In other news, Kate has released a cardigan version of Carbeth so I spent a happy evening winding some skeins of beautiful purple Artesano alpaca aran into balls and cast on straight away.

This was my progress on Friday evening but I've been otherwise occupied over the weekend so will get back to it tonight:

This morning I finally agreed the Press Release with Alzheimer's Research UK which has been on the back-burner as they are very busy at the moment. It should go out in plenty of time and I'll talk about it as soon as possible.

I've been trying to get photos of this amazing plant which has been delighting us with it's unusual flowers for several weeks. It's Billbergia Nutans, a Bromeliad from South America and it's remarkably resilient and easy to grow. It's common name is the 'Friendship Plant' because it's very easy to divide and share. 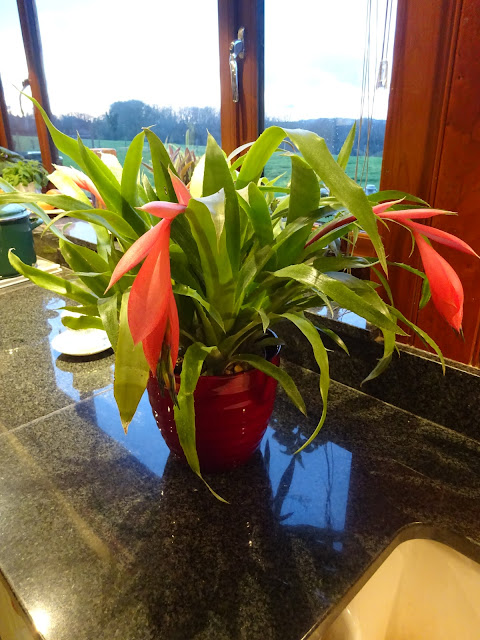 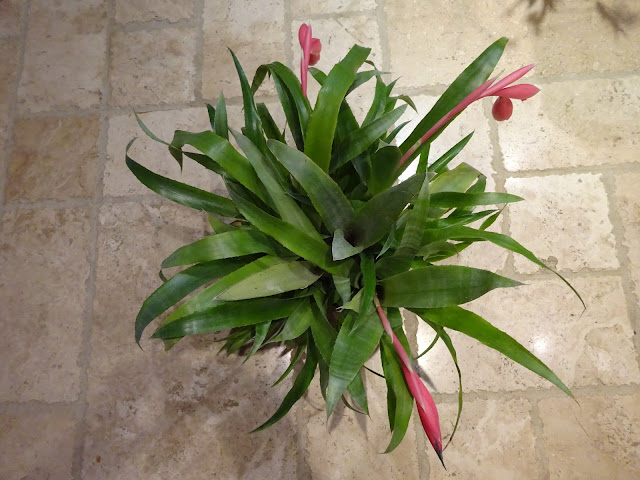 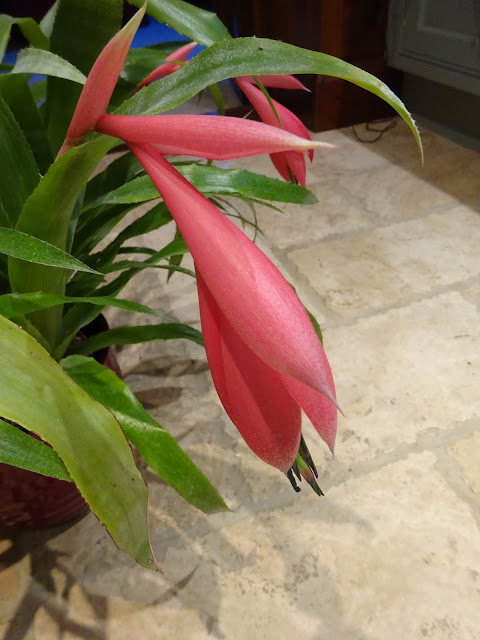 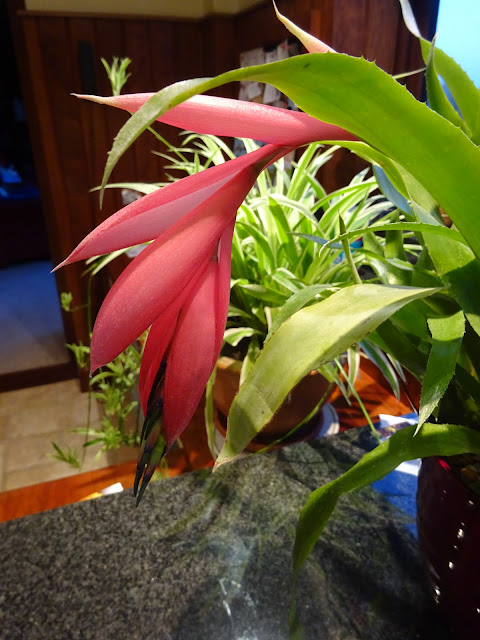 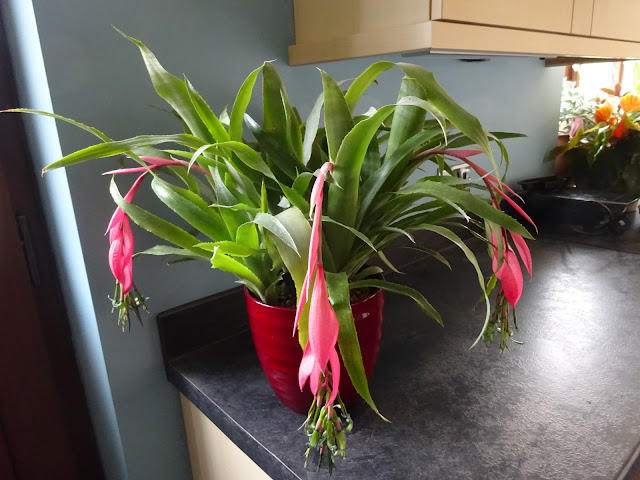 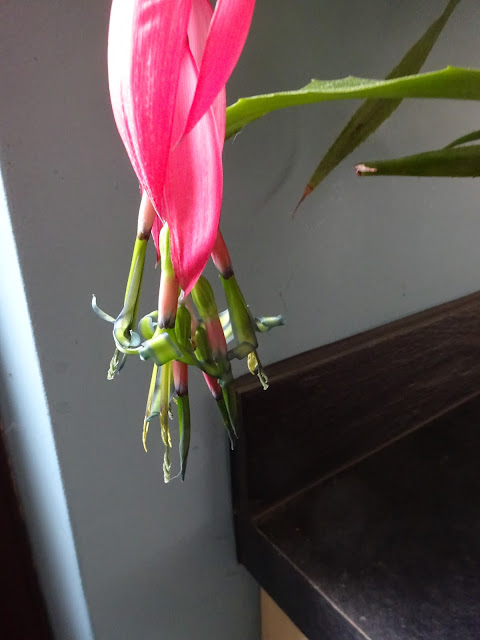 It's brought a welcome splash of colour to the Utility Room.

We have some new sheepy friends to stay which is such a relief because the sight of our empty, horse-less fields was making me really sad. Unfortunately though we had a dog incident the other day when a woman let her dog off the lead in the woods behind our fields. The dog wouldn't come back when called and eventually found its way into the field with the sheep whereupon it terrified them by herding them round and round until they ended up entangled in a patch of brambles.

I was completely oblivious to what was happening as it was in the furthest field and the first I knew was when Melissa, their owner, arrived with the dog in tow wondering if I knew whose dog it was. It had a collar on but no name tag but I was pretty sure I knew who it belongs to so Melissa headed of and en-route saw a woman walking along with a lead and looking distracted so she stopped to see if it belonged to her. It did.

The moral of this story is please don't let your dog off the lead anywhere near livestock if you are not able to control it properly - it's not the fault of the dog (which is just doing what comes naturally), it's yours for not being a responsible owner! 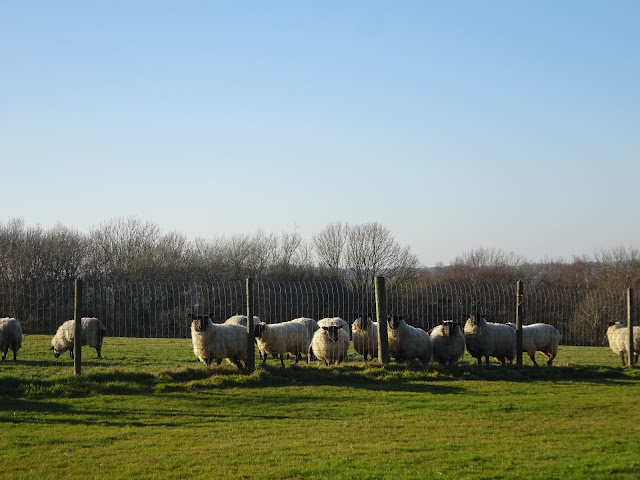