We had an enjoyable day out the Spring Gardening Show at Firle Place recently.  The weather was perfect and we'd pre-booked our tickets so didn't have to queue for long. 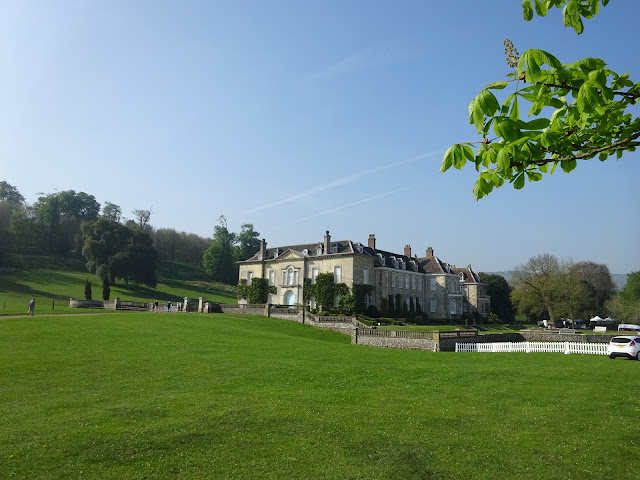 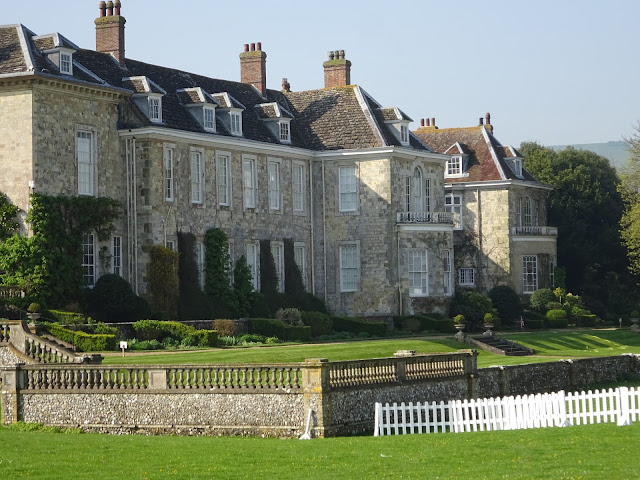 It's a magnificent House in a glorious setting.  We wandered around all the stalls seeing lots of lovely things but not being tempted.  None of the plants were unusual enough to tempt me either and the sculptures and artefacts were either too expensive or not interesting enough.

I came away with some ideas about using some of my old brass pots as planters outside and I was rather tempted by some stained glass work mounted on old wood but the price was prohibitive.  It was just nice to wander around on such a lovely day.

As we started heading towards the exit we did, however, find something special for the garden to be sited at the edge of the orchard; a windmill!  It came flat-packed and Mike assembled it on the patio before we chose a place for it to live. 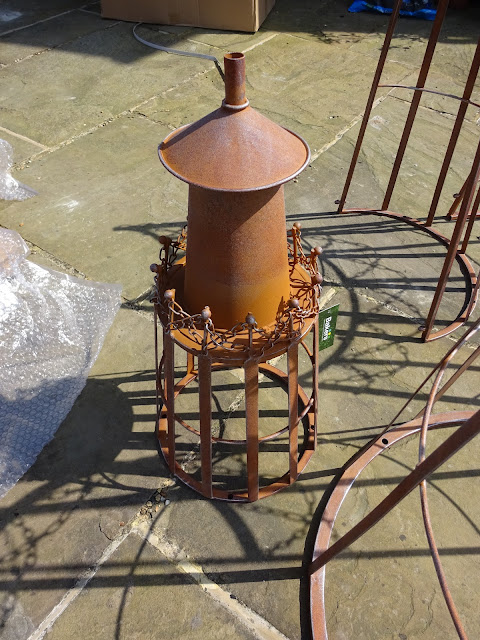 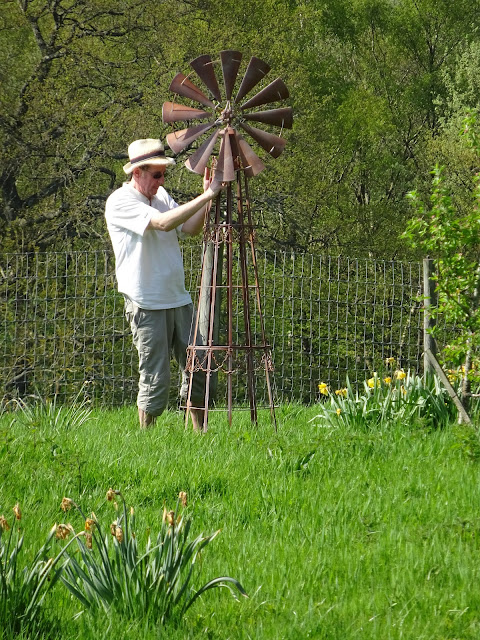 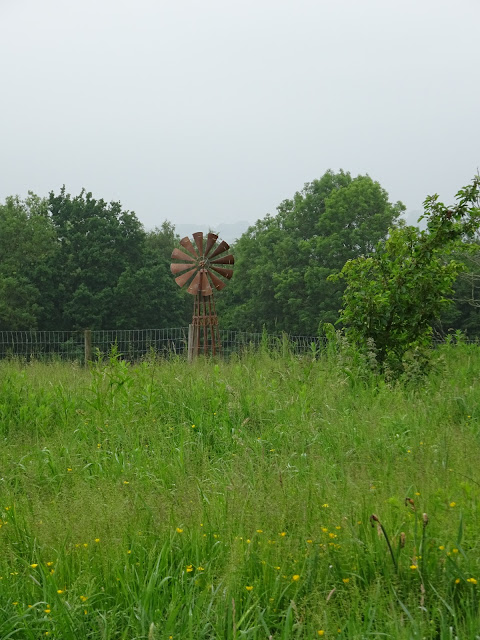 It came with hooked spikes to secure it in the ground but as it's in a a particularly exposed situation which catches the South-Westerly winds we weren't sure how it would stand up in windy conditions.   This was tested within a few days of erection and the answer was "no it did not"!  No worries,  Mike just put 4 heavy concrete blocks over the lowest  level of rungs which you can only just see in the photo below as the grass hides them nicely.  It's been tested many time since then and has been fine. 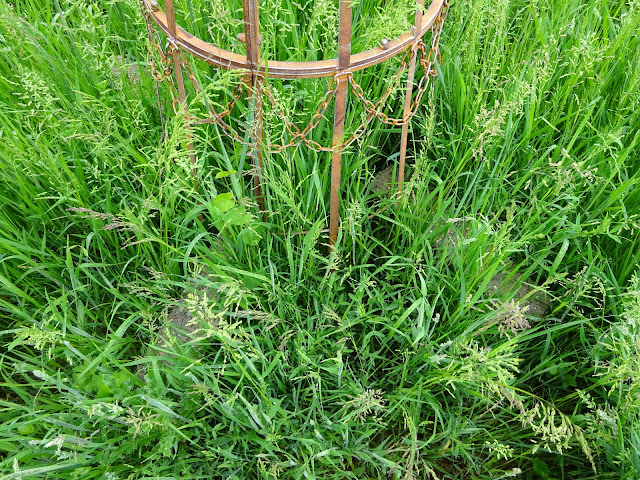 The other thing we modified was the turning mechanism.  As well as the centre windmill paddles turning, the whole thing is designed to rotate in the wind (see the arrow thing at the back) but we found that the screw became loose very quickly and so Mike has made it static.  It's wonderful to sit and watch it turning in the slightest of breezes. 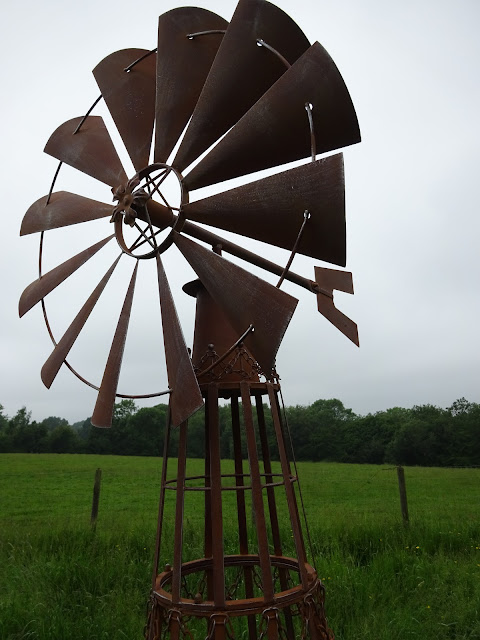 I'm very fond of the use of rusty iron within a garden as it really sits well within an expanse of green.  We did a garden visit a few weeks ago where they had used rusty iron to edge many of their beds and it was very effective, although rather expensive I guess: 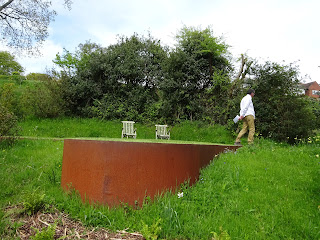 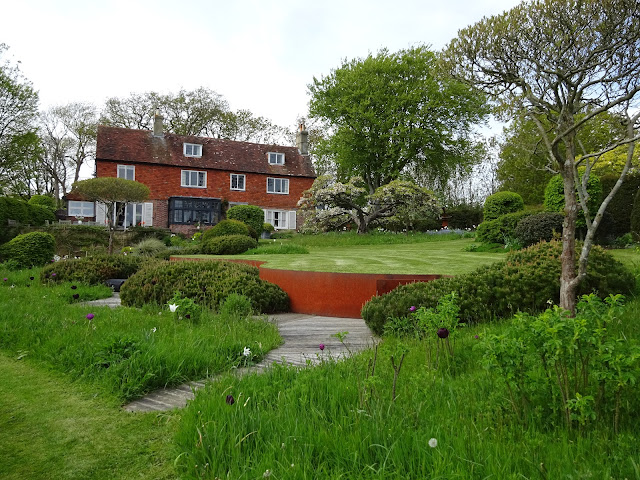 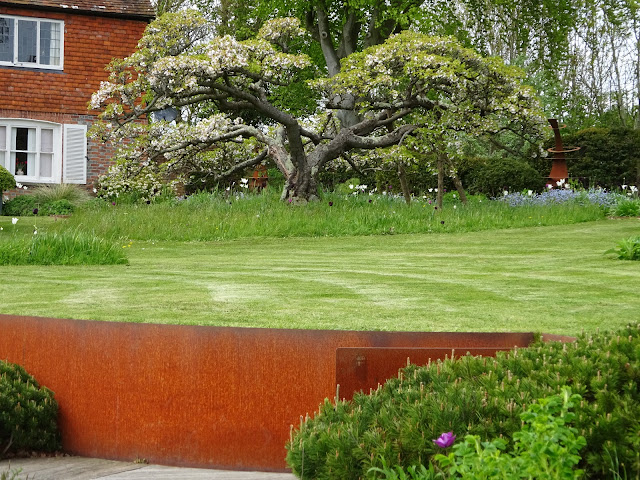 
This was the Weald of Kent Craft Show held not too far away in the grounds of beautiful Penshurst Place.

There were 2 massive tents of crafts and another of foods with lots of stalls around the outside.  We bought some wonderful olive oil, balsamic vinegar and very tasty olives from a local importer plus Mike found some tasty-looking sausage rolls for himself too.  Often when you actually taste these so-called "artisan" things they can disappoint but they let us have samples of everything beforehand and wow they did taste good.

In the craft tents there were lots of rather twee crafty bits and many clothing stalls, some with beautiful and unusual items but many with rather boring offerings.  Outside there were people doing displays of basketry, ironwork, mosaic and other interesting crafty things.

I took a few photos inside the tent of things I admired: 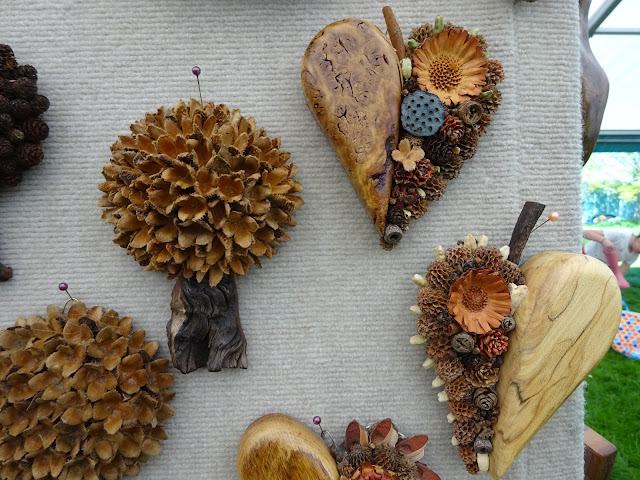 The other thing I snapped was a stall selling lots of Heidi Bears animals!  Afterwards I went to check that she gave permission to sell her designs and she did but I didn't see any mention of a credit to her on the stall which I thought was bad form. 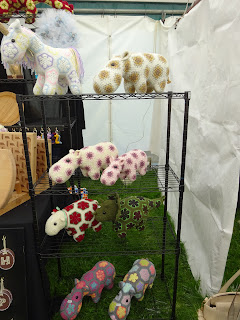 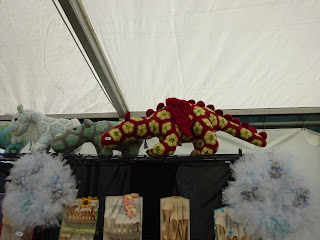 Outside there were lots of displays to look at and these birds of prey had us mesmerised: 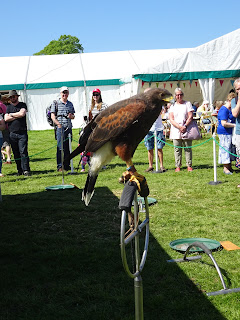 By this stage we'd covered almost all the stalls, had over-priced coffee and cake and only purchased a few food items so we headed towards the exit and stood listening to The Haywood Sisters, a wonderful close-harmony group.

As we listened they started to sing "In the Mood" and an elderly lady standing nearby told us that she had danced to the very same song, with a live band, when she was in the WAAF during World War 2.  She was 92 years young and it made our day to have chatted with her. 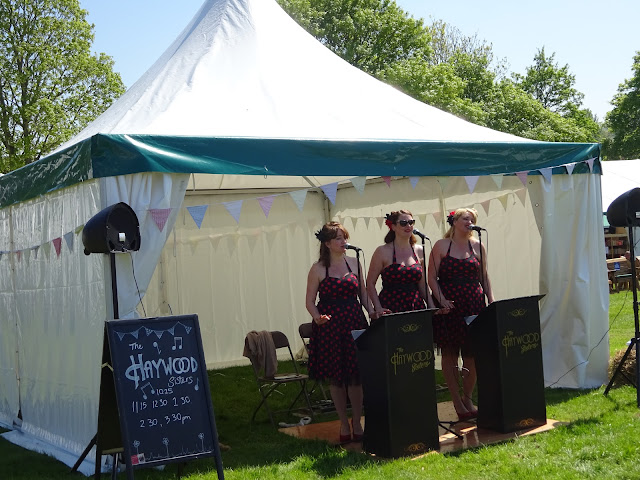 Last year there was an incident involving the ride-on mower, a husband with a temporary lapse of concentration and a birdbath.  This resulted in a large crashing sound followed by several loud expletives which caused me to dash outside to see if everything was OK.

Oh dear:  Husband and mower OK, birdbath not quite so OK! 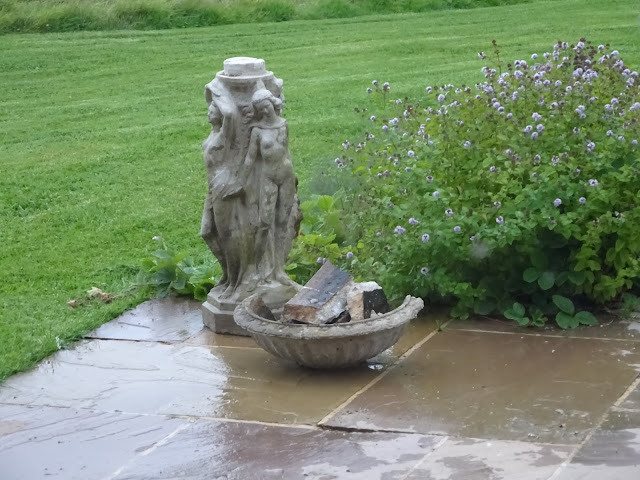 This birdbath had been with us for nearly 30 years.  We bought it for our first flat and I was anxious to repair it if possible so all the bits went into the garage waiting to be glued together again

A Starling family was still with us and had been enjoying a bath the day before so I was anxious to get some sort of temporary bath in place. 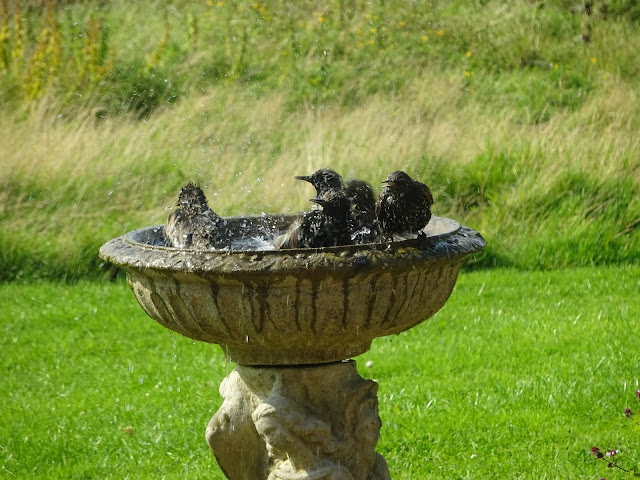 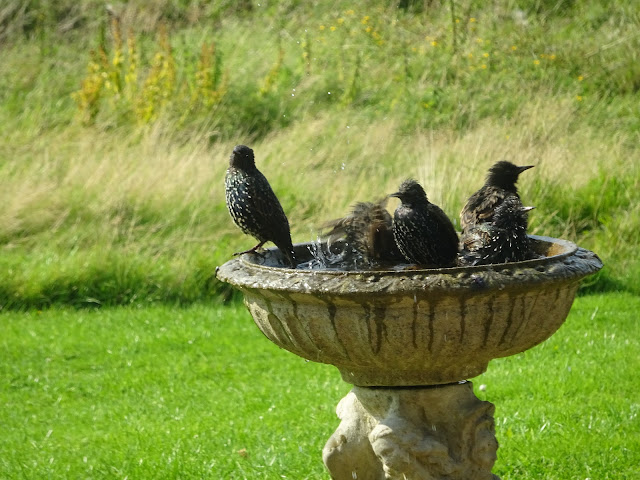 There was one large chunk and several bits so I placed the biggest bit back on and stuck a horse feed bucket inside it, weighted down with a brick.  How very stylish! 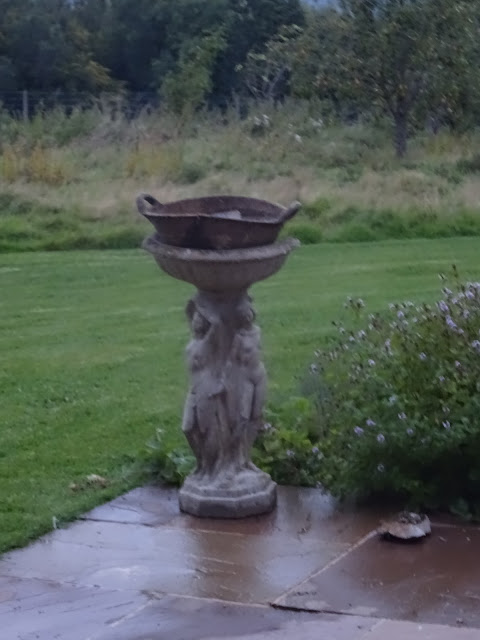 That served as a good temporary bathing and drinking facility until the winter came when I had to resort to a large plastic saucer, first on top and then on the ground, whilst we searched for a suitable replacement. 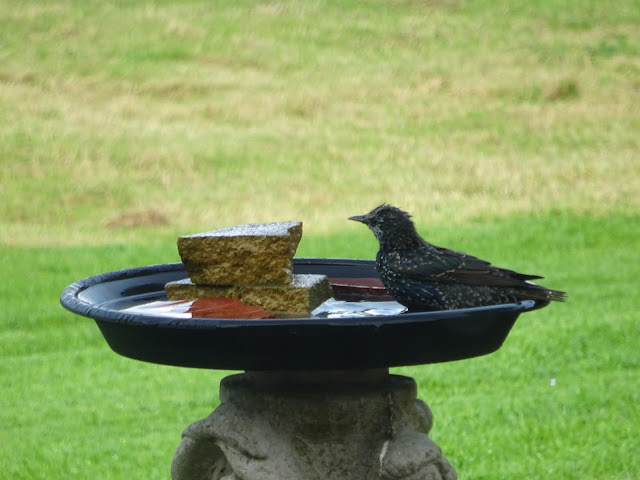 Oh my goodness, the price of something similar!  Nearly £200.  I searched and searched but the things I found were either far too expensive, too ornate/twee or rough and rather cheap looking.

Finally we found the perfect one:

But what about the smaller birds?  I was doing the washing-up when I saw a Robin perched on the edge of it.  He looked into the water, hopped around, looked into the kitchen and then hopped down to the ducks' saucer to have a drink and a bath. 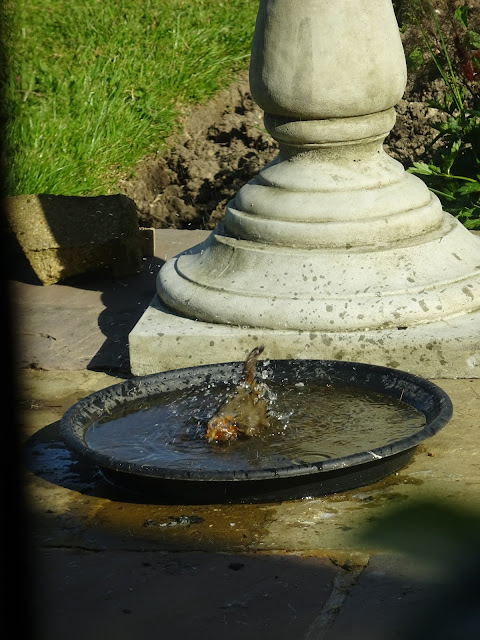 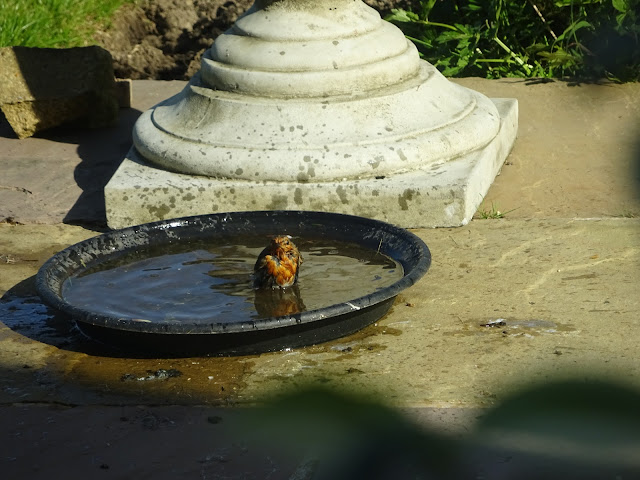 That's when I realised why he didn't go into the main birdbath - it was too deep in the centre and there wasn't a central raised island like the previous one.  Hmmm, how to make it better for the small birds?  I pondered as I carried on with the washing-up.

As I looked out of the window again I saw the solution - I'd left a small stone planter on the table as I'd had cacti in it and it was drying in the sun before it was stored.  It looked the perfect size and colour and would be perfect for the smaller birds to avoid the deepest bit in the centre. 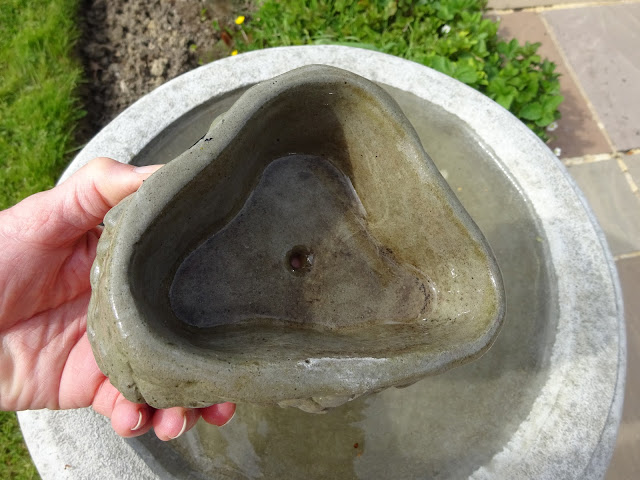 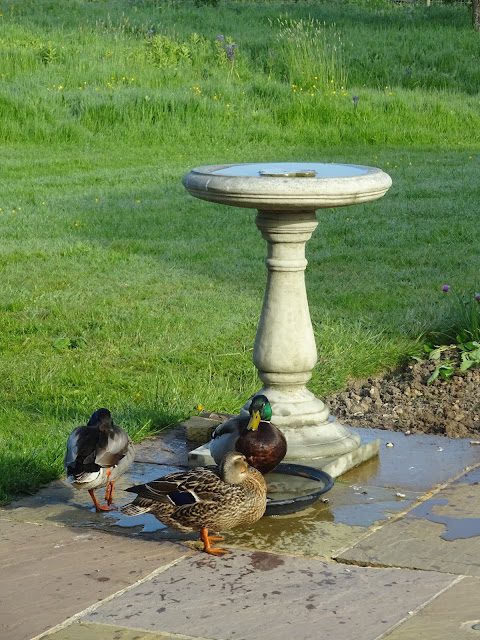 But did it pass the Starling test?  Yes it did!  Blackbirds and Woodpigeons too. 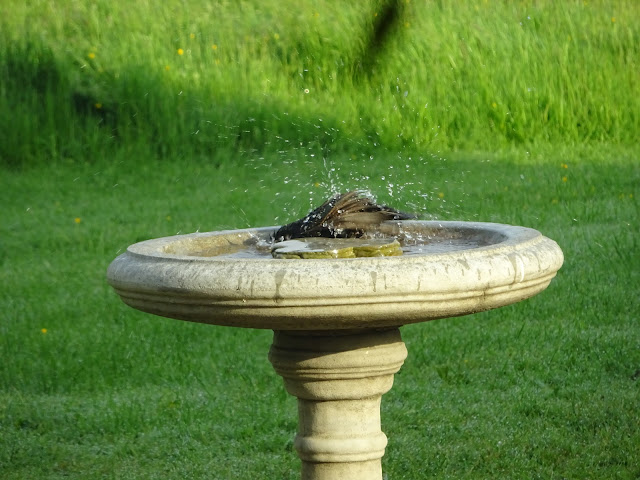 When I get time I'm going to glue the old bath together and use it as a planter in one of the flowerbeds.
Posted by Susie Hewer at 3:18 AM