My goodness we've had some very changeable weather the last couple of weeks. The winds have been so very strong and as one storm moves away another has followed swiftly. With 80+mph one day last week our windmill decided enough was enough and lay down in the grass where we've left it as the strong winds still keep coming apace!

We watched as the fence by the yard moved ever lower and it's now settled at a jaunty angle but it's too windy to go and sort it out at the moment. Fingers crossed it doesn't go right over! 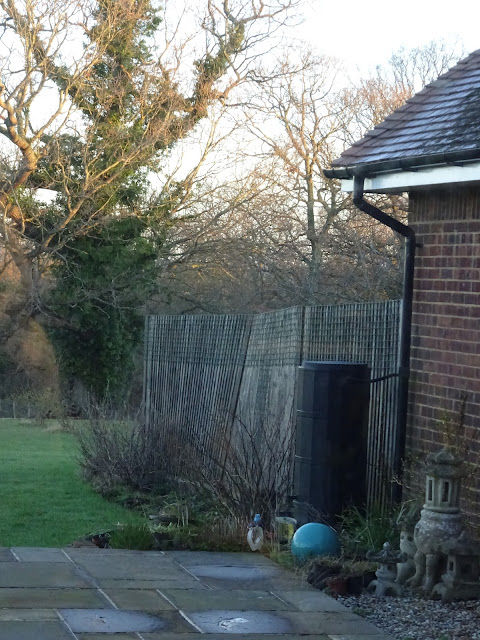 We watched the birds trying to fly in one direction and then get blown a different way. I saw a Wood Pigeon fly out of the oak tree only to be blown straight back into it. The sensible birds, like this female pheasant,  rode out the storm in the safety of the hedges. 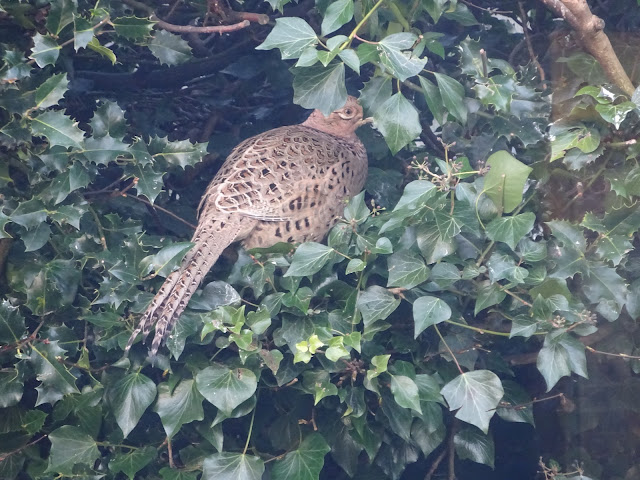 The adverse weather has meant that the 101 jobs I need to do in the garden haven't been finished and the new growth of the herbaceous perennials is showing through. I did manage to start digging out the herb garden, as it need replanting, but that's still not finished. I'm hoping that the weather improves soon so I can get on with things.

I'm in the last 4 weeks of the Six Pack Revolution and I realise now that I couldn't have done all my planned running events alongside the regime anyway. Doing all the exercises in the plan has taken my mind off not being able to run so a lot of good has come out of being injured. Sometimes things happen for a reason don't they.

I've also noticed some changes in my body shape and my clothes feel more comfortable plus I've got muscles in places I didn't have them before! We have to send in a photo of ourselves each week and I can see a huge difference from week 1 to now. I won't share them yet but I will show you my comedy belly button which has gone from this shape ( to the shape of the Mercedes logo:

I started running short distances again a few weeks ago and today I did a hilly 10 miler and whilst I can feel the pain in my foot slightly it has improved dramatically from when it started back in December. Now it's a fine balance of getting myself to the start line in the Brighton marathon in 4 weeks without too much pain and then London 2 weeks later. I should add that I really, really, wanted to do the Sevenoaks 30 today with all my chums but Mary Massage Lady forbade it - being sensible is jolly hard!

In other news our darling Tilly cat has had a major operation to remove what the vet thinks is a malignant lump in her intestines. The vet said she wouldn't normally operate on a cat her age (she's only 12) but because she's a feisty little lady she decided to go ahead. We're waiting for the test results but I suspect the prognosis isn't good for her. Poor little darling.

She refused to go in her usual basket when we arrived home and so I remembered the Hello Kitty one that Mike chose for her (which she refused to use much to his dismay!) and thought that might be worth a try: 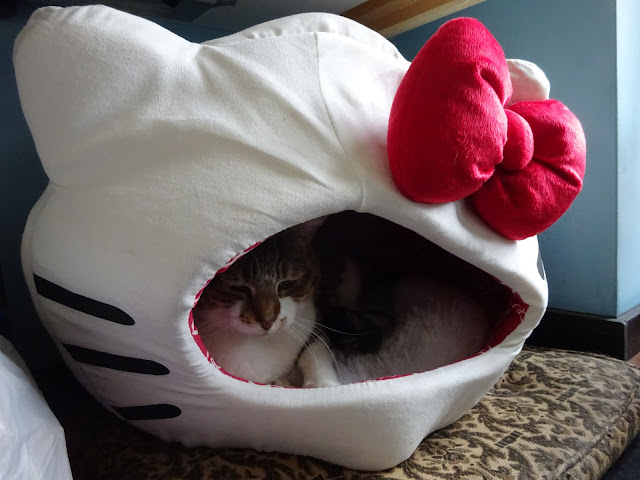 She's been with us 5 very short years and I'm praying that she can stay with us a while longer as she deserves to have a long and happy life as the first 7 years before she chose us were horrible for her. Please send her all your positve thoughts and prayers as I think she might need them.