Catching up again - the Wildlife edit!

I knew last time I posted that there were still things to write about so I'll start with this little chap who appeared in broad daylight and made a beeline for some bread I'd thrown out for the birds: 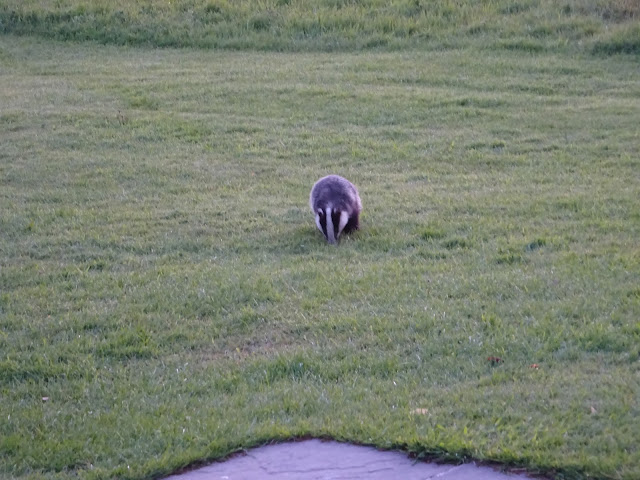 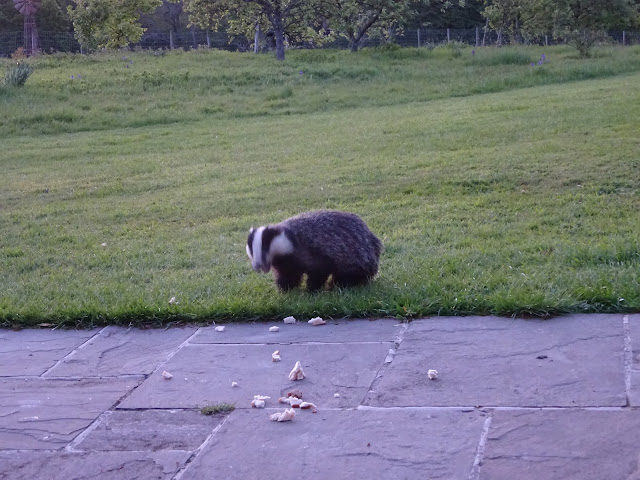 I was worried about him straight away as he shouldn't have been out in daylight and to come so close to the house is unusual. The next day he appeared around midday and came and looked through the window: 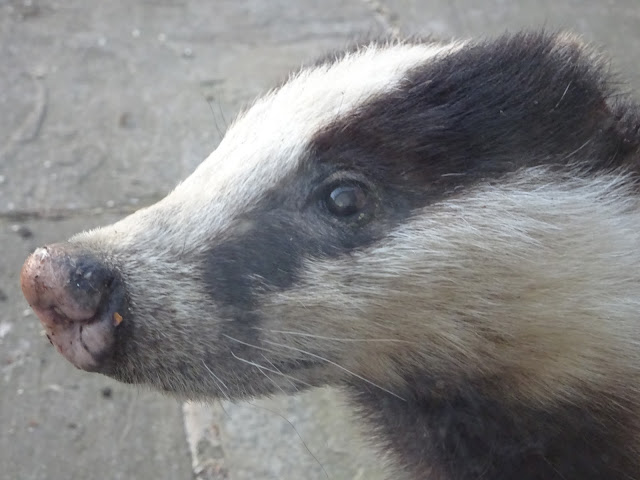 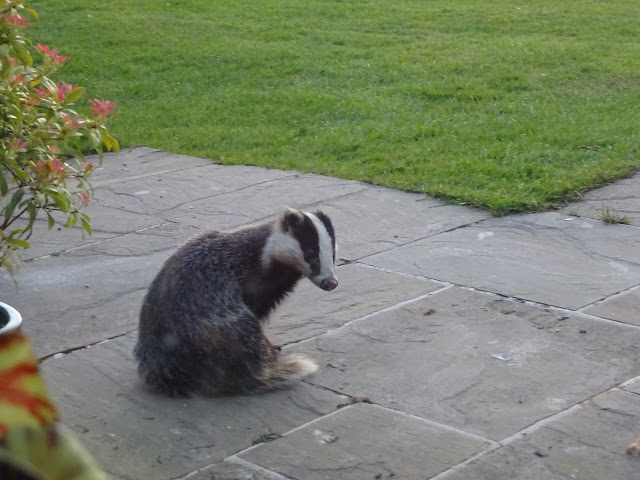 I noticed that he looked a bit mangy and he sat down a lot. When he walked his gait was awkward and it looked as if he might have been hit by a car, poor little mite. 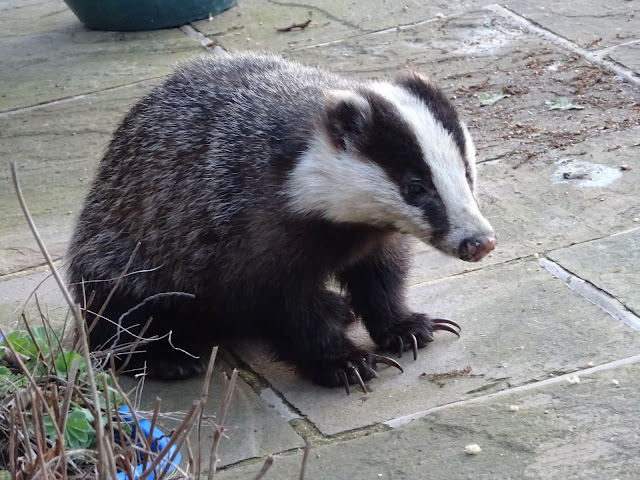 Over the next couple of days his walking seemed to get worse and he kept sitting down a lot so I telephoned Sussex Wildlife Rescue for advice. The man I spoke to said that he probably needed to be captured and examined by a vet so he said he'd get the local badger group to contact me with a view to supplying a cage to catch him. This was on a Saturday.

On Sunday I thought it would be a good idea to get him used to going into or under something to get his food so I started feeding him on the edge of the patio and came up with a rather Heath Robinson idea: 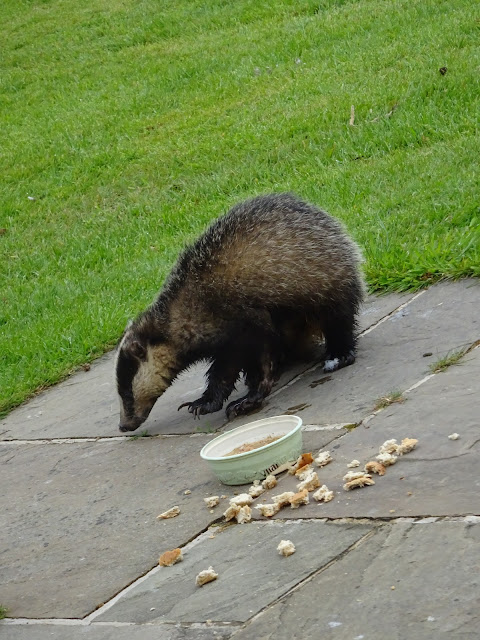 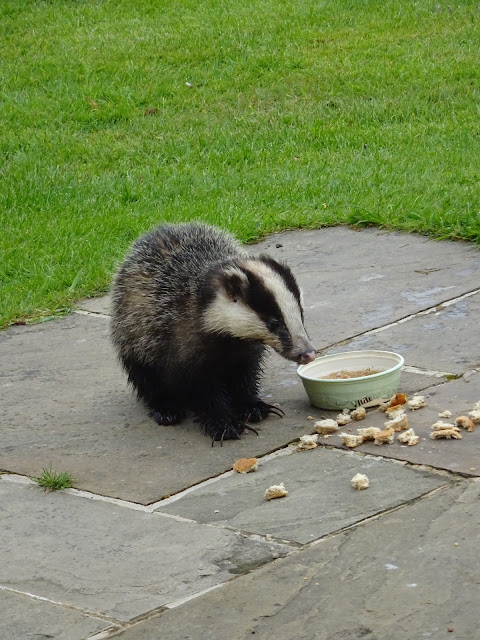 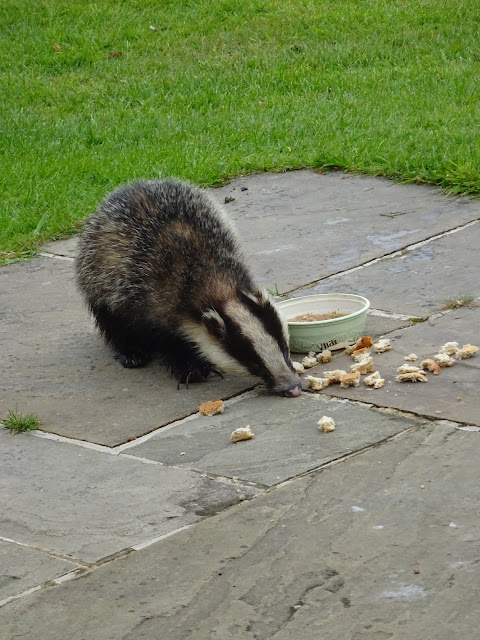 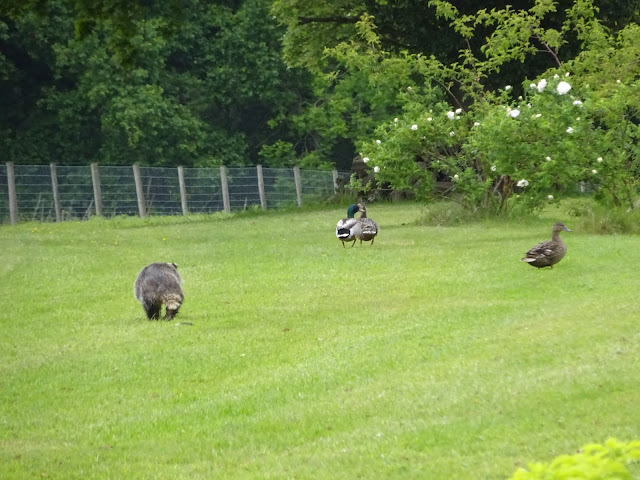 The next day he found this upon his arrival:


When we saw him coming I nipped out and left a trail of food to the cage then waited with bated breath to see if he'd venture inside: 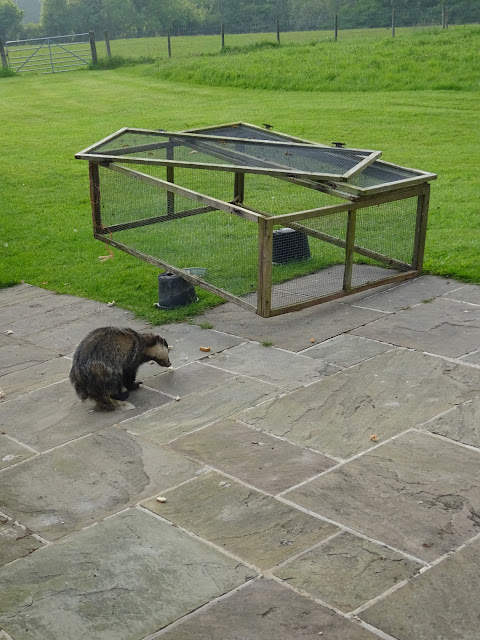 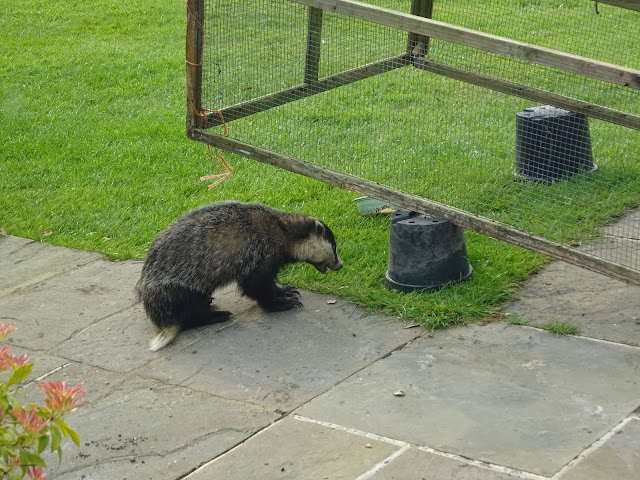 He must have been able to smell the cat food as it didn't take long before he went inside to claim his reward: 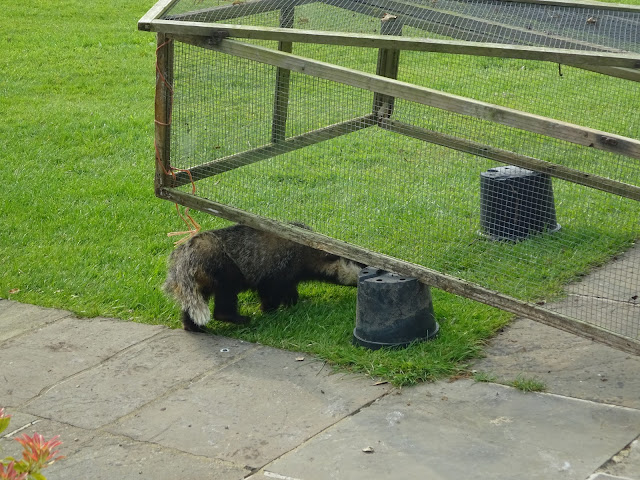 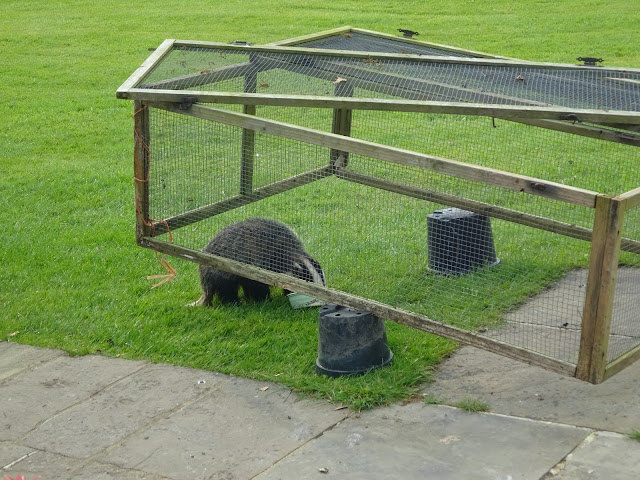 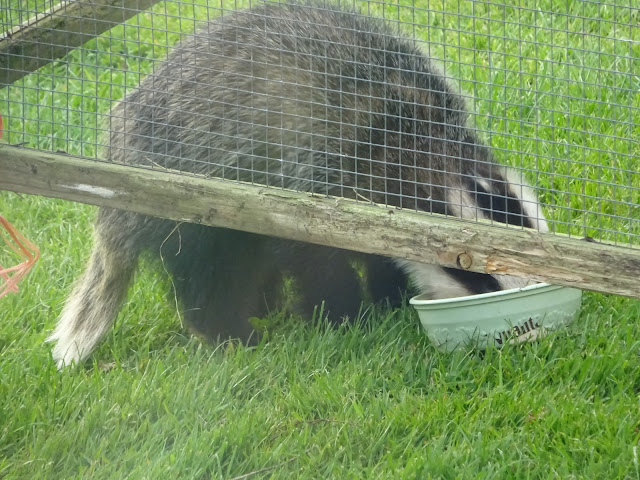 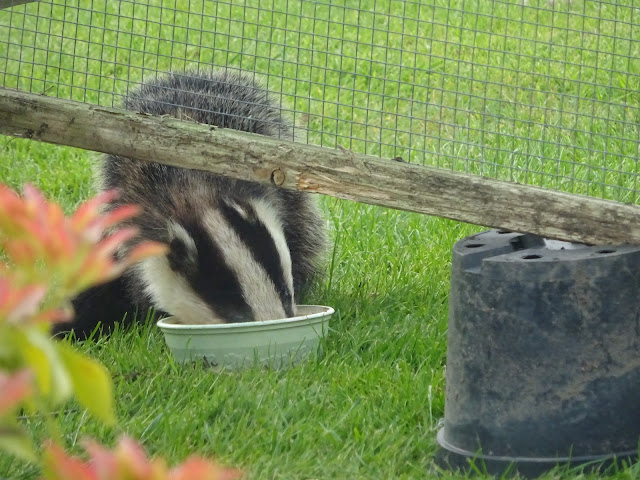 I thought we'd hear from the badger group on Monday but no-one called so I phoned up again. The little badger came round that afternoon but we never saw him again after that so I suspect he didn't make it. I wish we could have helped him more but sadly it wasn't meant to be.

There's so much activity out there at the moment. The birds are busy nesting with the Sparrows on their 3rd brood! The bird bath on the ground is always a good place for hunting out some lining for a nest: 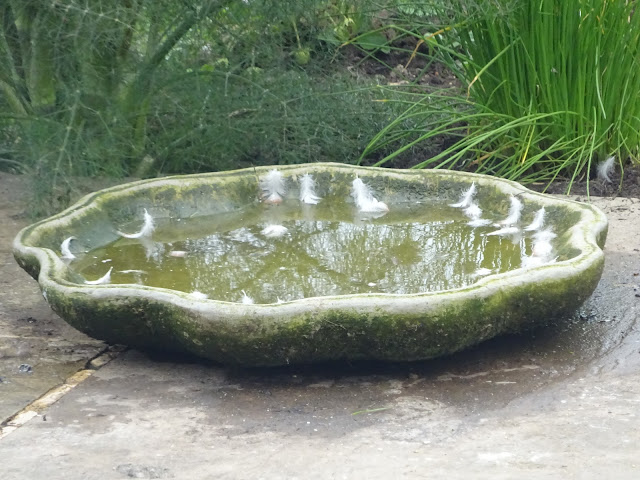 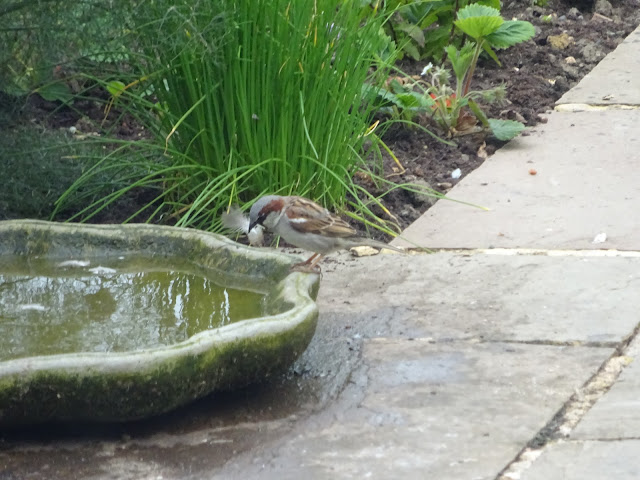 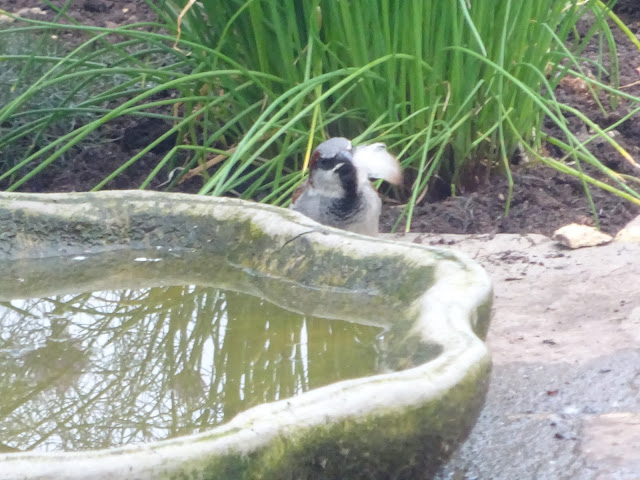 As for other fledglings, well there are just so many of them! Great Tits, Blue Tits, Rooks, Woodpeckers &  Goldfinches are all in abundance which is brilliant. Watching them is compulsory viewing and much better than TV: 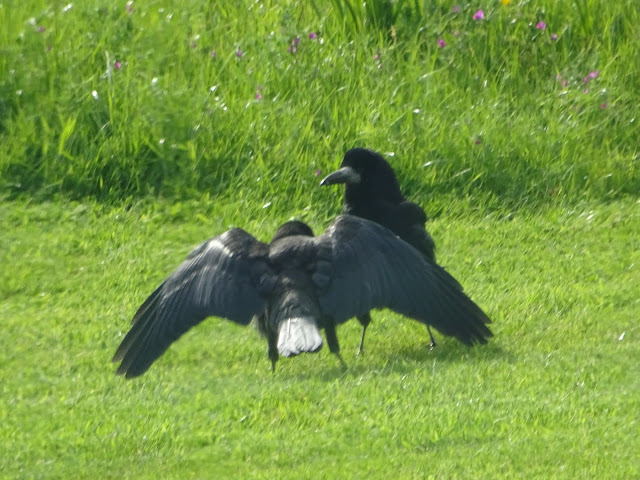 They Rooks and Jackdaws had been emptying the nut and seed feeders within minutes of me topping them up so drastic action was required: 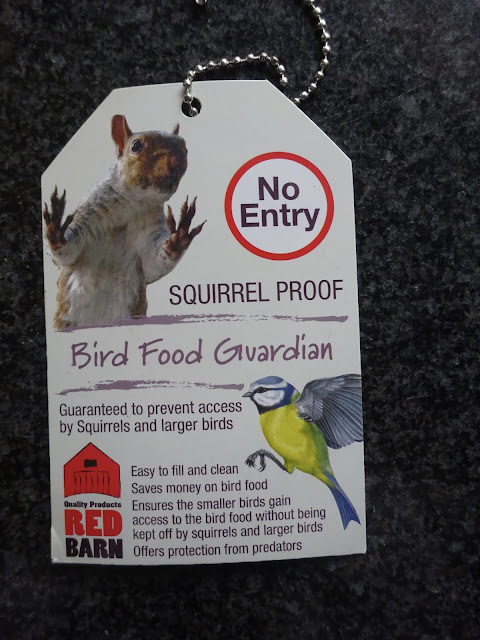 When we first put them out there was  a great deal of consternation amongst the Rooks, Jackdaws and squirrel who tried and tried to get at them! The Jackdaws worked out they could just reach inside through the holes but it was difficult. The squirrels tried and tried but couldn't get anything and the Rooks decided their beaks were just too big to get anything.

The first bird to enter the cage was a Nuthatch who seemed to get the hang of it straight away along with all the Tits. However, it took about 6 days before the sparrows worked out how to do it and they still don't all go inside the cage, preferring to reach in from the perch. 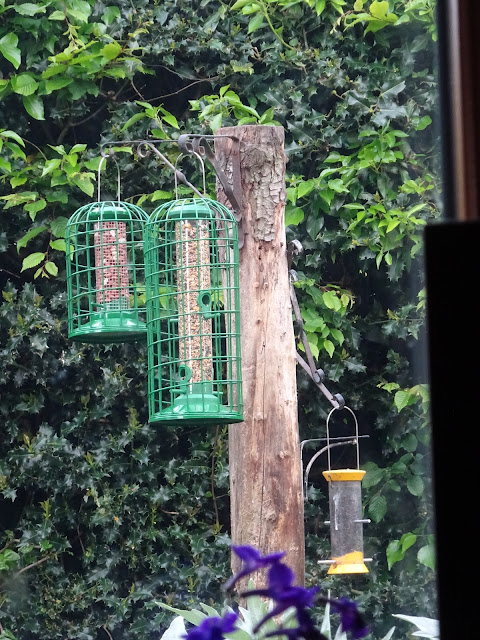 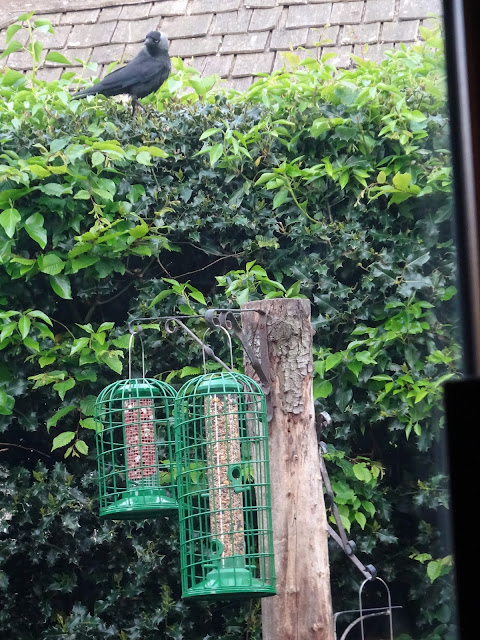 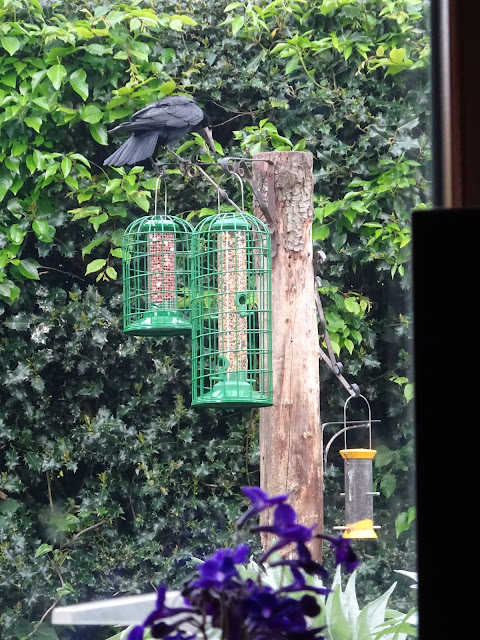 The Niger seed has attracted a whole family of Goldfinches which is brilliant! 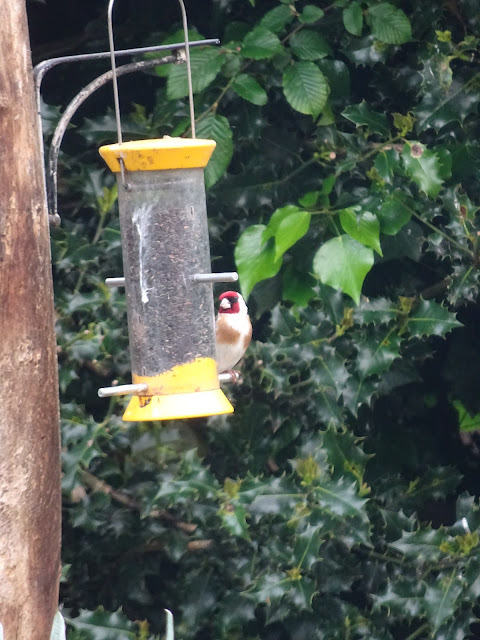 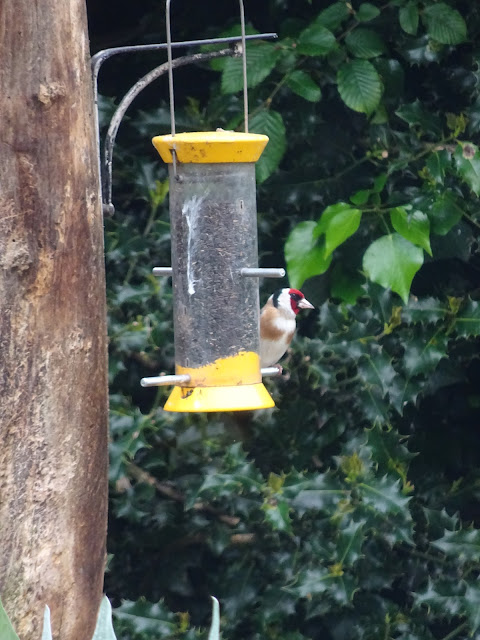 We've also been delighted to see several young Woodpeckers being fed by a parent. Sometimes they stay on the tree and wait to be fed or they go onto the dead tree in the front garden and wait patiently: 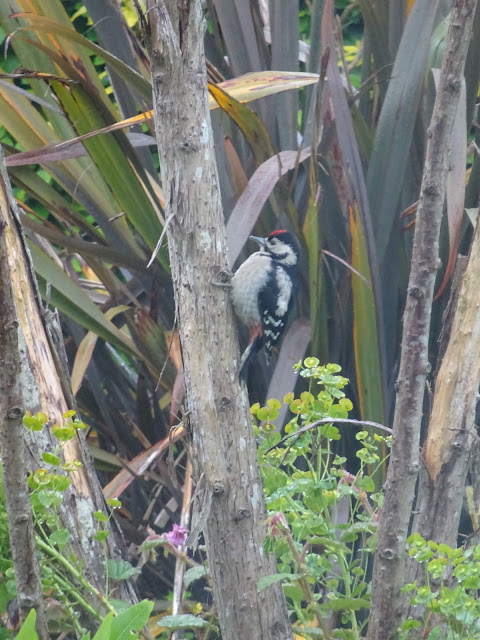 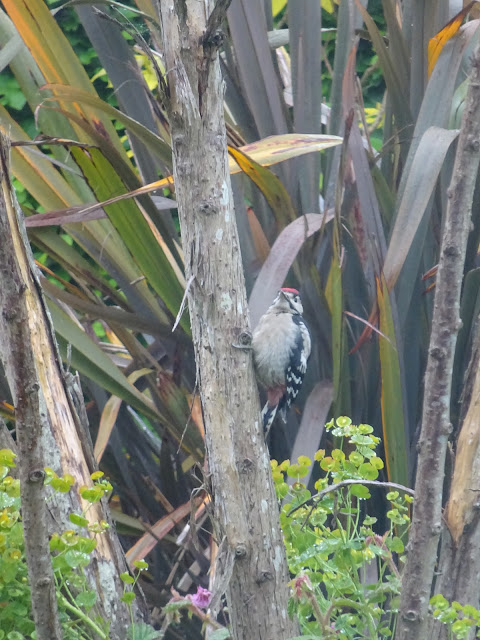 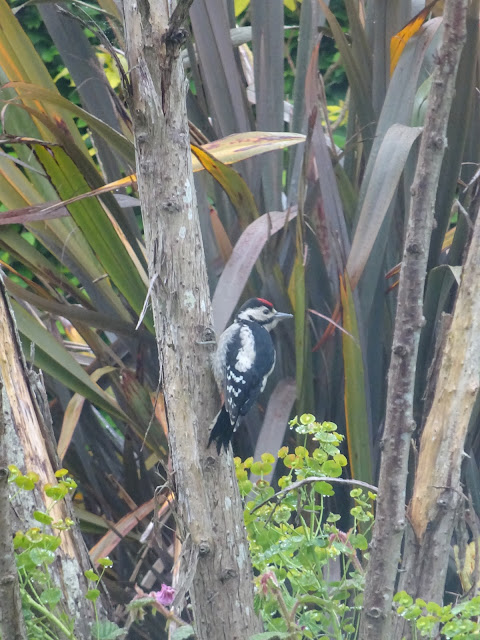 Last but not least, here's a sweet little Robin fledgling I spotted this morning: 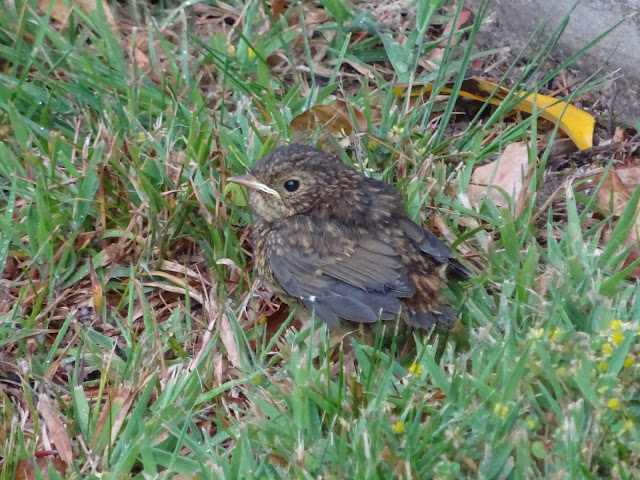 Next will be some photos from a recent garden visit, some knitting and another recce of part of he 1066 route.
Posted by Susie Hewer at 2:36 AM