Here's what I did at the weekend!

Well who'd have thought that I'd ever get on a bike and ride for 100k without the use of chloroform? Or get up at 3am, travel 92 miles, cross the sea on a ferry then do it all in reverse to arrive home ridiculously late that same day? - certainly not me I can tell you! But thanks to Paul and Sarah, that's exactly what Mike and I did on Sunday and it was actually quite good fun.

The day was glorious by the time we arrived in Portsmouth to get the ferry to the Isle of Wight even though we'd driven through rain to get there. Neither Mike nor I had ever been there so it was a huge adventure for both of us. We'd booked ourselves onto the 8am ferry because we didn't think we'd get there in time to join Sarah and everyone else on the 7am sailing, but as luck would have it we arrived in time to join them. It was nice to meet up with everyone and we passed the 40 minutes on the ferry chatting and eating toast (which is a good way to distract me from being on a boat - I am not a good traveller!).

We soon arrived in Wooton which was to be our starting point and everyone began unloading their cars. 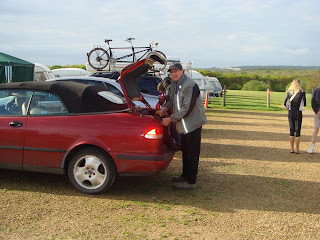 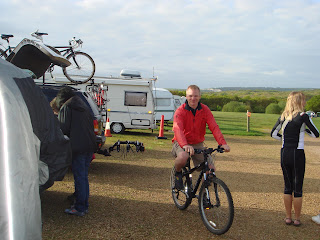 Paul was in charge of the bikes, being a complete bike geek (in the nicest possible way!) so he set up Maxine's bike for her then proceeded to assemble the tandem. It was reassuring to know that he'd checked the brakes!

Looking around the field was rather disconcerting as it was full of serious bikers, complete with state of the art bikes and wearing the latest bike gear whilst nibbling their super-serious energy bars. I wondered what they would make of a silly middle-aged woman doing her knitting on the back of a tandem. 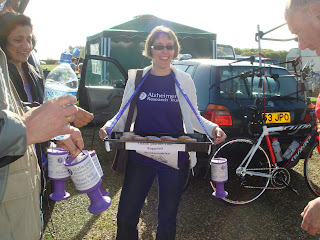 Sarah was resplendent in her Alzheimer's Research Trust tee shirt and matching purple pumps (I was rather jealous of them as they looked fab!) and she had made herself a tray to carry the cakes Sadia (to the left in the photo) had made to sell. 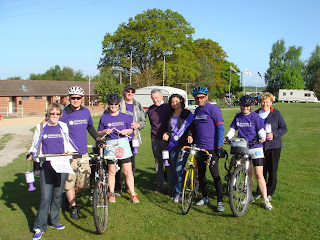 Here we have the super members of our team. From the left - Sarah, Paul, me, Mike, Sarah's dad, Sadia, Euclid, Maxine and Sarah's mum. Don't we all look great in our gorgeous purple tee shirts?! 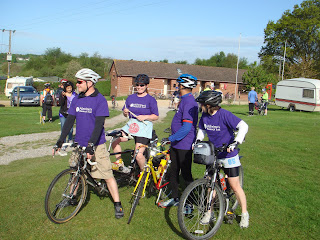 ........and here's the cycling team - Paul and me on the tandem with my knitting stitches cast on and ready, Euclid, who has ridden long distance events with Paul and Maxine, who is about to complete the London-to-Brighton bike ride and often does her training rides with Paul. In other words, everyone except me knows how to ride a bike. Hey ho, it's only 100k!

We did a little ride around the field with me knitting and Mike caught that on film so no doubt it will surface on You Tube at some stage, then we were off. I had no idea what to expect really but I knew that I could balance enough to knit on semi flat bits. What Paul hadn't told me was that 90% of the route was hilly and we would be going either uphill or downhill which is not exactly conducive to sitting upright and knitting. Anyway, we set off and the sun was shining so I gave it a good shot, knitting on the bits I could, whenever it was safe to do so (ie there weren't cars whizzing past) and just riding when I couldn't. 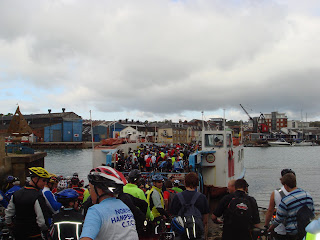 We came to a halt for a while at this little chain ferry. Whilst waiting for our turn to cross, a man spotted our tee shirts and came over to say that there was Alzheimer's in his family and he'd like to make a donation, which he duly did. Thank you very much whoever you were as we were all very grateful for your generosity.

When people went past us and saw me knitting they mostly laughed and some asked what we were doing. One very funny comment was overheard by Euclid who was riding behind us at the time - a woman remarked to her husband that she'd seen me knitting on the back of the tandem to which he replied that I was just sitting there and wasn't pedalling. She pointed out that I was actually pedalling but he really wasn't having it and said that Paul must be doing all the work!!! - As if I'd get away with just sitting there............. 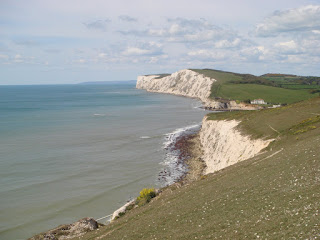 The countryside was stunning but the course really wasn't suitable for riding and knitting so although I struggled on until about 20 miles, I had to stash it and just pedal after that as it was just too dangerous to continue.


Here are the fab four at the top of yet another mammoth hill (goodness knows how many we climbed and descended but they were many and varied in their steepness).

I must admit that I really did enjoy the ride as Paul is a very good Captain and I felt safe with him in charge but there's no way I would have ridden a bike on my own. I have a great respect for Maxine and Euclid for completing the ride as it was certainly not an easy one.

We saw so many things en-route that I may have to come back and edit this as they resurface from my memory. Things that I recall are the beautiful hedgerows along the country lanes, the banter between the four of us, the variety of interesting houses we passed (beautiful stone farmhouses, thatched cottages, old churches), several National Trust properties (I work for the NT so was interested in them), amazing scenery along the coast, a white egret on the salt marsh, the smell of the sea, seeing yachts bobbing along on the shimmering sea, cyclists and motorbikers whizzing along the lanes. 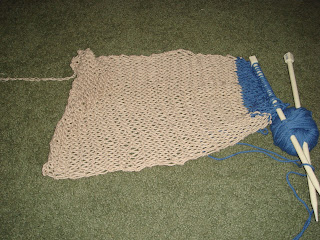 So here is my rather pathetic looking attempt at knitting. The thing is, it was much easier knitting on the tandem (on the flattish bits anyway) than knitting whilst running the marathon and ironically the bit I did manage measures about 18" so would have been much longer than my marathon scarf had I managed to knit all the way round. 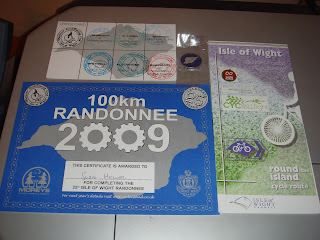 Some souvenirs from the day - the card we had stamped at each checkpoint, a map of the route, a certificate to say I really did complete it and a little badge. All things to cherish as we had such a worthwhile reason for doing it.

Whilst we were out gallavanting around on bikes, the support crew were busy out on the streets with their collecting tins and they will write their own account of their adventures. I know that Mike had a wonderful time and is looking forward to helping out again on World Wide Knit in Public Day in June.

Well done to all our Team.

I should just add that I was amazed that as a runner I managed to do it and that my legs felt fine afterwards with no aches and pains at all. I was especially pleased as the very next day I had to work which involved standing up all day and believe me when I say that working a Bank Holiday Monday at a National Trust property is not an easy option! I thought that it would probably catch up with me the day after though but it really hasn't so it just shows what your body can do if you are reasonably fit. The one thing I did find uncomfy though was my bottom and those potholes were most painful towards the end!!!!!
Posted by Susie Hewer at 1:34 PM

Wow, good for you - I can't believe you knit and ride. (Or knit and run, for that matter.)

I want to have a son just so I can name him Euclid.