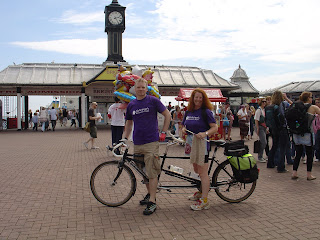 Well, WWKIP day has been and gone and I've still not found my knitting mojo. Yes, I sat on the back of the tandem and pedalled for about 2.5 hours whilst knitting using the lovely purple yarn provided by Sue at Kangaroo but my heart really wasn't in the knitting part.

Mike had to work so couldn't be with us but Sarah, her mum and dad stood around in the intense heat with their collecting tins and managed to collect £127.56 whilst the Kangaroo team collected an additional £50.24 at the Lewes carnival. For anyone who's never collected in this way it is jolly hard work and there are so many rules and regulations to follow - you mustn't approach people or shake the collecting tins, you must stay in one designated area between specific times. It's mostly thankless work but every so often someone will make a donation and thank you for doing it and that makes it all worthwhile.

It was very busy (as one would expect for a seaside town on a hot day!) and Paul had his work cut out to avoid all the pedestrians who just walk out in front of you on the cycle track. On several occasions he nearly had a knitting needle up his bum!

I was very impressed that Simon, a photographer from The Argus newspaper managed to spot us and we ended up being featured as Picture of the week! 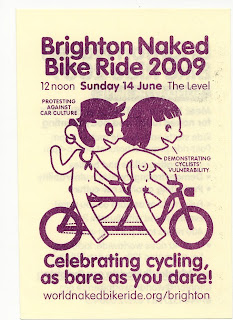 We encountered many different people as Brighton attracts hen parties, stag parties, street entertainers and people hawking tourist souvenirs out of suitcases before the Police move them on. A very nice young man gave us this little card about World Naked Bike Ride day and the very thought of that saddle on my bare bits made me laugh out loud - eurgh!

We were entertained by a man dressed as a clown, playing a tuba whilst balancing on stilts. The only trouble was his repertoire was rather limited and when you'd heard "Liberty Bell" for the 20th time it did begin to irritate! We also encountered a group of men celebrating a gay civil partnership. The 2 men making their commitment were dressed as pantomime dames and looked very fetching. They asked us if they could sit on the tandem and have their photo taken and Paul was very enterprising and asked them all to make a donation which they duly did, netting us an additional £12 by my reckoning. Sadly we didn't get a photo as I hadn't taken my camera with me.

I picked up Oregon yesterday and knit a couple of rounds on the sleeve without enthusiasm but thankfully something stirred within in me as the yarn fed through my fingers and I think I may be getting back on track. About time too! It's really odd as I've always got something on the go be it knitting, crochet, sewing or one of my many other craft projects but for the past few months I've just been very introspective and have ignored all the things that usually give me such pleasure - I've even sat and watched television without my hands being occupied and that is unheard of!
Posted by Susie Hewer at 12:45 AM

Congrats on another successful fund raising event! I don't think they've processed my donation but I'm sure they will. I was in London for the SnB Knit Crawl and had a blast as usual. I met up with a friend I met last year and we had too much fun, made a new friend, and hope to be there again next year. Is it possible for the SnB London to take on the cause of Alzheimers Research?
Any way, good on you again. Take care, Linda

Susie, I'd really like to interview you for the Rowan magazine (writing a feature for their spring issue -- would you mind getting in touch with me and we can arrange something? With many thanks, and much admiration --
Kate Davies
(from needled.wordpress.com / wazz on ravelry)