I am, by nature, a glass half full person with a sunny nature who always looks on the bright side, but this year even I have had to work extra hard at staying positive! Suffice to say that 2009 has not been one of my favourite years and I will be glad to see the back of it.

There is so much catching up to do that this will be a long post!

First of all I have said good-bye to the rest of my team at work and each had to have their own knitted gift: 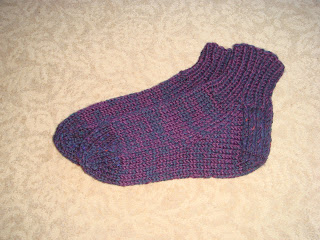 Slipper sox for Christian who has moved on to pastures as yet unknown. 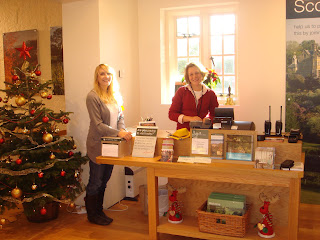 The heart fingerless mitts (in an earlier post) for Annelyn, who hails from Holland, seen here on the right next to Carmen our long-term volunteer from Germany. 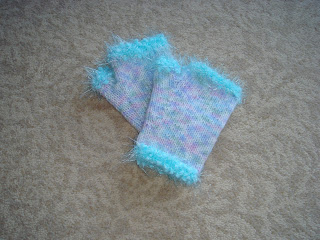 The sparkly, girly mitts for Carmen as they suit her perfectly. 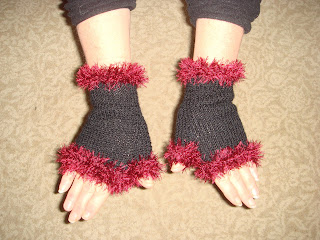 The black and red mitts for Linda who wears those colours frequently. 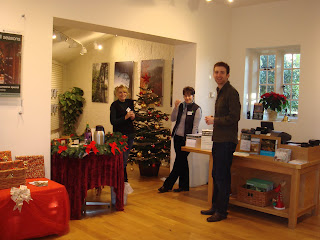 We had some 'tasting days' where we offered samples of food and drink that are available to purchase in the shop. Carmen, Linda and Seb sneak in a tasting of mulled cider when they think I'm out of the way. Little tinkers - just as well it was nearly Christmas! 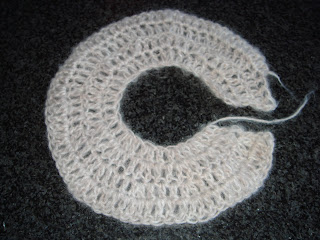 I wanted to make a gift for Angela at work who has been very supportive this year and I decided to crochet a twirly scarf. I experimented with a basic shape. 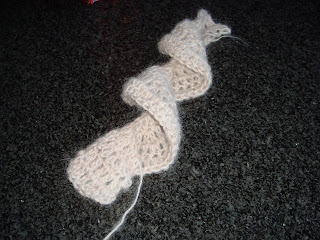 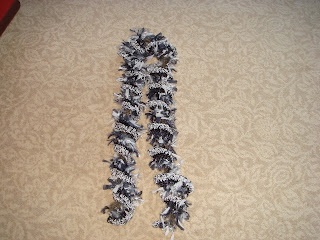 Which turned into this when twirled. It's just double crochet and trebles, increasing the number of trebles on each row to form the twirls. No pattern needed.

Then it was just a case of choosing the colours. I had a lovely fuzzy novelty yarn, a sparkly black viscose, a nobbly white cotton and a grey mohair blend and they all worked together a treat to create this scarf.


Then there's my beloved Mike:


Mike's back has been painful, an on-going issue with a slipped disc, but after 6 weeks it had seemed to be getting better. Wrong! Suffice to say that it suddenly developed into sciatic pain so severe that no amount of painkillers would dull the pain and he was in absolute agony. It got worse and worse over the course of a few days and he eventually had to be hospitalised in an attempt to alleviate the pain. X-rays and MRI scans were done and finally the pain was brought under control and on Christmas Eve he was discharged so at least we had Christmas together. Although still in pain, we are now embarking upon a plan to get him walking again and hopefully strengthen his back so that surgery will not be necessary in the future. 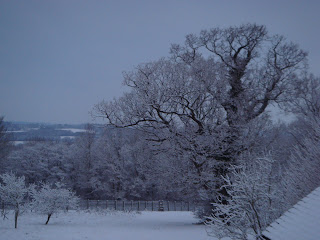 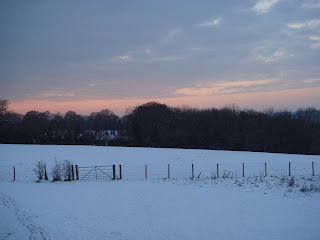 Whilst he was away we had snow. Both of us love snow and so I took some photos so that he wouldn't miss out.

I love seeing this beech tree bedecked with snow.


In the winter we can see right across the land to the furthest field. Everywhere looks so beautiful.

In the midst of the traumas of the last couple weeks there was a moment of great personal pleasure - a yarn & fabric sale! Am I a bad wife that I had such a moment of sheer delight whilst my husband was in pain? If so then mea culpa! I managed to grab several bargains in the space of 15 minutes and will have plenty of new projects for 2010 as a result. 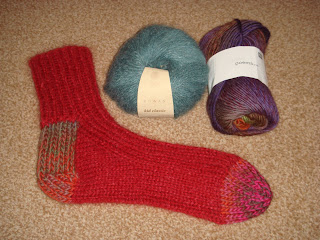 As we weren't sure if Mike would be out of hospital I decided to knit up some bed socks for him to make him feel special even though he was away from home. I snapped up some lovely soft Rowan kid merino and some soft and snuggly pure wool. It's just a basic pattern and it knitted up really quickly - he put them on as soon as I"d finished them and they are already firm favourites. 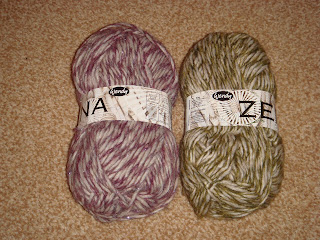 The variegated purple and green yarns are a mohair/alpaca/acrylic mix and I've got enough for a crochet project. 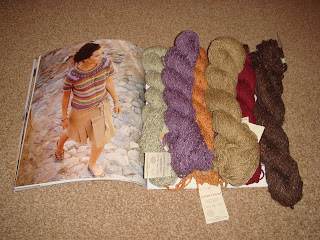 The Rowan Summer tweed was 25% off and I shall enjoy making this summer top which is knitted with a crochet trim. 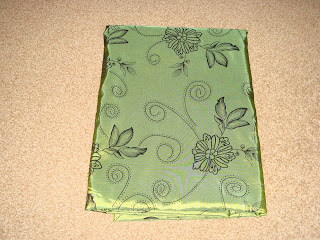 This gorgeous fabric remnant will make a super evening dress for me as the colour is great with my hair. I think a simple shift dress, close fitting and just above the knee. 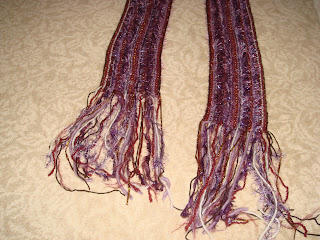 Then there's my scarf. A simple stripey affair using up bits and bobs from other projects but using my favourite colour - purple!

So, here's what I've been doing with it. I piled them all over the surface until I settled on a more subtle arrangement. Then I played around with the fringe. First of all I plaited the existing yarn ends and bound them using purple on one end and maroon on the other.

At the moment I am experimenting with adding extra fibres to add bulk and weight to it. Then I shall be experimenting with an edging as I had always intended to add a crochet edge to make it wider but so far I haven't found anything that I like. No more photos until I'm happy with the result!
Posted by Susie Hewer at 11:13 AM

Hello Susie! Christian finally opened his present (at Christmas, I believe) - I personally love the socks and have seen them on his feet several times since! All of these are beautiful presents.

Happy New Year to you and Mike!