I've been back to West Dean College for another course. I spent a week weaving willow a couple of years ago and have also attended courses on mosaic. This time it was rush weaving with Felicity Irons whose career I've been watching for many years now.

I first read about Felicity in the mid 1990s when she was featured in a magazine (I think it was Country Living). The reason she interested me was that she was reviving a dying craft; the art of rush weaving using our native Bulrush, Scirpus Lacustris, not to be confused with Reed Mace, Typha Latifolia which is often called bulrush in error. Since then I have read articles about her in newspapers and magazines including Gardens Illustrated so when I saw she was running a course at West Dean I couldn't wait to sign up! 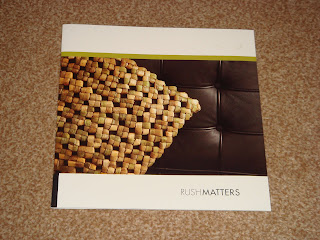 She has her own company named Rush Matters where she and her team produce the most beautiful things woven from rush. 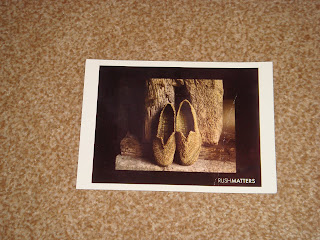 These beautiful slippers take her 10 hours each to make and so command a high price. As with anything handmade, it's the craftsmanship and time taken to make them that makes them so special.

She also does work for the National Trust and recently made a fabulous carpet for the dining room at Chartwell. Scroll through the photo gallery - it's the fourth one I think. She also makes beautiful fitted carpets and weaves lavender and other herbs into the rush to make it smell glorious. 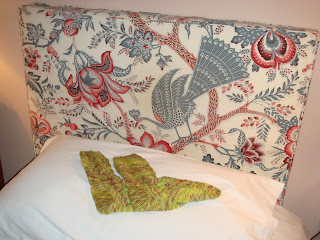 Now before I start talking about the course I must show my bed complete with home-made 'monkey' socks to make me feel at home.

I didn't actually wear the socks, as it was so warm in my room, but I thought I'd do an arty-farty photo shot showing the fabric on the bedhead just for the sake of it! 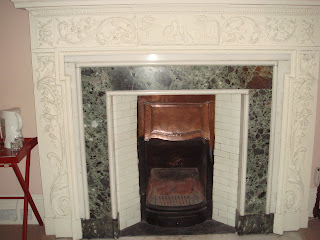 This beautifully carved fireplace dominated the room. I had a marvellous view across the front of the grounds towards the forest. I'd taken my trail shoes with me as I remembered how wonderful it was to run up there first thing in the morning. I should mention that the weather had been vile all week, including for most of my journey where I could hardly see sometimes as the rain was coming down so hard. 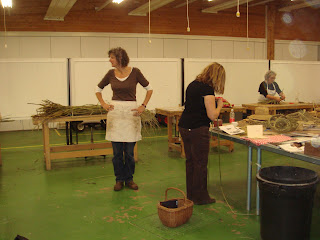 So here we are in the studio with Felicity in the middle, Jetta (who was from Denmark) behind her and Andrea (who is studying at the college full-time) to her right. We also had one more student, Ellie, on our course but she's just out of shot. Ordinarily there would have been more students but this was excellent for us as we got much more attention! 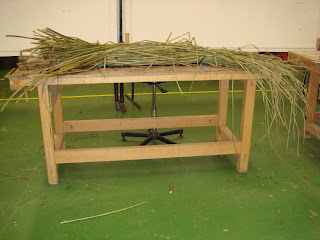 Here is the rush, tied into what is known as a 'bolt' (just like fabric). It is the most wonderful colour in varying shades of green but dries eventually to shades of golden brown. It also has the most amazing smell.

In order to work the rush it needs to be moist which makes it supple but it doesn't require the soaking that willow needs, just a good spraying with water (rainwater is best). As the studio was very warm we found we had to keep spraying the rush to stop it drying out and becoming brittle. 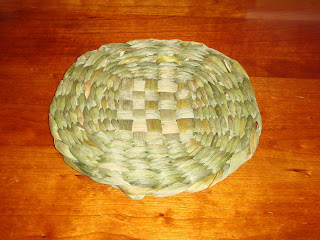 Felicity had brought lots of samples to give us ideas of what to make but first of all we made a simple circular mat after our evening meal on the first night. It was really exciting to get stuck in straight away! 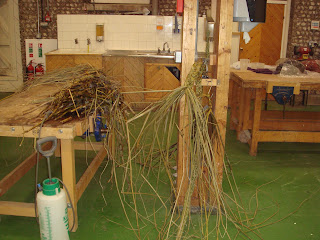 I had come to the course with a firm idea of what I wanted to make - a chunky oblong log basket using a 5 weave plait. Andrea also liked the idea of plaiting and so Felicity showed us both how to gather the rush together and do it.

Andrea tried it first and said she'd like to try a 9 strand plait. Thankfully, I was not as confident and just continued with my 5 strand. It wasn't long before a wail came from Andrea as she announced that perhaps a 9 strand was a tad ambitious!!! Felicity reminded us of this many times afterwards whenever we had ideas beyond our beginners' capabilities!

This is my plait soon after I'd started. After a couple of hours of plaiting I'd produced about 8 metres and my hands were really aching. It was at that moment that it dawned upon me that I might have quite a bit more plaiting to do in order to produce my log basket!

Later that day Andrea and I decided we'd had enough plaiting and would like to try something else and what interested us both was a bag made in what's known as a 'windmill' pattern. This too was never going to be a quick project and I think we were both quite relieved when it was time for afternoon tea so we could take a break. 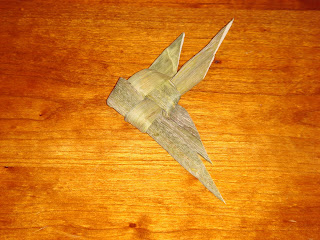 The first thing Felicity showed us was how to make the basic pattern which is like a small parcel.

We trimmed our first attempts to make them look like Angel fish.

There was a lot of hard work to get this finished on time but I did manage it (with a bit of help from Felicity). 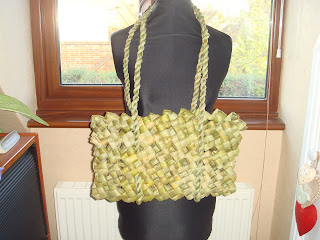 I made a simple handle of twisted Rush and Felicity showed me a clever way of whipping it together. I'm rather pleased with the result so far. 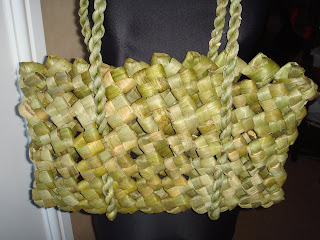 It just needs lining and perhaps a magnetic clasp to hold it together but I'll wait until I find just the right material before I line it.

I like the idea of a bright turquoise or purple silk to contrast against the dried Rush. 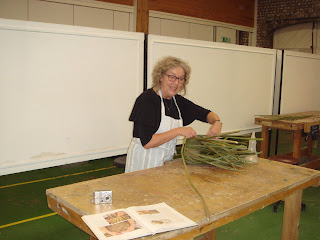 Jetta and Ellie had both done Rush weaving before and so had a clear idea of what they wanted to make.

Here's Jetta starting out on her hat. She's using a hat block and weaving around it. The Rush she is using has been chosen carefully to make sure it's a good colour and similar thickness and she was very neat in her work. 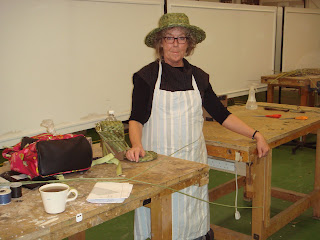 You can see how successful she was from this photo - it looks amazing!

She then went on to weave a bag around a block of wood, incorporating different coloured linen threads into the weave. It was very effective.

During our first day I discovered that Felicity is also a runner and we arranged to meet for a run each morning. I was somewhat nervous as she is much taller and more athletic looking than me but she was kind and slowed down to my plodding pace. It was nice to have company for a change as I usually run alone and only run with others during races.

As always we were spoiled with the wonderful meals at West Dean. Although I tried to show a modicum of self-control I failed miserably and came away feeling pounds heavier! 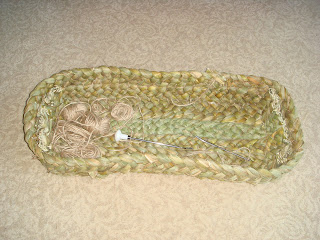 By the end of the course I'd sewn together 2 layers of plaits on the base of my basket. Even that took some concentration as I had to use a sail-makers needle and my first attempts looked dreadful! 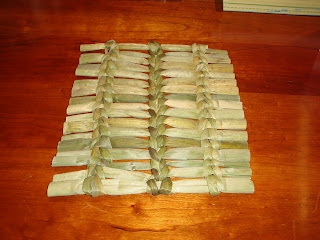 On the last morning I made this sampler which I'd like to copy as a cushion cover and perhaps incorporate some yarn into the weave. It would also make an interesting table runner.

Needless to say, I purchased a bolt of rush and some tools as I was eager to continue exploring the medium. I have already plaited and sewn on 2 more levels of the log basket and think I will probably have to plait about 3 more rounds.

I love trying new crafts as it has really sparked my imagination for new projects. Felicity is an excellent and very patient teacher and I wouldn't hesitate to sign-up for one of her courses again if I get the opportunity.
Posted by Susie Hewer at 4:13 AM

You always manage to post the most beautiful photos of your adventures.

Wishing you and yours a very happy holiday.