Well, that car crash certainly hit me harder than I imagined. Although I managed to run my 3 marathons I was still suffering with a very stiff neck and restricted movement across my shoulders which left me unable to hold my head in a good position to knit. I could only manage about 5 minutes before it started to ache like mad so I gave up in the end and turned to one of my other loves to fill the void while I recuperated - embroidery.

After many sessions with the Physio, an X-ray to check nothing was fractured I finally started to get some more mobility in my neck but I still had difficulty holding my head when looking down. This of course had meant that I couldn't use the laptop unless I piled it on top of a load of books and sat at my desk. It was very frustrating. At first it didn't interfere with my running but gradually over the weeks I was starting to stiffen up across my shoulders. This meant it was time for the magic hands of Mary Massage Lady who used her pointy, pokey fingers to get right into the knotted muscles and provide some relief. It hurt like heck I can tell you but after a couple of session with Mary and many more stretches I finally started to feel better.

I even started knitting again a few weeks ago but more of that later. So here's what I've been working on recently:

I'd often said I'd like to have a go at Bargello, or Florentine Embroidery as it was something mum did a lot of in the 1970s but I never tried. 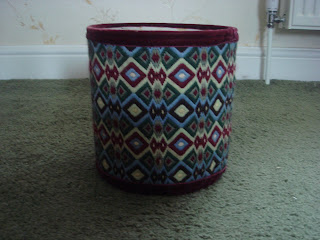 In fact, we still use this waste bin that she embroidered when I was a teenager.

I knew I wouldn't be able to use a tapestry frame on my knee so resorted to a floor stand which I could tilt to a good angle so that I didn't need to hold my head downwards.

I scoured the secondhand bookshops and found loads of fantastic books to get my creative juices flowing. Of course this now means I have far too many projects I'd like to tackle! I already had a massive amount of tapestry wool so I chose shades of blue and red/pink that match the curtains in our lounge and started on a sampler cushion. It is very addictive and satisfied my crafting need. 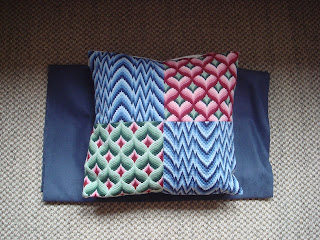 Here's the front just waiting for the backing. I'm going to make a braid to go around the edge and some tassels using the same colours of the cover.

My next project will be another cushion cover but maybe in a 4-way design. 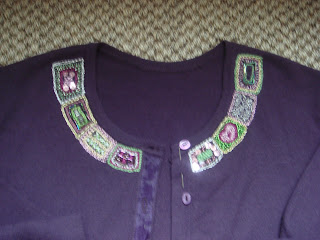 I also started to embroider a cardigan using some lovely silk and cotton threads, adding seed beads and bugle beads for added interest. Each section is different and uses easy stitches. I've just got to finish outlining the edges and inserting edge panels.

I'd forgotten how much I enjoy embroidery. I always used to do knitting in winter and embroidery in summer when the light is good but somehow the knitting had taken over the whole year.

Much as I love knitting, that won't happen again!

I found the most beautiful book in a secondhand shop recently - Swedish Embroidery by Eivor Fisher. It was published before I was born but still resonates with me today. I love the simplicity of this sort of work and am planning a wall hanging using crewel wool & embroidery silks based on one of the patterns. I got a huge amount of crewel wool from Sue at Kangaroo recently as she had reduced all her stock. You may remember that Sue very kindly provided me with yarn for my knitting exploits last year. 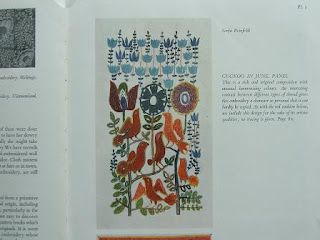 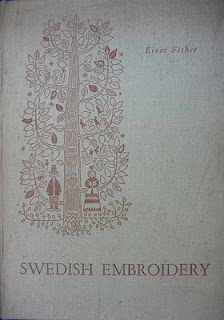 I'm always drawn to the simplicity of so-called Folk Art in all its guises, whether it's knitting, sewing or painting. I love the clean lines and uncluttered shapes where a simple line can suggest many things. 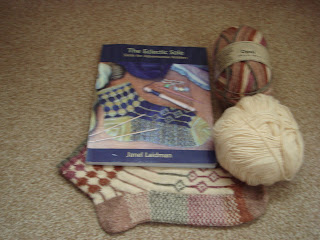 This all kept me going for a few months until I felt able to knit again. I decided to start small and make some socks from the book 'The Eclectic Sole' which is full of interesting sock designs. However, I would urge caution to anyone attempting these designs as they are not for the faint-hearted. Not because they are especially complicated but because of the errors in the patterns.

After much debate I settled on the cover design, named 'Migration' and cast on the required number of stitches. I'd never tried a toe-up sock before so it was interesting to start this way. I chose 2 balls of Opal sock yarn and decided to use the pale colour for the main body with the variegated yarn for the pattern. 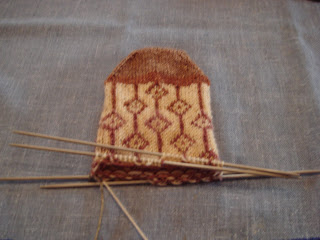 I soon reached the main pattern but after a while I realised something was different from the photo on the book - can you spot it? Yep, the zig-zag pattern after the toe was missing. I checked the chart and the written instructions in case I was being a numpty (which, of course, was not beyond the realms of possibility!!!) but I'd done it correctly. Off to Ravelry to check if anyone else had the same problem. Oh yes indeed they did! In fact, almost everyone had omitted them except a couple of people who'd worked out that you had to include a few rows from another chart before starting the foot pattern. Grrrrrrrr, time to rip it back a bit. 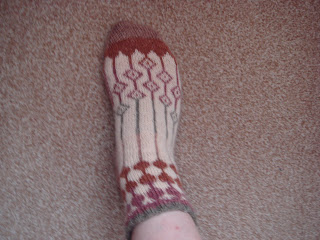 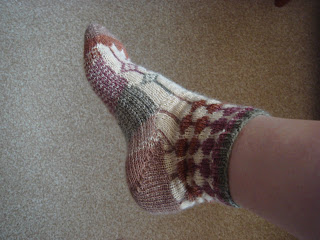 The next time I got a bit further and tried it on for fit. Crikey it was snug but there was no way this would go over my high instep. I checked the pattern to see what lay ahead and realised that I'd have to increase the foot stitches both at the start and towards to the instep. I looked at the pattern and it wasn't too complicated to modify although it would perhaps be off-putting for an inexperienced knitter to have to amend the pattern. Grrrrr, rip number 2.

I added an extra pattern repeat all over the foot and then another pattern insert to get over my instep. Happiness (although still a bit on the snug side). Then it was the heel. Now short row heels often leave those troublesome holes so I went on-line to search for an alternative. I found this method which I used. It took a couple of goes to get it just right but it was worth persevering as it's a neat method. Then all I had to do was lose some of the extra stitches I'd cast on for the instep.

I quite like the end result but I do wish that designers would get their patterns test knitted before publication!

Susie, I'm glad to hear you are feeling better. And I love the embroidery. I also used to do quite a bit of it but stopped...for some reason. Just found some materials yesterday going through a few boxes. Anyway, I hope your recovery continues.
Linda (back in the US now)