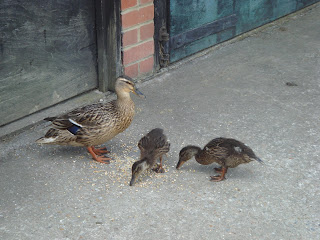 I just had to snap these little darlings before they got too big.

Mrs Duck didn't bring them to show us until they were quite large this year.

I think the threat from magpies, crows, rooks etc etc has been worse this year as there have been several nests raided.

I love watching them grow! 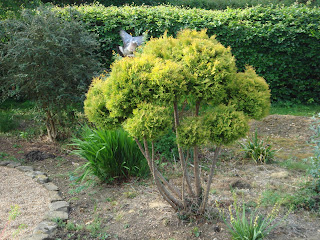 I started to cloud prune this conifer a couple of years ago as it was getting too tall and growing too close to the overhead telephone lines.

One morning, several weeks ago, I noticed a pair of Woodpigeons doing a reccy on it and I wondered if they were looking for a nest site. 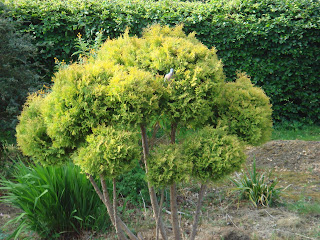 Sure enough, yesterday was a hive of activity with Mr and Mrs Woodpigeon going back and forth with beakfuls of nesting material.

I love this one with the little head peeping out from the undergrowth! 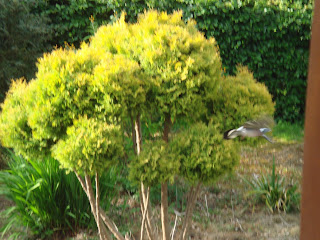 I must make sure that I don't trim the tree until their little ones have fledged.

They do seem to nest slightly later than other birds as I remember last year we were cutting one of the hedges in August and had to stop as we found a woodpigeon sitting one her nest (probably a second brood).

I must take a photo of the Owls sweater which was finished in April! In my defence, I was waiting to find just the right buttons for their eyes and I've only got a few more to sew on then it will be ready to make an appearance.

At the moment I'm spending every moment I can in the front garden to get things planted plus, yesterday I started my next marathon schedule for the Liverpool marathon. It's an 18 week schedule and it's very different from what I usually do. I'll write about it next time.
Posted by Susie Hewer at 3:38 AM