A massive well done to David Babcock from Missouri (hope I got that right David!) who ran the Kansas City marathon whilst knitting at the weekend where he smashed my GWR by knitting a mahooooosive scarf measuring 12' 1 3/4". This has yet to be verified officially by the adjudicators at Guinness World Records but that is just a formality.

Whilst there are several people who follow my blog and have made noises about doing it, David is the first to have actually done it and in what style! He's been meticulous in his training, doing knitting on his runs and researching every angle and all his hard work paid off on the day. I only wish that I could have been there to support him on the day but as I live thousands of miles away that was impossible.

When he posted the details of his attempt on Ravelry I was delighted and wished him well, to which he replied:


"I am trying to follow in your footsteps. I am not sure which is harder, the knit/run or the organization and fundraising. You are a great example for both. Starting momentum is rough but I hope I can contribute even a little to awareness and fundraising. Thank you so much for sharing your experiences in your blog. Your Alzheimer’s work goes on way past the races. Thanks for being a crazy redhead, you’re my hero. I remember how emotional I got when I stumbled upon my first marathon spectating experience, seeing all those people working so hard and pushed to their limits. I felt the same way reading about your work, doing hard things for good reasons. I am just one of many that quietly read your blog and am touched by your example."


He was also very generous in crediting me with the original idea and, even better, he dedicated his record attempt to the Alzheimer's Association of America:

"Susie Hewer's Guinness World Records were accomplished while she knit and ran to raise awareness and funding for Alzheimer's research in the UK. In honor of Mrs. Hewer and her record I am supporting the Alzheimer's Association Heart of America Chapter here in the U.S."


When I emailed David to congratulate him I asked him to send me some photos to put on my blog and he very kindly sent me these 2 excellent snaps taken by Jim Barcus of the Kansas City Star: 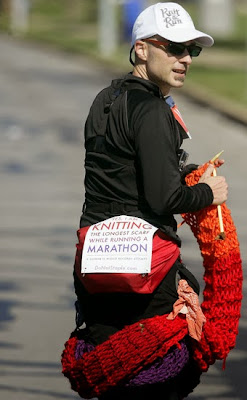 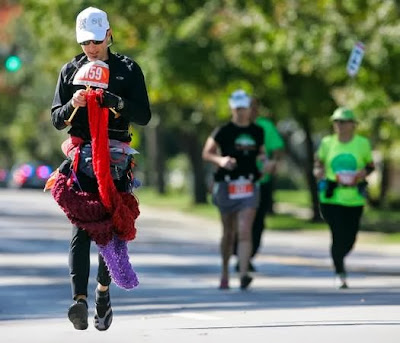 A few years ago I was asked what I would do if someone broke the record I had set. Would I go out and do it again to beat them? Would I be upset?

My reply was simply that when, not if (as I knew that someone would be attracted to such a silly record!) someone did it then I hoped that they would use it to do good, not just for self-gratification or the perceived glory of a Guinness World Record.

David has most definitely ticked the box on that score and I was very moved that he chose to support an Alzheimer's charity.

I did my first running and knitting stunt back in 2007 as part of my 50th birthday challenge and I think we have had some good mileage (apologies for the pun!) in the publicity for ARUK from it already.  I never expected that we'd get much attention at all. I've done it 4 times now.

I also said that I would not be doing it again after the London marathon earlier this year as it really does hurt my neck a lot (the result of a car crash  a few years ago) and if I do knit and run again it will only be for show, not for the GWR. I have no intention of trying to better David's length of scarf because in order to do that I'd have to practice and I have enough trouble keeping this old body marathon-fit without adding knitting into the equation!

For me, knitting whilst running has only ever been as a publicity stunt to attract attention to Alzheimer's Research UK and that's the way it will stay.

Am I upset that he's beaten me?  Heck no, I'm just mightily impressed at what he's achieved and he thoroughly deserves the record.

I've been chuckling whilst reading some of the comments about it on Vogue Knitting's Facebook page.  Lots of people have posted their own ways of multi-tasking with their knitting, for example whilst walking or waiting in queues.  Others talk about knitting whilst using gym equipment, which seems odd as that means you wouldn't be putting your full effort into the exercise and could risk  personal injury. But the comments that made me exclaim 'you cannot be serious'  are where people have said that they knit whilst driving which is clearly dangerous to themselves and to other road users!