Yep, I'm still playing catch-up and I shall probably have to miss things out otherwise I shall be blogging every day!

Whilst reorganising my room and sorting out my craft materials I came across a bundle of tapestry yarn and a needlepoint kit to make some curtain tie-backs. Oh my, that brought a tear to my eye as they had been chosen by me and mum and were intended for her bedroom when we moved to our present house but they were never made. I probably don't need to explain that when caring for my mum in the later stages of dementia, there was little time for needlepoint and so the kit had been put away and forgotten about.

I haven't done much needlepoint for a while and it looked such a fresh and attractive design that I decided to do it, not really thinking about whether I would make them into curtain tie-backs.

I thoroughly enjoyed stitching them and I think they're rather pretty but they don't fit the colour scheme in the spare bedroom so I'm going to be brave and use them for some crazy patchwork. Yes, that's right, I'm going to cut into them (gulp!). I don't know when I'll start this but I've been meaning to make some new covers for the bolster cushions on our bed and I like the idea of a Spring theme. 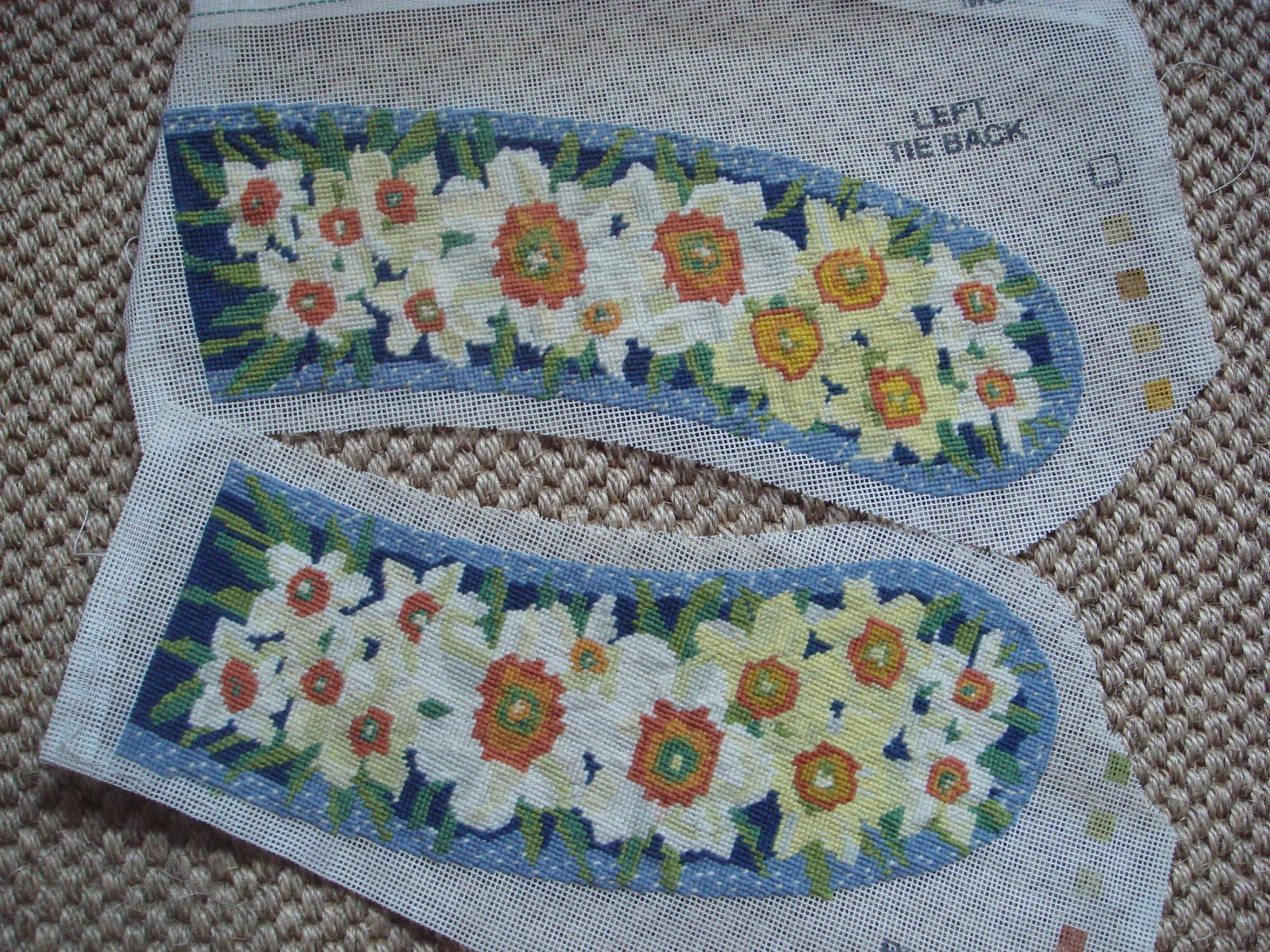 Or I could take small sections and use them as the basis for a pincushion, or mounted in a frame, or stuck around my pen/pencil holder to brighten it up. I've now got lots of ideas floating around in my mind so I'll need to go for a nice long run as that's when my best ideas are formulated.

This should have appeared on my blog ages ago but I've been waiting patiently for Mike to strike some poses whilst wearing it but, as you might have guessed, that hasn't happened. Oh the joys of a camera-shy hubby who doesn't want to be my model!

Whilst waiting I took the marking the button positions shot: 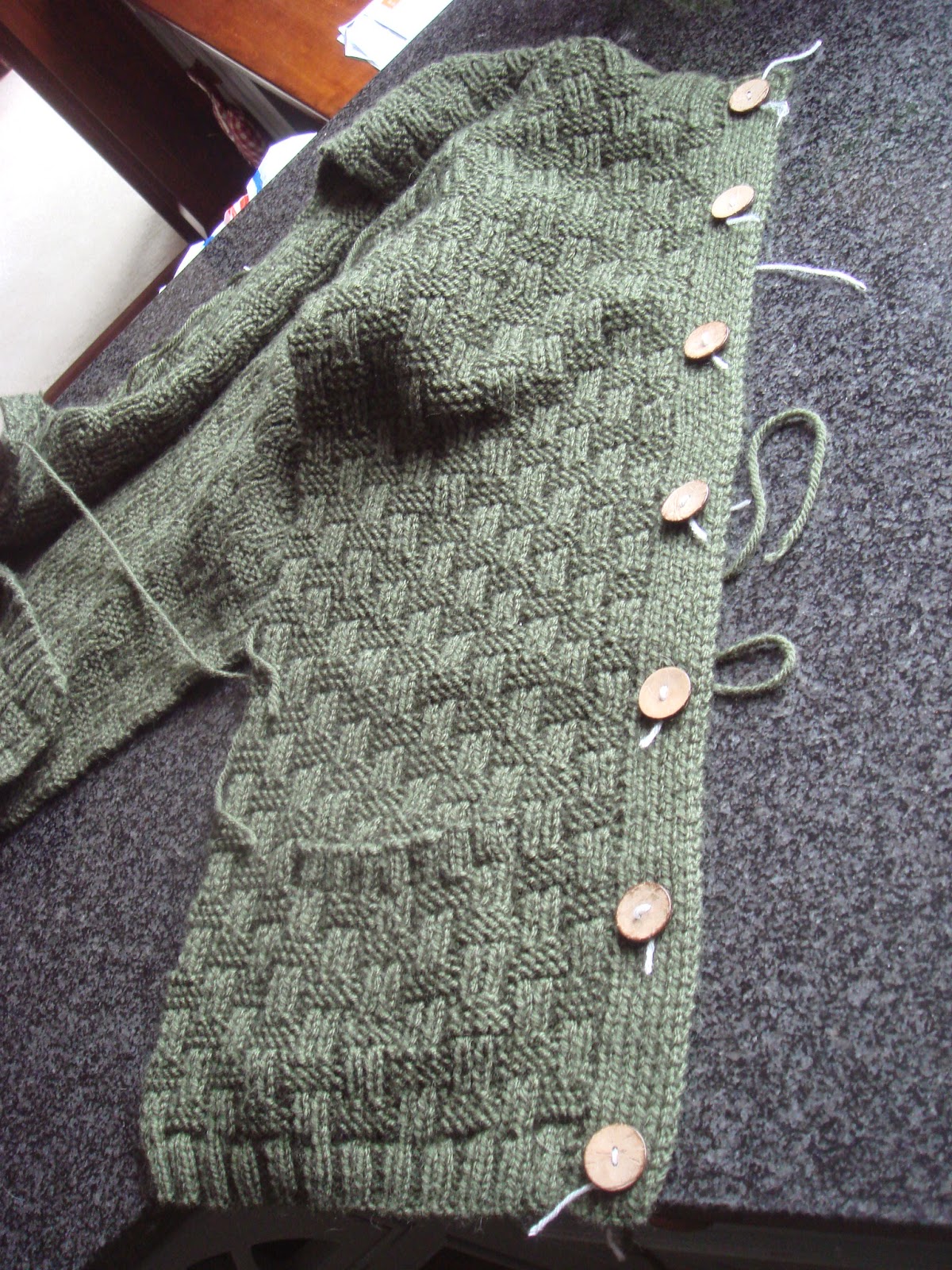 The  folded up shot: 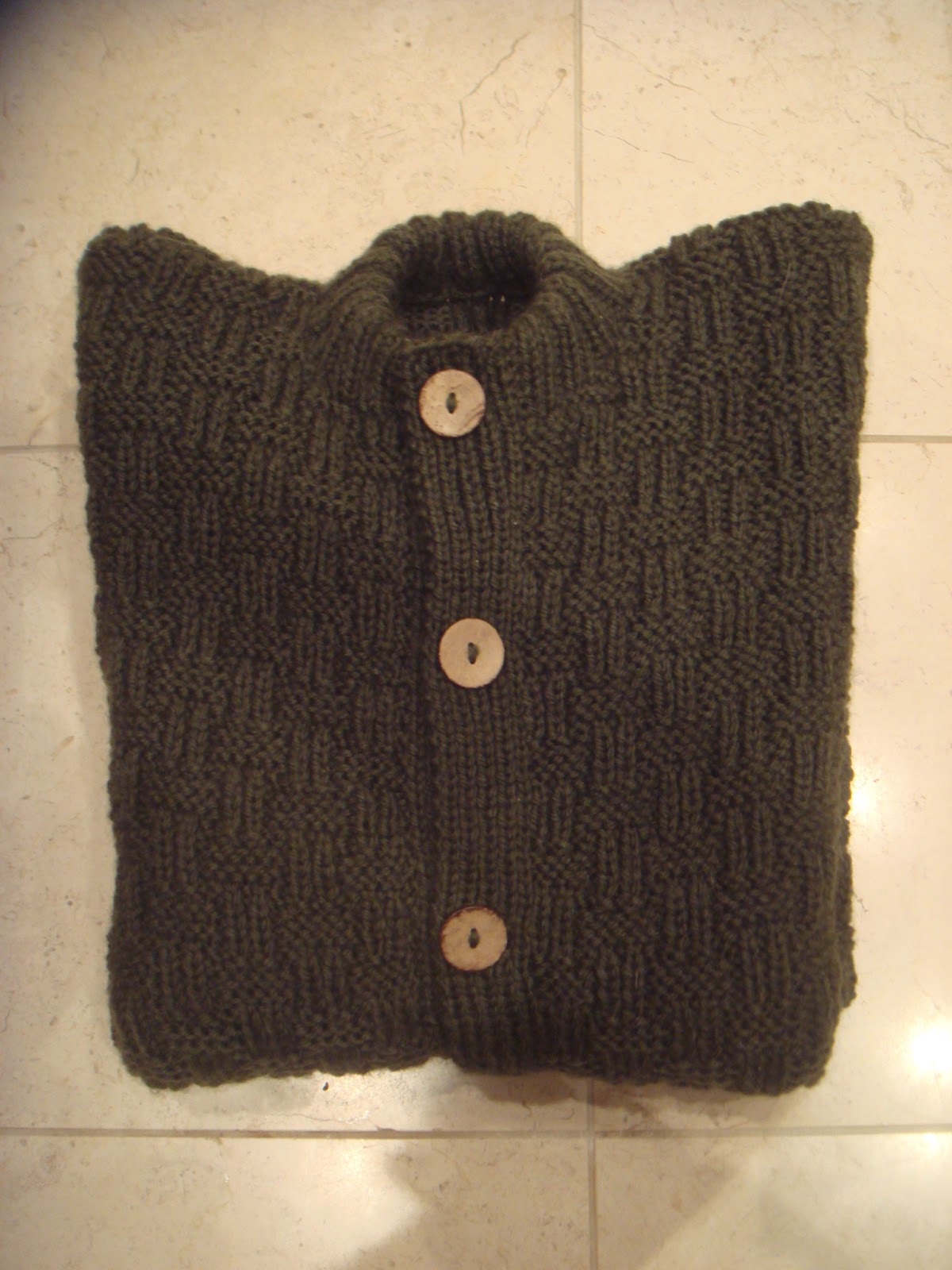 Then last night I gave up and decided to model it myself!

In the bathroom mirror: 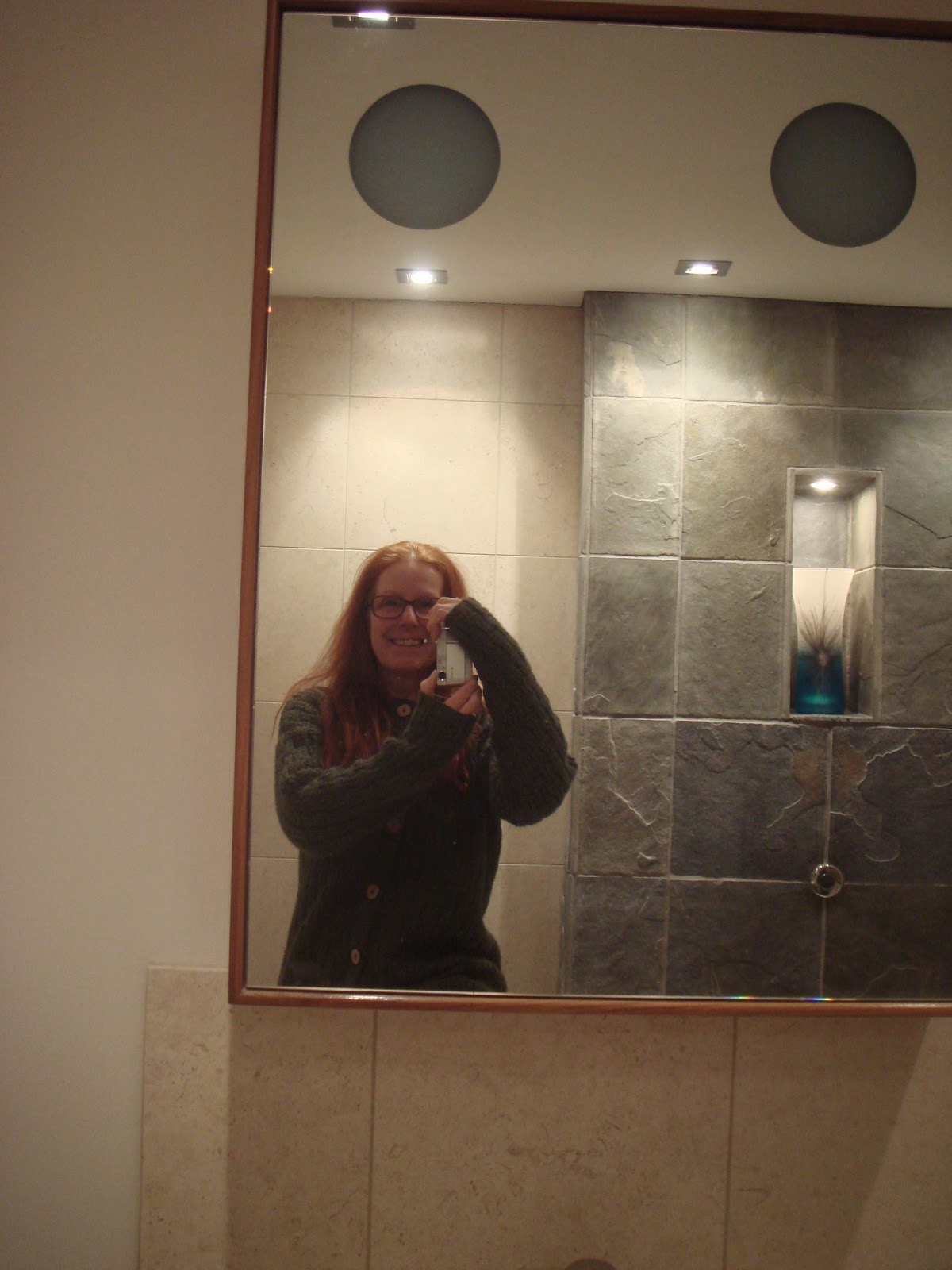 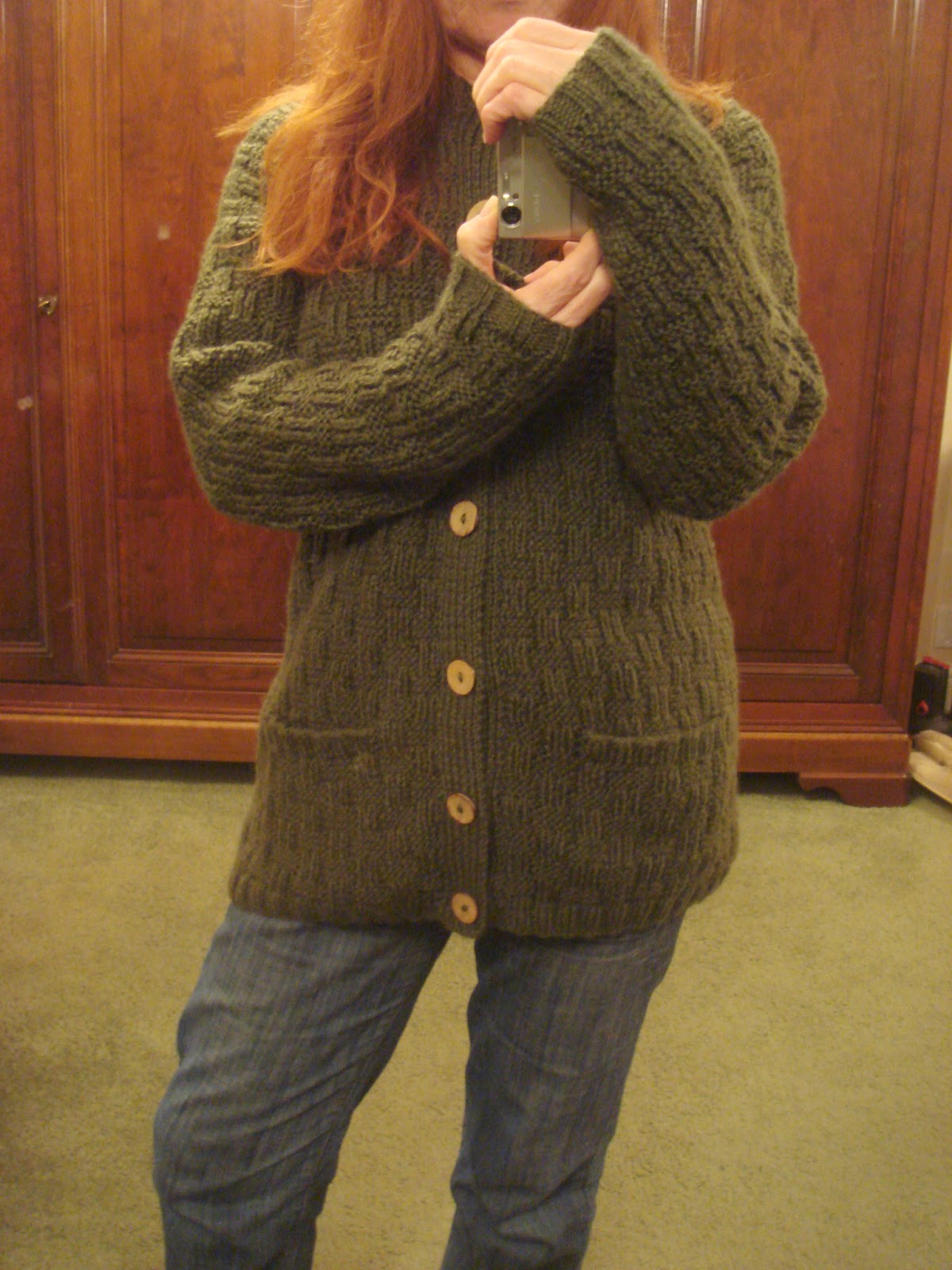 The verdict? A jolly useful and very warm cardigan but most important of all is that Mike loves it. He's actually wearing it today and it really makes me happy to see him wearing something I've made for him, knitted with love in every stitch.

The pattern, I'd saved from an old magazine, had several errors and things that I tweaked because I didn't like how it worked out as written but overall I enjoyed doing it. The stitch was really easy to memorise and, against my better judgement, I liked working with the yarn Stylecraft Life Aran, a 75% Acrylic 25% Wool blend in the Olive colour way. Mike chose this yarn over the more expensive yarns I showed him, mostly because he liked its colour, so it was a very economical knit. The high acrylic content should ensure it wears well anyway.

I'm off into London again tomorrow to speak at the ARUK Supporters' Day for people running the London marathon in April. I'm rather excited as there's a very special person coming along too but I'll save the details for my write-up next week.

The only downside is that due to the engineering work going on at London Bridge railway station there are a very limited number of trains stopping at my station on the outward journey and the return journey will take 1 hour longer than usual so I'll be spending more time travelling than I'll spend at the meeting! Never mind, I shall arm myself with a new crochet project, my current reading material (A Thousand Splendid Suns by Khaled Hosseini) and the newspaper to pass the time.
Posted by Susie Hewer at 3:03 AM