Another Bank Holiday, another fab marathon organised by Traviss and Rachel ; a cakeathon to be precise. But you've already run a cakeathon haven't you Susie? Indeed I have, back in May but I really wanted to do this one (the medal is pink as opposed to the blue one I got before. Shallow, moi? Yep!) but it had sold out before I could enter so I did the other one instead. Then someone pulled out and I got my place. Hoorah!

My banana cake was well received last time so I baked another one.

I noticed there were a lot of vegans running this one so I thought I'd make my vegan chocolate cake and ask them for feedback on ways to improve it. I've been a vegetarian for over 25 years but I always go vegan for Lent each year so I've developed my choccy cake for those weeks when I can't partake of ordinary cake.

Then I wondered if there would be anyone running who was gluton-intolerant and thought it would be very difficult for them so I decided to make my cake with gluton-free flour which I've never tried before. This of course meant that I had to tweak my recipe so I looked at several different recipes for gluton-free cakes on-line and then altered my recipe slightly and crossed my fingers that it worked!

As the event was created to celebrate 100 years of the Women's Institute there were prizes again for the best cakes in several different categories.

Right, back to the event itself. My journey there had been slow as it was very foggy on the motorway so I arrived later than planned, phoned Mike to let him know I'd arrived safely and sat in my car looking at the torrential rain bucketing down. Deep joy, this is going to be a soggy one I thought. Never mind, I haven't had a really wet marathon for a while and I don't mind running in the rain. The thunder and lightning were an added bonus!

I'll start with a few photos to set the scene:

These next 2 made me smile as they look so dry. Later they turned into a water course of huge puddles. 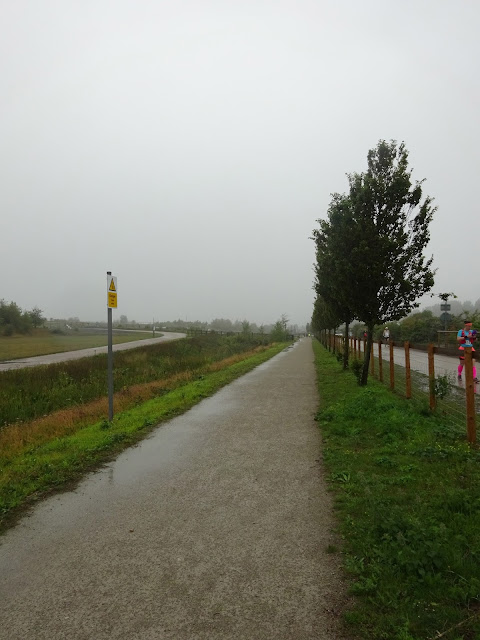 Fancy dress is always encouraged and these 2 ladies looked fab.

There were lots of people I knew there so there were plenty of hugs and chats which was nice. These events are always very friendly anyway.


That's the before stuff done now for the running part. Last time I had one of those awful gremlin-ridden runs but this time I was completely in the zone and enjoyed every moment, despite the weather trying to dampen our spirits.

It didn't rain for a short time after we set off and I was having a little catch-up with Carolyn when the thunder started to rumble in the distance. It was really humid and we both commented that it was affecting our breathing. Then the rain came and kept coming for hour after hour.

We got wet. My cap was so wet that all my hair was soaked. For the first time in ages I had some chaffing but thankfully no blisters.

The paths turned into a puddle fest and you either had to skirt around the edges or squelch right through the shallower ones. As the paths were constructed of compressed grit they did drain quite well but as you splashed through the puddles you inevitably got some of the grit in your shoes and after several hours you could really feel it as it worked its way through your socks. I chuckled at Maryanne who I saw taking off her shoe and sock to try and get rid of it and exclaiming that it wouldn't come out!

After 3 laps it was time for a cake break so I left Carolyn at the water station and headed off for a piece of my banana cake. I was delighted to see Jo there, although she had to leave after 1 lap, and had another hug and a catch-up before she headed for home. I looked around for Carolyn but couldn't see her so just plodded off. I later discovered that she'd looked for me, couldn't see me and thought I'd already gone off so she ran really fast trying to catch up with me whereas I was happily pootling along behind her. DOH!

I took a second cake break after 6 laps and tried my vegan cake. I was quite pleased with it as it was really nice and moist. I think I need to work on the icing mix though as I felt it was a bit too soft. Then Jackie told me I'd won a prize which was a lovely surprise and most unexpected.

I didn't take any photos during the run as I was concerned the camera would get drenched. To help pass the time I looked out for berries of which there were many - Hawthorn, Spindle (Mandy was delighted to spot them as they remind her of her grandma. I love how little things like that connect us with loved ones), Blackberries, Viburnham, Buckthorn (those bright orange berries on shrubs with silvery leaves), Elderberries, Sloes (Mmm, sloe gin!).

I'd told Mike I might do an extra lap if I'd done my last lap in about 5:15 and felt OK. I said I'd phone to let him know so he didn't worry but decided against it in the end as I couldn't get a phone signal and it would have taken me over 6 hours to finish. I'm regretting it now. Serves me right for taking cake breaks!

Anyway, I trundled home happily in 5:32:57 with more left in the tank which bodes well for the ultra I have planned for the end of September.

Traviss presented me with my lovely cakey medal complete with a special badge for having run 300 miles at their events this year. I shall certainly be running more of their events next year as not only are they within comfortable travelling distance, they are so well organised and friendly.

Many thanks to everyone who made yesterday special.
Posted by Susie Hewer at 2:25 AM

A great post! Lovely to share the run with you and congrats on the cake prize too!

Thanks Kat. Glad you enjoyed the event despite the rain. Hope to see you again soon. Susie x

Having just counted up, I imagine that with 22 SVN events booked our paths will cross shortly!
We're at Black Hugin, Tolkien and Ranscombe in the next few weeks 😄

Sounds as if you're hooked too Kat. I'm not doing Black Hugin (I like to see where I'm running!) nor Ranscombe 'cos it clashes with the Sussex marathon but will be at Tolkien so see you there!