Mike and I had promised ourselves that we'd explore some bits of Hastings that we didn't know and so the day after my aborted run we headed off to the seaside for an adventure. Although we've visited many times there were still several areas we hadn't explored so we were really looking forward to it.

Our adventure started in what's known as 'the old town' and we took the opportunity to have a look round the Parish Church which we've walked past many times but had never found it open before. We were fortunate because there was a toddler group in there in a specially built inner area surrounded by glass.  They were having a singalong/baby-dance type session and both mums & babies looked as if they were having great fun. 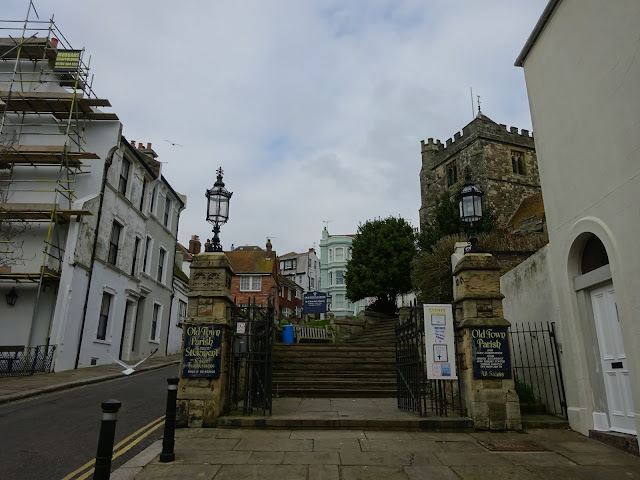 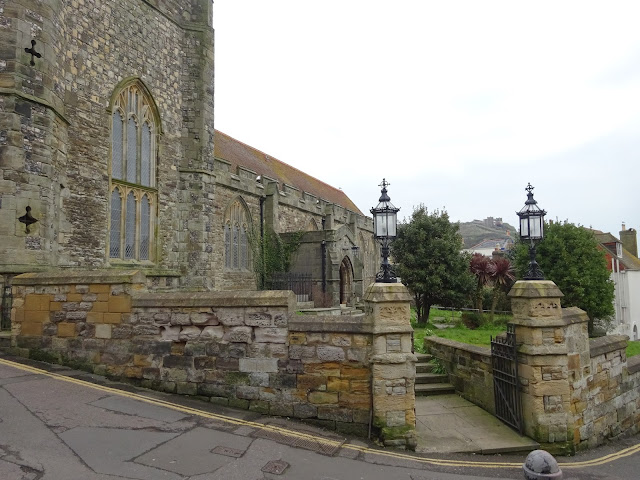 As we walked through the door my eye was drawn immediately to this amazing modern stained glass window behind the altar: 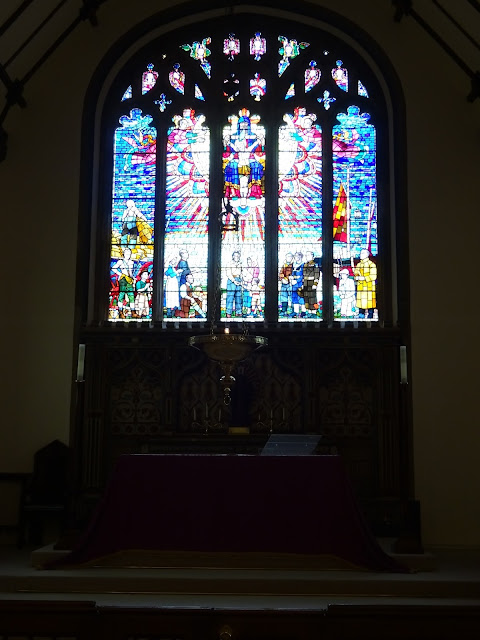 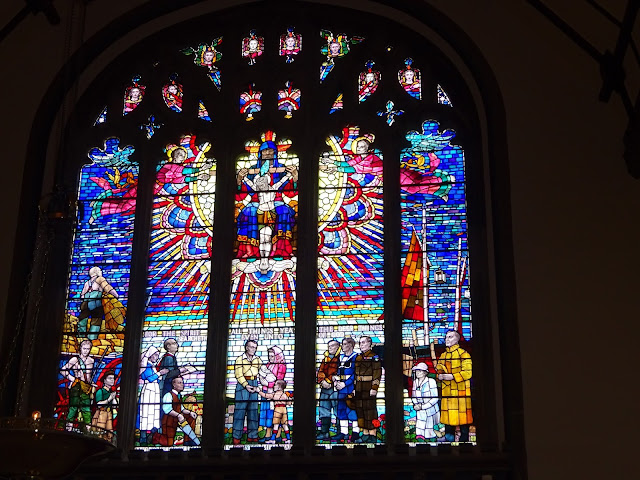 As I approached I saw these delightful kneelers. I have a whole load of photos of kneelers from various churches we've visited but I think these are some of my favourites. They're so bright and modern: 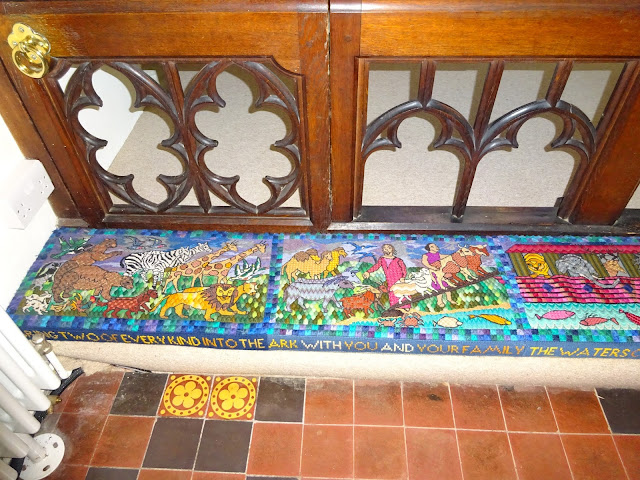 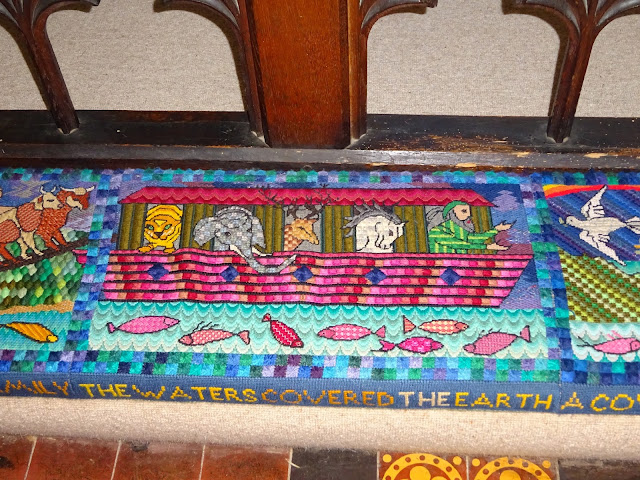 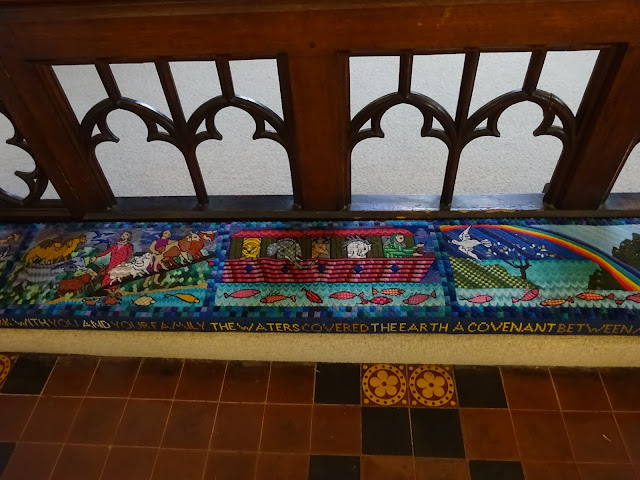 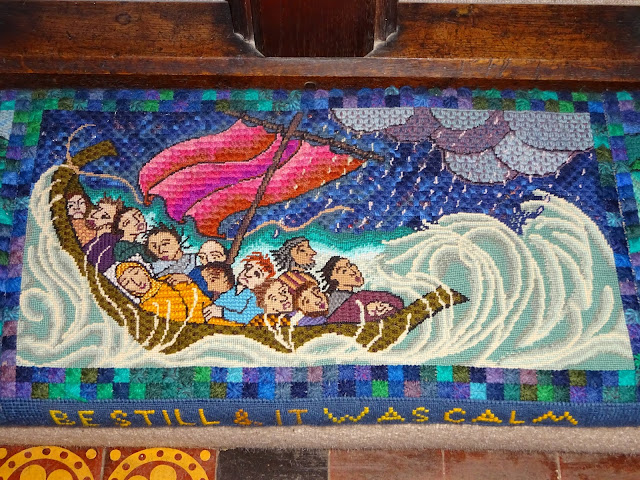 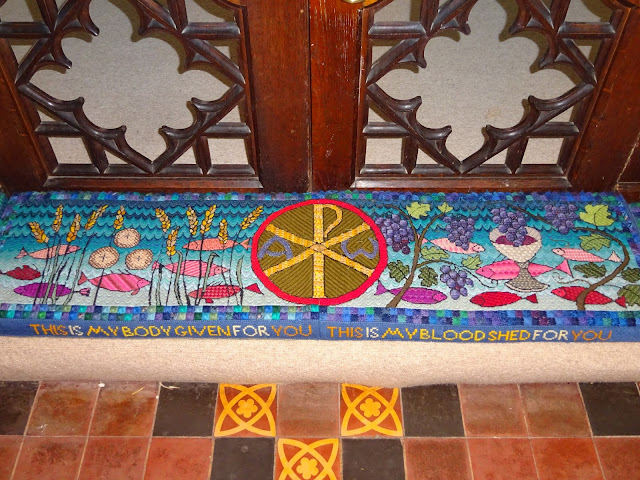 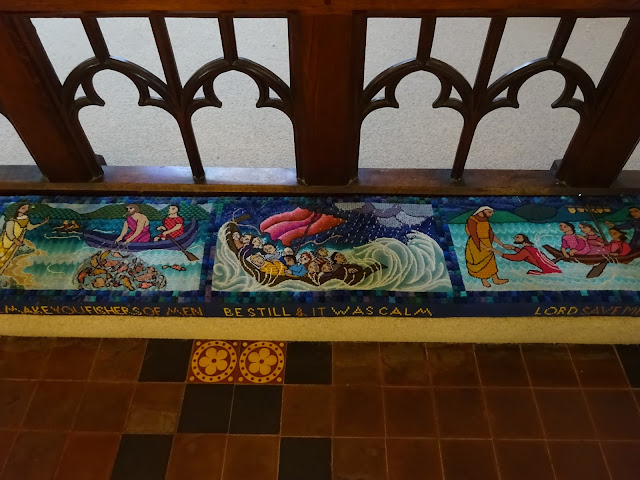 There were many more beautiful windows but I've just selected 2 more of the modern ones to share: 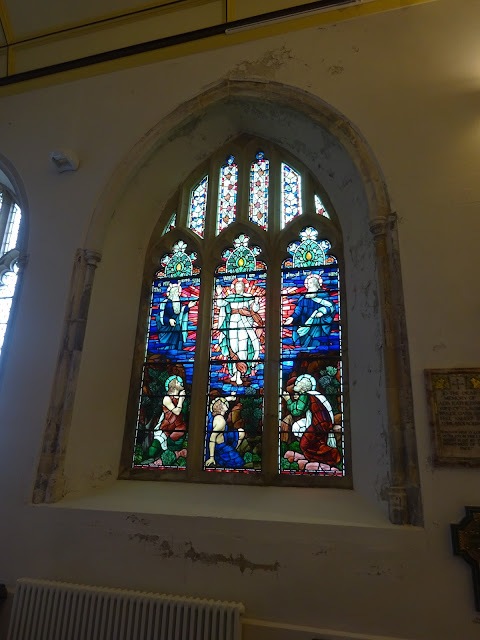 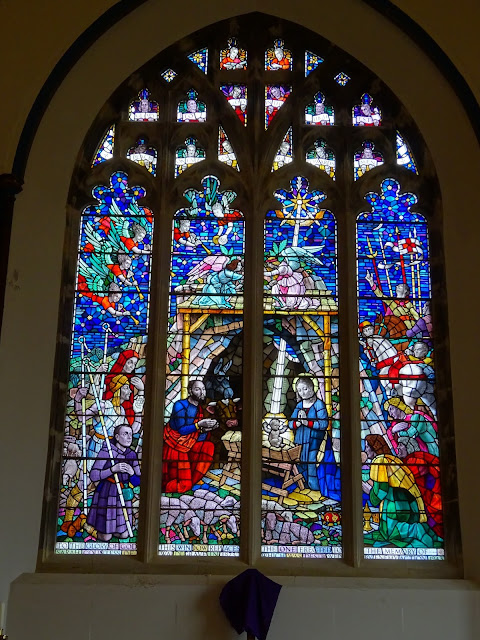 Then I spotted this smaller one in an alcove and next to it was a plaque: 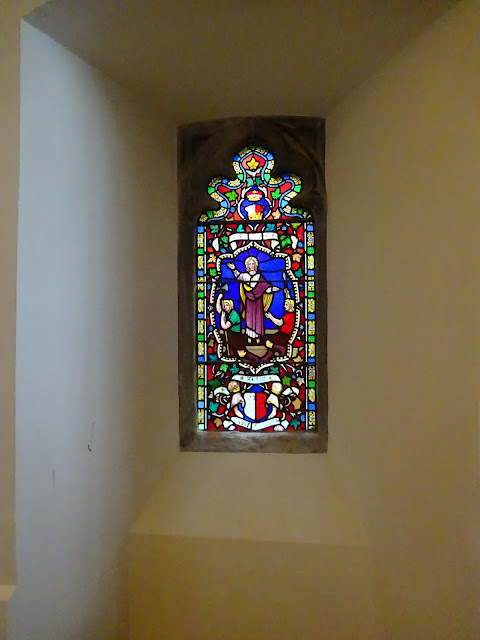 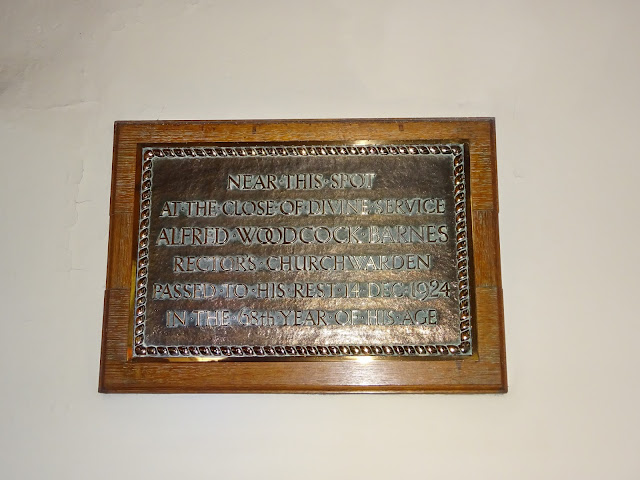 Having had a good luck round we then headed onwards and upwards towards the remains of Hastings Castle. We knew it wouldn't be open to look around but we were looking forward to the views from on high.

After a little walk around the area we went back down the hill for some sustenance - coffee and cake at one of our favourite haunts. Suitably refreshed, we set out on our next adventure - to climb the hill up towards Fairlight.

It was rather steep but the views were well worth the effort:


We wandered around at the top for a while but it was rather muddy and as it was nearing lunchtime by then we headed back down the hill to have a look around the Jerwood Gallery. I took a few more photos en-route though: 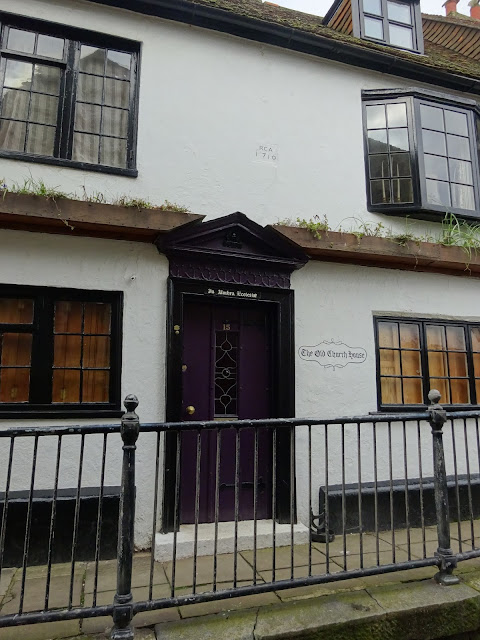 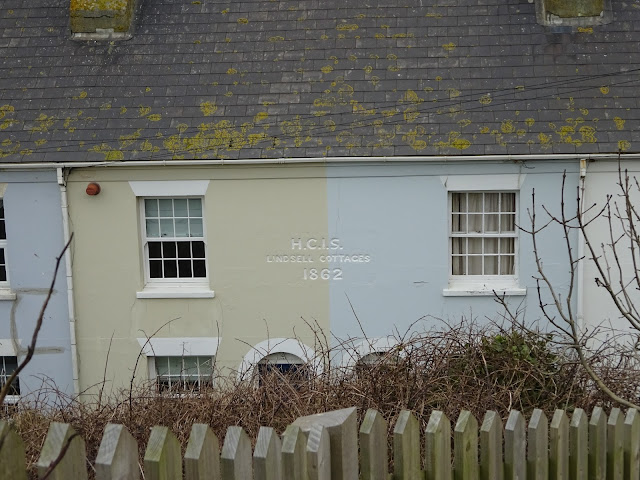 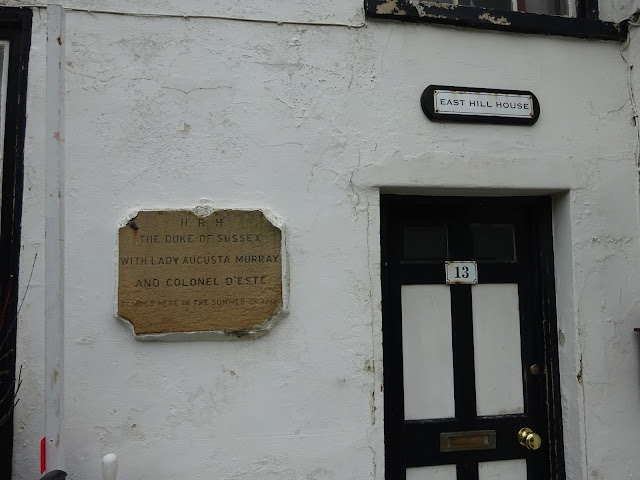 The next few photos are of a house which has been photographed by many tourists who think that it  is really old, but it isn't! I remember seeing an article in a magazine ages ago about the man who constructed it using salvaged materials. I absolutely love it and each time we visit I always look to see if he's added anything else.

Finally we reached the Jerwood Gallery and crossed over to see if the exhibition was of interest. John Bratby (Everything but the Kitchen Sink) and John Piper (An Eye for the Modern). Ooh yes please! 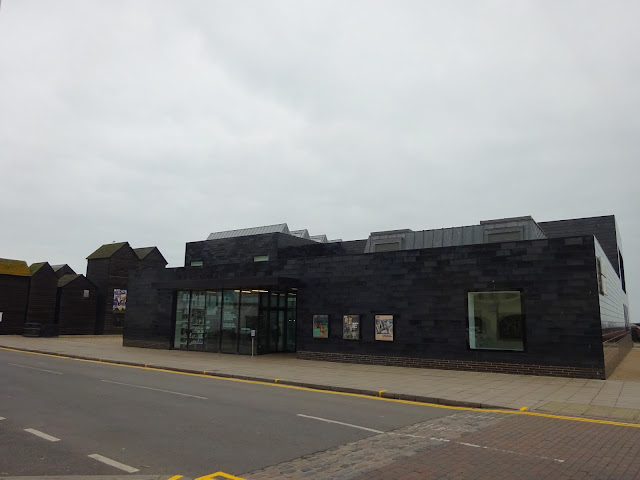 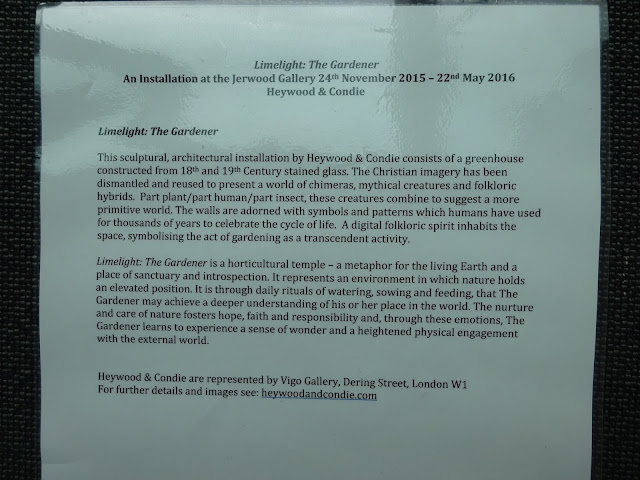 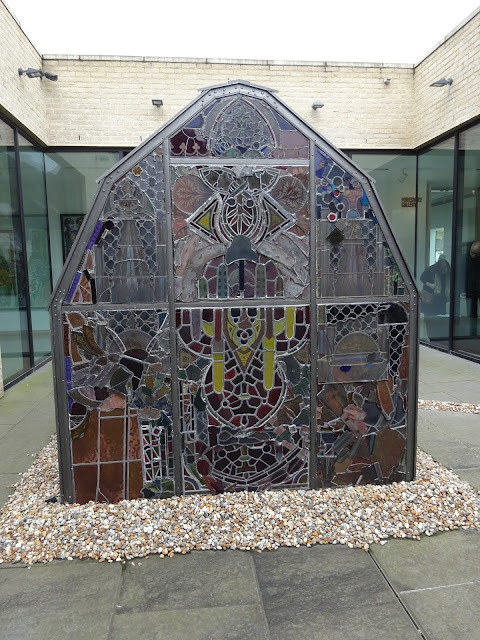 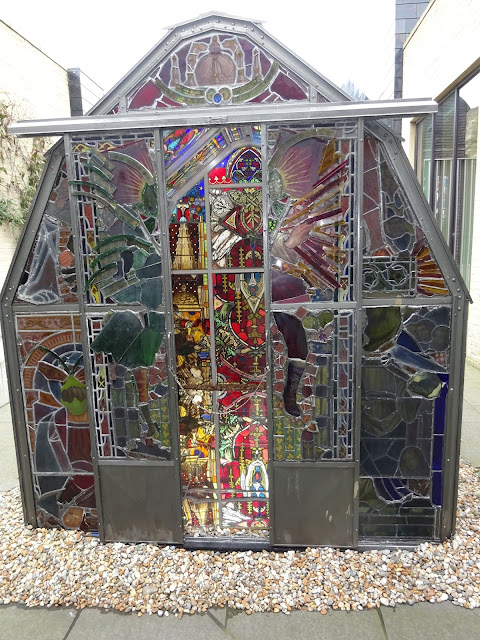 The Bratby exhibition was interesting as he really did capture the essence of his subjects, and we especially enjoyed his portraiture. His use of paint was extraordinary when you saw the thickness of it in close-up. There was an eclectic mix of subject matter, curated using many paintings from private collectors - he lived in Hastings for a while and so many local people bought his work.

John Piper's work always delights me and it was great to see a wide range including several abstracts alongside his ecclesiastical works. The best bit for me was his foliate head tapestry (this link shows a similar example although the one in this exhibition was nicer).

We thoroughly enjoyed our visit and I asked one of the staff if I could take a photo on the landing upstairs as it's a lovely feature, bringing the outside into the whole experience of your visit:

Well at that culture certainly gave us an appetite and so we headed off to The Neptune Cafe, just over the road, for fish and chips. 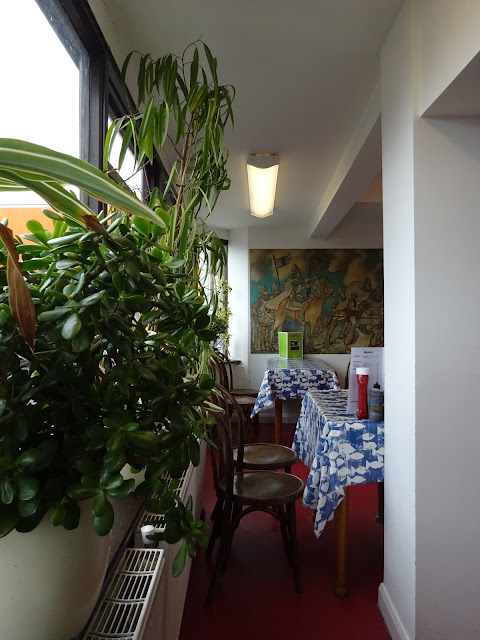 But you're a vegetarian Susie! Indeed I am but do not fear there was something for me there too. Whilst Mike tucked into his fish and chips, I had chips with mushy peas (which we shared) and curry sauce (of which we had to have our own portion or there would have been an undignified squabble!).  I have to confess that I didn't hold up much hope for the chips as last time we had them from a chip shop they were all soggy and horrid. But oh my goodness those chips were lovely: all golden and crispy and fresh. Plus I managed to get a pot of green tea and the lady served us with the biggest smile and even brought us some more hot water to top up our pots without us asking.

Feeling replete we headed back to the car and I took a few more shots to complete the trip. 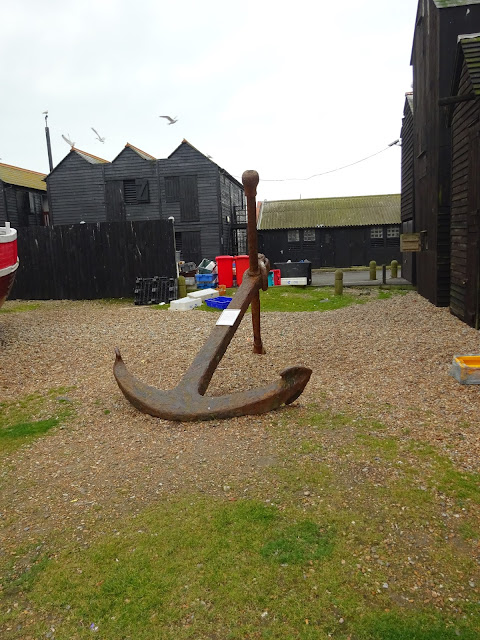 I've just had to rummage around for another couple of photos I took of this a while ago but forgot to share:

All in all that was a grand day out.
Posted by Susie Hewer at 9:57 AM

I have never been to Hastings but your trip around town was great! Thank you for sharing!
Julie

Wow Susie, didn't you pack a lot into your day out!!!
Great photo's, I enjoyed my visit with you.

All the best Jan