This is a tale of 2 days starting with the muddy bit.


It was Wednesday and it was raining, the traffic was horrendous as there had been many, many accidents on all the major motorways and I was not looking forward to my journey to Shorne Woods for the Book Day Challenge. That coupled with Traviss warning us that the course was MUDDY did not bode well at all.

As it turned out though my journey up to the outskirts of Maidstone was painless but that's when the trouble started, or rather the traffic came to a standstill. A section that should have taken 5 minutes took 40 minutes and I later found out it was because of accidents on 2 motorways accessed from the road I was on which had caused the traffic to back up for about 12 miles.

By the time I arrived the rain had stopped so that was good. I'd baked my usual banana cake and deposited it at the aid station where I spotted this fab cake Kirsty had baked: 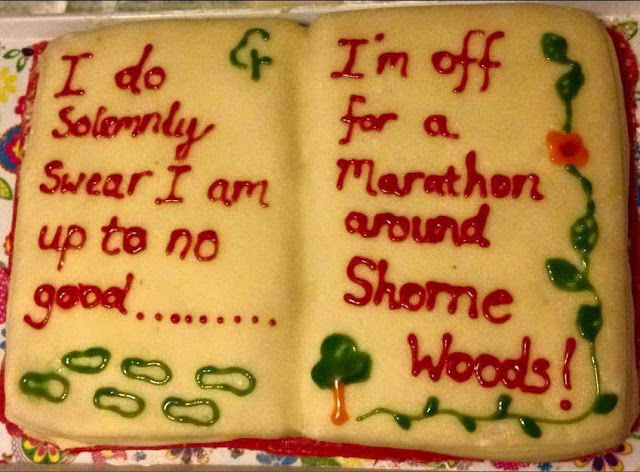 I took a few photos before we started and before I knew which route we were taking: 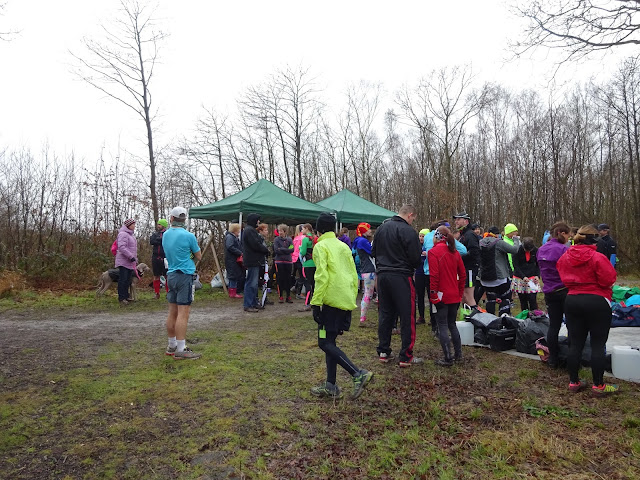 Immediately after the start we hit the mud on a downward section. You couldn't avoid it and so just had to get stuck in. I was very relieved to get through it in one piece as my legs were going in different directions and there was no way I could run down it properly for fear of falling an turning an ankle. The next section didn't look as bad until I saw a group of 4 lads trying to walk through it and one of them fell flat on his back and rolled down a slope covered in claggy mud. His mates laughed of course and he was OK but it did make me question if I'd manage to stay upright,

Having completed my first lap with large sections of walking I made a mental note to see how long I could stay upright and I thought that I'd probably make it up to about round 6 before I stopped lifting my feet properly and took a tumble. Ha! It was lap 2, just after the halfway point, when I tripped over a tree root hidden in the mud and fell onto my left hip and elbow. Amazingly I managed not to get covered in mud but it made me really cautious.

On lap 3 I realised I had slowed down even further for fear of falling and that's when I decided that I was going to do something I've never done before - pull out. It simply wasn't worth risking picking up an injury plus I had slowed down so much that it would have taken me about 7 hours to get round and I would hardly have run at all so there didn't seem any point. I wasn't alone as many people also stopped after just a few laps although lots of others completed marathon distance with a few brave/mad souls doing an extra lap to make it an ultra.

As it was a 'challenge' event you could claim your medal after just 1 lap, so at the end of lap 3 I bailed out and claimed my lovely medal.  It had taken me 2:20 to cover 9 miles!

After I'd made my mind up I felt a huge wave of relief and when I phoned Mike to let him know he said he was really relieved as he'd been very worried about me, bless him.

That left me a marathon/ultra short in my schedule for this half of the year and after much searching I found a LDWA event of 30 miles not too far away from home. Some of my running chums are taking part and the lovely Bryan has offered to keep me company as I'm anxious about the navigational aspect of it and don't want to get lost somewhere in deepest Kent!