Pottering, I love that word.  The Oxford English dictionary defines it as "to occupy oneself in a  desultory but pleasant way" but although there may not be a proper plan to my pottering I do have plenty of enthusiasm for it.

I've been re-potting and dividing some houseplants.  Some of them go outside in the shade for the summer break whilst others are repositioned in any space available on a window ledge.

I enjoyed taking photos of some of them from above:

During my pottering I remembered to take photos of some craft things.  In an act of sheer defiance against arthritis I took out a 1.5mm crochet hook and some fine cotton thread and set about this old pattern I found in my scrapbook of cuttings.  I had to use my magnifying glass (that hangs around my neck) and only did it in good light so although it took a long time I'm quite pleased with it and enjoyed the challenge although those picots around the edge caused a bit of bad language I can tell you!

It fits perfectly on one of our 3 tall, narrow window ledges where it's difficult to find just the right plant or ornament.

Next there's a bit of needlepoint which I haven't done for ages.  The Swallows come back and nest in our field shelters every year and I love watching their amazing aerobatic displays.  Seen here with Magnolia blossom.  I used a chart from a page of an old copy of Needlewoman magazine from the 1970s (I think) or early 1980s.  I already had enough crewel wool in my stash but had to buy the canvas.

I stretched and mounted it myself then got it framed with non-reflective glass although it does still reflect a bit as you can see on the chest of the swallow on the left.  Still, it's less reflective than ordinary glass.


Then there's Frida's Flowers from Jane Crowfoot which I started when it was released as a CAL but abandoned after a few instalments as that was when Mike became ill.  I'd only completed the 2 sets of plain white/beige hexagons.

I found the yarn and pattern in a bag when I was tidying and have started working on it again.  I've done 3 sets of flower hexagons.  I'm enjoying working on it now knowing that Mike is well again (touch wood etc etc). 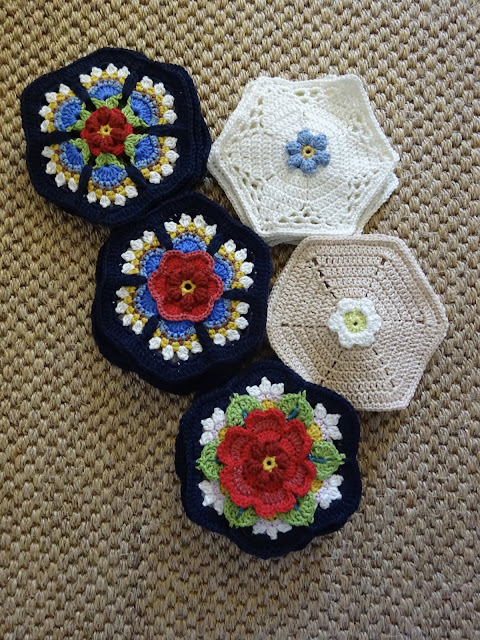 In the garden the soil is mostly rock hard as it's been so hot for ages so digging is out of the question so I'm just managing the weeds as best I can.  I do think the weeds are winning though as they are flowering and producing seed so quickly it's difficult to keep up with them!

There are lots of young birds about now as the Rooks, Jackdaws, Magpies, Sparrows and assorted Tits have all fledged so the garden is full of chatter and squawking.  I've been enjoying watching all the different creatures using our birdbath on the ground; it's a favourite of Blackbirds, Collared Doves, Woodpigeons, Green Woodpeckers, Rooks/Crows/Jackdaws, foxes & badgers): 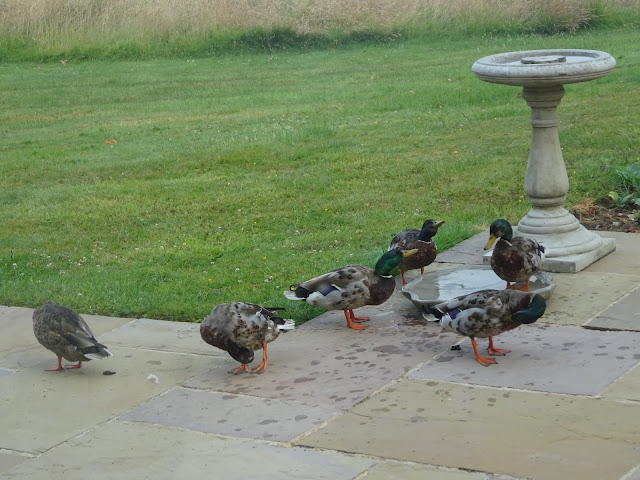 One evening recently I was leaning out of the bedroom window waiting to see the young badger (as you do!) who's been visiting when I heard a slurping noise.  I looked down and saw a large dog fox enjoying a drink there too.  I didn't take a photo as I didn't want to disturb him and spoil the moment.

I hoping the weather cools down a bit for the weekend as I've got a marathon on Sunday!
Posted by Susie Hewer at 1:02 PM