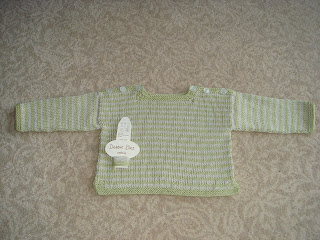 I wanted to knit a little jumper for my dentist's new baby boy as a thank you to him because he's sponsored my marathon running for the last 3 years. I chose this pattern from Simply Baby and ordered the yarn 4 weeks ago. 2 days after I placed the order I received 1 of the colours but not the other so I phoned to check when it would be in (even though their stock level showed as high on their website!) and was told it would be about a week. 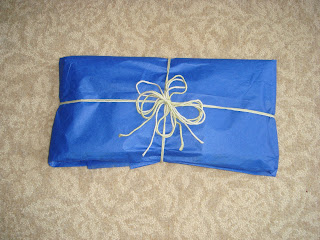 No worries I thought as my next appointment wasn't until today. At the beginning of last week I still hadn't received it so I phoned again to be told that it would be another 2 weeks. Grrrrrrrrrrrrr. I explained that I really needed it now as I had to knit it for this week. Thankfully they had another shade of green in stock so they despatched it and I received it on Friday. I didn't get much done at the weekend so I really had to motor a bit on Monday to get it done. Good job it was teeny-weeny!

The yarn I used was Debbie Bliss 'Cathay', a blend of cotton, silk and viscose and I really didn't like it at all, sorry Debbie. It was way too slippery and as with so many cottons it split like mad. Not one to add to my list of favourites.
Posted by Susie Hewer at 12:53 AM

Not receiving yarn in a timely manner is irritating, but at least, you finished it on time. It looks lovely. Hope the dentist visit went well!