What a FAB weekend!

It was always going to be exciting as it was my first time at our village Horticultural Society's Autumn Show. As our garden is still being remodelled and I haven't grown any veggies his year I concentrated on the potted plants and craft events. Although I've been passionate about gardening since I was a child (and indeed made a 2nd career in horticultural retailing) I have never joined a gardening society before so it was a new experience. 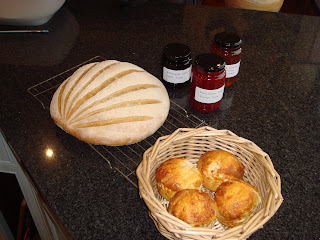 So Saturday morning, which is usually spent running, was spent baking bread, cheese scones, preparing jam etc. I had to be up with the lark to get the bread on the go as we had to stage our displays between 9am and 11am so there wasn't much time.

There was so much to take and Mike helped me with it. I entered these classes - Jam, Jelly, Marmalade, Bread, Knitting (Autumn Rose), Other crafts (my willow basket), potted plant grown for foliage and potted plant grown for flowers. We set them all out just in time for the judges to do their judging then it was back home to relax for a while - well, Mike did but I went for a run!

In the afternoon we went back to see how I'd got on. I only expected to get any recognition for Autumn Rose as it does look rather good, but as soon as we walked through the doors people started congratulating me. As we didn't know what I'd won we didn't know what to expect. Well, I got 3 x 1st place (Jam, Marmalade & Bread), 2 x 2nd place (Knitting & Flowering plant) and 2 x 3rd place (Foliage plant and willow basket). Crikey! That was unexpected but rather nice. We treated ourselves with a cup of tea and a chunk of cake to celebrate. Ordinarily I would have a few glasses of wine but I'm trying to abstain 'cos long distance running and alcohol don't go well together and I had a long run to do on Sunday. 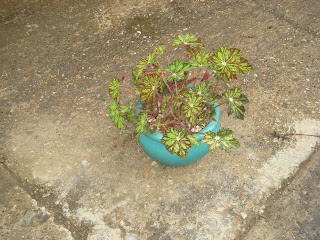 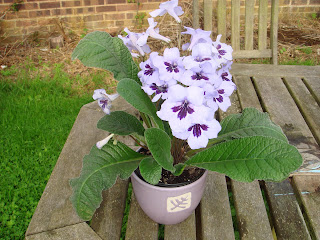 This Streptocarpus (which has lost a lot of flowers since it went on it's outing!) won 2nd place. It was a wonderful plant that won and I wish I'd taken a photo of it.


Sunday morning I bounced out for my run with a real spring in my step. I did think about the saying 'pride comes before a fall' so I was waiting to fall flat on my bum but thankfully I remained upright! With that out of the way we went off for an adventure in and around Hastings and St Leonards on Sea where there were several artists' studios open to the public. We had a good mooch round and it's always good to see the variety of work that people are producing (painting, ceramics, ironwork, photos, screen printing etc etc).

It was a most enjoyable day and we had our lunch in a nice little cafe along the seafront. Of course we had to go and say hello to the sea. Usually I would kick my shoes off and have a paddle with Mike walking along the edge like an anxious parent, but it's a pebble beach there and so not as inviting. 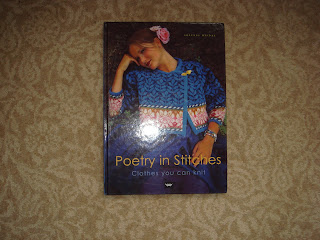 We always have a look around secondhand book shops wherever we go and have come away with some great finds over the years. Today was no exception. Mike didn't find anything of interest but I most certainly did. I always check out the craft and gardening/plants/wildlife sections but when I asked the proprietor if he had any knitting books he said there were very few so I wasn't expecting anything exciting....................until I spotted this little gem 'Poetry in Stitches', by Solveig Hisdal. It was the cover that caught my eye - lovely colours and a modern shape to the garment. As I flicked through the book I knew I'd found a treasure and had to have it - £8 seemed like a reasonable price as it is in good condition.

When we got home I checked it out on-line to see if I could find out more about the designer. That's when I realised the book is much sought after as it is out of print. On checking Amazon I became even more excited!
Posted by Susie Hewer at 7:44 AM

Hurrah for you! That is just great news. I'm so impressed with all your domestic prize winnings. Is there a secret to the bread that you're willing to share??

Thanks Carol. I don't have a secret but I do think that the kneading makes a tremendous difference to the texture. I always knead for 10 minutes. Other than that it was just a very basic recipe using 500g of white bread flour. The rules said that it had to be hand-shaped so I just made a ball, squashed it then cut the slashes.

Holy crap, lady!! What a find! That's akin to my Starmore fantasy where I walk into a dark used bookstore and find Fair Isle Knitting, Aran Knitting, The Scottish Collection, and The Children's Collection for $5 each.

You rock! Congratulations on all your winnings and the great find. Very impressive!