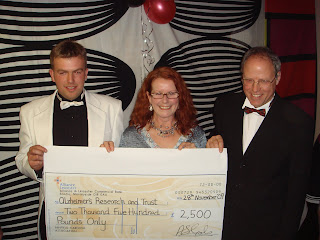 Mike and I had a lovely evening yesterday as guests at the Ninfield Gala, an event to raise money for the village and for charities. The village holds a Carnival each summer and this year had decided to split the proceeds between 2 Alzheimer's charities - the Alzheimer's Research Trust who I support and the Alzheimer's Society.

They had contacted the Alzheimer's Research Trust and asked if anyone could come along to receive the cheque on their behalf and as I live quite nearby I was happy to attend. The 2 ladies from the Alzheimer's Society were actual employees of the charity as opposed to just being an active fund-raiser as I am.

The hospitality of the villagers was wonderful and we were treated to a lovely evening including a tremendous performance from the Brighton Revue Company who wowed us with their witty sketches and singing.

This photo was taken at the start of the evening and I hope it makes it into the local paper to get some publicity for the Alzheimer's Research Trust. When the real presentation was made I was completely overwhelmed by everyone's generosity and had to fight back the tears. You'd think that after 4 years of fund-raising I'd have more control but I often find that acts of kindness intensify the pain I feel about how mum suffered.

After the presentation of the cheques (where there was some confusion over the names of the charities - the Alzheimer's Society is the massive charity with loads of employees and branches all over the place whereas the Alzheimer's Research Trust is much smaller and completely focussed on research) there was a raffle.

Afterwards, 2 people very generously offered back their prizes to be auctioned for charity and when the winning bids had been secured the auctioneer asked which charity the money should go to. They said "Alzheimer's" and he said "Right, the money will go to the Alzheimer's Society then". I don't think he realised that there were actually 2 charities and I'm sure he didn't mean to exclude the Alzheimer's Research Trust but I felt a bit crest-fallen. The lady from the Alzheimer's Society must have spotted my disappointment and said "don't worry, we'll split it", which was kind.

I've often found that it's the so-called 'research' charities that have to try extra hard to raise funds because searching for a cure doesn't seem to get as much publicity as palliative care. I hope that I can help to change that with my fund-raising as I firmly believe that finding a way to prevent or control the disease is the way forward.
Posted by Susie Hewer at 3:42 AM