No, not the scrummy bread, brioche stitch!  I've decided to take myself out of my comfort zone and try lots of new things so brioche stitch is the start of my adventure.  I'm using instructions from Nancy Marchant and she is very thorough and easy to understand.  This is my first little sampler and I really enjoyed making it.

The knitting is so warm that Mike has requested a scarf already.  I think I'll need to concentrate really hard on the pattern he's chosen as it has lots of brioche increases and decreases but it will be a good challenge to start the new year.

He's chosen a lovely deep teal colour of Artesano alpaca chunky which will pick out a colour in his tweedy gloves (yet to be made from yarn in my stash) and his tweedy cap so he's going to be very co-ordinated!


Speaking of bread, here are the loaves I made earlier today to freeze for the next week.  Just plain white loaves, good for sandwiches and for toasting.  Below them is my leaven, bubbling away nicely, which I'll be using tomorrow to make a sourdough bread to go with soup.  It really is soup weather at the moment; all dark, rainy, dreary and very windy.

Which brings me round to the strange skies we've had in the last day or so.  This was taken at first light; a pretty peachy glow amidst grey clouds. 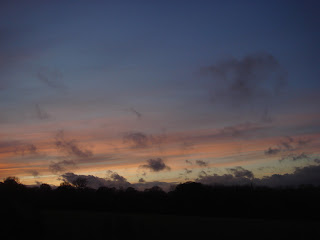 About 15 minutes later it all changed - the clouds came lower and filled the valley and everywhere took on an odd glow.  I don't seem to have captured it very well though. 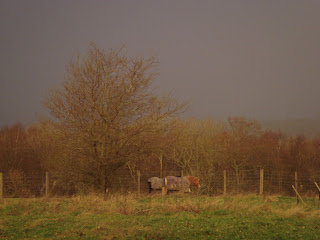 As I watched the horses this beautiful fox cut across.  He was a fine specimen with a lovely bushy tail. 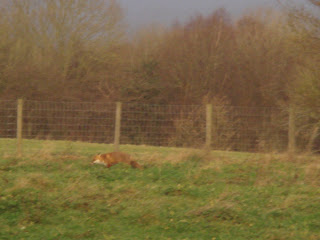 I had intended to decorate my pottery swan with shells.  Well I am easily distracted and so that changed completely when I found some handmade paper in a shop when we went into Hastings just before Christmas.  We bought 2 sheets so Mike had a painting project and I had my own piece to play with.  Mike did his painting on part of his piece and didn't like the texture it gave him so gave me the remainder.

Excellent; more for me to play with!  At first I thought I might draw on it and so I searched through my sketchbook to see if I had any doodles that caught my eye.  As always there were lots of heart motifs that drew my attention, but also many different birds.  I love folk art and am always drawn to this sort of image. 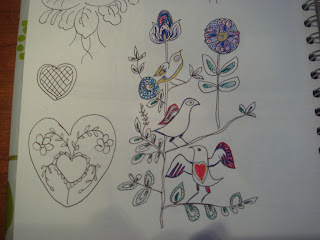 As I searched I heard a robin singing outside and that was it, I started doodling birds singing.  Then I drew a heart around one and I found my theme - "with a song in my heart" 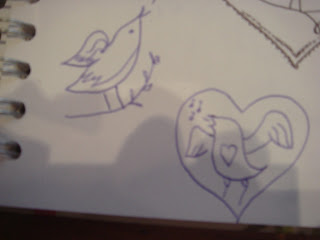 I couldn't find just the right image until I remembered a traycloth that mum had embroidered when I was a child.  I rummaged around until I found it but he was a bit to fancy for what I had in mind so I played around with it until it was just right.  The original had a much fancier tail and lots of decoration on his body.  It came from a magazine called 'Needlewoman and Needlecraft' which was a wonderful publication from the 1960s and 70s.

I had thought that the paper would just be a mount for the finished embroidery.  That was, until I discovered that I could embroider it direct onto the paper.  I spent ages trying out different cottons/silks and stitches.

Then it was time to cut out the heart shape from the paper and start embroidering. 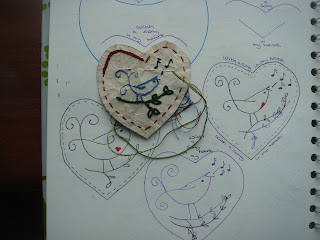 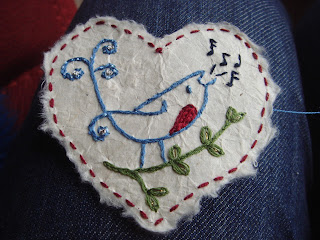 I had a plain little round wooden frame that was just the right size.  I mounted the heart on a background of dark blue pastel paper then all I had to do was decorate the frame.

First, I painted different layers of paint onto the frame.  I tried positioning the lettering in many different places and finally settled upon the inner circle of them frame itself rather than around the heart.  I used pen and ink to write it. 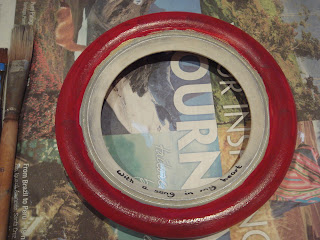 Then I distressed the paintwork and added some highlights here and there. 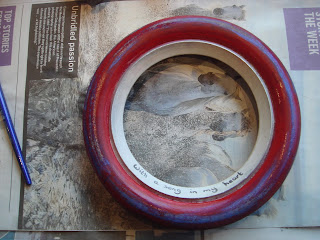 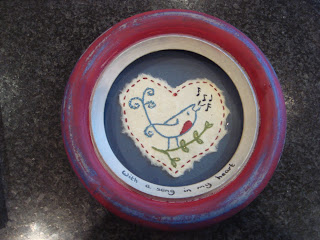 But it still needed a little something extra.  I considered adding some folk art motifs around the edge but then it occurred to me that the music should come out of the heart and settle on the frame.

So here he is, singing his little heart out and brightening a little space between 2 of Mike's paintings in the hallway. 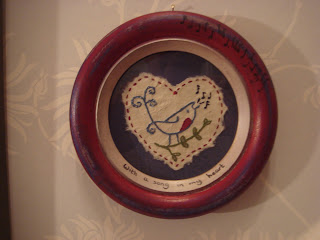