Each time I check my stats more and more people have viewed my post about my afghan tension (last time I looked it was over 350).  My shame has gone global!

Running wise I'm right back into my latest training phase and it's tough as I really need to work hard to achieve my fund-raising goals for 2013.  There's been so much happening around Dementia and Alzheimer's this year that I will have to do a summary soon.  It feels that at long last we are getting the message across that research is essential.

There will be lots of photos of knitting and crochet soon, hopefully, but for now I'll just share a few photos of beautiful things from the wilder parts of the garden.  I've also taken on a project with our local village church which I can share next week - oh my goodness I need to get a move on!

I was just wandering around the other day and these things caught my eye:


Teasels grown for nectar and seeds (finches love the seeds in winter).  I dry a few to use in winter arrangements indoors:


Here are some of the many seedheads I saved for winter arrangements.  The beautiful rust-coloured ones are Dock and Sorrel.  The large heads are Allium Christophii and the more airy ones are Eupatorium, both of which I often spray silver or gold for Christmas.

In the orchard there are some beautiful lichens and mosses on the apple and pear trees: 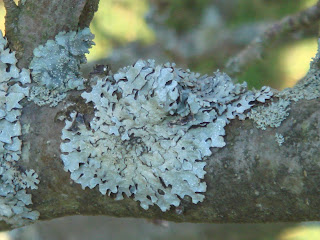 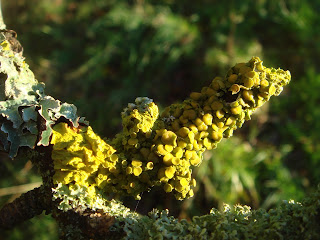 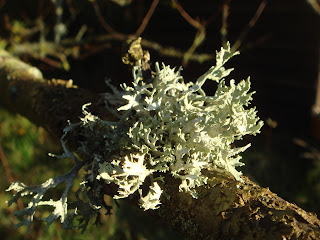 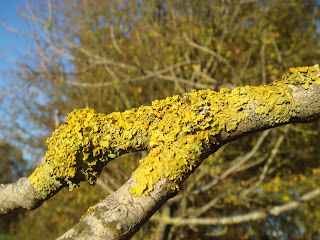 Yesterday we were treated to a glorious sunrise.

The moon was still up (dirty stop-out!).

The day ended as it began with a beautiful display of pinky-red.

On the pottery front I have only one completed thing to show even though the course has finished!  The remaining items are all waiting to be fired with their glaze on.  During the first firing someone's pot exploded in the kiln and broke into pieces and showering them on the other items in the kiln.  Thankfully my owl and other things were OK but I felt so sorry for the lady whose pot was ruined as she'd worked really hard on it.

So here's the one finished thing I can show but I can't get the first 3 photos to turn the right way round.

At the end of the first lesson we had an hour in which to just play with the clay so I rolled a piece out flat and cut an oval shape.  Then I proceeded to decorate it.  Now each time I've done pottery I've always used hearts, holes and flowers as a theme (analyse that!), either for shape or decoration, and so it was no surprise that is what I chose to do.

I also have a habit of cutting out shapes and then sticking them back on, hence the 6 raised hearts around the central motif.  In the top left of this photo you can just make out some more hearts which I've glazed and stick onto wire and added them to potted plants for a bit of fun.

In this next photo I've applied different coloured underglazes which I've worked into the cut surfaces.  Don't worry, it all makes sense in the next photo.

Then I rubbed off all the glaze on the surface leaving behind just a hint of each colour.  Then I glazed it with a transparent outer glaze and it was ready to be fired again.

Here it is all ready to be strung and hung.  The flower at the top was going to be its hanger but it's slightly off-centre so I'll attach a clip onto the back.  The 3 hearts below will be strung underneath but I'm not sure what I'll use yet - I'm thinking of crocheting some wire and encasing them in it but that will have to wait until Christmas knitting and crochet projects are finished.  I have just the right spot for it in the kitchen (which houses several other pottery projects).


I wrote here about the silly habit that the wild ducks have of drinking water out of strange places but until now I hadn't managed to catch them doing it.

Speaking of silliness, here are my new socks! 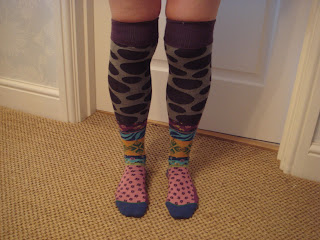 I like your story en wat an nature ,THE hart is beautifull Gr. Marloeskreatief

Susie, I LOVE that heart with a deep and abiding love. I have never been drawn to making pottery (though I love pottery itself) until TODAY! You've inspired me. I shall seek out a class in the New Year.

Sorry about your shame but great that you used it for good, to educate others!