Now that was exciting!

When I ran my first London marathon back in 2005 I took one of their Gold Bond places to run the London marathon because I didn't get in via the ballot. These are places that charities can buy and then issue to people who want to raise money for them by pledging to raise a specified amount. Back then it was a minimum of £1200 (now it's £1800) and I was very worried that I wouldn't be able to manage it because I'd been a full-time carer for mum for so long that I hadn't got the usual circle of work colleagues to pester. It's interesting to note that then they had great difficulty in giving away these precious places and it was me and Harriet, an employee of ARUK who took up the 2 places whereas nowadays people are queuing to get them (which is excellent!) and they are always over-subscribed even though they have many more places available.

This is what I looked like at mile 18 where I stopped for a chat with supporters from the Runner's World forum. The reason I'm leaning forward is that someone made me laugh which in turn made me cough so I needed a drink of water! Sorry it's so teeny-weeny but I can't make it any bigger as it was taken on someone's phone and the resolution is poor.

It was so hot that day and I got really sunburnt but managed to raise £3241.58 for Alzheimer's Research UK (although they were known as AR Trust back then) which was way above my expectations. That is exactly what I was asked to speak about at the Supporters' Day.

My day started bright and early, 4:30am actually, as I had to do a run as part of my 5 month running streak. Then it was time to get washed and dressed. The sunrise was really pretty. 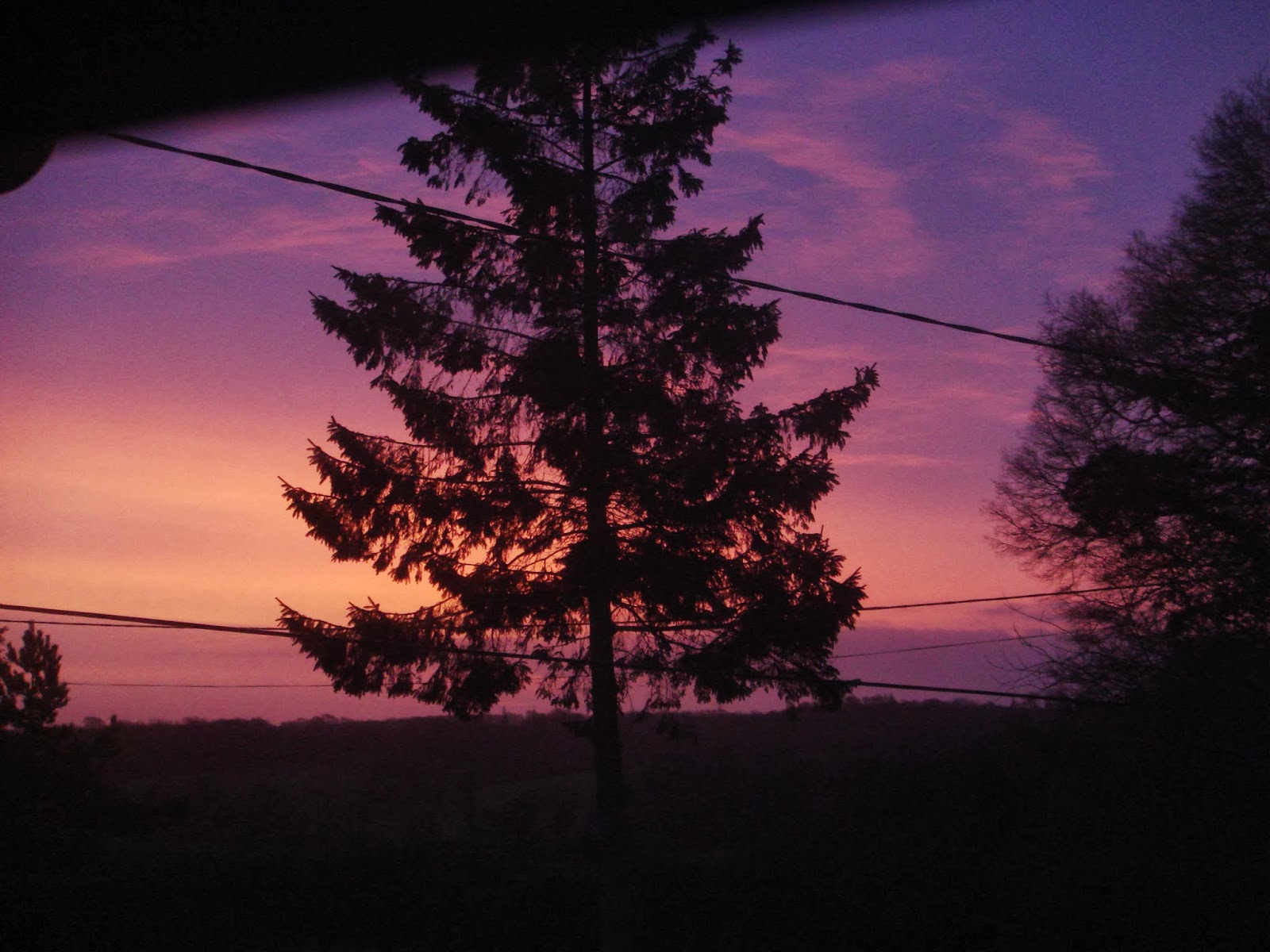 As usual I'll start with my journey into London. I wasn't expecting any excitement first thing but as I was crossing the footbridge to the small rural station I spotted lots of yellow and black tape everywhere, glass on the ground and a Police presence. 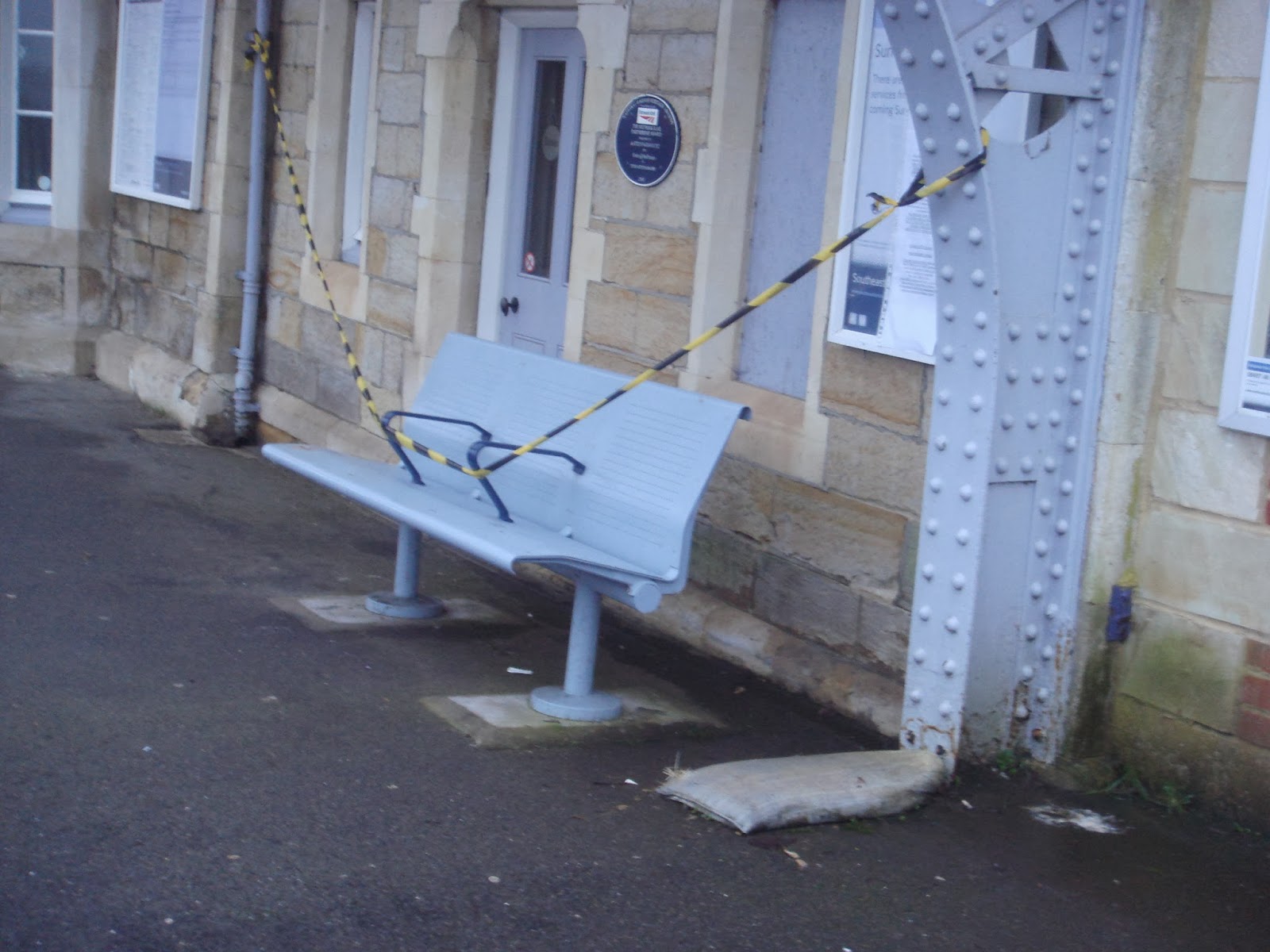 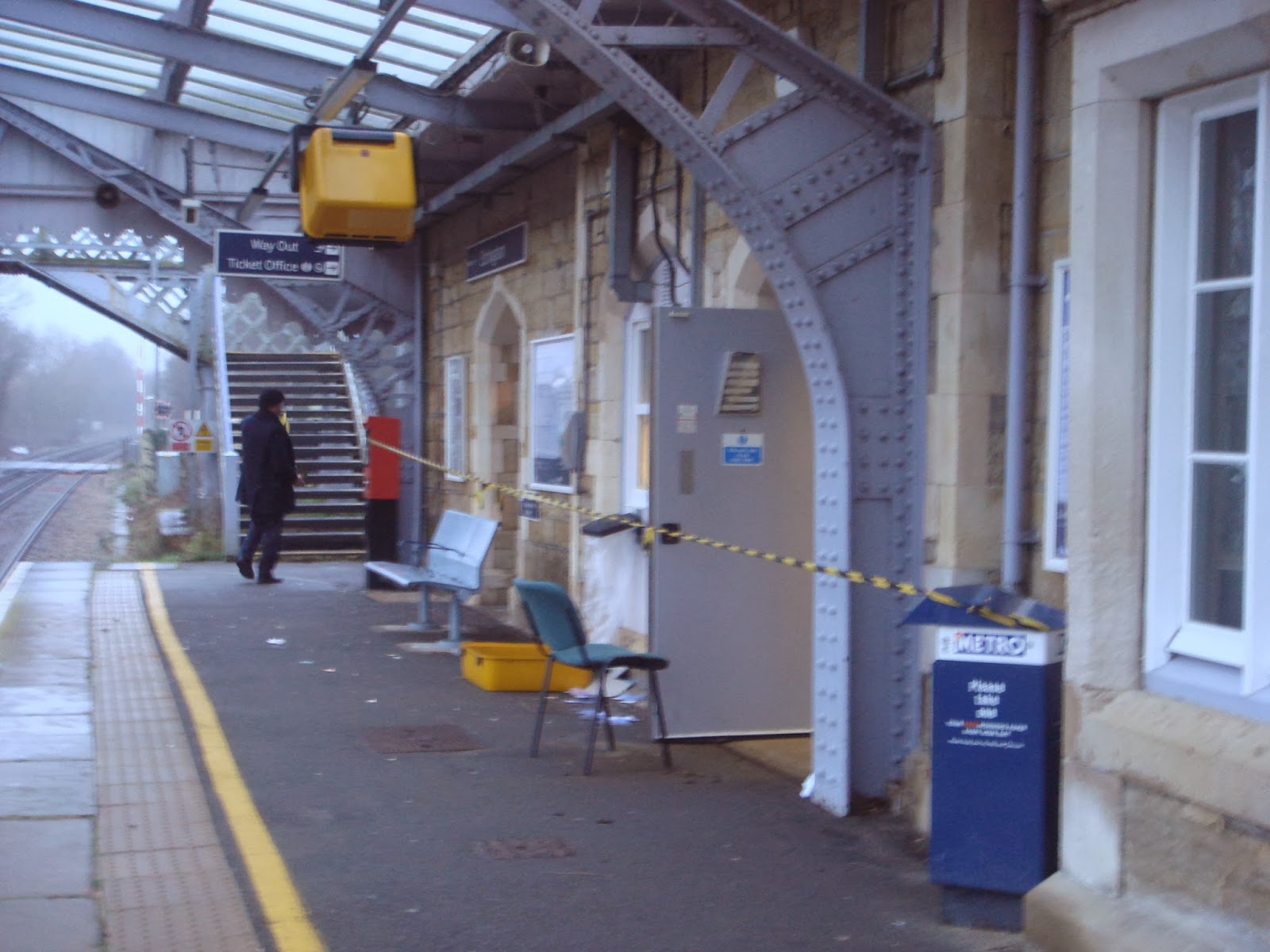 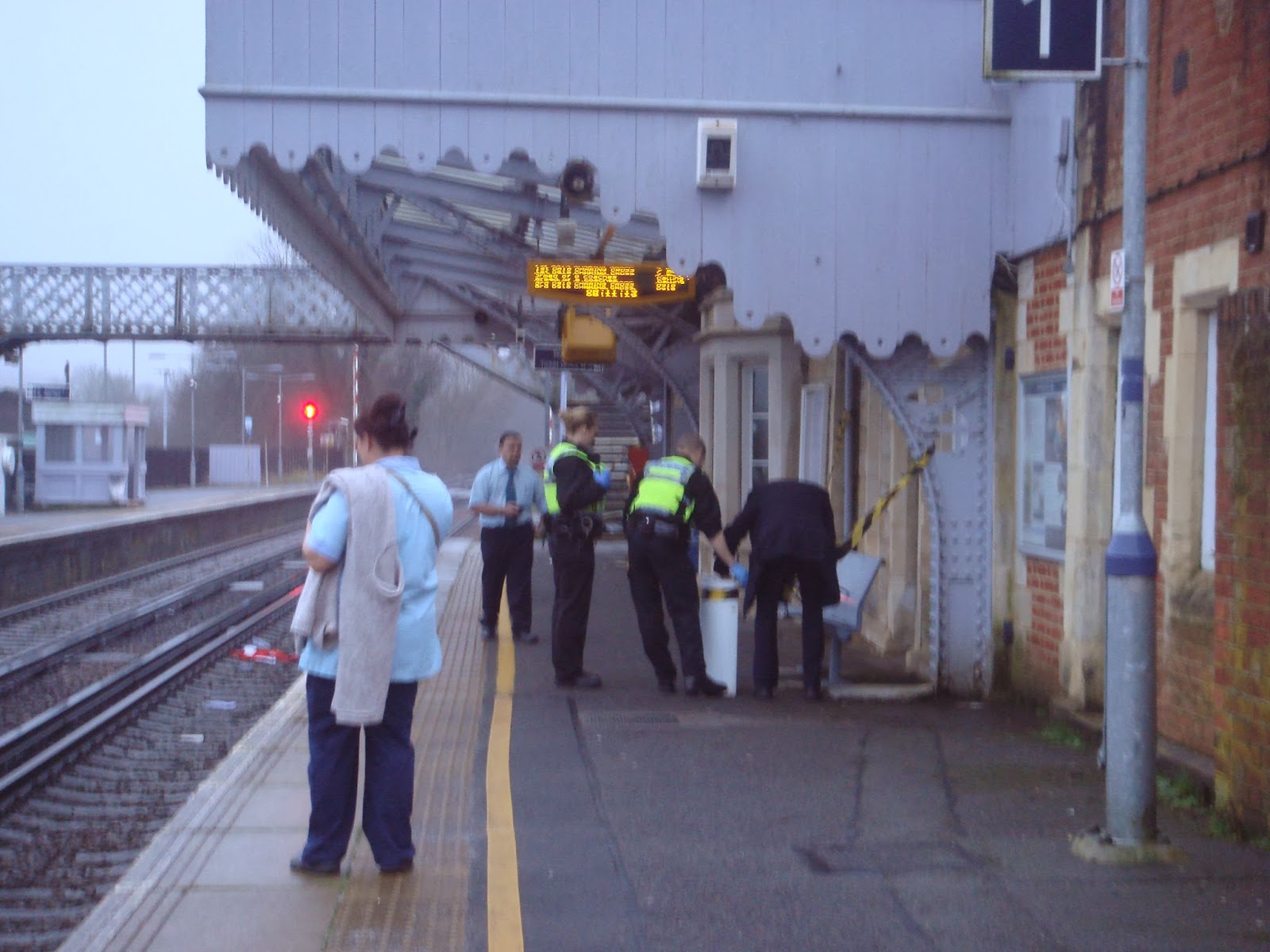 The man from the ticket office was flustering around and he was hilarious. He's a larger than life character and camp as can be and when I asked him what had happened he exclaimed "my orifice has been entered!!!" which had me howling with laughter.

The Policeman told me he suspected it was drunks on their way home the night before as they'd tried to smash windows using whatever came to hand and there was blood everywhere so they must have cut themselves on the broken glass. He said that if they'd been drug addicts they wouldn't have left any forensic evidence lying around.

Then an announcement came over the tannoy telling me that due to a landslip further along the line the train would be delayed by 7 minutes. As I type this I have just heard that there's been another landslip further along our line which means our usual station is not in operation so it's just as well I don't need to get into London this week!

I'd allowed plenty of time for my journey and so was able to sneak in a coffee and croissant at the cafe in Foyles bookshop which was just over the road from the venue. This bookshop has been revamped recently as it was tired and neglected for many years - in the craft section, which is still the best in London IMHO, they used to have to put buckets down to catch the rain from the leaking roof and I often used to get bargain books that had been damaged by water ingress!

At 10:30 I headed over the road to the basement of the Phoenix Artists Club to meet up with Viv Hill, a fellow Champion, and the team from ARUK. The chef had laid on a wonderful spread for us and I thanked him afterwards as it was the most imaginative vegetarian-friendly buffet I've had in a long time and his homemade biscuits were mouth-wateringly yummy.

To start with there was fun session where we each introduced the person sitting next to us. Everyone had a connection with dementia and their very personal story to tell. So sad.

The first speaker was Lizzie Glennon, a researcher who I've met before. She did an excellent slide presentation explaining how the amyloid plaques and tau tangles of dementia take over the brain. When we were chatting afterwards she said she'd really loved how I used crochet snowflakes back in 2012 to explain how the brain is changed in dementia.

I had been asked to give a 10 minute talk about my first marathon for ARUK, my reasons for doing it and how I went about fund-raising. I followed another supporter who spoke about caring for his mother and I found myself choking up when I did my own talk as his experiences brought some of my darker memories to the fore. I normally manage to keep the really powerful memories buried deep in my mind but sometimes they just pop up unexpectedly and I find myself unable to speak so have to take a moment to compose myself. One of the supporters said that he got quite teary when he saw it happen to me and said he was about 3 seconds away from coming to give me a hug, bless him.

After that, Viv (pictured on my right below) and I did a double act with our Top Ten Fund-Raising Tips. We're currently making a blog post out of them for the ARUK Dementia blog and I'll put a link on here when it goes live as it might be useful for any first-time fund-raisers/marathoners.

Then everyone was split into groups to come up with their own suggestions for fund-raising. There were some great ideas and one of my favourites came from Emma, who creates cells to be used in research, who has been asking people for a donation to name a cell after them - what a brilliant idea. Just imagine if a cell named Susie helped find a cure!

Many of the people who attended were running their first ever marathon and it was wonderful to share their excitement and help calm their nerves. We all came way feeling inspired and very positive and I hope I get to see some of those lovely people on marathon day. Good luck everyone and just enjoy the day. 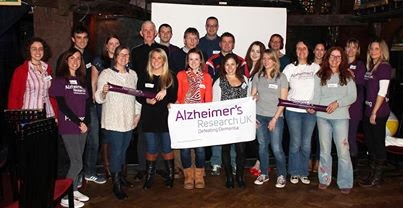 It was a friend's 80th birthday recently and I'd decided to make her a beautiful shawl, using luxury yarn, as a gift as I knew she'd appreciate it as she is a keen craftswoman. The pattern I'd chosen was a long swirly shape that lots of people seemed to love over on Ravelry. However, when I'd completed it I really didn't like the construction at all and thought that although it was an interesting knit it was impossible to make it hang nicely when worn. The knitting has now been undone and the yarn washed and wound into hanks to dry. I won't name the pattern as I don't want to upset anyone but I certainly wasn't going to give it as a gift to my friend! Sometimes the most popular patterns, often those that are free, aren't the best.

So the day before her birthday I had a bit of a panic and decided to knit her a simple heart and fill it with lavender and then join with lots of other people to buy her a painting holiday in Italy.

I used a pattern I've used many times before from an old copy of Interweave Knits and it's great fun to construct. I wanted a patchwork effect so rooted out this ball of multi-coloured sock yarn. I cut lengths of each colour and started knitting. 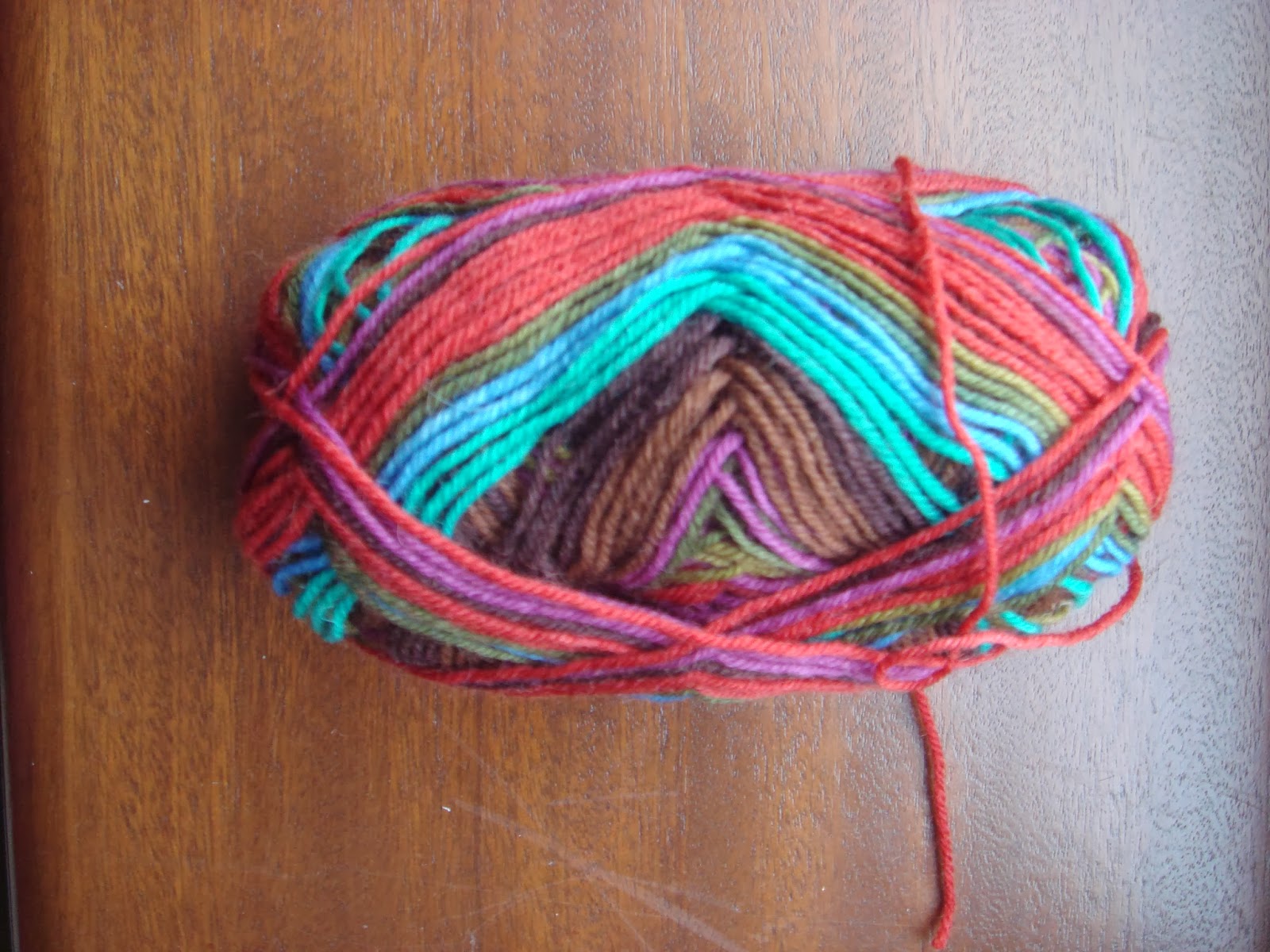 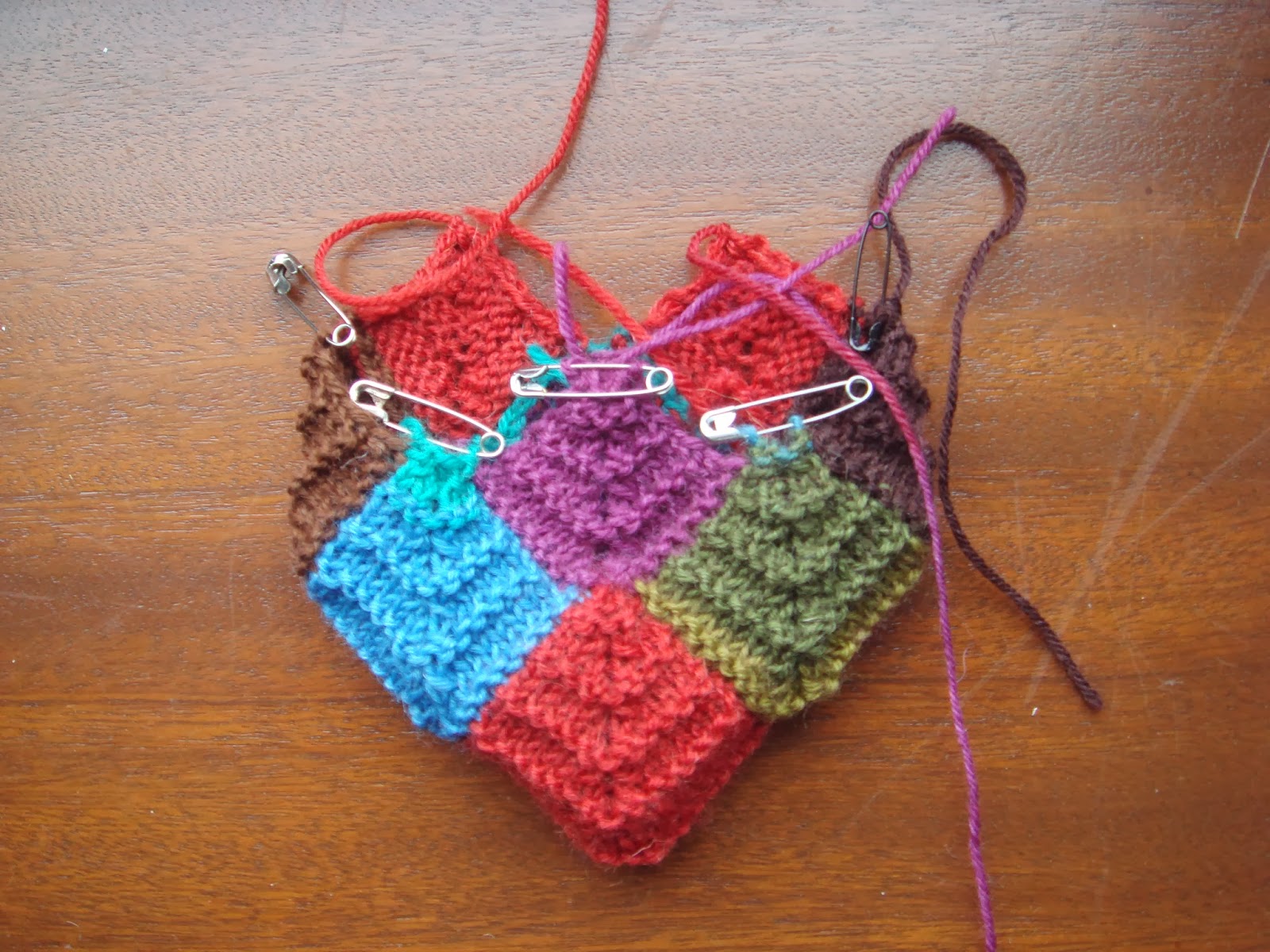 I crocheted a chain to hang it and left it to dangle from the door handle for a while to stop it curling.  She loved it and had it hanging from her wrist the whole evening at her party.

In making it I realised that there is a useful technique used at the edge of each square which makes it easy to pick up stitches for the next one. I think I might write a short tutorial to demonstrate it when I get a moment as it's a useful constructional method to use for something like a button band.