Continuing my day in London

When I arrived at the Barbican centre, with the help of a friendly delivery man and a traffic warden (I had 2 sets of instructions, neither of which were accurate!), I headed into the foyer and looked for the lifts as I knew I needed to go to the 4th floor. You'd have thought they would be easy to find, with clear signage, but apparently I'd entered the building by the one entrance where there weren't any signs. So I asked a friendly man, who was very unfriendly actually, where they were and made my way up to the reception area.

Morning speakers had been asked to be at the venue for 8:30am for a briefing which was why I'd left home at silly o'clock. There was no-one else there so I wandered off to the reception area and grabbed a coffee and choccy biscuit, which made everything seem better. The reception was held in the massive greenhouse area, adjacent to which is a sort of atrium full of enormous exotic plants: 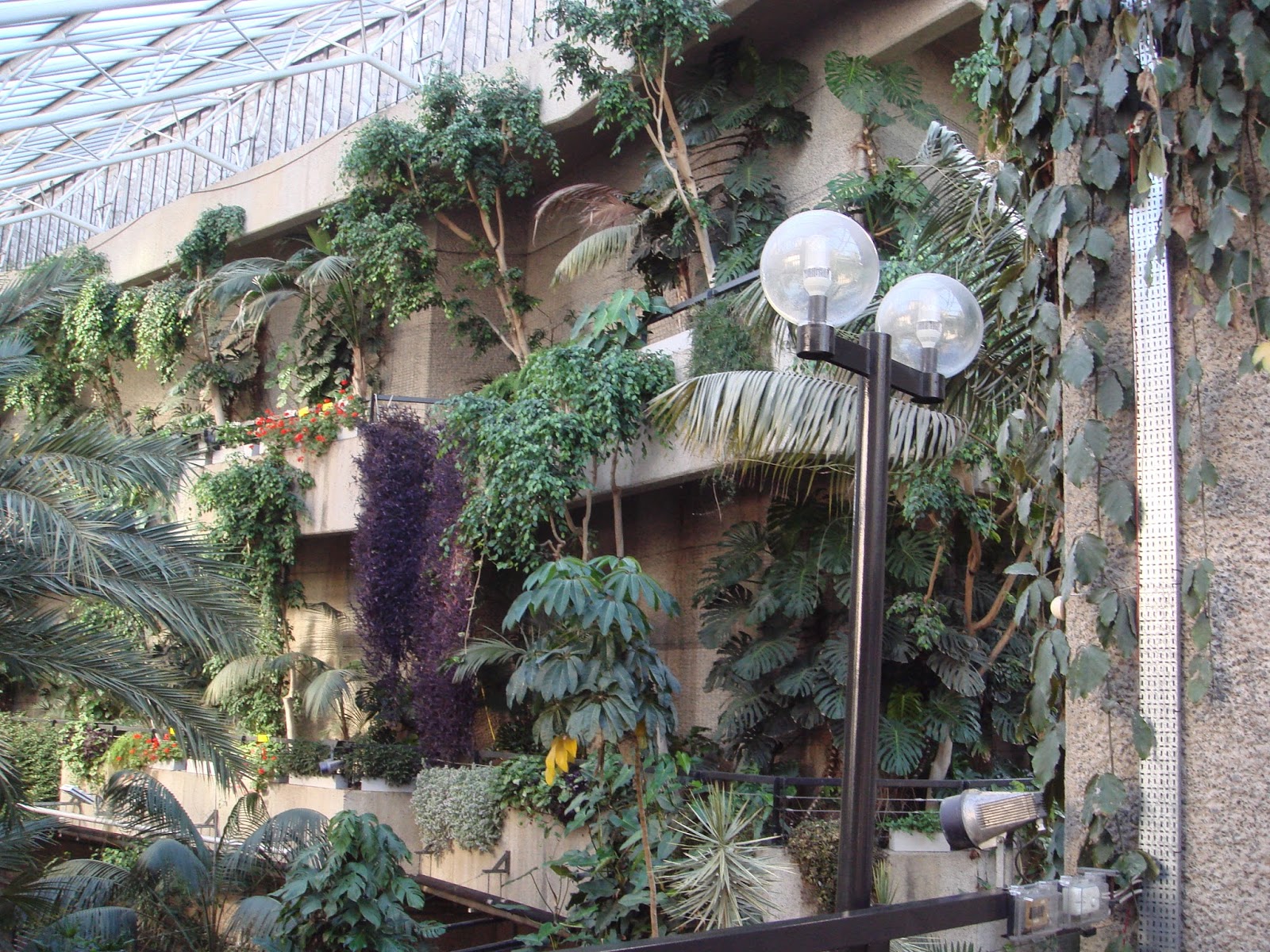 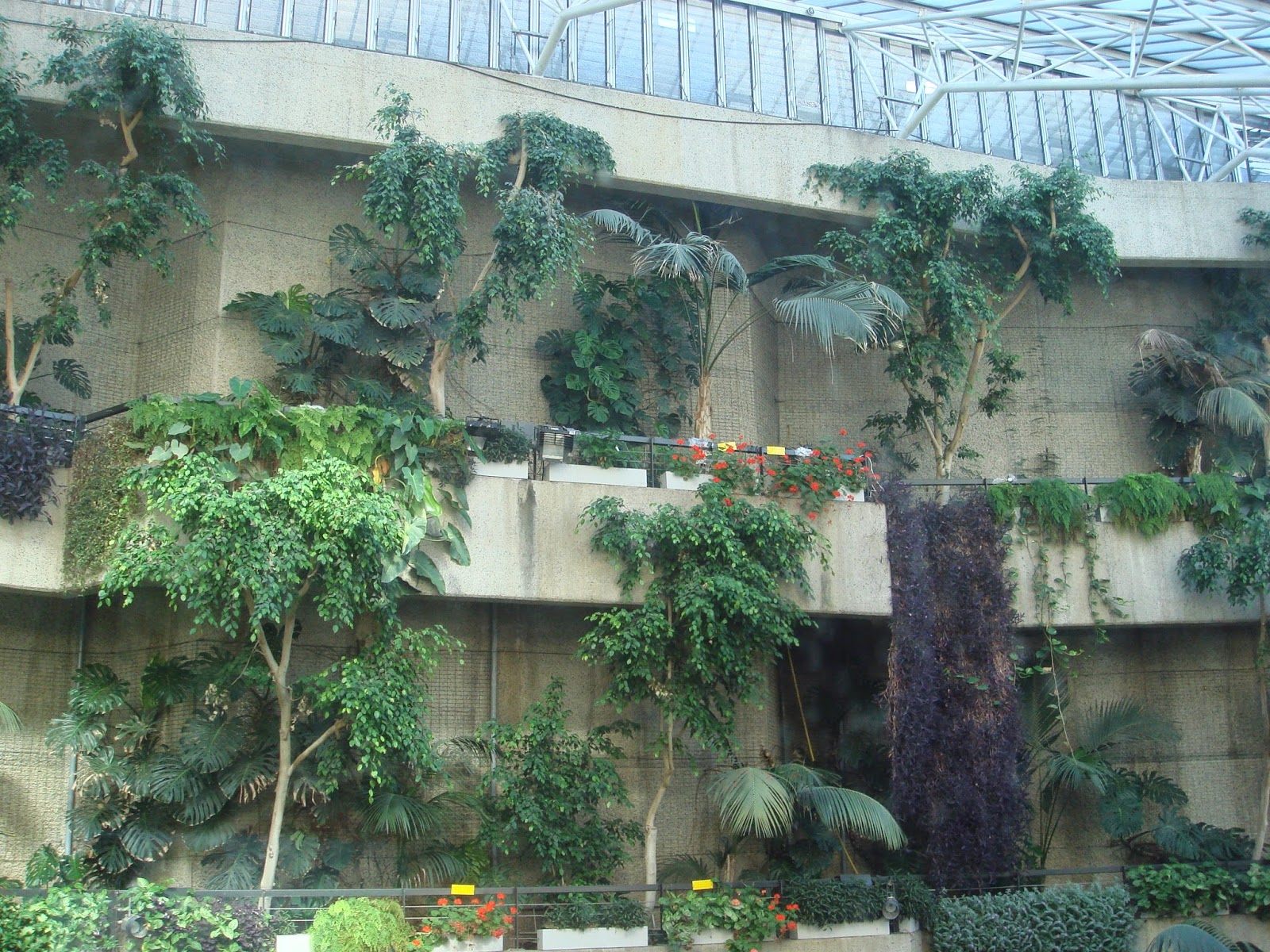 To the left of the photo below you can see lots of windows and there is a walkway along there with our conference room just off it. 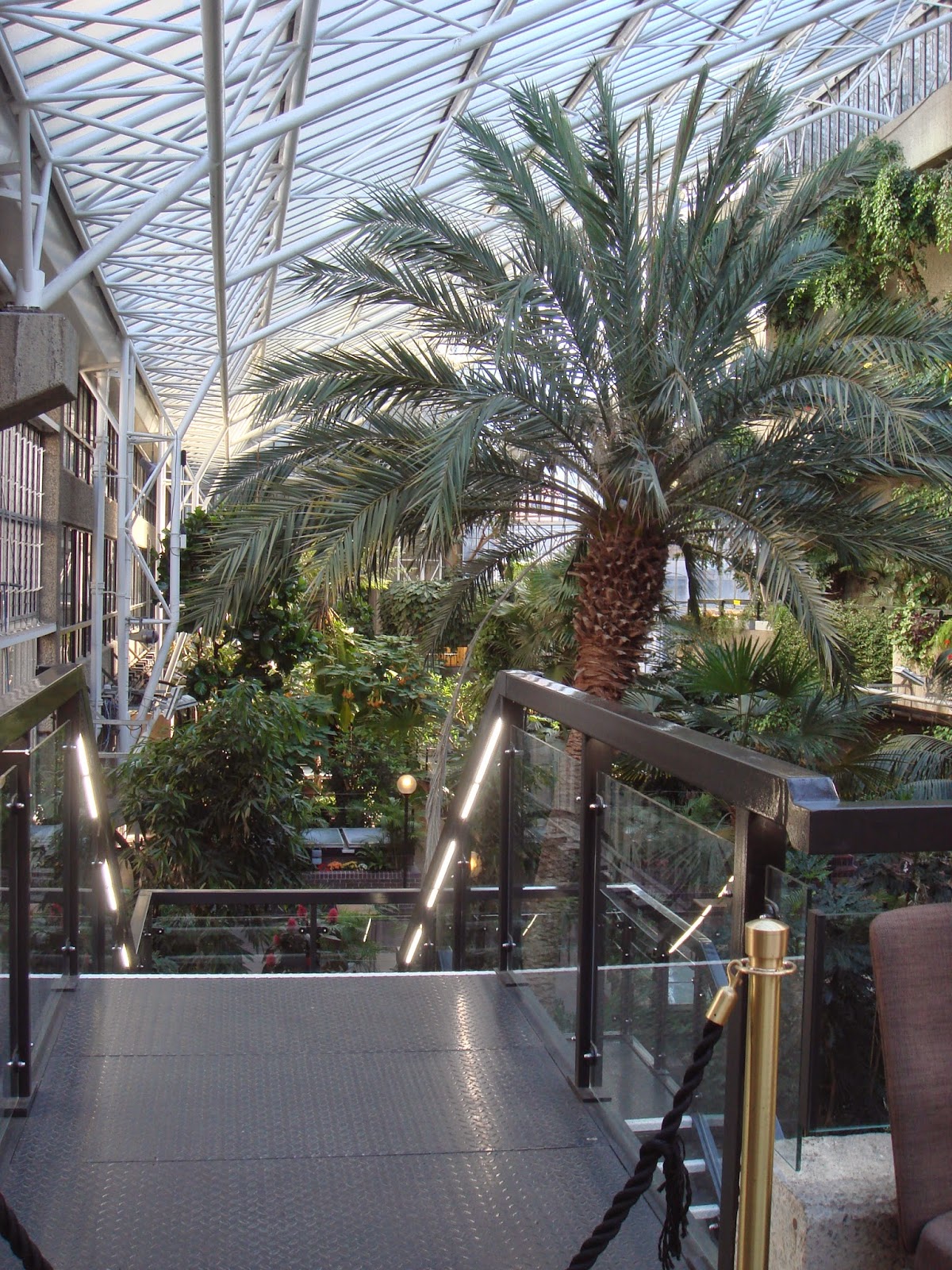 Refreshed by a dose of caffeine and chocolate I wandered off to find our room where I found Alexis, the organiser, and his technician busy setting things up. 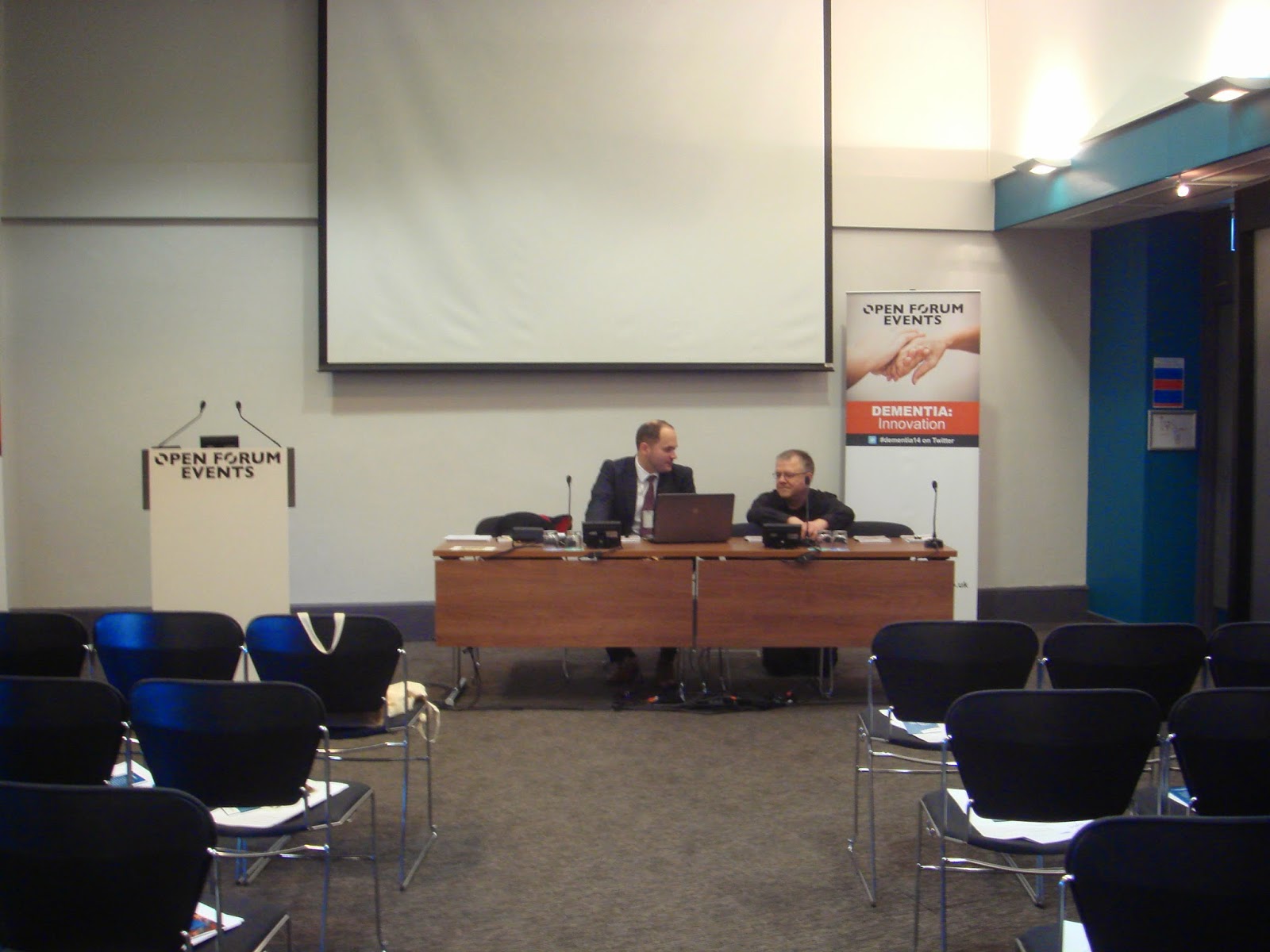 I think there were around 120 attendees from all sorts of different areas involved in dementia care. 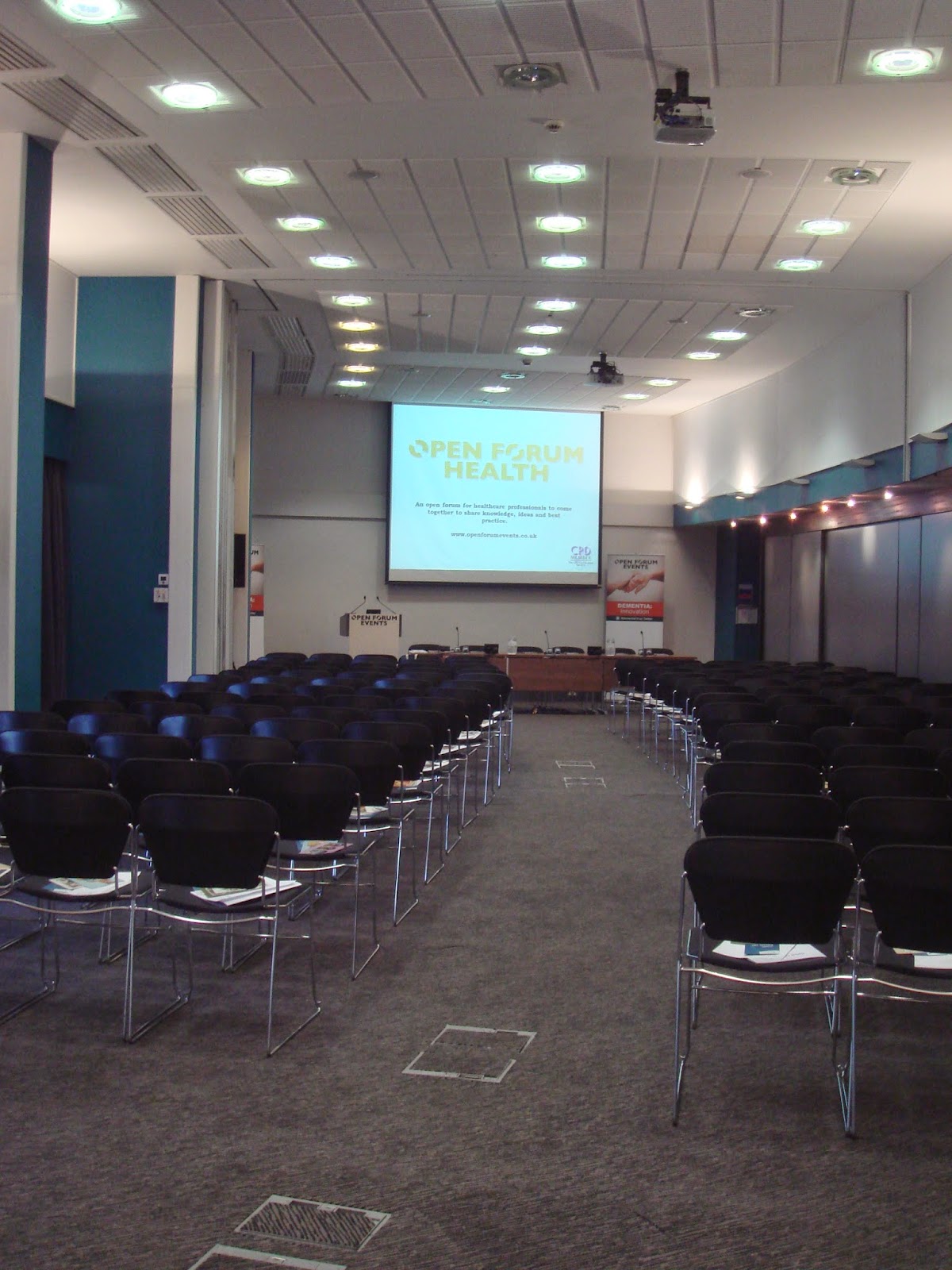 I'd taken my trusty ARUK dongle along which holds my slides and photos so I just had to check it was loaded in OK and then I could trot off for a wander and to chat with people.

This is the view on one side of the building. There are lots of flats in the complex and they are enormously expensive as it's what is referred to as a 'desirable address'! 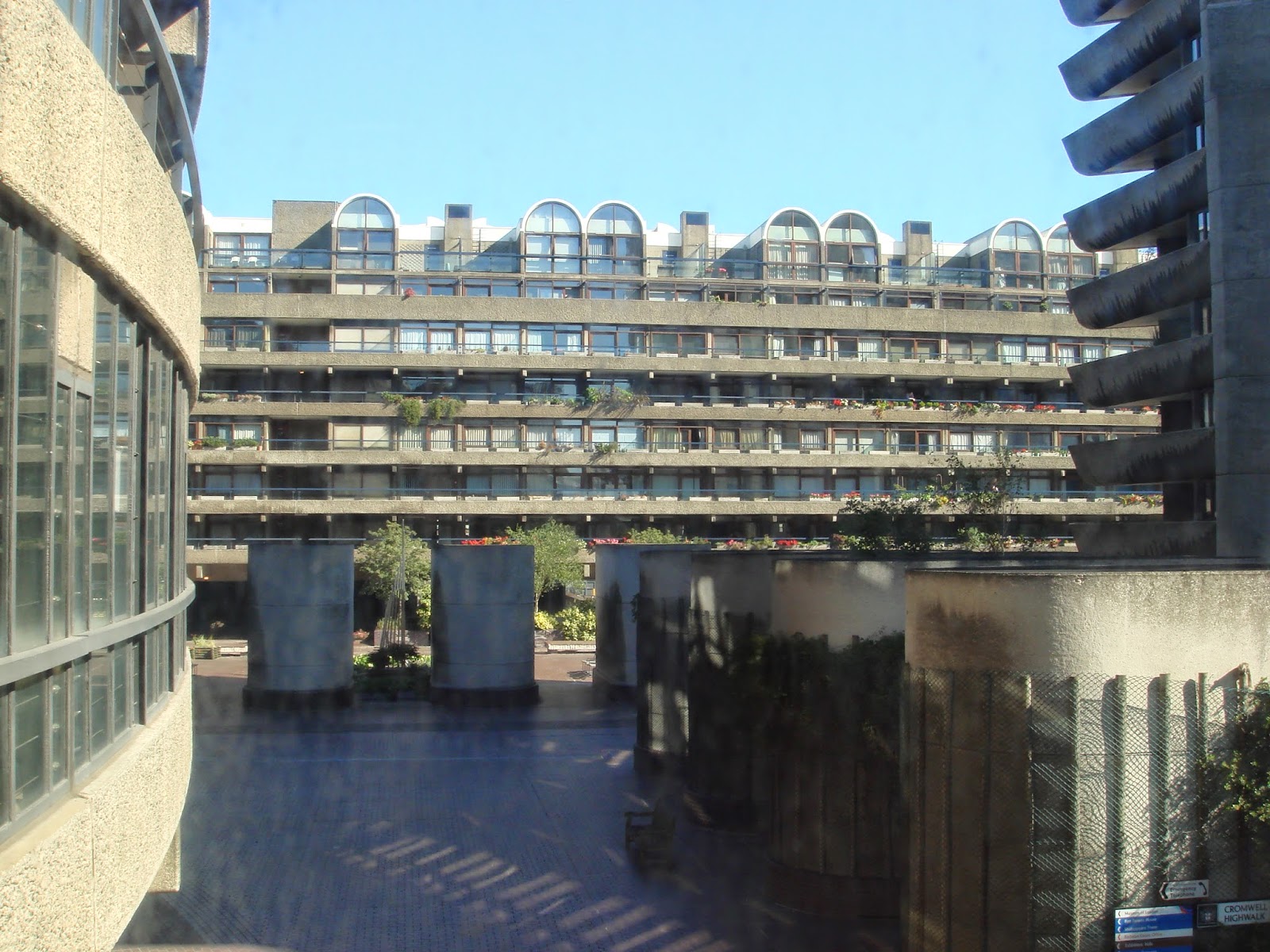 There's a very pretty stretch of water there with fountains and greenery which help to soften the harshness of the concrete structure (well, a bit). 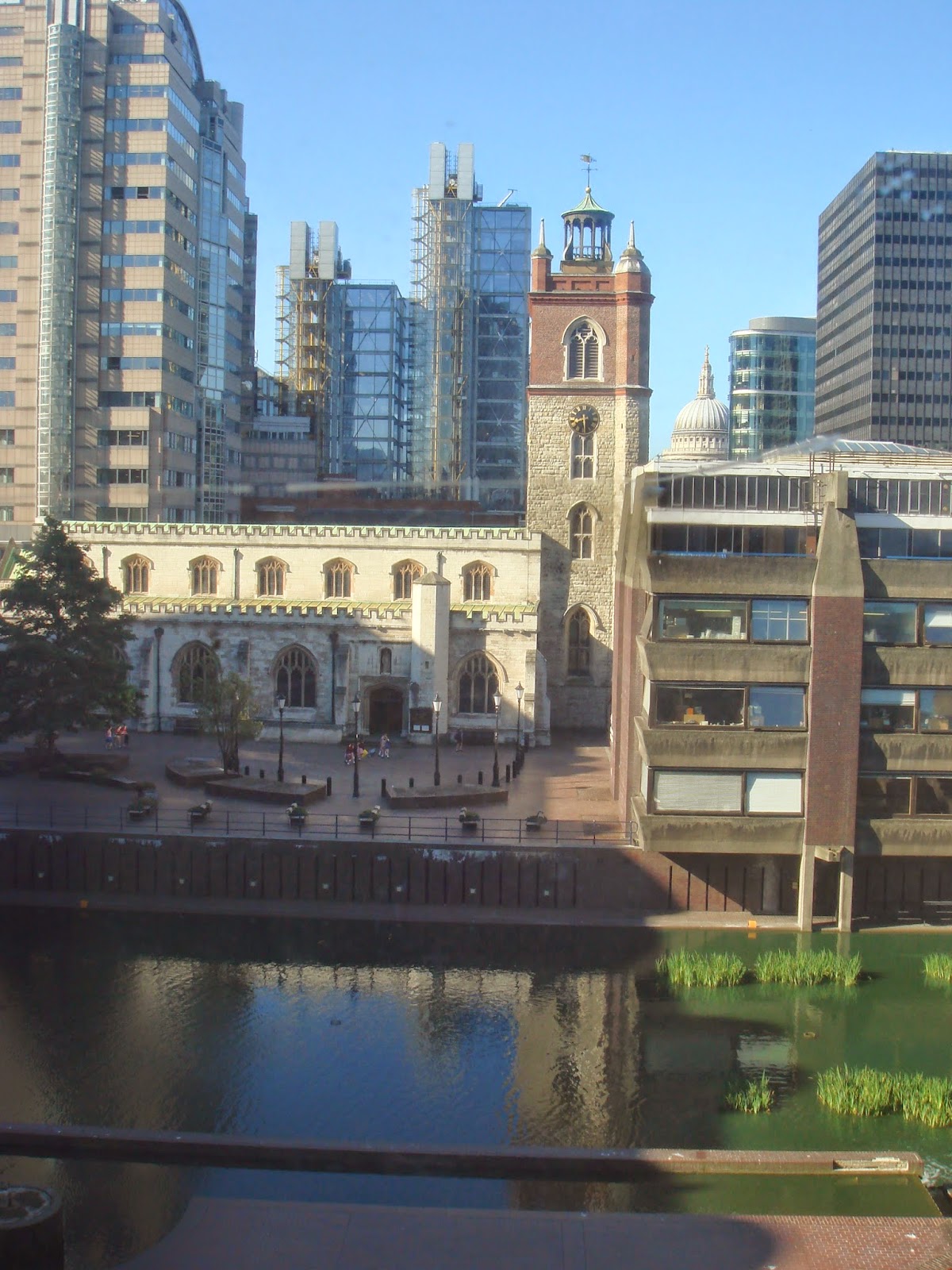 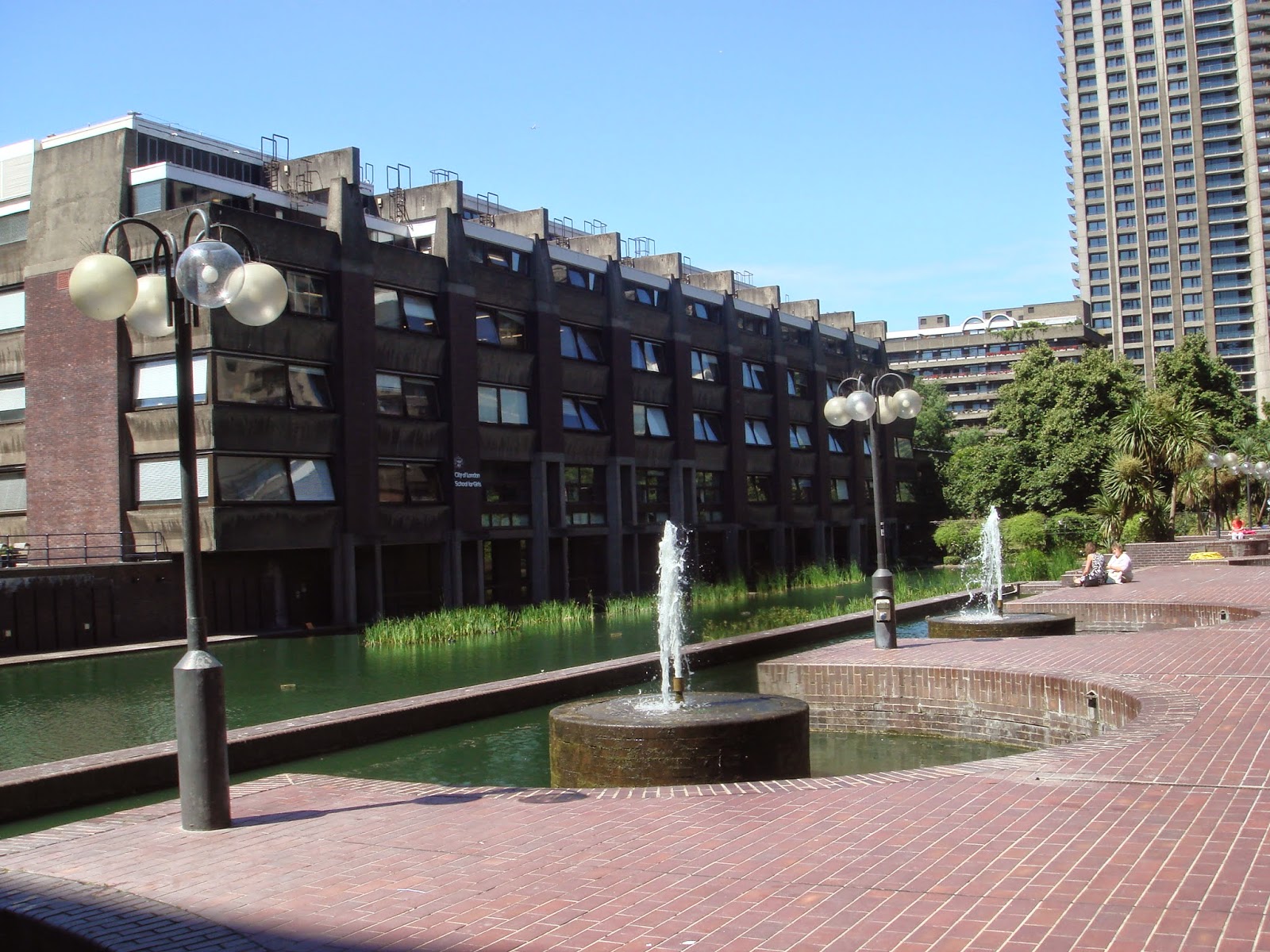 Then I headed back inside to find more delegates had arrived so there were people to chat with. 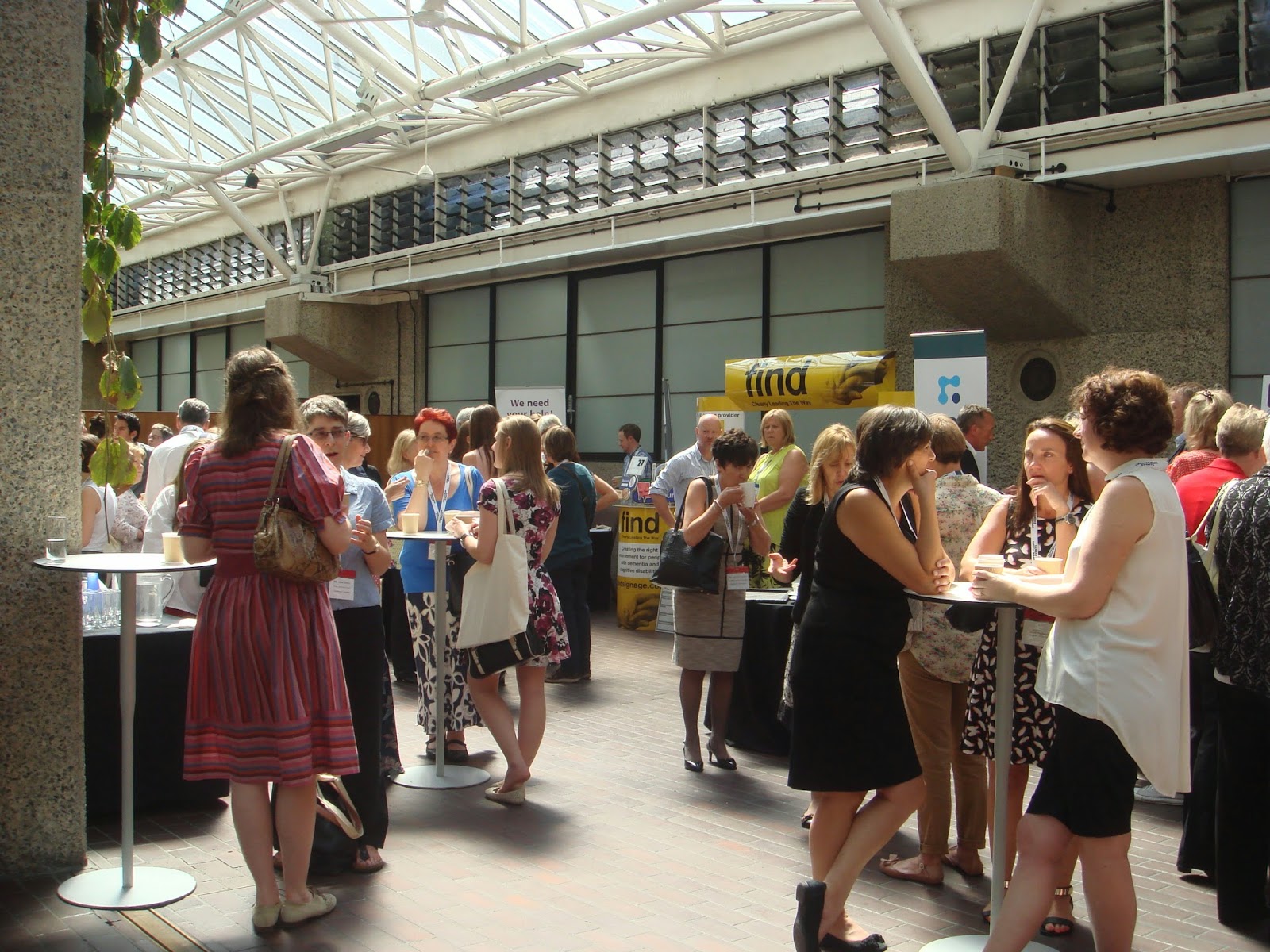 I had a lovely chat with Suzy Webster whose mother is in the early stages of dementia. She lives in an inter-generational household consisting of her parents together with herself and her family which is the best ever arrangement.

We discussed how things have changed, for the better, since I was a carer all those years ago. Mike and I had no outside help whatsoever and were just left to get on with things. Which is exactly what we did and it's gratifying to hear that nowadays many of the things we did instinctively are now part of mainstream care.

I firmly believe that we managed to keep mum mentally engaged and physically active for much longer for several reasons; she lived with us (this has to be better than living alone or in a care home), Mike worked from home and so there was music in the house all the time (now there are music/singing groups for people with dementia), we played lots of games such as scrabble/jigsaws/word puzzles/cards (the experts now stress how important it is to keep mentally active) mum still helped out around the house and garden for as long as she could and we had a mix of people of all ages visiting us and we went out visiting gardens/museums etc for as long as possible. The other thing I always did was to make sure mum had lots of time outdoors, or sitting by a window if the weather was bad, as one of things the experts say now is that often the lack of sleep in the elderly is caused by not getting enough sunlight because they stay indoors all the time.

The keynote address was given by Baroness Sally Greengross who hosted the event I attended at the  House of Lords earlier in the year. She's an exceptional lady and totally committed to this cause and we had a lovely chat beforehand. Next up was Matt from ARUK which outlined the latest developments in dementia research and talked about their £100m fund-raising plan.

Then it was my turn. We were each allotted 15 minutes but as Matt went over I did too (only a bit mind!). I know from experience that I can talk about dementia and what happened to mum without stopping for 45 minutes so I have to really focus on what I want to say in each different talk. This time it was more about the care side of things and how I felt that our more holistic approach kept her engaged for much longer.

I also added in some things I don't usually talk about because they are too painful and just hoped that I would be able to speak about them without crying. I did get a bit wobbly on a couple of occasions but at least I managed to get the words out.

As always, I was introduced, by Alexis, as the 'extreme knitting redhead' and so I ended with the story of why I do my silly stunts. My talk was followed by Martin Orrell who cleverly introduced the word 'knitting', 'knit' or knitted' into his presentation!

After his talk there was a coffee break and I had a chat with several delegates, one of whom was Sean Bone-Knell who is Director of Operations with Kent Fire and Rescue. His father suffers from dementia and so he was particularly interested in mum's story. He also told me how he is trying to educate the fire service personnel in what it's like to live with dementia as apparently they have seen fires caused by people being forgetful or not being able to think through a problem correctly. An example he gave was an elderly lady who didn't have any matches when she went to light the fire and so used some paper to get a light from the gas stove and then walked through the house with the piece of flaming paper, dropped it and caused a fire. He asked if I'd be willing to talk to groups of fire service personnel in my area if he could organise it so of course I said yes and we exchanged our contact details.

I couldn't stay for the afternoon session so I headed for home. By that time it was really hot and I was very glad I was wearing a sleeveless dress.

As I walked over London Bridge the tide was low and you could see the banks of the River Thames. 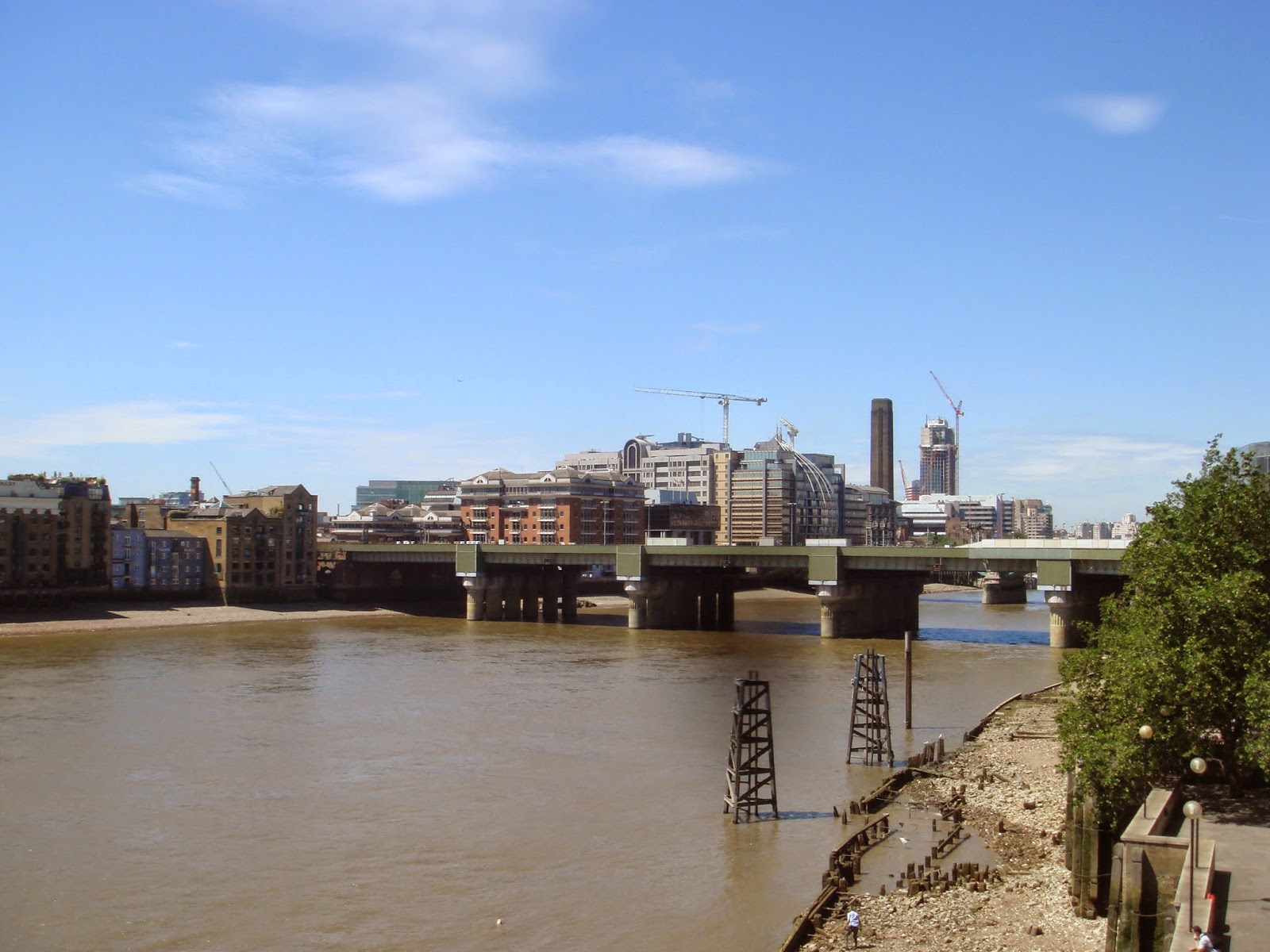 In this next photo you can see a ship, or more specifically a galleon. It's a replica of the Golden Hind, captained by Sir Francis Drake. On the corner next to it you can see lots of people enjoying the sunshine outside a pub whose name I can't remember (the Ship Inn?, Doggetts?) which is really annoying as it was a meeting point for me and a friend as it was halfway between our respective offices! 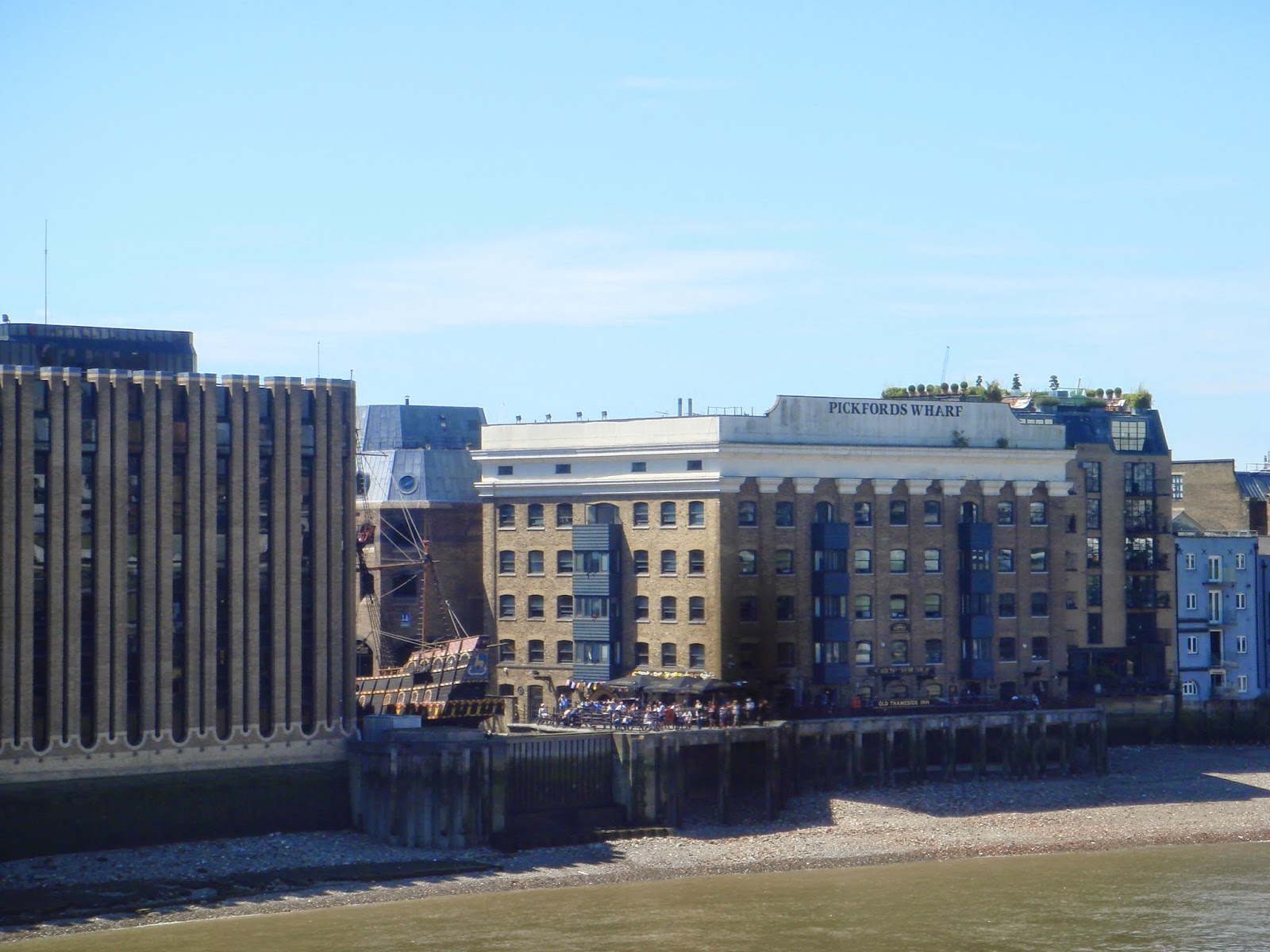 As I walked towards the station I spotted an ice cream van so made a short detour to grab a gloriously lush strawberry ice cream before I headed off for the train home.
Posted by Susie Hewer at 11:18 PM