Nellie and a mandala

She's finished and she's so sweet!

Before I show the finished Nellie I need to mention her trunk. I really didn't like the way the end of the trunk was finished. I looked at all those on Ravelry, including the ones where people had chosen to turn  the trunk up rather than downwards and inwards, and the more I looked the more I didn't want my Nellie to have a trunk like that.

Sorry this is out of focus but you'll get the idea. You see the end of the trunk is made using a pentagon motif which is the same size as the penultimate one. However, the 2 smaller ends are joined together which leaves a lot of bulk at the other end. The instructions said to gather it and sew it underneath which I did but I really didn't like it. 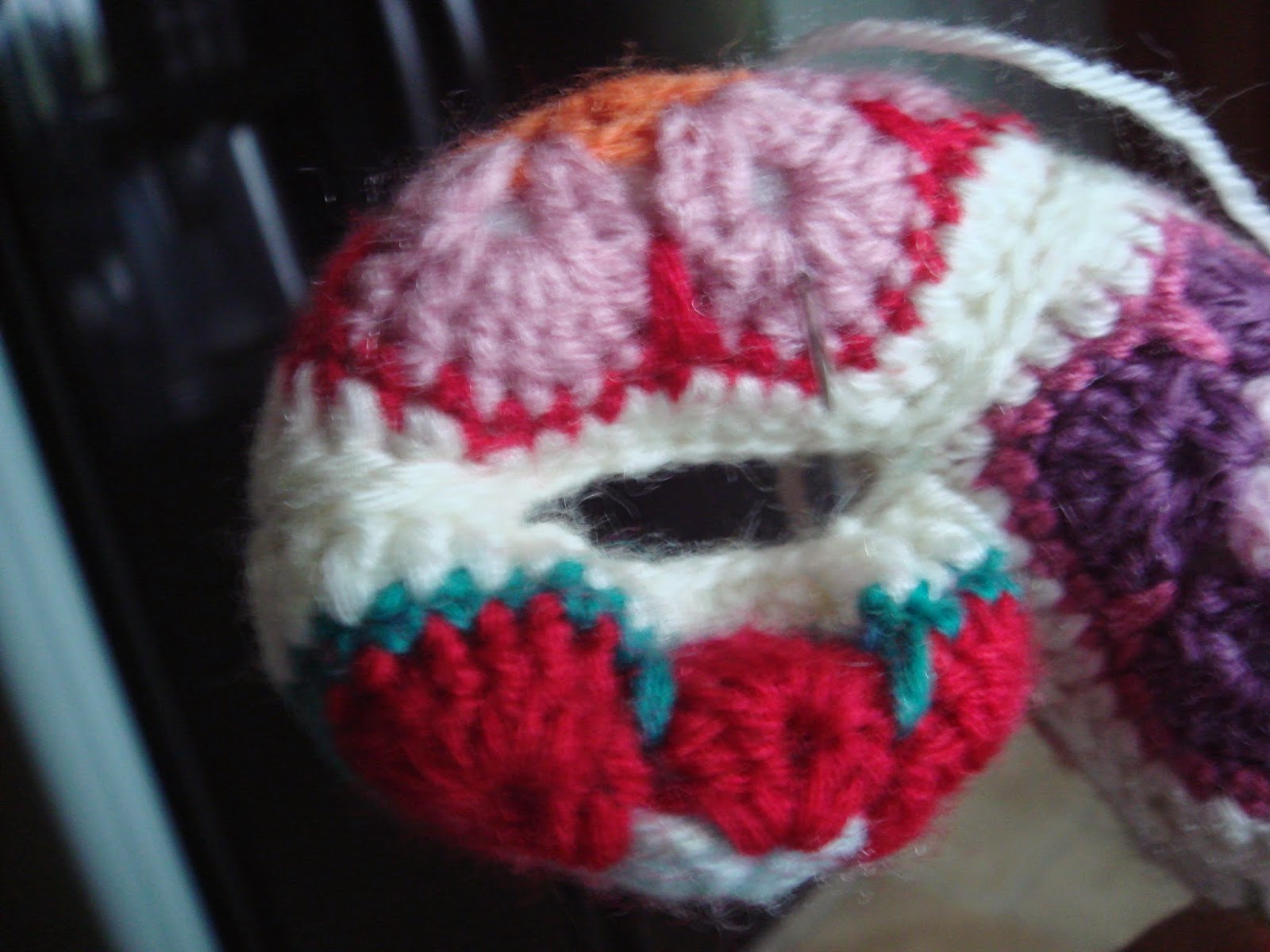 Nor did I like the bit where the 2 end pentagons joined as the join went in and then the end of the trunk inevitably flared out again and looked odd to my eye. 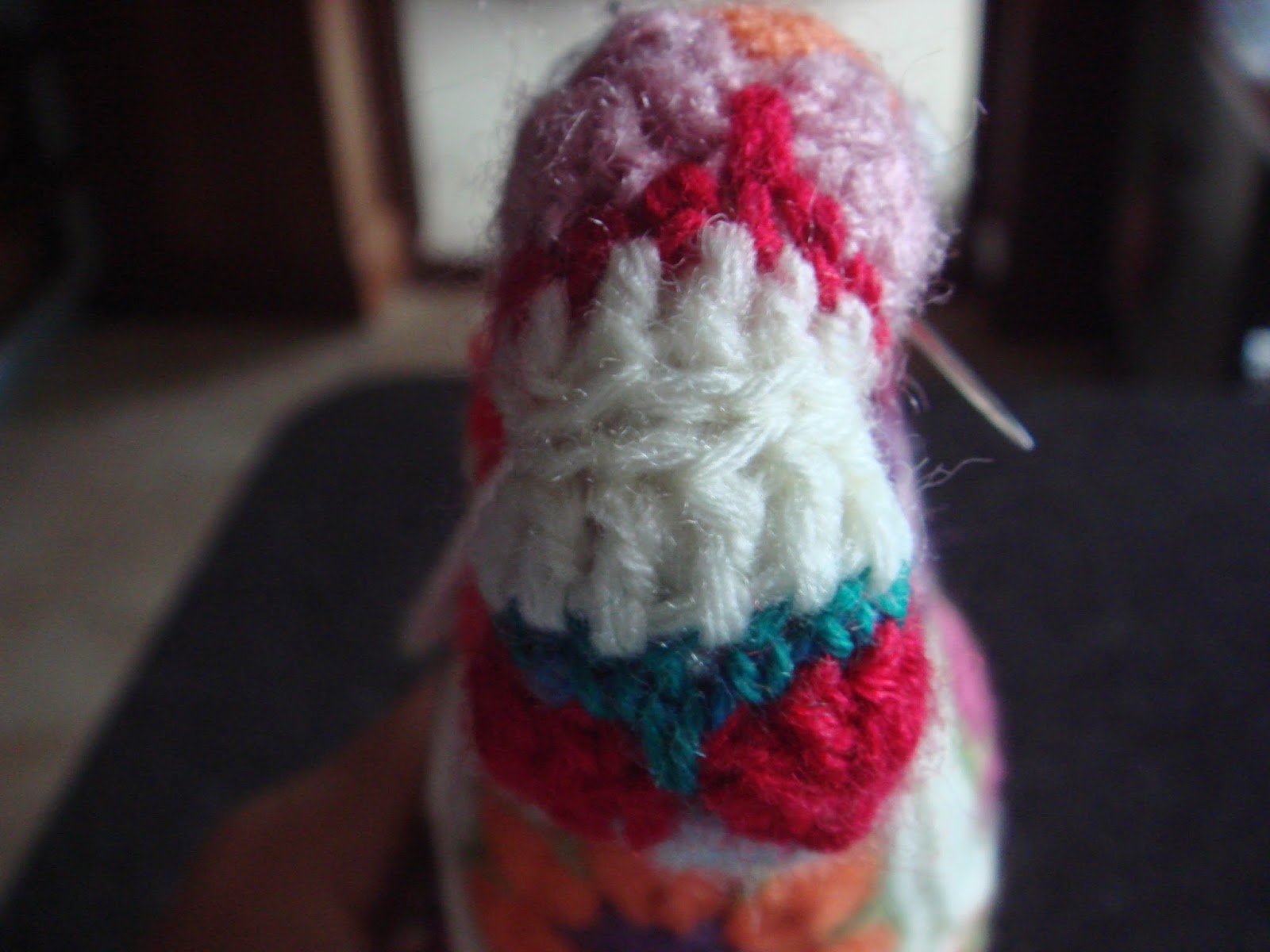 I spent ages trying to find the solution and in the end it was obvious - take off the end pentagon. Eureka!

So here she is in all her african flower loveliness: 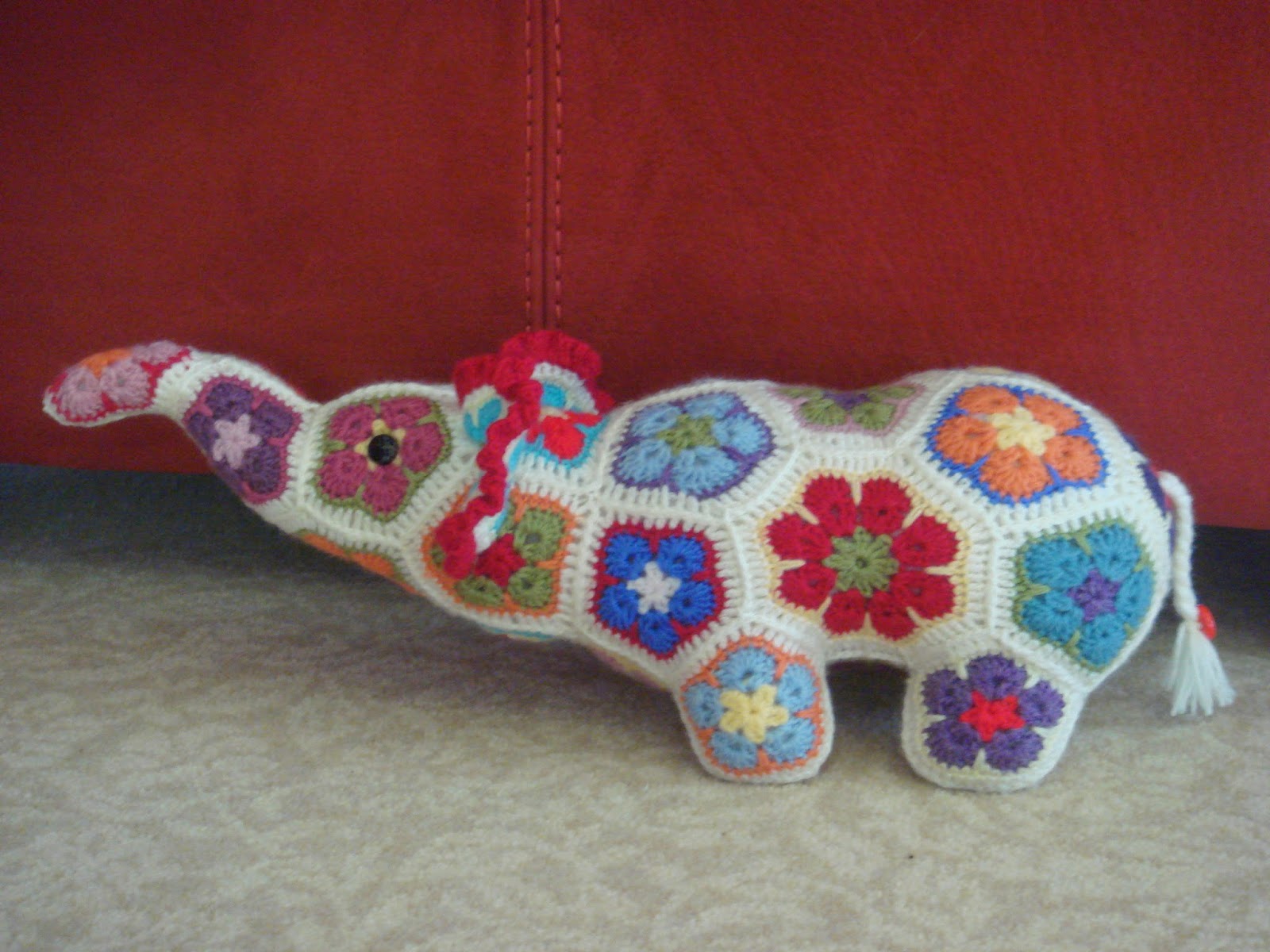 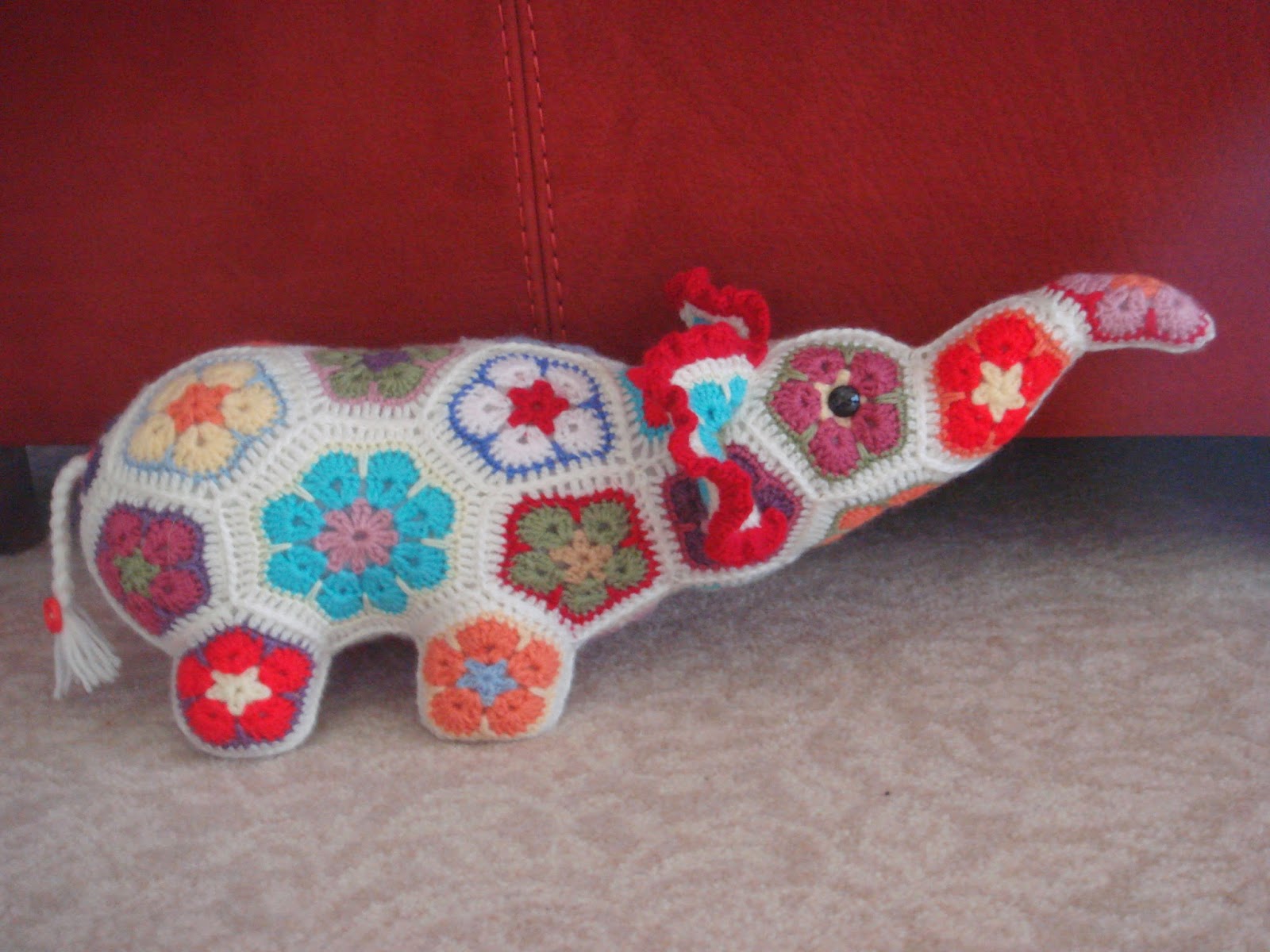 The other thing I finished off today was the mandala idea for Yarndale. After much fiddling and undoing I finally made the border I wanted.

I wanted it to have the suggestion of bicycle wheels (to fit in with Lucy's theme for Yarndale) so the edge had to have spokes of some sort and the way I chose was to just finish it off with a bit of overlay crochet over the last few rows.

Here it is in its unblocked form. It measures 7" so is just right. I'll take another photo when it's been blocked and stiffened which will make a huge difference to its appearance. 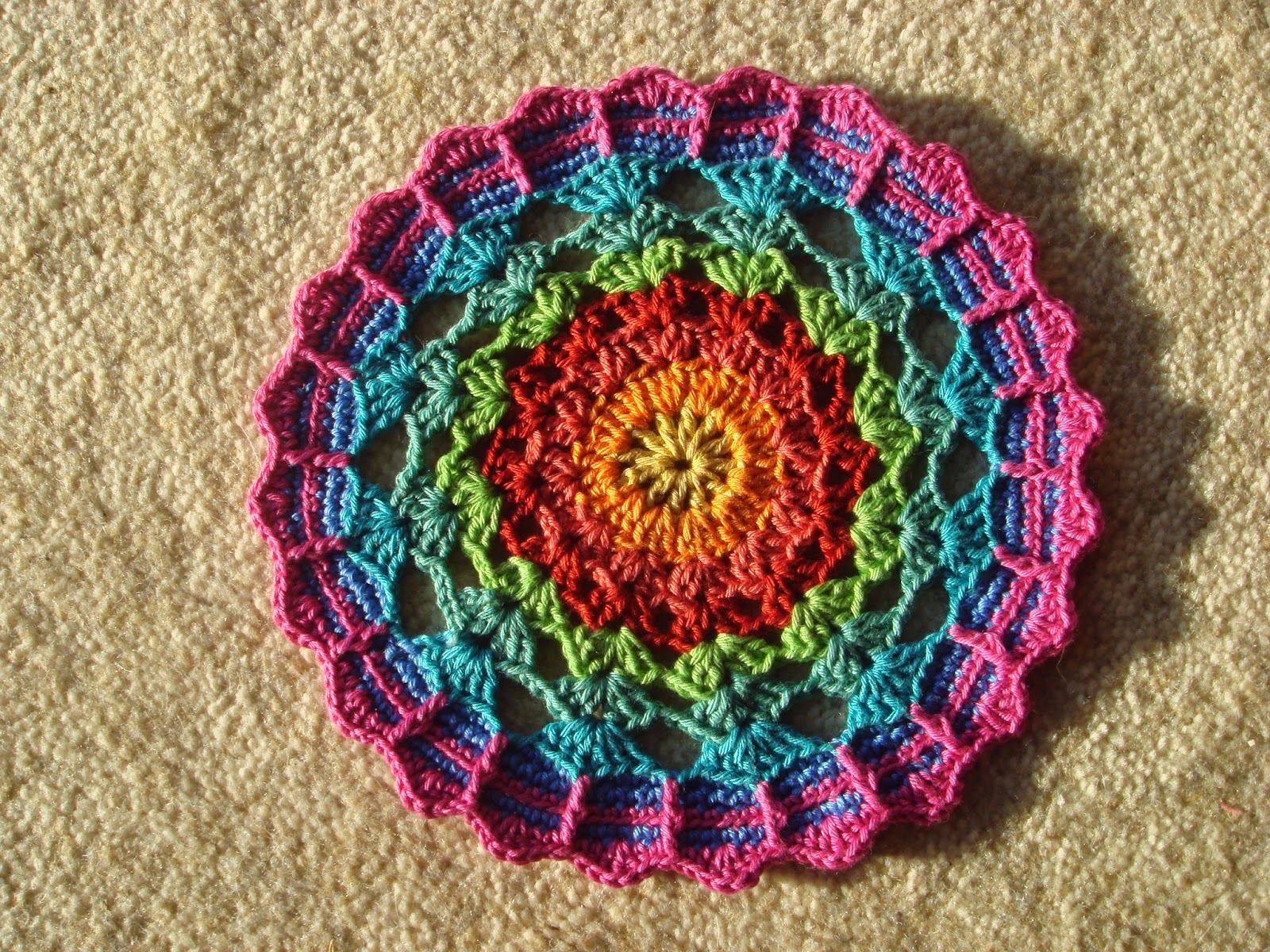 I'm off into London again today for a meeting with DeNDRoN where we'll be getting an update on the new website we've been working on which will allow people to sign-up to take part in dementia research.

We've been working on this project for so many years that I can hardly believe it's happening. All very exciting.

Nellie is gorgeous!! Really stunning and so cute! and I really love the mandala design and the colours you've used :)