The snow melted but now it's back with a vengeance. We nipped out to get a Christmas tree on Friday. It was sunny and bright but when we started heading home there were a few small flakes of snow falling.

Mike said "Never mind, at least we'll get home before it gets too heavy". Remember those words! We were 4 miles from home at that point.

1/2 a mile later the sky was black and the snow was falling so fast you couldn't see beyond the car bonnet. We crawled along until we reached Staplecross and turned to go down the hill and joined the queue of cars. It's a steep hill and there were vehicles trying to get up it - cars sliding backwards, a lorry on the wrong side of the road with its wheels spinning, more cars sitting waiting for them to get out of the way before they attempted to get up the hill themselves.

The only thing to do was to park up and walk home across the fields, which we did accompanied by our neighbour and her 2 small boys who thought it was a great adventure. We didn't want to leave the Christmas tree on the back seat of the car so Mike carried it all the way home (just over a mile). Thank goodness we didn't buy a tall one! 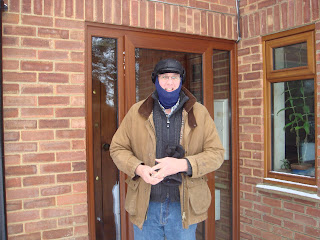 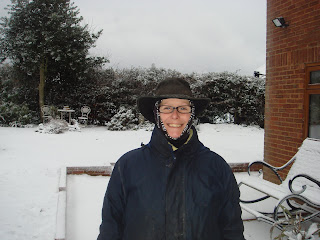 These photos were taken just before we set out to collect the car the next morning.

We planned to walk across the fields to the road to see if the road had been cleared at all and thankfully people had been out putting grit down. We now have yellow grit bins at the side of the road which makes such a difference on our steep lanes. Apparently, someone had kindly brought out their tractor and had pulled people up the hill so no-one was left stranded. It was rather scary when we got onto our lane as that was slippery but we managed to get back in one piece. This time, the snow came down after we got home so it was a day for bedding in and decorating the tree.

I'm wearing my new Fetch 'buff' underneath my hat and it was really snug and warm. When running, I've worn it instead of a hat and have worn it around my neck and I love it already.

It was supposed the be the Christmas Pudding Dash on Saturday but that had to be re-scheduled for 29th December. I don't think my Ms Santa costume will be appropriate then so will have to find something else!

Needless to say that running has been confined to the treadmill for the past couple of days but I might sneak out tomorrow if it isn't slippery underfoot. Perhaps a xc plod around the orchards as I know what the terrain is like underfoot.

One thing I have noticed is that my legs are aching from walking in the snow. It must be because you have to lift your feet up to get through the snow. It's been jolly hard pushing my wheelbarrow through the snow to the horses too!
Posted by Susie Hewer at 5:37 AM