Two it is then 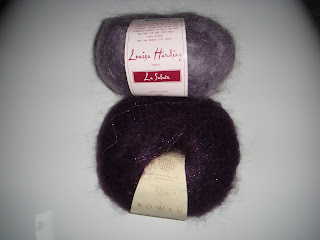 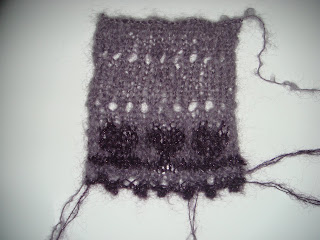 I finally decided on the Louisa Harding tunic/dress named Two as I already had the La Salute yarn in my collection. The other reason is it features hearts which I love.

A lot of my craftwork features heart motifs so we have crochet, knitted, wicker, pottery, fabric and embroidered hearts all over the place!

I also found some beautiful Rowan Kidsilk Night which is a deep blackcurrant shade with some shimmery glitter.

I love anything sparkly and I love mohair, although I know that isn't everyone's favourite yarn to knit with because it's not easy to frog.

The La Salute is a dusky mauve rather than the grey tone as it appears in the photo.

I just did a little swatch to check out the pattern etc and see if I want to make any changes. In the pattern the hearts don't sit directly on the stripe but I just wanted to see how the hearts worked out.

I think I shall put another line of the Kidsilk Night above the hearts to make it into a band and to get it some more texture - the stripe is knit in 2 rows of garter stitch which gives nice definition.

I shall also make the whole dress slightly shorter, turning it into a tunic as I don't think a mini dress would look too good on someone of my advanced years!

I'm just off out for my last run of 2010. It will be a 'tempo' run which means I start slowly and then gradually increase the pace when I've warmed up, then slow back down again. I shall have to do some hard work over the coming weeks as I'm feeling very lardy after the excesses of Christmas!
Posted by Susie Hewer at 2:10 AM