So off we went to the London marathon exhibition at the ExCel centre in Docklands.  The weather was fine and it was a nice walk to the tube station at St James's Park.

On the way we snapped things that caught our eye:

This striking statue of Henry Purcell, the 17th century composer of so much wonderful music, was on the edge of Christchurch Gardens.  I thought the face looked very feminine and I wasn't sure why he had flowers on his head so on closer examination I found that the statue is entitled The Flowering of the English Baroque and that it was created by the sculptor Glynn Williams on the tercentenary of Purcell's death in 1995.  It's in the form of the 'green man' carving found in churches and the flowers intertwined with cubist representations of instruments represent the ideas flowing out of his head.  Aha, now it makes sense!

This wonderful old pub is The Albert which is described as the most photographed pub in London, probably because of it's position between the 2 glass monoliths. 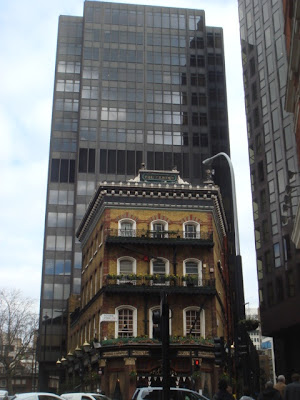 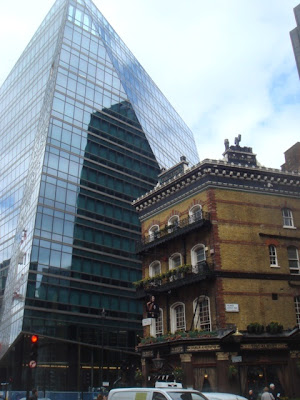 A few stops on the tube and we reached Tower Gateway where we caught the Docklands Light Railway to the ExCeL centre.  Thankfully it wasn't too busy so we literally picked up my running number and chip, dashed through the exhibition (with no time to browse the stands), pick up my goody bag at the exit and then grab a bite to eat.


I have to mention Mike at this stage because he was simply the best supporter in the world.  He organised everything on the day for me so I didn't need to worry about timings/trains etc, he calmed my nerves when the need arose and he hung around waiting patiently whilst I did interviews and took loads of photos.  Thanks love, you're a star!


On the way back we were right at the front of the train and I took this photo because it felt rather surreal to be at the front but with no driver.


On the way to Tower Bridge I had a couple of phonecalls requesting interviews, one of which, for the Independent newspaper,  I did on the concourse at Tower Gateway - how glamourous.

The hotel where the photo-shoot for Virgin London Marathon and the Guinness World Records press conference is held in a hotel right by Tower Bridge which is such an amazing structure.  I have a fondness for it as I used to work quite nearby when I worked in London many years ago.