We arrived at the Tower Hotel just in time for me to get changed into my running kit.  The VLM press team take over a whole suite on the first floor of the hotel each year.  You need a special pass to get in and you walk through a sea of reporters and photographers either eating their lunch or uploading stuff onto their laptops etc.

There's always a lot of hanging around at this sort of thing so there's plenty of time to get organised and chat with fellow nutters, sorry I mean runners, hoping to get a Guinness World Record.  I feel very fortunate to have been chosen for the press conference again as there were over 70 hopefuls attempting their own special record.  I think that being a bit quirky helps!

As I've done this several times before I know a lot of the VLM media team.  This is Fran who was one of the first people I met back in 2007 when I first did my running and knitting.  She's great at attracting publicity.

When everyone had donned their costume and attached their fake numbers it was time to go outside and meet the photographers.

See Mark standing on my left, he was attempting to break the record for fastest marathon on crutches.  Not because he uses crutches all the time but because a couple of weeks ago he developed a stress fracture whilst training but decided to go ahead with the marathon anyway but on crutches.  Nutter?  I think so! 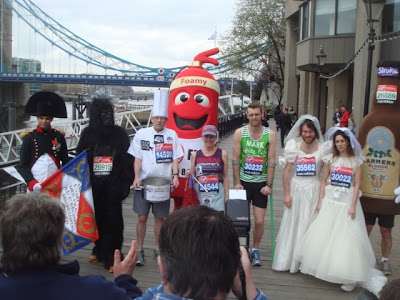 There's always plenty of standing around and waiting whilst everyone gets organised. 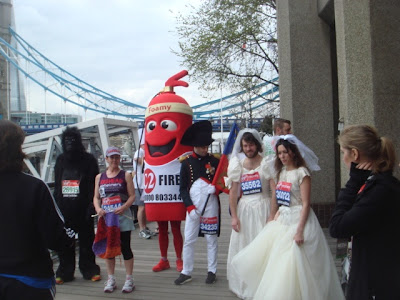 Then it's time for the traditional slow jog towards the cameras.

When the photographers are happy with the group shots we all have to line up along the railing for our individual shots.  The smiles get more and more fixed as time goes by, each photographer wanting something a little different to make their own photo stand out from the others.

The gorilla costume really freaked me out because the eyes were just dull black rubber circles and there were slits above for Bruce to peep out of.  He must have been sweltering in that suit on marathon day as it was quite hot.  The GWR rules allowed him to take his head off when he wanted a drink but he was not allowed to run without his head on (that sounds plain weird!). 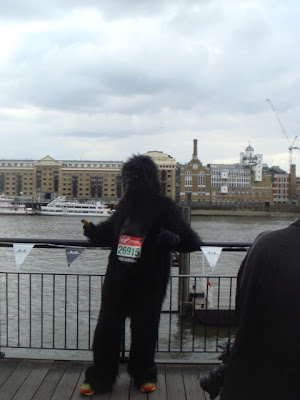 Here's Lucy in the Cancer Research UK shoe mascot.  She's really tiny and the tongue of the shoe came halfway up her face! 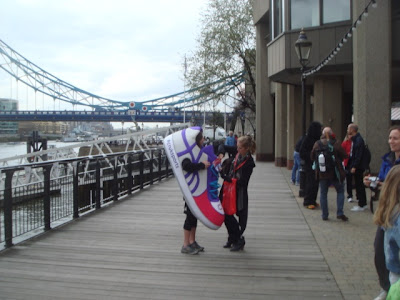 Olivier, a real Frenchman, had a wonderful costume which was an exact replica of the original worn by Napoleon, even down to the medals on display.  He was also carrying his medal from the Boston marathon last year which I thought was a nice touch.

There was one person missing from the GWR team this year, the lovely  Amarilis, seen here on the left: 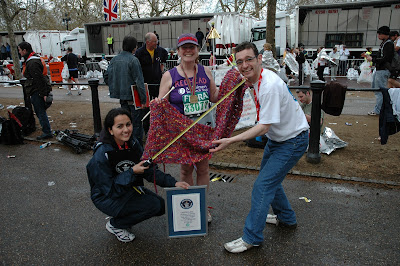 She's away on maternity leave having recently has a baby girl so I crocheted some of the cute little crocodile stitch baby bootees and gave them to Damien to pass on to her. 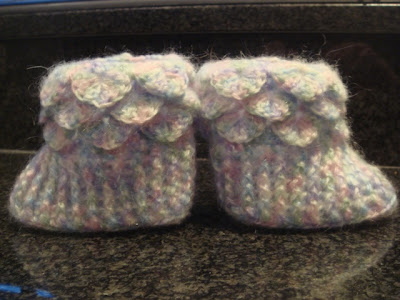 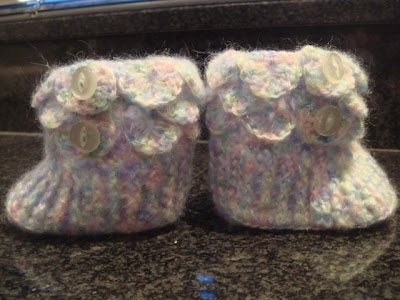 Once the photos were all done it was time for the press conference so we all trailed back inside, had microphones attached and went to face the questions.

What made me a bit giggly was that all the others were going for the fastest time dressed as something and they were all really speedy runners; for example, Lucy in the shoe has a marathon pb of 2:59!  Then there was me, a silly middle-aged woman toddling round really slowly doing her knitting.

I laughed when I heard all their speedy times and said proudly that I'd got my own fastest ever pb of 4:48:29 last week at the Brighton marathon but that even the slowest of the other runners would be faster than me when wearing their costume!

We each had our own story, our own reasons for running and our own charity to support.  I loved what Napoleon said when asked why he chose to run the London marathon in a costume - he said there are 2 ways to run London, either you're a Kenyan, or you wear a costume!

There were lots of good questions directed at me - why did I choose knitting, who am I running for and why, how is my knitting whilst running monitored?  Apparently a lot of this was shown on the morning of the marathon.

Finally the session ended and we all went our separate ways.  The next time we met was at the start on marathon day.

Whilst I was in the conference Mike had been for a wander along the Thames and he was waiting for me in the hotel Reception.  We had a lovely walk back along the River Thames to Charing Cross station before heading for home - we were ready for a glass of wine when we finally arrived home!